Raman Kashyap's family has also alleged that he died due to negligence and that the police failed in its duty to rush him quickly to a hospital.

Raman Kashyap's wife Aradhana holds up a photograph of the journalist on her phone. Photo: Ismat Ara/The Wire

Nighasan, Lakhimpur Kheri: Sitting on a cot in his house, Ram Dulare Kashyap reads the newspaper which contains details on the death of his 35-year-old son, Raman. It is the morning of Tuesday, October 5.

As the internet remains shut for the third consecutive day in Lakhimpur Kheri district, in the aftermath of the violence on Sunday that took the lives of eight people, Ram Dulare is irked that he is unable to send photos of his son’s last rites to relatives. The internet was restored only on Tuesday evening.

The last rites took place on Monday, October 4, at around 4 pm, after the post-mortem was concluded at the local district hospital. The report says that the area is finally peaceful after farmers ended their protests and agreed to perform the last rites of the deceased farmers.

This came after Union minister Ajay Kumar Mishra’s son, Ashish, whom the farmers have held responsible for the violence, and others, were booked by the police.

The Uttar Pradesh police registered an FIR on the basis of a farmer’s complaint, and named Ashish and others in connection with offences under 22 sections, including murder and criminal conspiracy.

A small blurb on the corner reads, “Eight people lost their lives in the violence.”

Ram Dulare says that even though he and his two other sons are farmers, his deceased son should not be treated the same as the others who lost their lives during the violence because Raman was a journalist.

“He was not there to protest, or support anybody. He went there as a reporter to report the incidents. He was killed while doing his job and should be treated like that,” he stated. 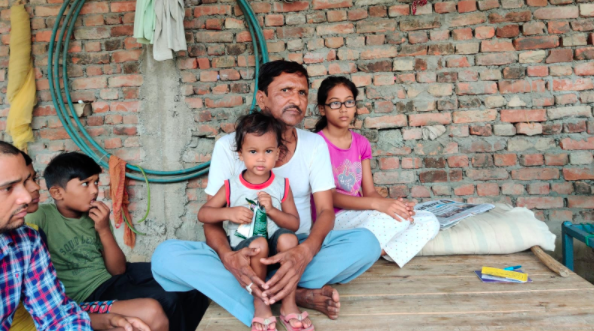 Raman Kashyap was a reporter with Sadhna news channel and had gone to Tikunia on Sunday after receiving a message on a media group. The message was an update on hundreds of farmers gathering to protest the visit of local MP and Union minister of state for home Ajay Mishra (known to his supporters as “Teni”), and UP deputy chief minister Keshav Prasad Maurya.

Mishra, in a statement on the number of BJP workers killed on Sunday, had also included Kashyap in the list.

Locals at the site of the violence told The Wire that a programme called ‘Dangal’ is held every year in October to honour Mishra’s deceased father.

Farmers have alleged that Mishra’s son, Ashish, was heading the convoy of three cars that ran over farmers, killing four and injuring several. The minister has denied the allegation and said that his son was not present at the spot where the violence occurred. Out of the eight people killed that day, four were farmers.

While there has been no official confirmation, it is being reported that the four others killed include a driver and two BJP workers who died after farmers allegedly retaliated to the protesters’ deaths and set vehicles on fire.

With no official statement yet on the deaths of non-farmers, reports also said that a ninth person had died. However, ADG (law and order) Prashant Kumar confirmed to The Wire that the actual toll was indeed eight.

On Sunday, Ram Dulare started worrying when his friends who lived nearby returned from Tikunia but Raman was nowhere to be found. His phone was switched off.

Late at night, a distressing call from the nearby police station alarmed the family. Ram Dulare, along with his two younger sons, Pawan and Rajat, one of his sons-in-law and a brother, rushed to the Lakhimpur district hospital and saw Raman’s dead body.

Pawan told The Wire that the family has submitted complaints to the local police station at Nighasan and also at Tikunia, where the incident occurred, alleging that minister Mishra’s son, Ashish, was responsible for the journalist’s death.

“Eyewitnesses said because of the coverage of the car [that mowed down farmers], the journalist was fired at and footage of the incident contains sound of the gunshots too,” said the complaint, a copy of which The Wire has obtained. The family told The Wire that Raman had severe injuries on his body and head. They are now waiting for the post mortem report. 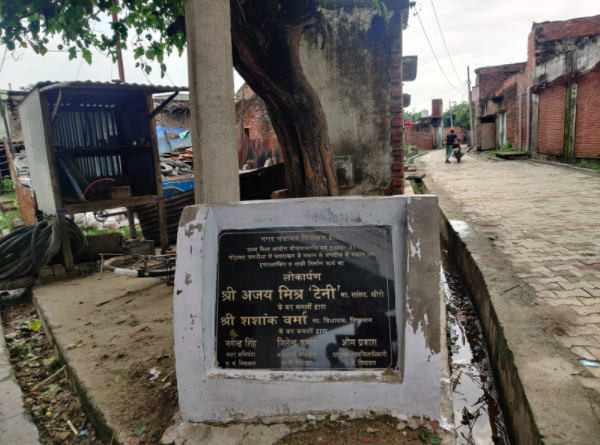 The board outside Kashyap’s house. Photo: Ismat Ara/The Wire.

Sunil Maurya, a local reporter and neighbour of Raman Kashyap in Nighasan, says he was a few hundred metres away when the violence escalated. Maurya says he could hear the sounds of the vehicles hitting the farmers.

“But the police did not do anything to stop the cars,” he says.

Surdeep Singh Channi, another journalist who runs his own digital news channel, UC News, says he was present when the vehicles rammed into people.

“I, along with a few other journalists, were covering the farmers’ protest when we suddenly saw three cars rushing towards us. The car rammed into a few people, and to save myself, I jumped to the side of the road. Because of this, I also sustained injuries,” he told The Wire.

However, immediately afterwards, he left the spot along with two injured farmers for first aid at a nearby hospital. When he returned, he could not find Raman Kashyap anywhere.

“I waited for Kashyap till evening, so we could go back home together. Later, I got the news that he had died,” he says.

Raman Kashyap leaves behind his wife, Aradhana, his three-year-old son, Abhinav, and 11-year-old daughter, Vaishnavi. He was the eldest among his two brothers and sister. Raman’s two brothers are farmers. 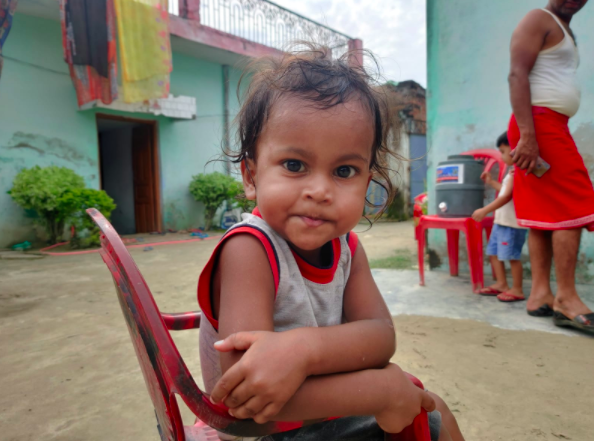 Vaishnavi, who studies in Class 6, is unconvinced that her father will not return. She looks at the cars passing by and asks her uncle, Pawan, innocently, “Is it him?”

Pawan says three-year-old Abhinav still thinks that his father is out on a short trip and will come back soon with samosas for him and his sister.

Kashyap’s family says he only joined the news channel two months ago and was also a teacher at a local school.

His friend, Umesh Pandey, says that the police were not fully prepared to handle the situation, despite indications that a lot of people were going to gather.

“One of my friends had said that there was a huge possibility of violence during the protest. If a normal person could tell that the situation can get so bad, why couldn’t the police anticipate it in advance and act accordingly?” Pawan also asks. 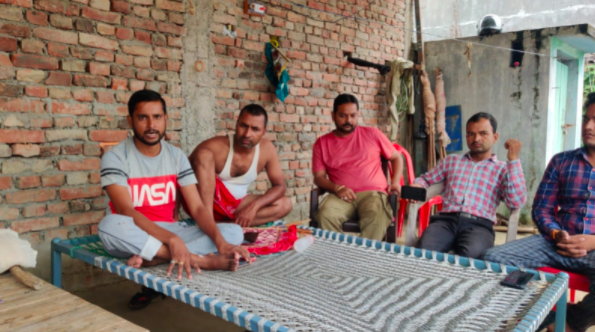 Kashyap’s family and friends. To the left is Pawan. Photo: Ismat Ara/The Wire

“Our family’s main problem is with the local Tikunia police. First, they did not do enough to ensure the safety of people who were around the area, and secondly, they did not provide first aid to my brother,” he says.

When Pawan spoke to the driver of the ambulance in which Kashyap was taken to the hospital, he learned that at least two health centres were passed before he was finally taken to a hospital.

“They spent ages just on the road, instead of getting first aid treatment for him.  I believe that my brother died due to negligence as he could not get the required medical treatment. The police were doing their duty, but could have also fulfilled their duty as human beings by helping the victims with timely medical aid,” he told The Wire.

The family has demanded that compensation of Rs 50 lakhs be paid to his family, along with a government job for Kashyap’s wife. “The SDM has told us that the administration will listen to us and help us out,” Raman’s father says.

SDM Om Prakash Gupta, when contacted by The Wire, say that they are still “waiting for directions” from the UP government before taking any steps.

“We have sent reports of the deceased and the injured from our side. No special arrangements have been made for Raman Kashyap. He will be put into the same bracket as everybody else who has lost their lives,” he says.

Pawan says that if his brother is put into the same bracket, it is unlikely that the family will receive compensation, as many farmers have lost their lives during the ongoing farmers’ protest, but none have been compensated yet.

His father too, says that his son “died a reporter,” and should be treated as such.

Ram Dulare, along with his entire family, have been BJP voters all their lives.

“We were never active campaigners for the party; we were more like silent voters. Despite being farmers, we supported the BJP silently. But we are not so sure anymore,” Ram Dulare said.

Raman Kashyap’s mother, Santoshi Devi, says that she does not know “too much” about politics. But she is clear that the programme involving the ministers should have been cancelled when it faced resistance from farmers.

“The programme could have been cancelled if the farmers had a problem with it. What was the big deal? Why put people at risk just because of a programme?” she asks.

Aradhana, Raman’s wife, is in no condition to speak. “I would not have let him go if I knew it would be so dangerous. How could I let him go into such a dangerous situation?” she asks, still in shock. 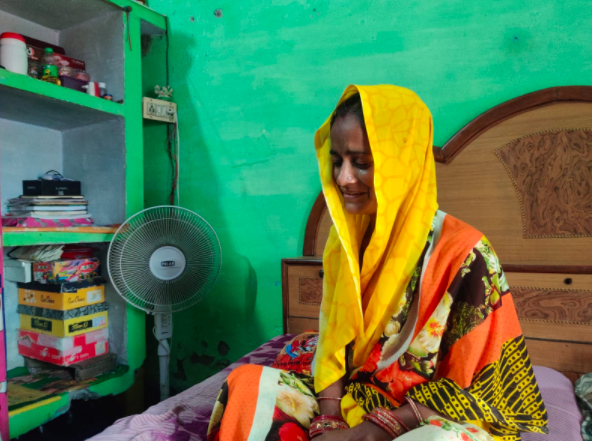 Looking at their wedding photos, Aradhana says her husband was a loving father and partner. 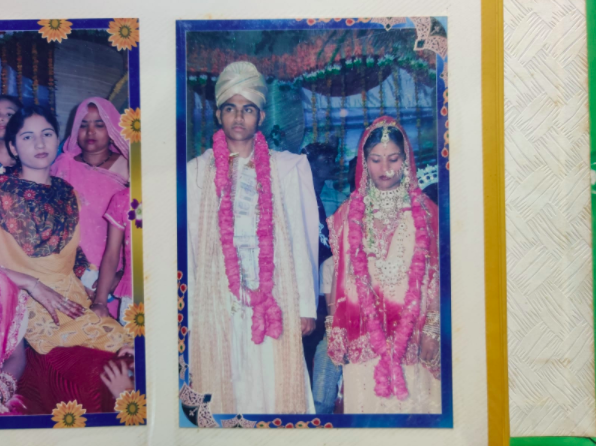 “I cooked him dal chawal, and he left for the battleground where he lost his life. If I had known that it would be the last meal he was going to have, I would have made him something better.”