The Saudi Embassy in Paris said the arrested person 'has nothing to do with the case in question.' 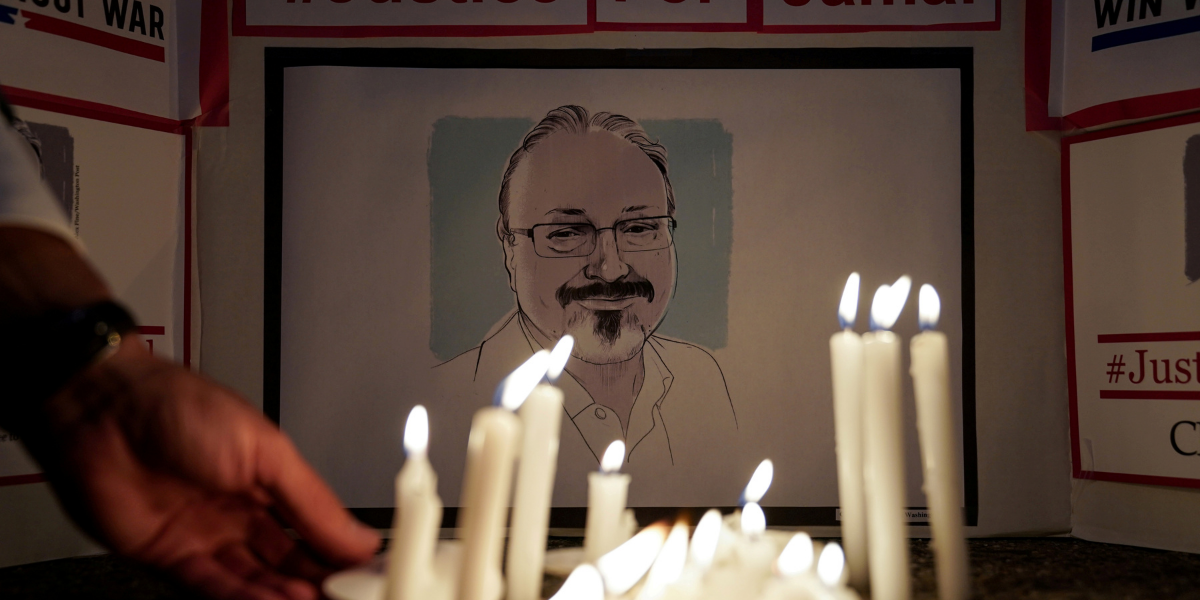 File image: The Committee to Protect Journalists and other press freedom activists hold a candlelight vigil in front of the Saudi Embassy to mark the anniversary of the killing of journalist Jamal Khashoggi at the kingdom's consulate in Istanbul, Wednesday evening in Washington, U.S., October 2, 2019. Photo: Reuters/Sarah Silbiger

Paris: French police on Tuesday arrested a suspected member of the hit squad that killed Saudi journalist Jamal Khashoggi as the man was about to board a flight from Paris to Riyadh, French law enforcement sources said.

Khashoggi‘s fiancée welcomed the detention of the suspect and said he should be prosecuted for his role in the 2018 killing. But the Saudi Embassy in Paris said the arrested person “has nothing to do with the case in question.”

“Therefore the Kingdom’s embassy expects his immediate release,” it said in a statement.

A French police source and a judicial source named the man as Khaled Aedh Al-Otaibi, the same name as a former member of the Saudi Royal Guard who is identified in U.S. and British sanctions lists, and a U.N. commissioned report, as having been involved in Khashoggi‘s killing.

The police who detained him were acting on a 2019 arrest warrant issued by Turkey, the country where Khashoggi was killed, according to the police source.

Khashoggi, a Washington Post journalist and critic of Saudi Arabia’s de facto ruler, Crown Prince Mohammed bin Salman, was last seen entering the Saudi Consulate in Istanbul on Oct. 2, 2018. Turkish officials believe his body was dismembered and removed. His remains have not been found.

A U.S. intelligence report released in March this year said Prince Mohammed had approved the operation to kill or capture Khashoggi. The Saudi government has denied any involvement by the crown prince and rejected the report’s findings.

Last year, a Saudi court jailed eight people for between seven and 20 years over the killing, but none of the defendants was named. The trial was criticised by a U.N. official and human rights campaigners who said the masterminds of the murder remained free.

“This could be a major breakthrough in the quest for justice for Jamal Khashoggi,” former U.N. investigator Agnes Callamard said of the Paris detention.

In her 2019 report for the United Nations, Callamard named Al-Otaibi as being part of a Saudi team that killed Khashoggi and dismembered his body before flying back to Saudi Arabia.

Callamard, now head of rights group Amnesty International, said more confirmation was required to prove that the man held in France is the same person she identified in her report.

The police source said the detained man was being held at a border police detention facility at Charles de Gaulle airport, near Paris, and would be taken to court in the centre of the city on Wednesday morning for a hearing on his extradition to Turkey.

Watch | Did Pegasus Play a Role in the Jamal Khashoggi Case?

It was unclear how or when Al-Otaibi arrived in France.

The French Interior Ministry declined to comment. Turkish officials said they were waiting for confirmation of the detained man’s identity.

A Saudi official told Reuters that “media reports suggesting that a person who was implicated in the crime against Saudi citizen Jamal Khashoggi has been arrested in France are false.”

“This is a case of mistaken identity. Those convicted of the crime are currently serving their sentences in Saudi Arabia.”

Khashoggi‘s fiancée, Hatice Cengiz, said on Twitter: “I welcome the arrest today of one of Jamal’s killers today in France.”

“France should try him for his crime, or extradite him to a country able and willing to genuinely investigate and prosecute him as well as the person who gave the order to murder Jamal,” Cengiz said.

I welcome the arrest of one of Jamal’s killers today in #France. France should try him for his crime, or extradite him to a country able and willing to genuinely investigate and prosecute him as well as the person who gave the order to murder Jamal. https://t.co/naqzfujCsp

The 2019 report compiled by Callamard said Al-Otaibi was a member of a 15-man Saudi team involved in killing Khashoggi after the journalist went to the consulate to obtain a document to allow him to marry his fiancée.

A report by Britain’s Office of Financial Sanctions Implementation said Al-Otaibi was “involved in the concealment of evidence at the Saudi General Consul’s residence following the killing.” A U.S. Treasury Department report named Al-Otaibi as among those involved in Khashoggi‘s killing.