Patna (Bihar): Buxar-based journalist Umesh Pandey is facing threats and a police case for publishing a news report that said Union minister Ashwini Choubey had on May 15 relaunched old ambulances with new posters.

Umesh Pandey said that a Bharatiya Janata Party (BJP) leader has threatened his family, warning him against publishing such news reports in the future. The case registered against him invokes charges such as defamation and intimidation, among others.

Pandey, 40, works as a correspondent in Buxar for the news portal ETV Bharat – a division of the multi-dimensional business conglomerate Ramoji Group. He has been associated with ETV Bharat since July 2018.

Pandey had written a series of stories which revealed that Choubey, the BJP MP from Buxar and Union minister of state for health and family welfare, was part of a programme in which old ambulances were relaunched with new posters.

He also reported that the same ambulances were “inaugurated” multiple times at different locations. Choubey even tried to send them to Bhagalpur, his home district, according to the reports. Pandey claimed that Choubey had launched the same ambulances four times.

The latest launch was done virtually on May 15 at the Buxar collectorate by Choubey. This revelation went viral and was shared widely on various social media platforms.

Bihar’s leader of opposition Tejashwi Yadav tweeted a screenshot of the story, commenting in Hindi, “This great man is Central minister Ashwini Choubey. He brings all the ambulances, paying one day’s fare to just inaugurate them. After the inauguration, the owner drives back it. After one year again he brings them and inaugurates them.”

It seems the latest story has irked the BJP. The eight-page complaint letter typed in Hindi by Parshuram Chaturvedi, a BJP leader, and submitted to the Buxar town police station on May 23 detailed nine stories which were done by Umesh Pandey.

In his written complaint, Chaturvedi alleged, “Umesh Pandey through news articles and personally is threatening and mentally harassing us. He is also breaking the social fabric and creating tension among people during the COVID-19 pandemic. He is blackmailing for money and ruining the image of the state government, Central government and minister Ashwini Choubey.”

They revolve around six ambulances which were given by SJVN Limited – a Central public sector enterprise under the administrative control of the Ministry of Power which is establishing a 1,320MW thermal power plant in the Chausa area of Buxar – to the district health society in March, just before the 2019 Lok Sabha elections as part of its corporate social responsibility (CSR) duties. Choubey reportedly directed authorities to redirect these ambulances to SJVN after the Lok Sabha elections.

This caused a lot of outrage, which prevented the company from taking the ambulances out of Buxar for over a year. They were kept in the Sardar Hospital’s premises. These same ambulances were launched with new posters by Choubey, the reports allege.

Police have confirmed to The Wire that a first information report (FIR) has been registered on the basis of the complaint. The FIR has been lodged under various sections of the Indian Penal Code, including defamation, criminal intimidation, public nuisance and cheating.

According to sources, Choubey had successfully lobbied to get Chaturvedi the Buxar ticket during the 2020 assembly election. He, however, lost to the Congress. Indeed, Choubey’s pressure forced the Janata Dal (United) [JD(U)] to drop its plans of giving the seat to Gupteswar Pandey, the former DGP who took voluntary retirement and joined the party.

Umesh Pandey was initially unaware of the police complaint against him.

“On May 28, I was sitting at a closed betel shop and chatting with local people when someone said that an FIR had been lodged against me in the town police station. I was surprised,” he told The Wire.

While Chaturvedi alleges that the stories were baseless and targeted the minister’s image, Umesh stands by his reporting. He said, “Whatever I have written is with proof and I am ready to fight.”

Before lodging a police complaint, Parshuram paid a visit to Pandey’s house. Umesh usually leaves around 10 am to report the news. He did so on May 20 too. When he returned in the evening, his family members looked frightened and his father told him about Parshuram’s visit. 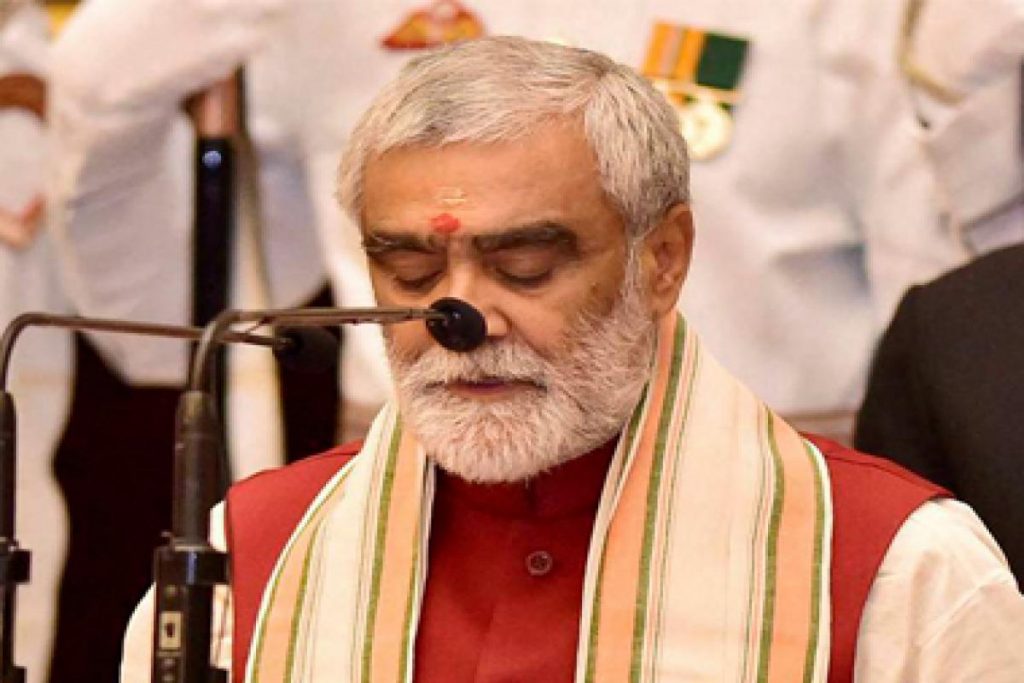 Pandey lives with his father, mother, wife and five-year-old child. “My father told me that Parshuram had come here with a gunman, though he is neither an MLA nor holds any government post. My father served him tea. He told my father that I should stop reporting about the ambulances, or things could ‘get out of hand’. He also talked about taking legal action,” Pandey told The Wire.

“My family members are scared. It was an open threat against me. They should send a legal notice to my office if they thought the news was incorrect. He should not have come to my house when I was not there nor should an FIR be lodged against me,” the journalist said.

Chaturvedi confirmed to The Wire that he had visited Pandey’s house but denied making any threats. “I just went there to make him understand that he should not do these things (write such news). I have no personal fight with him.”

“He was continuously publishing news against the party (BJP) and leader (Ashwini Choubey) and misguiding people. I advised him 20 times that if he wants to do journalism, he should remain a journalist. If you become a spokesperson of any party, then leave journalism. But he did not listen. He kept diminishing our party and our leader and Central minister Ashwiniji. So I had no other option except lodging a complaint,” Chaturvedi claimed.

The Wire asked him if Umesh Pandey had called him or any other member of his party to ask them for money, as the complaint alleges. He said, “My simple point is, why he should make baseless comments? He has threatened many times that he will run such news.” The Wire asked him why he had accused Pandey of forgery, to which Chaturvedi said, “He was making wild allegations without any proof and misguiding people. Is it not forgery?”

When asked for more information about Pandey’s alleged blackmailing, Chaturvedi disconnected the phone.

Umesh Pandey dismissed these allegations outright, saying that he repeatedly called Ashwini Choubey between May 16 and 18, but only for his comment on the report. The Union minister did not pick up the call, he said. “Then I contacted Rahul who takes his (Ashwini Choubey) photos but could not talk to Ashwini Choubey. Apart from Choubey and Rahul, I never called any BJP leader. If I have done so, then they must make those calls public,” he told The Wire.

“I believe that the FIR has been filed for reporting the wrongdoings of a public representative. My institution is standing by me.”

Umesh Pandey is yet to be questioned by the police in this case. Ranjit Kumar Sinha, in-charge of the Buxar town police station, told The Wire that the matter is under investigation. He did not offer any other information.

The FIR against Pandey is the latest in a slew of cases registered against journalists in Bihar for doing their job.

On May 25, the superintendent of the Magadh Medical College and Hospital in Gaya had lodged an FIR under the Epidemic Diseases Act against Dainik Bhaskar journalist Ranjan Sinha and his associate, accusing him of entering a COVID-19 ward.

On February 20, rumours had spread about a leak of the English exam paper during the board examinations. The education department had lodged an FIR lodged at the Kotwali Police station in Patna against two journalists who had tweeted the allegations.

Last year, state authorities had lodged a police complaint against many journalists for merely reporting on the government’s mismanagement of COVID-19.

Across the country, around 55 journalists faced arrest, registration of FIRs, summons or show-cause notices, physical assaults, alleged destruction of properties and threats for reportage on COVID-19 or exercising freedom of opinion and expression during the national lockdown from March 25 to May 31, 2020, as per a report prepared by the Rights and Risks Analysis Group (RRAG).

In the last decade, 154 journalists in India were arrested, detained, interrogated or served show-cause notices for their professional work. Sixty-seven of these instances were recorded in 2020 alone, according to a report titled ‘Behind Bars: Arrests and Detentions of Journalists in India 2010-2020’.