Misrepresenting images to further political aims is a recurring issue – and Piyush Goyal's power ministry is only the latest in a long list of those in power to do so. 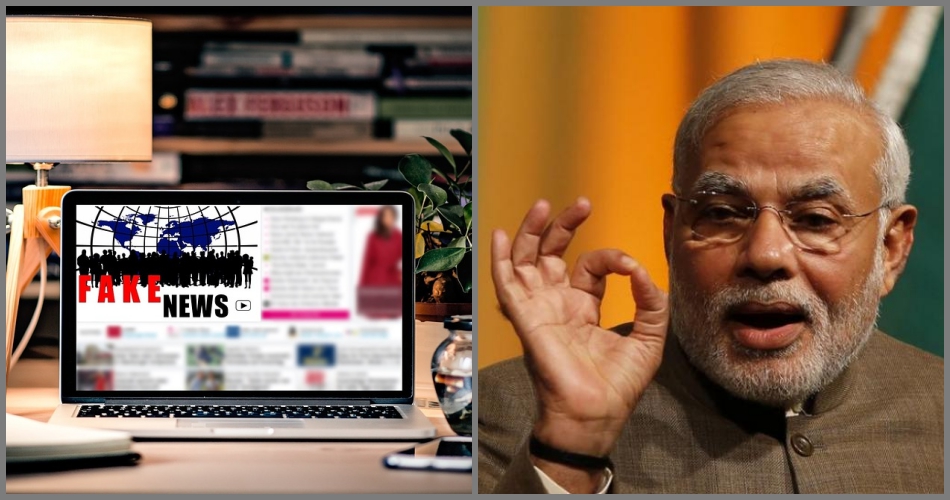 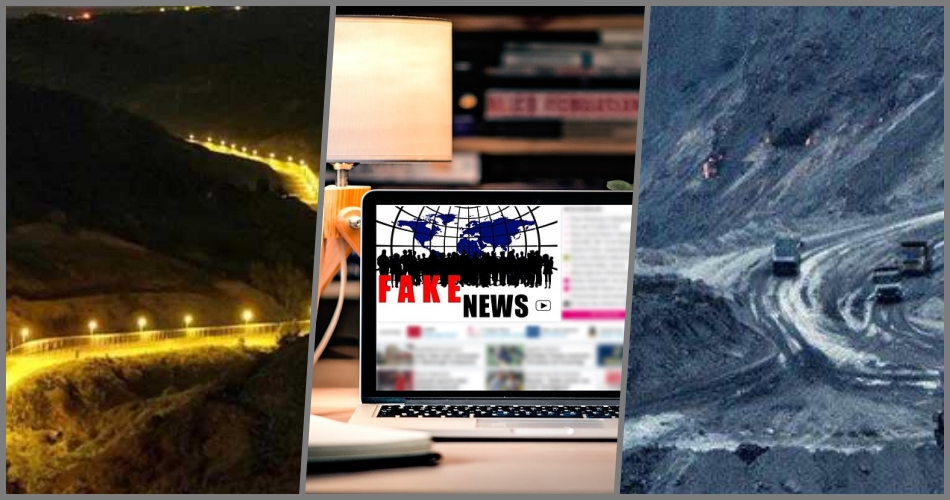 The image, which was shot by photo journalist Aruna Chandrasekhar, was commissioned by Amnesty International India for a report that highlighted how land acquisition and mining in three mines in three different states run by three different Coal India Limited (CIL) subsidiaries have breached Indian domestic laws, and India’s obligations under international human rights law.

Ironically, Goyal had claimed that the report, which was published in 2016, was completely baseless and was “floated by elements which do not want to see India’s development and prosperity”. You can read Amnesty International’s complete report here. 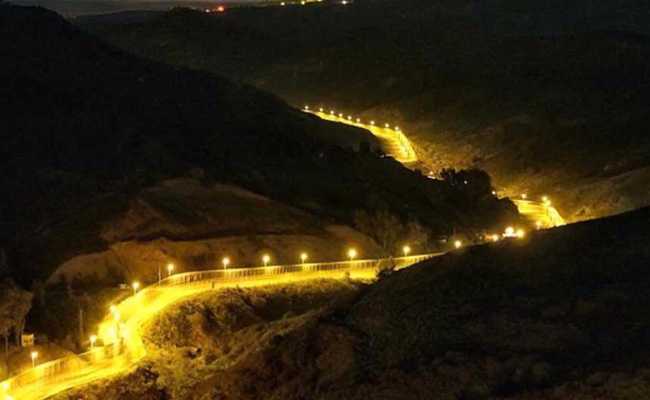 The image was taken in 2006 by Spanish photographer Javier Moyano, reported altnews.in.

Goyal’s colleagues in the home ministry, too, embarrassed the Narendra Modi government earlier this week when a photo captioned in its yearly report as “floodlighting along the border” turned out to be from the Spain-Morocco border. The ministry was quick to order an internal investigation after AltNews.in pointed out the gaffe.

The report has been out in the public domain for almost three months now, reported the Times of India. 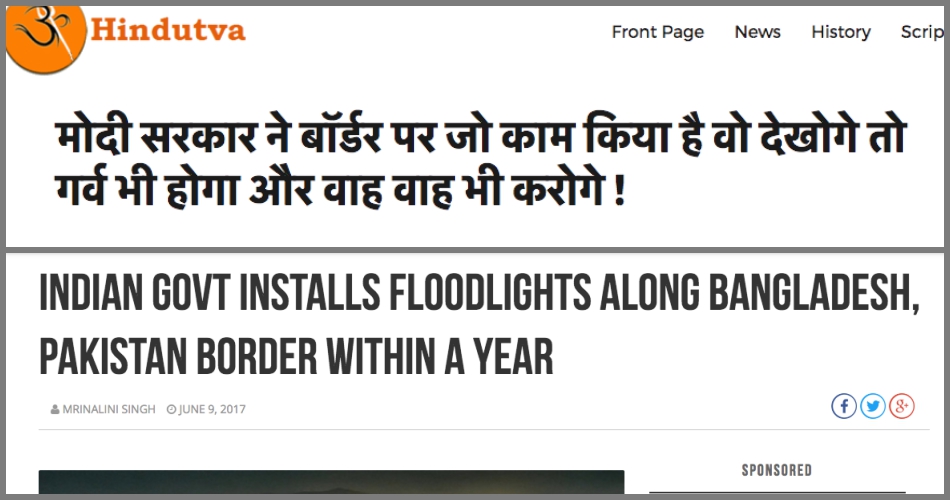 The image, which was taken in 2006 by Spanish photographer Javier Moyano, was also used by pro-Hindutva websites Hindutva.info and TheFearlessIndia.in to boast about the Modi government’s accomplishments.

Sadly, this isn’t the first time the Modi government has been mocked for using ‘altered’ images. In 2015, the Press Information Bureau tweeted a photoshopped image of Modi visiting flood-hit areas of Chennai. 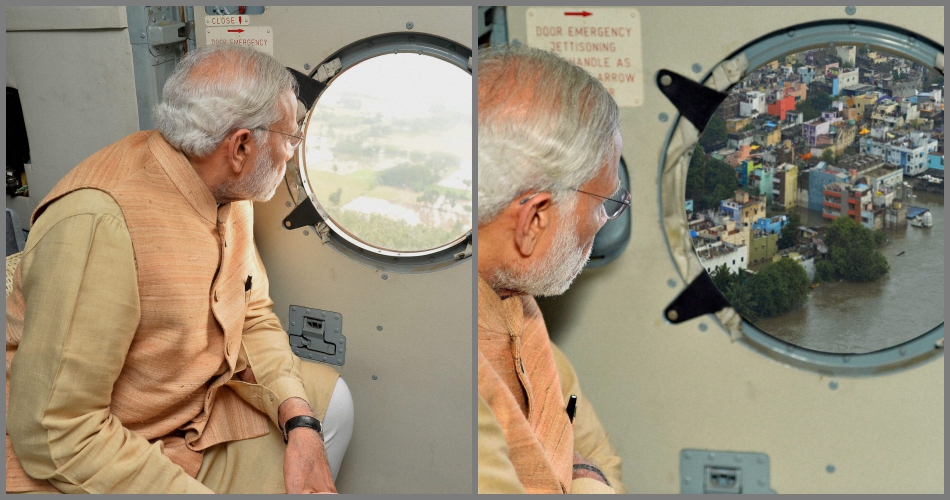 From time to time politicians like Babul Supriyo, Meenakshi Lekhi, Nirmala Sitharaman and Sambit Patra have also fallen for fake news shared by their own propaganda machinery. 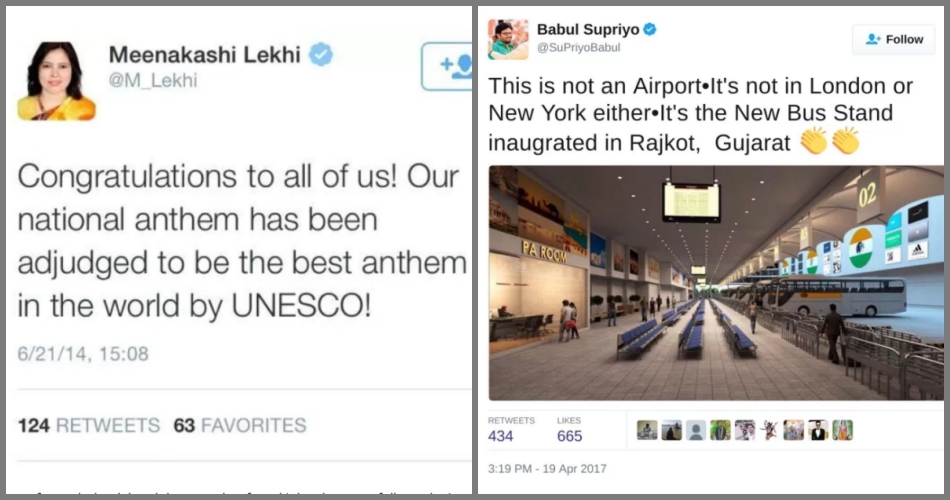 But the problem is that fake/altered images aren’t only being used for chest-thumping by the government, many individuals are using photographs out of context to incite violence too.

An old photo of Colonel D.K. Rai, who passed away in March 2017, being attacked by the police is being used by the right wing propaganda machinery claiming that West Bengal chief minister Mamata Banerjee is lathicharging the soldiers who had fought the Indo-China war in 1962.

According to AltNews.in, this image was also shared by Major Gaurav Arya, who is now associated with NDA politician Rajeev Chandrashekhar’s channel, and PostCard.News, a pro-Hindutva website infamous for publishing fake news. 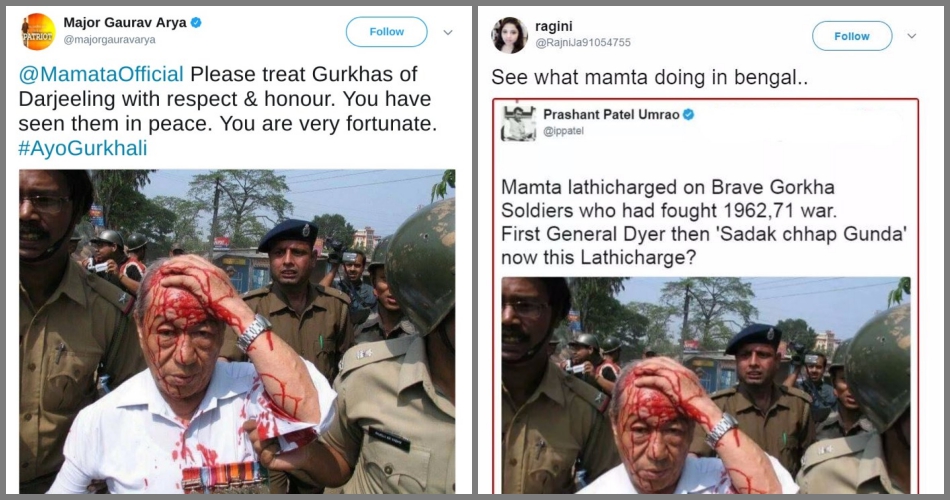 The same photo was also widely circulated during the 2016 One Rank One Pension (OROP) protest by ex-servicemen in Jantar Mantar, reported The Quint.

For those in the propaganda warfare business, WhatsApp has emerged as the preferred weapon. It is free and easy to download. All you need is a smartphone. Unlike other social media platforms, WhatsApp users aren’t even required to register or ‘log in’ and its end-to-end encryption makes it impossible to track what flows through it. It’s biggest asset for the rumour-monger is that once the fake news is seeded, it becomes virtually impossible to trace the point of origin.

In April 2017, hatemongers used the messaging app to pass off a video shot in Bangladesh as anti-Hindu violence in Bihar in an attempt to instigate hatred and violence against Muslims in India. 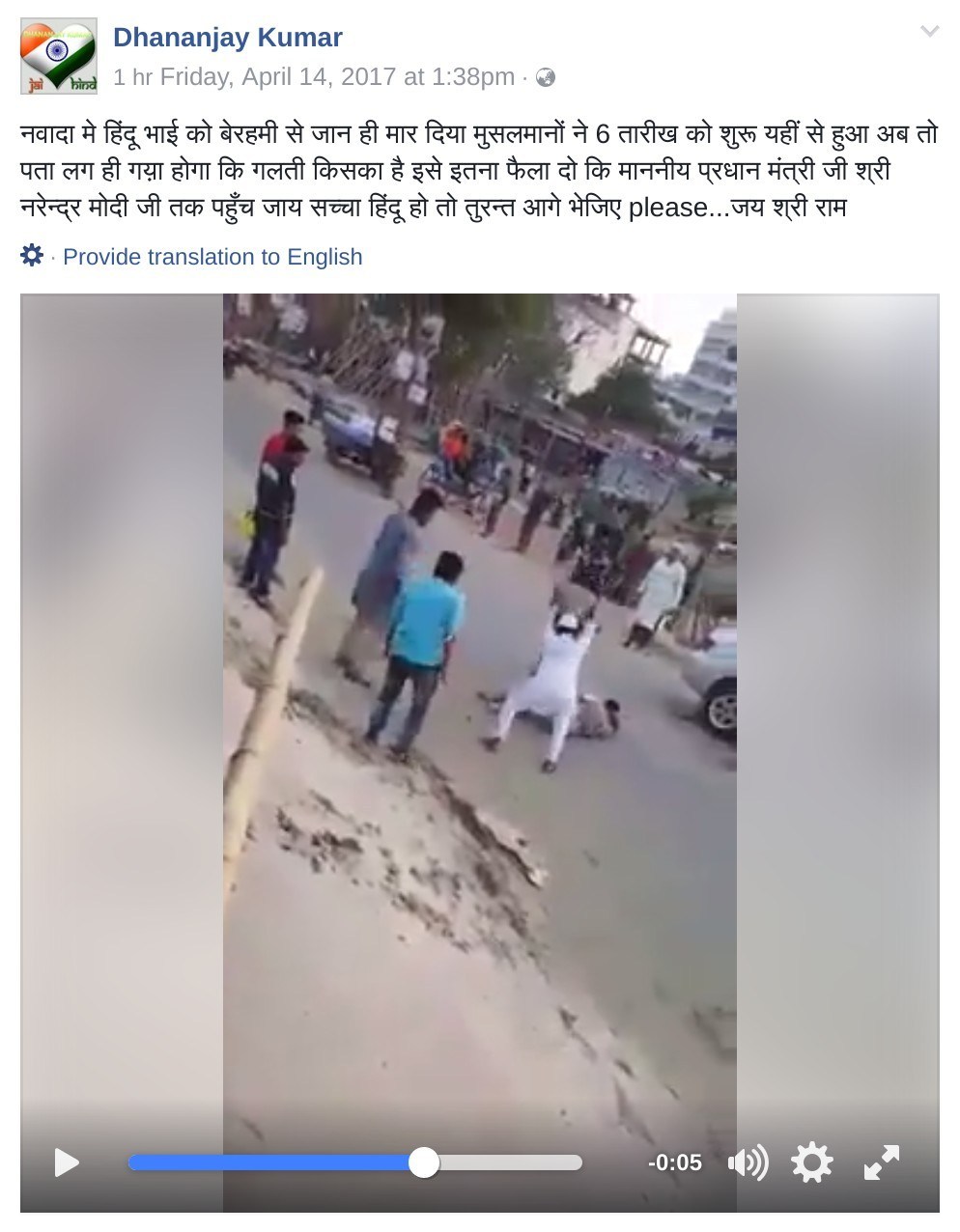 The gruesome video, which is actually from Bangladesh, went viral on Facebook too, where it was shared as an example of Muslim violence on Hindus in India. Yet another example of the propaganda machinery in play to misinform people, create a feeling of insecurity amongst Hindus, and lay the ground for greater communal polarisation and even violence.

In May 2017, Kerala BJP leader K. Surendran faced flak for sharing a fake photo to unflamw sentiments after a calf was killed by youth Congress leaders. The post with an image showing a row of slaughtered cows lying on a street was shared by thousands on Facebook. Not only was the photo  old and fake in the Kerala context, it was from Bangladesh. 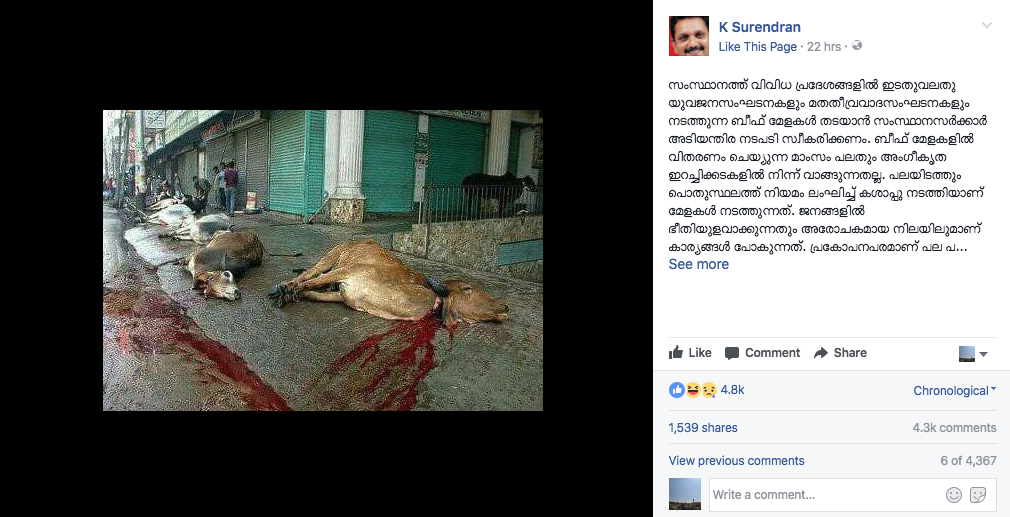 The Wire traced the photo and found that it is one that has been used widely and for a long time. While the origin of the photo could not be located, a simple Google search for the image showed that the earliest date that the photo was used is December 5, 2011, by an obscure Hindutva website called forumforhinduawakening.org. There is no attribution for the photo. 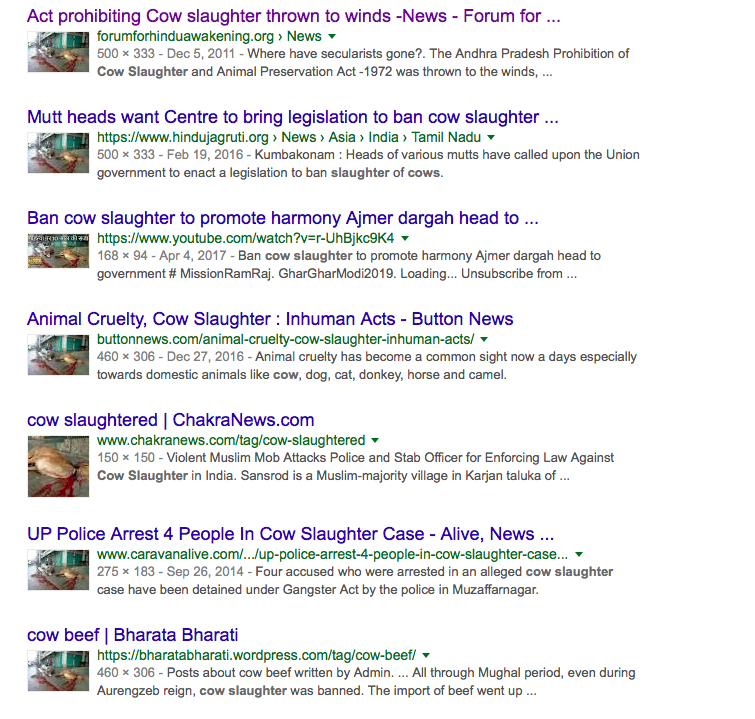 The photo has been used frequently after that, with widespread use throughout 2012-2017. On the unending list, many of the articles that use the photo are anti-cow slaughter rants, carried by Hindutva-oriented websites like chakranews, Hindu Jagruti Samiti, dailyvedas and so on. Bharata Bharati used it in August 2016 in an anti-cow slaughter article while indiatimes, a portal run by the Times of India group, used it in an article dating back to July 2015 titled ‘The Condition of Hindus in Pakistan’. The list goes on and on. Interestingly, none of these websites ever attributes the photo source.

Despite being victim to many similar hoaxes, Indian stakeholders continue to stay silent during the debate on how to deal with fake news. Probably because many of them are thriving on it.

For more on fake news …