Even During Press Council's Probe Trip to Kashmir, Intimidation of Journalists Continued

Detention, questioning and harassment continues to be the norm for journalists in the Valley, as the space for critical reporting shrinks. 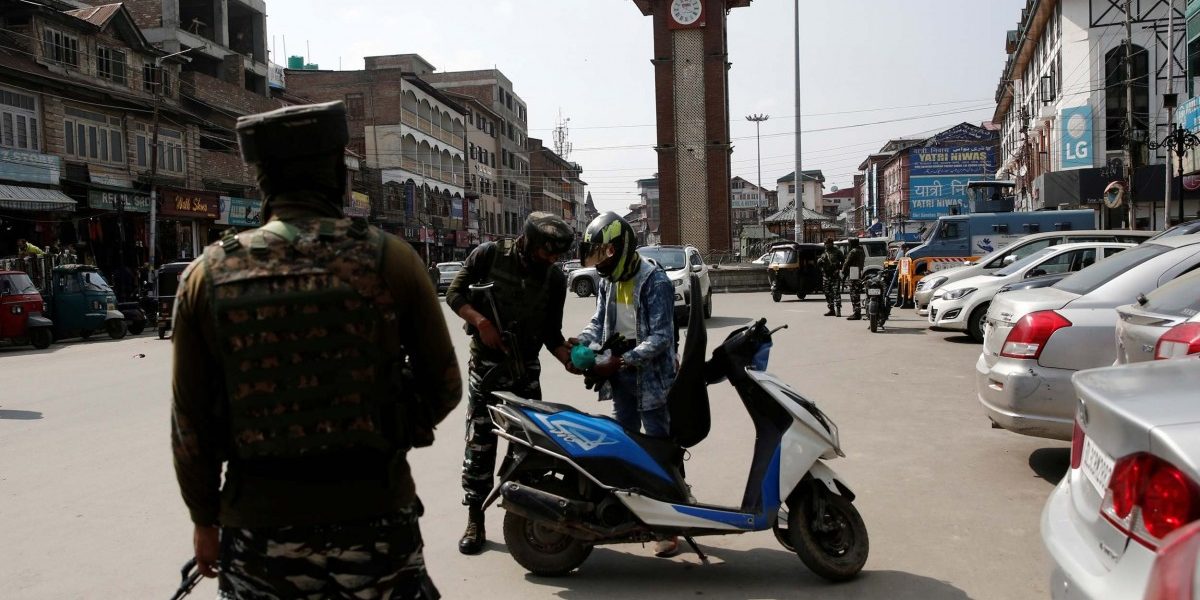 CRPF jawans check the bags of a scooterist as part of security checking in Srinagar, October 12, 2021. Photo: Reuters/Danish Ismail

Srinagar: A day before the Press Council of India’s appointed probe committee was going to meet journalists in Kashmir, Mukhtar Zahoor, a stringer with the BBC, was summoned from his home and forced to spend a night in a Srinagar police station.

When the police summoned Zahoor at midnight, they said they had to ask him a few things. Instead, he was kept in custody for the night. “I couldn’t sleep at all; I was kept thinking about what I may have done wrong,” he told The Wire.

Zahoor said that in the morning he was let go after his questioning was complete. Most questions, he told The Wire, were about his whereabouts on September 1 – the night Hurriyat Conference leader Syed Ali Shah Geelani passed away. “They asked me about the places I visited that day. They checked my phone and also questioned me about my contacts and content I had on my phone,” he said.

Another freelance journalist, Sajad Gul, alleged that his house was also raided by the authorities on October 13, the day the PCI team was meeting journalists in the Valley. Gul recently did a story in which a family from north Kashmir alleged that their son was killed in a fake encounter in Bandipora.

“My brother called me in a panic. He told me to come home as soon as possible but I was in a class and several km away from home,” he said. Gul is currently enrolled in a masters programme in journalism.

When he went to the Hajin police station, he continued, a police officer took his phone from him and deleted his tweets. Among them was one that he had posted a few days earlier in which he had said the police were threatening him.

The Wire spoke to to the SSP Bandipora, Mohammad Zahid, who said these allegations are baseless. “This isn’t true. His house wasn’t raided,” he said. Zahid said that Gul’s tweets on the police were “baseless” and claimed that the reporter had himself deleted those tweets.

The PCI recently said that it has constituted a three-member fact-finding committee to look into the allegations of intimidation and harassment of journalists in Jammu and Kashmir. This reaction came after former chief minister of J&K Mehbooba Mufti wrote a letter to the PCI and Editors Guild of India, raising the issue of intimidation and “systematic” harassment against Kashmiri journalists.

The PCI team met with journalists in the circuit house – a government guest house in Srinagar – on October 13.

Sources privy to the meeting told The Wire that people named in the guest list included those who in the past had identified themselves as government employees. “One of the individuals among them was listed as a ‘columnist’,” a source said. The Wire also found out that others named in the list were editors of little-known websites who in the past have either subscribed to or propagated the government’s views on and actions against journalists in Kashmir.

Right now, most independent journalists who work on ground are alleging harassment. A few freelance journalists working outside Srinagar, who spoke to The Wire anonymously, also said that these days they fear raids from authorities and so are choosing to stay outside their own homes.

Two journalists from south Kashmir’s Anantnag district were arrested last week: Salman Shah (30), an editor at the online weekly Kashmir First, and Suhail Dar (21), is a freelance journalist. Both have been booked under Sections 107 and 151 of the Code of Criminal Procedure. Under 107, a person can be kept in preventive custody on an executive magistrate’s order to prevent ‘breach of peace’. Section 151 deals with commission of cognisable offences, stating that “a police officer knowing of a design to commit any cognisable offence may arrest, without orders from a Magistrate and without a warrant, the person so designing, if it appears to such officer that the commission of the offence cannot be otherwise prevented”.

“We have no idea why he has been summoned. He was told to report to the police station, and police have not told us until yet what his crime was,” said Dar’s relative. He had come to court to pay Dar’s bail, but got to know that the police have asked the executive magistrate for seven days’ remand.

“Dar is the only one who looks after his ailing parents. They are not able to come to court,” he said, wishing to remain anonymous.

Salman’s brother Imran Shah said that Salman was summoned seven days before by the police, from his home.
“Police said that they have to question him and he will be released after that,” he said.

Habil Iqbal, a lawyer from south Kashmir, told The Wire that there has to be some material with the police on the basis of which they can book a person under these sections. “These are a less stringent version of the Public Safety Act (PSA). Invoking these sections arbitrarily is violative of Article 19 and 21 of the constitution of India,” Iqbal said.

The Wire reached out to the police in Anantnag for a comment, but didn’t receive a response. The story will be updated once a response is received.

The Committee to Protect Journalists on Friday demanded the immediate release of Shah and Dar. The US-based non-governmental organisation also urged the administration of Jammu and Kashmir to stop questioning journalists and asked the authorities to instead allow the media to operate freely.

The Wire asked journalists in the Valley about their experiences with and expectations from the PCI team, but no one wanted to speak on the record. A journalist working with a national portal said on condition of anonymity that the PCI had earlier justified the communication lockdown in Jammu and Kashmir, which led to the complete breakdown in dissemination of information and was a violation of the freedom of press and speech. “Therefore, the current exercise of the PCI can be a redeemable effort for the body to stand for the rights of journalists and support Kashmir’s independent media landscape.”

He, however, added, “At the same time, given the way other accountability institutions have functioned in the context of Kashmir, Kashmiri journalists aren’t very enthusiastic about PCI’s final report.”