Editorial: The Modi Government’s Escalating Offensive Against Freedom of the Press

India's democracy is dying in bright daylight because the media is under siege. 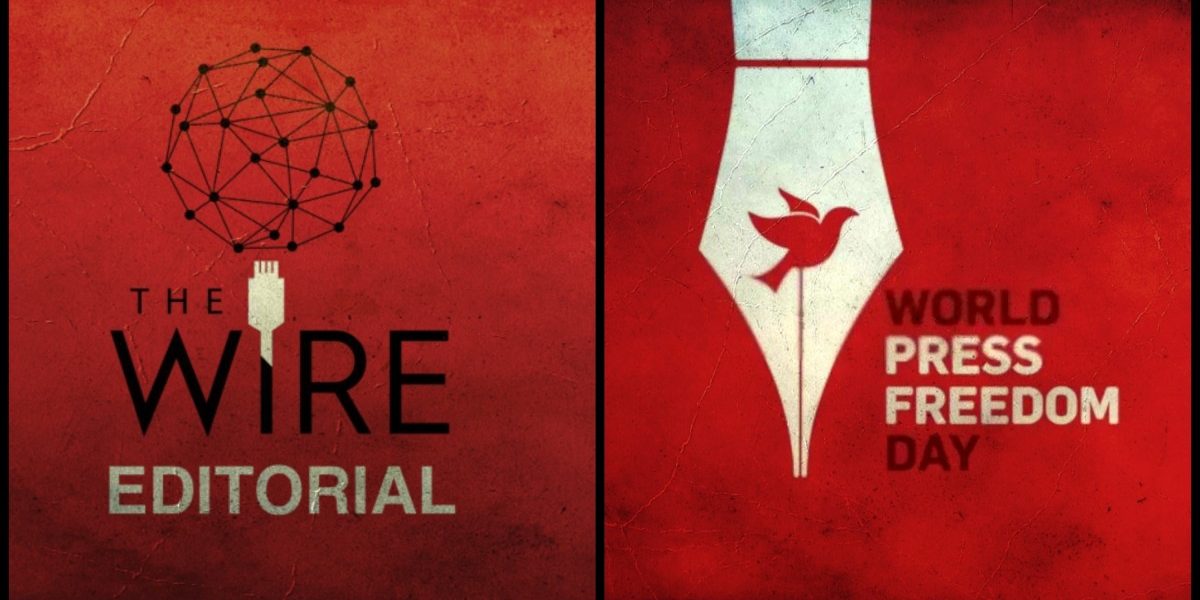 Today is World Press Freedom Day but in India, May 3, 2022 marks the 575th day of Siddique Kappan’s incarceration in Uttar Pradesh for a story he never even got to write on the gang rape and murder of a Dalit woman in Hathras. Today is also the third month of Kashmirwalla editor Fahad Shah’s imprisonment in Srinagar and the fourth month of freelance reporter Sajad Gul’s jailing by the Jammu and Kashmir authorities.

Kappan and Shah have been charged under the Unlawful Activities (Prevention) Act – the draconian ‘anti-terrorism’ law. While Kappan has not managed to secure bail even a year and a half after his arrest, Shah was promptly arrested under a second ‘offence’ hours after he made bail. To ensure he remains in jail, the J&K government – which answers to Union home minister Amit Shah – has now held him under the Public Safety Act (PSA), a preventive detention law under which a ‘detained’ person can be kept behind bars for as long as a year without charge or trial. This is also the route the police have used to hold Sajad Gul – a telltale sign that the actual case against him will not withstand judicial scrutiny. The PSA allows for revolving door detentions: as soon the year ends, the Act can be slapped on the person again.

It is important to remember Kappan, Gul and Shah because they are the most visible symbols of the government’s full-spectrum assault on press freedom in India today. As recently as five years ago, the biggest occupational hazard the media had to contend with was the misuse of defamation as a means of harassment and intimidation. Today, however, the range of threats is far more deadly.

Under the Modi government, the ongoing assault on media freedom takes multiple forms:

Then there are the lesser sins, such as the lack of transparency and accountability in government communication, from the prime minister down. Narendra Modi steadfastly refuses to hold a press conference in India and refuses to allow questions when his hosts abroad convene such events. Right to Information queries are stonewalled or turned down on the flimsiest of pretexts.

Eight men, including a journalist, were allegedly forced to strip in a police station in Madhya Pradesh’s Sidhi district in April 2022. Photo: Twitter/@gwaliorimpact.

The government’s war on journalists relies on two force multipliers: the willingness of a section of big media to not just toe the official line but actually applaud its actions, and the unwillingness of the courts to swiftly and decisively uphold the constitutional guarantee of freedom of the press.

Also Read: An SOS for India’s Democracy and Media

Though there are welcome exceptions, lower courts frequently go along with the abuse of executive power, leaving it to the higher judiciary to provide a remedy. Regrettably, the response of the high courts and even the Supreme Court to attacks on press freedom have not been uniform. There have been some landmark orders – the apex court’s rejection of the government’s ‘national security’ alibi in the Pegasus case is one example, as is the Bombay, Madras and Kerala high courts’ decision to stay the most objectionable sections of the IT Rules – but cases pertaining to the freedom of journalists to do their job without the threat of imprisonment hanging over them have not been handled with the firmness and urgency they require.

In a recent interview, the minister of state for information technology has spoken of the government’s plans to amend the Information Technology Act, 2000 so as to introduce restrictions to free speech and freedom of the press that go “beyond 19(2)”, i.e. restrictions more sweeping than what the constitution allows the government to impose via statute.

Indira Gandhi’s national emergency – which lasted 21 months – saw censorship, the abolition of the Press Council of India and the arrest of journalists. Narendra Modi has criminalised journalism on a scale not seen since 1977, rendered the (now largely toothless) Press Council irrelevant using administrative means and revived the spirit of the obnoxious ‘Prevention of Publication of Objectionable Matter Act, 1976’ via the promulgation of the IT Rules, 2021, through which the government has arrogated the right to delete digital news content that it considers objectionable.

Modi’s undeclared emergency is already in its eighth year and is showing every sign of  escalating its offensive against the democratic rights and civil liberties of the people. The time for mincing words has long passed: India’s democracy is dying in bright daylight. And yet, this death is not inevitable. The press is under siege but must find ways to stand its ground, chronicle what is unfolding and raise its voice in solidarity with every journalist and media house in the firing line.

Note (November 4, 2022): This article was edited to remove a reference to Tek Fog. The Wire’s Tek Fog stories have been removed from public view pending the outcome of an internal review.