Thanks to TV news channels, Rhea Chakraborty stands a condemned woman, with all manner of accusations hurled at her without a shred of evidence. 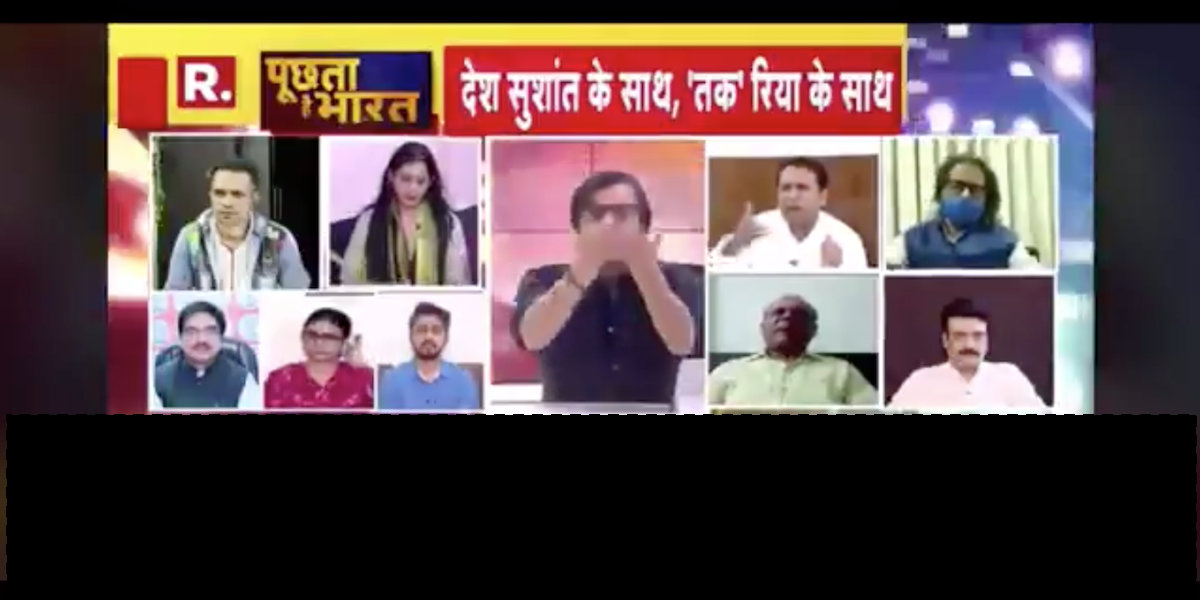 Till very recently, Rhea Chakraborty was not a name familiar to the general public. Though she had made her television debut over a decade ago, her film portfolio is somewhat slim. Today, however, ‘Rhea’ is the only news India’s big media houses want to talk about. Not COVID,-19 which is killing a thousand Indians a day, not the unresolved standoff with China, not the horrendous state of the economy, not even the plight of lakhs of students who are being forced to take their engineering and medical entrance exams in the midst of the pandemic.

In TV’s rush to drown viewers in diversionary noise, Chakraborty stands a condemned woman, with all manner of accusations hurled at her – a manipulating girlfriend who stole money from her partner Sushant Singh Rajput, was on drugs and perhaps abetted or at least conspired to have him killed.

All of these wild charges are based on a deadly cocktail of innuendo, constant vilification on social media and unending sensational coverage of what was initially thought to be a simple case of death by suicide. Official agencies such as the Central Bureau of Investigation and the Enforcement Directorate have interrogated Chakraborty for hours. On nightly television news – whose anchors serve as judge, jury and executioner in all matters – she has been vilified beyond all known limits of journalistic ethics, to say nothing of human decency.

Whatever dubious information this process has produced has been presented to the public as hard fact, without a shred of evidence. The Indian viewer is used to this level of media hysteria, of course, but if and when the history of media transgressions is written, #SSR will surely make it to the top three cases in recent times. Barring a handful of channels, no one has bothered to even hear Chakraborty out. In the interviews she has given, she has come across as a grounded individual who gave her point of view soberly and with conviction. The rest of the broadcast media has kept up the frenzied drum beats of a witch-hunt.

Conspiracy is too strong a word to use, but the coverage and its tone and pitch appear to be well-organised. The steady stream of half-baked ‘evidence’ flowing from the official investigation into those news channels which are leading the charge seems aimed at keeping a particular narrative going; the extent to which ignorant investigators and moronic media are working in tandem became clear when a text message from Rhea Chakraborty with the millennial phrase ‘Imma bounce’ (translation; ‘I’m leaving’) became a sensational news break on Times Now – a news channel owned by India’s biggest media house – about how the young woman was conspiring to bounce a cheque!

Irresponsible WhatsApp messages may be an inevitable part of modern life but media organisations have no excuse to behave like online trolls. We can laugh at certain TV channels and ridicule them but the fact is that their predatory and irresponsible journalism is ruining people’s lives. Chakraborty appears to have a steely will in presenting her side of the story, but she and her family cannot but be affected by this daily media lynching.

Inviting the government to lay down regulations to stop such coverage will be a cure worse than the disease, and there is no chance that self-regulation will work. The solution, however, lies in the hands of Indian viewers, who should use their remotes sensibly and stop watching these channels. This expression of disgust is the only thing that can make a difference.