Dileep Padgaonkar, Forever a 'Times Man', Long After The TOI Had Moved On 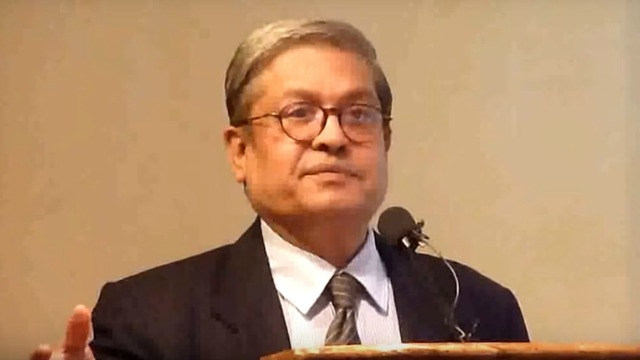 Dileep Padgaonkar, former Editor of the Times of India, passed away in Pune on Friday. Credit: Youtube

Dileep Padgaonkar may have once rated his job as editor of the Times of India as the second-most important one in the country after the prime minister but of all the storied names in Indian journalism, he was arguably the only one whose interests and inclinations transcended  the world of news and newspapers, politics and power.

Padgaonkar passed away on Friday after battling a series of sudden ailments. He was 72.

At a time when many of his contemporaries would have liked nothing better than to cultivate politicians, wangle a nomination to the Rajya Sabha and cling to the suffocating confines of Lutyens’ Delhi, Padgaonkar sought personal renewal in the company of artists and cineastes, scholars and writers. When he felt his innings in active journalism had ended, he cheerfully did the unthinkable – packing home and hearth and shifting from Delhi to distant Pune with his wife, Latika, an authority on world cinema and his conscience-keeper as well. It was there that he lived out his last years, looking after his aged parents and rekindling in the city of his youth the world of ideas and the culture of public engagement to which he was personally so attached.

Padgaonkar started writing for the Times of India as a graduate student from Paris in the late 1960s and instantly made his mark as a thoughtful commentator. His forte as a journalist was the interview, a form he mastered and used to great effect, introducing generations of Indian readers to ideas and personalities they were only remotely aware of.

As a journalist and editor, Padgaonkar, imbibed the best qualities of his forerunners and peers without being burdened by their angularities and prejudices. He shared Sham Lal’s passion for the world of letters and ideas and Girilal Jain’s keen eye for politics. He was an internationalist like Frank Moraes but also a statist in the tradition of B.G. Verghese – an editor who felt he had a better sense of what was in the national interest than the politicians and bureaucrats who made up the ‘establishment’. He had a sense of humour as wicked as that of Khushwant Singh and was a raconteur nonpareil. He was a connoisseur of Hindustani classical music and wrote knowledgeably about food. A man of great learning and culture, he was a Francophile and a Maharashtrian in equal measure. Anchored in many worlds, he was no rootless cosmopolitan. He could switch effortlessly between cultures and languages because he refused to limit his identity to a single dimension, but there was one area in which he allowed singularity to get the better of him ­– ­his unswerving and often irrational attachment to the Times of India.

“I had wanted to work for the Times of India ever since I was seven-years-old”, Padgaonkar once confessed to a mutual friend, Jyotirmaya Sharma. That childhood desire never left him. In a profession riddled with promiscuuty, he was perhaps the only heavy-hitter never to join another paper. When I pleaded that he write a piece for The Wire on Kashmir a few months ago, he said he couldn’t because he was committed to writing only for the TOI. (We journalists, of course, have our ways. He readily consented to an interview, which we ran).

Padgaonkar was the quintessential ‘Times man’ (to use the slightly clubby term he loved to invoke when there were no ‘non Times men’ around) – liberal, secular, fair-minded, at ease with Indian and world culture, Indian and world cuisine, statist but also skeptical of power – and remained one to his dying day, long after his object of veneration had transformed into something less desirable, and when the men and women now associated with the newspaper had nothing in common with his Weltanschauung.

He helmed the TOI during two crucial periods in the life of India – the rise of Hindu chauvinism from the late 1980s, and the arrival of the Bharatiya Janata Party as head of a governing coalition government at the centre. Under him,  the newspaper re-emerged as the moral compass of a country that was buffeted by the ill-winds of communal politics that would eventually lead to the demolition of the Babri Masjid in 1992 and worse.

Padgaonkar’s tenure during this period was the high-water mark for the Times of India’s intellectual leadership  of national discourse. This was also the time of market reforms, which Padgaonkar, as an economic liberal, backed. But the equation was not so simple. With new opportunities in front of them, The newspaper’s owners, and Samir Jain in particular, had other ideas about the kind of ‘product’ they wanted to sell in order to create a mass market for news. In the eyes of Samir, known in the company simply as ‘VC’ (for vice chairman), the editorial intellectualism of Padgaonkar, and his expansive, nuanced but rigorous approach to reporting were obstacles. Confident that he was sitting on the cusp of a readership revolution, VC decided the Times of India needed marketing and not ‘Times men’. A showdown followed and Padgaonkar eventually left to start another media venture – the moderately successful APCA, which published titles like Biblio and Himalayan Times. The Times of India itself continued to cruise along, maintaining, under Sanjaya Baru, the tradition of a lively editorial page that Padgaonkar had established. But gradually the marketing men and brand managers began to leave their impress on various parts of the newspaper. Circulation and revenue boomed, even as journalism at the group began a long and slow descent.

Padgaonkar was to return for a second innings in 1998 when H.K. Dua, whom the newspaper had hired as editor during the tenure of H.D. Deve Gowda and Inder K Gujral as prime minister, was unfairly (and as it turned out, improperly) terminated. Eager to restore normality, Samir Jain brought back the very man whom he had ousted a few years earlier, this time under the title ‘executive managing editor’. This was the Padgaonkar avatar that I got to see and work with, first as an assistant editor on the editorial page and then as deputy chief of bureau – a move to the reporting side that he encouraged me to make. The culture and wit and passion were exactly as I had heard but it was clear that the times (and the Times) had changed even if he hadn’t.

As the owners and management made greater inroads even on day-to-day matters, it was evident that Padgaonkar no longer had the authority he had enjoyed as editor in his first innings. Samir Jain loved the lustre Padgaonkar brought to the Times as far as the outside world was concerned; within, he found dozens of ways of circumscribing his editorial authority. Padgaonkar’s way of coping with this unpleasant reality was to ring fence as much of the newspaper as he could by deploying charm and humour – and the occasional compromise. It was a losing battle, of course, in the long run, though ‘Paddy’ won the odd skirmish here and there. From the outside, it is easy to dismiss the path he chose in returning to a newspaper whose owners had already set sail into troubled waters. From the inside, however, one can say that because of his presence, there were stories done and pieces written and jobs saved that might not otherwise have been. The Times of India’s coverage of the 2002 Gujarat killings demonstrated the newspaper still had the capacity to do great journalism despite enormous pressure from the then Vajpayee government. That it did so was thanks to Padgaonkar (who by then was running only the Sunday TOI but was still an influential voice with the paper’s ‘shareholders’) and, of course, Shekhar Bhatia who was the newspaper’s executive editor at the time and held firm on the importance of reporting the truth, however unpalatable it might have been to the government of the day. Padgaonkar was also part of the Editors Guild fact-finding team that looked at the role of the Gujarati media in the violence. The report, which he co-authored, remains the sole surviving source for Narendra Modi’s controversial ‘action-reaction’ quote about the killings of Muslims in his state.

No account of Padgaonkar’s lifelong attachment to the Times of India would be complete without an analysis of the complex relationship he enjoyed with Samir Jain, one that I am not competent to conduct. Jain was clear that he could never fully entrust the TOI in Padgaonkar’s hands because his view of what a good newspaper should be was out of sync with the company’s thinking. But he had a constant desire to bounce ideas off him and engage in lengthy discussions on ‘spiritual’ matters. There was of course nothing remotely ‘spiritual’ about Paddy and I don’t know if the VC ever realised this. At some stage, when I found myself being summoned for such sessions and receiving notes from the VC with cryptic observations about my work or tasks I was supposed to be doing, Paddy provided me with the perfect coping strategy. He presented me with a copy of Bhaktivedanta Prabhupada’s Bhagvad Gita As It Is and said, ‘Close your eyes, open the book, and point your finger at any line on any page. Take the English translation of that verse and type it up in a note.’ I was skeptical so we did a trial run. I had just received an unfathomable note from Samir Jain on the role of language, the kind to which there is no right answer. The reply we made up looked something like this:

Apropos your note, this is what Arjuna says:

Out of many thousands among men, one may endeavour for perfection, and of those who have achieved perfection, hardly one knows Me in truth.

In my remaining years at the Times of India, Padgaonkar’s magic formula never failed me.

There was one final act of public service that fell on his shoulders – when he was tasked in 2010 with heading a group of interlocutors appointed by the Manmohan Singh government to look into the grievances of the people of Jammu and Kashmir and make recommendations for their resolution. The report may not have been as bold as some analysts might have wanted but its recommendations were just, humane and above all, politically feasible. That the government chose to ignore the report is a different matter.

In the last months of his life, the situation in Kashmir remained a matter of deep concern for Padgaonkar. The columns he wrote for the Times of India reflected his anguish at the increasingly intolerant political culture that the Modi government has spawned.  I last met Padgaonkar and his wife Latika for lunch at his apartment in Pune in August. He was particularly upset with the gladiatorial nature of television news. I should have asked him what he thought of ‘Times men’ making way for ‘Times Now men’. But that would have been like rubbing salt in an open wound.

Dileep Padgaonkar, former editor of the Times of India, public intellectual and author, died in Pune on November 25, 2016 at the age of 72. He is survived by his wife Latika and two sons.