Fact Check: Shooter Photographed During Jaffrabad Violence Was Not Part of Pro-CAA Group

Furthermore, the claim that the protesters were carrying saffron flags was found to be untrue. 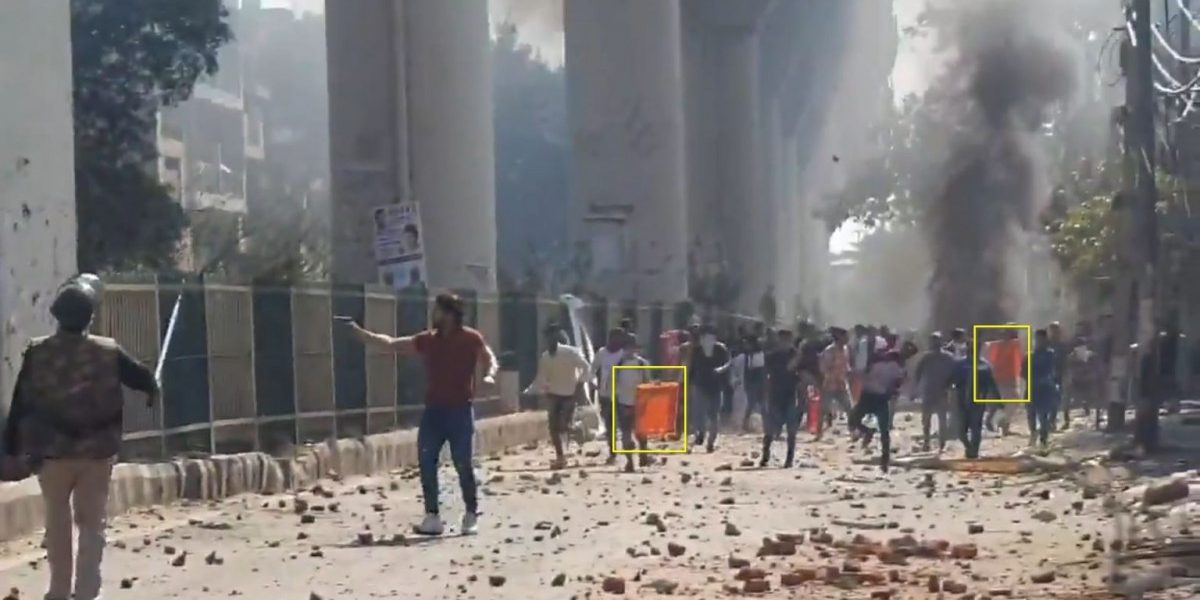 For the second consecutive day, clashes broke out between groups opposing the Citizenship Amendment Act (CAA) and those in support of the law. A video of a protester in northeast Delhi’s Jaffrabad rapidly moving towards a Delhi police personnel with a gun in his hands, subsequently shooting multiple rounds has gone viral on social media. In the video, the man can be seen pointing the gun in the direction of a mob on the other side of the road and later towards the lone police personnel. The shooter had reportedly fired around eight rounds. Saurabh Trivedi, senior reporter with The Hindu, posted a video of the incident and stated that an anti-CAA protester opened fire in Jaffrabad.

An anti-CAA protester open fire in #Jaffarabad area. He pointed pistol at policeman but the cop stood firm. He fired around eight rounds. @DelhiPolice pic.twitter.com/0EOgkC6D40

Allegations against BJP and RSS

Soon after the incident, Aam Aadmi Party (AAP) MLA Amanatullah Khan tweeted grainy images of the incident and suggested that the shooter is associated with the Bharatiya Janata Party (BJP). He said, “The shooter will definitely have an association with Kapil Mishra and BJP. And that is the reason, he is firing at the Delhi police. The police are giving protection to the rioters (translated)”. The tweet has amassed over 1,000 retweets so far. 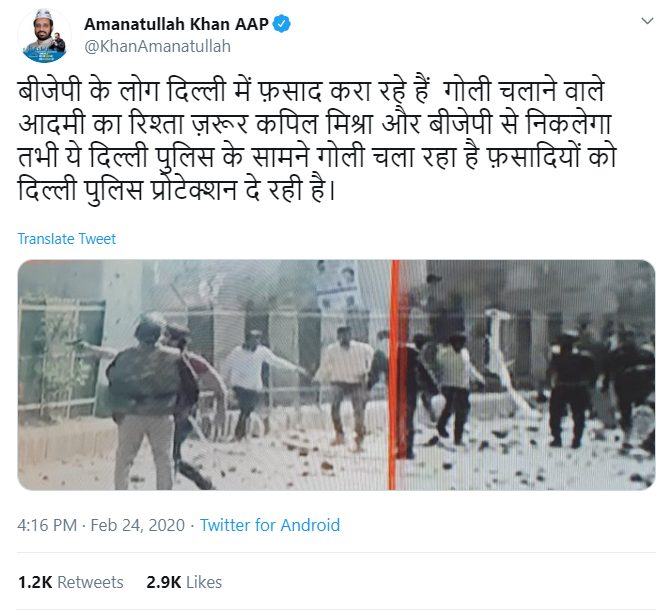 Writer-activist Hansraj Meena posted an aerial video of the same incident and said, “Watch the manner in which BJP and RSS terrorist is openly raining bullets at the police at anti-CAA protesters.” He later took down the tweet. 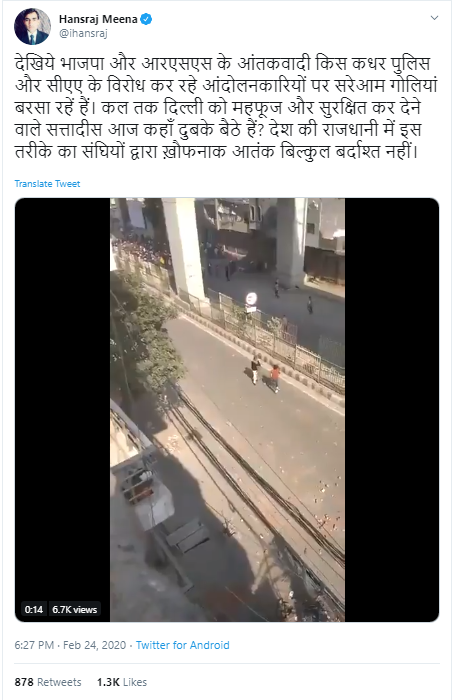 The official handle of Shaheen Bagh tweeted the video shared by Trivedi and asserted that the shooter was a “pro-CAA goon”. This was asserted on the basis of ‘saffron flags’ seen in the background, claimed the handle. 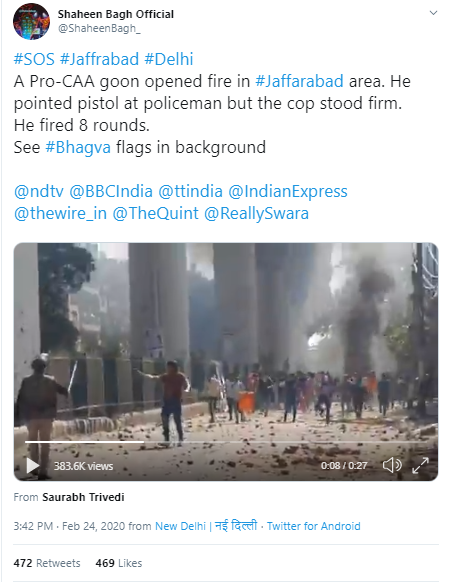 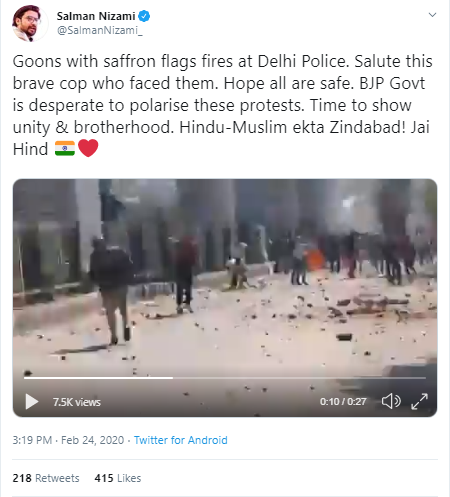 Alt News contacted Saurabh Trivedi who shot the video now viral on social media. Trivedi provided us with a higher resolution video of the incident. In the course of this article, we will fact-check two claims:

1. The mob was holding saffron flags.
2. The shooter was part of a pro-CAA mob.

We analysed the videos and found that the protesters were carrying plastic crates, not saffron flags. One can clearly spot the rectangular plastic crates in a screenshot taken from the high-resolution video. 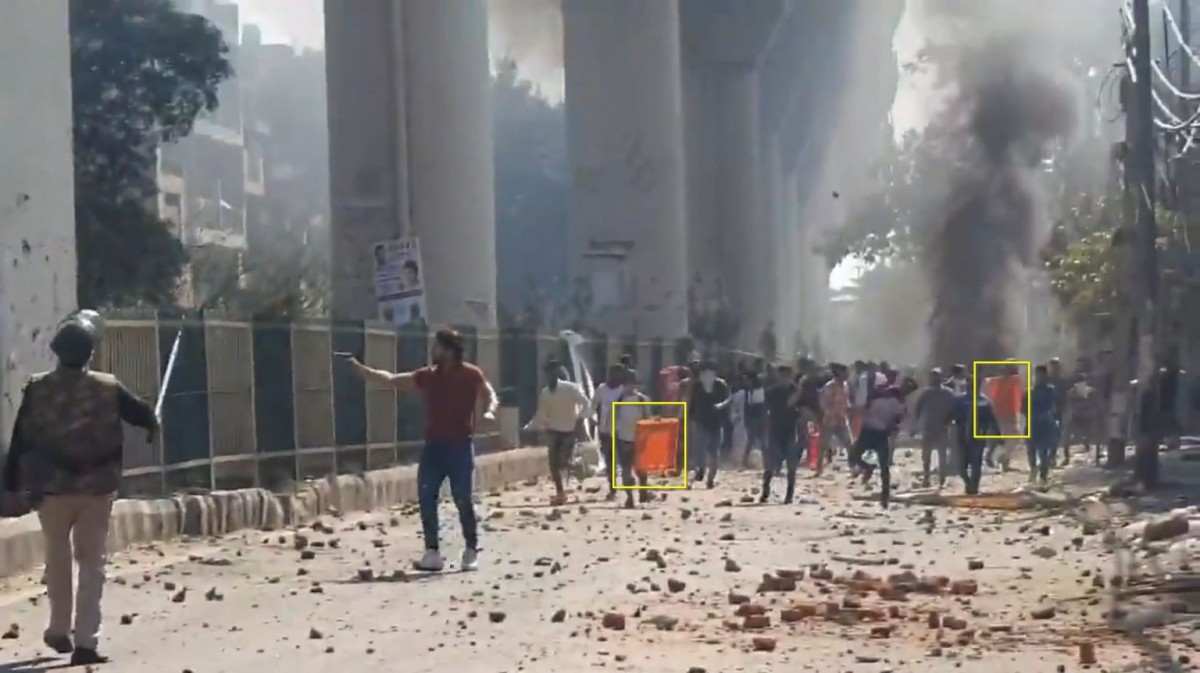 In several other frames, these crates can be spotted. 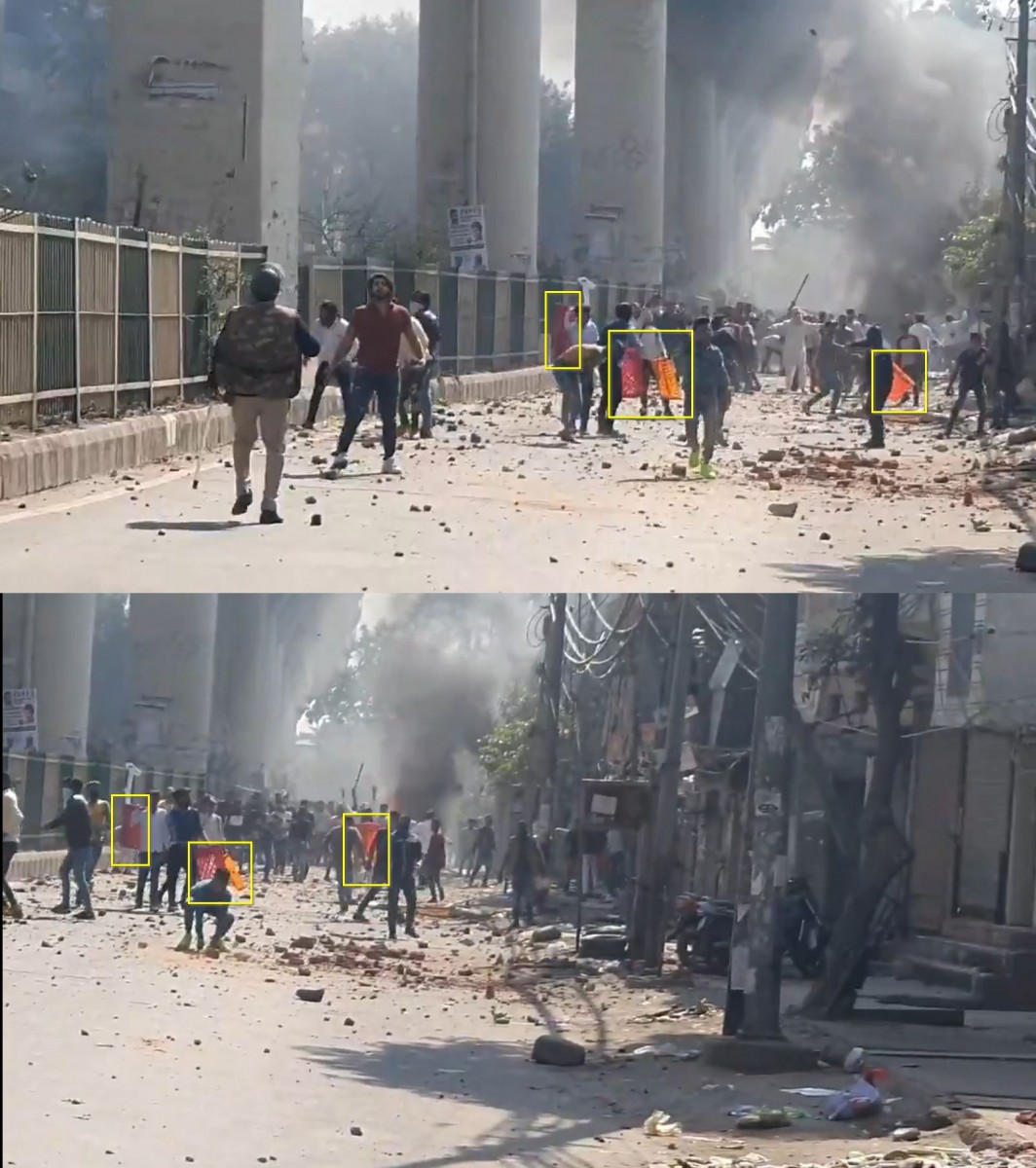 In conversation with Alt News, Trivedi explained, “These are plastic crates which were being used by the protesters as a shield.”

Identifying the mob – pro-CAA or anti-CAA?

Multiple individuals on social media claimed that the shooter was part of a pro-CAA mob. Alt News spoke with reporters who were on the ground to verify if this were true.

Trivedi told Alt News, “This man came from the anti-CAA protesters’ side. He shot several rounds, almost eight rounds aimed towards pro-CAA protesters, and in between a single policeman was standing. He aimed the pistol at him and said, ‘run or else I’ll shoot you (bhag jao varna maar dunga)’. But the policeman stood firm, and after that, the man turned back. The policeman retreated and asked other policemen to come with him, and apprehend the shooter.”

When questioned as to how he identified the man as an anti-CAA protester, Trivedi said, “The man came from the side where anti-CAA protesters had blocked the road just outside Jaffrabad Metro station. This man came out from the mob of that side. I was on the other side with the police near the temple where pro-CAA protesters were raising slogans like ‘Jai Shri Ram’. Both the sides were pelting stones at each other.”

Iyer was video-graphing the mob while walking from Jaffrabad towards Maujpur during the violent clash. Speaking to Alt News, she identified the mob in her images and videos as anti-CAA protesters. In a video posted by Iyer, one can spot multiple individuals wearing skull caps.

From ground zero walking right towards the epicentre of violence between Jaffrabad/Maujpur area of north-east Delhi.

To establish Iyer’s location and verify that the mob pictured by Trivedi and Iyer are the same, we compared a photograph clicked by Iyer with a PTI photo of the same incident. One can spot a policeman dressed in a yellow t-shirt donning a helmet in the images compared below. The cop is facing the anti-CAA protesters. The shooter (highlighted in green) is also visible in the picture.

While Alt News cannot independently verify, the shooter has been identified as Shahrukh by a few media organisations.

Delhi Police: The man in a red t-shirt who opened fire at police during violence in North East #Delhi today has been identified as Shahrukh. pic.twitter.com/xeoI7KpBPh

In conclusion, Alt News found that the shooter emerged from the side of the anti-CAA protesters. Moreover, the claim that people were carrying saffron flags was found to be untrue.