Number of Jailed Journalists at New Global Record, Seven Behind Bars in India

Six out of the seven jailed journalists are being investigated under or charged under the anti-terrorism law Unlawful Activities Prevention Act. 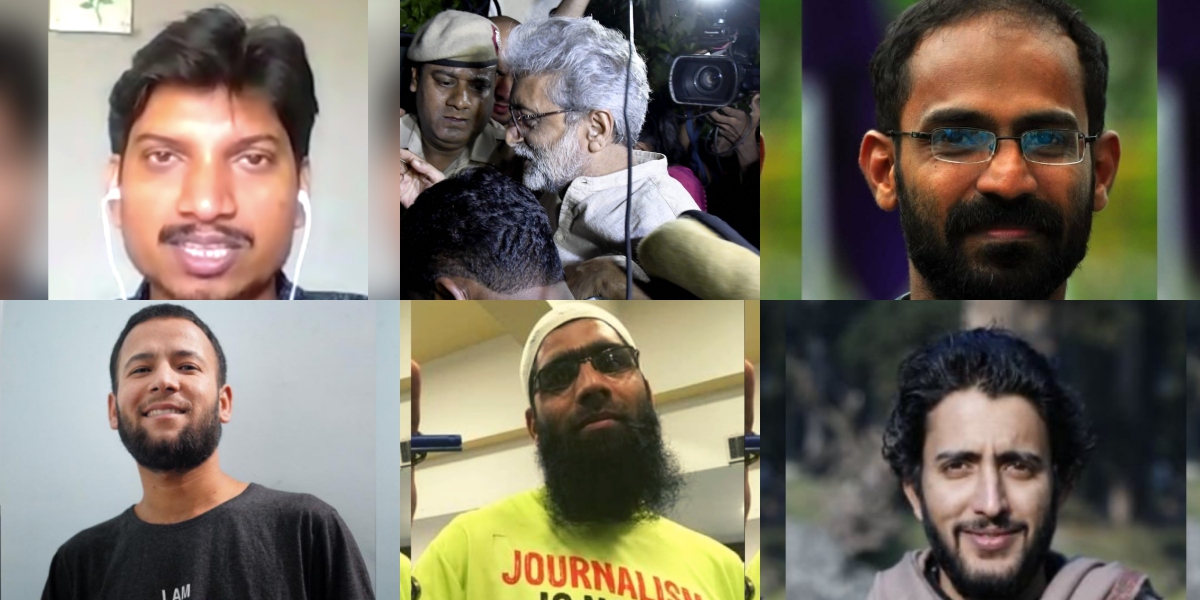 New Delhi: The number of journalists across the world who have been put behind bars for practising their profession has reached a record high this year, said the Committee to Protect Journalists (CPJ), adding that seven Indian reporters remain behind bars – a record high for the country.

CPJ said that 363 reporters – as of December 1, 2022 – are currently deprived of their freedom. The figure is a new global high which overtakes last year’s record by 20%, CPJ said, adding that it marks another “grim milestone in a deteriorating media landscape”.

The nonprofit body, which defends the right of journalists to report the news safely and without fear of reprisal, released its annual prison census on Wednesday.

According to the census, this year’s top five jailers of journalists are Iran, China, Myanmar, Turkey and Belarus. CPJ said that a “key driver” behind authoritarian governments’ increasingly oppressive efforts to stifle the media is trying to “keep the lid on broiling discontent” amid the twin crises of the COVID-19  pandemic and the Russian invasion of Ukraine.

What does the census about India?

CPJ said that India continues to draw criticism over its treatment of the media, in particular for the use of the preventive detention law, the Jammu and Kashmir Public Safety Act (PSA). This law has been used to keep Kashmiri journalists Aasif Sultan, Fahad Shah and Sajad Gul behind bars “after they were granted court-ordered bail in separate cases”, the organisation said.

Six out of the seven jailed journalists are being investigated under or charged under the anti-terrorism law Unlawful Activities Prevention Act (UAPA), it noted. Of these seven journalists, three have been in jail for more than a year.

Aasif Sultan, a reporter for the Kashmir Narrator in Jammu and Kashmir, has been behind bars since August 27, 2018 (4 years 3 months). He was initially arrested in a UAPA case but was rearrested under the PSA in April this year after he got bail in the case.

Siddique Kappan, a Malayalam freelance journalist, was arrested by the Uttar Pradesh on October 5, 2020 and has been behind bars for 2 years and 2 months. While the Supreme Court granted him bail in the alleged larger conspiracy case related to protests against the Hathras rape, he remains in jail due to a money laundering case.

Gautam Navlakha, a freelance journalist and activist, was arrested by the Pune Police in April 14, 2020 in the Elgar Parishad case. He spent more than 30 months in jail before he was put under house arrest by the Supreme Court.

Manan Dar, another freelance journalist, was arrested in Jammu and Kashmir on October 10, 2021. Accused of involvement in a “militant conspiracy” case, Dar has spent 1 year and 2 months in jail.

Sajad Gul of the Kashmir Walla has been in jail since January this year. He was first arrested for tweeting a video of a protest. After he got bail in the case, he was detained under the PSA.

Fahad Shah, also of the Kashmir Walla, was arrested in February this year after the Army accused him of spreading “fake news” regarding an event at a school. Two more cases were subsequently filed against him. He was given bail in two cases by a local court earlier this month, but remains arrested in another case.

Rupesh Kumar Singh, a freelance journalist in Jharkhand, was arrested in July 2022 under the UAPA. Two other cases were filed against him later.

Over the past year, Iran has been the worst offender, arresting “dozens of journalists” during the crackdown on protests sparked by the death in police custody of Mahsa Amini, a 22-year-old Kurdish woman arrested for allegedly breaking Iran’s hijab law.

“Authorities have imprisoned a record number of female journalists – 22 out of the 49 arrested since the start of the protests are women – a reflection of the prominent role they’ve played in covering this women-led uprising,” CPJ said.

In China, authorities tightened online censorship during recent protests over the government’s zero-COVID lockdown policies and several journalists are reported to have been briefly detained while covering the demonstrations.

“In countries ranging from Russia to Nicaragua to Afghanistan, independent media outlets have been gutted as reporters flee into exile or are intimidated into self-censorship. While suppressive strategies differ between countries, the cases documented in CPJ’s census “share a common thread of official cruelty and vindictiveness”, the organisation said.

The report added that imprisoning journalists is “just one measure” of how authoritarian leaders try to strangle press freedom. “Around the world, governments are also honing tactics like ‘fake news’ laws, are using criminal defamation and vaguely worded legislation to criminalise journalism, are ignoring the rule of law and abusing the judicial system, and are exploiting technology to spy on reporters and their families,” CPJ said.