How the Modi Government Manufactured Public Opinion During the Migrant Crisis 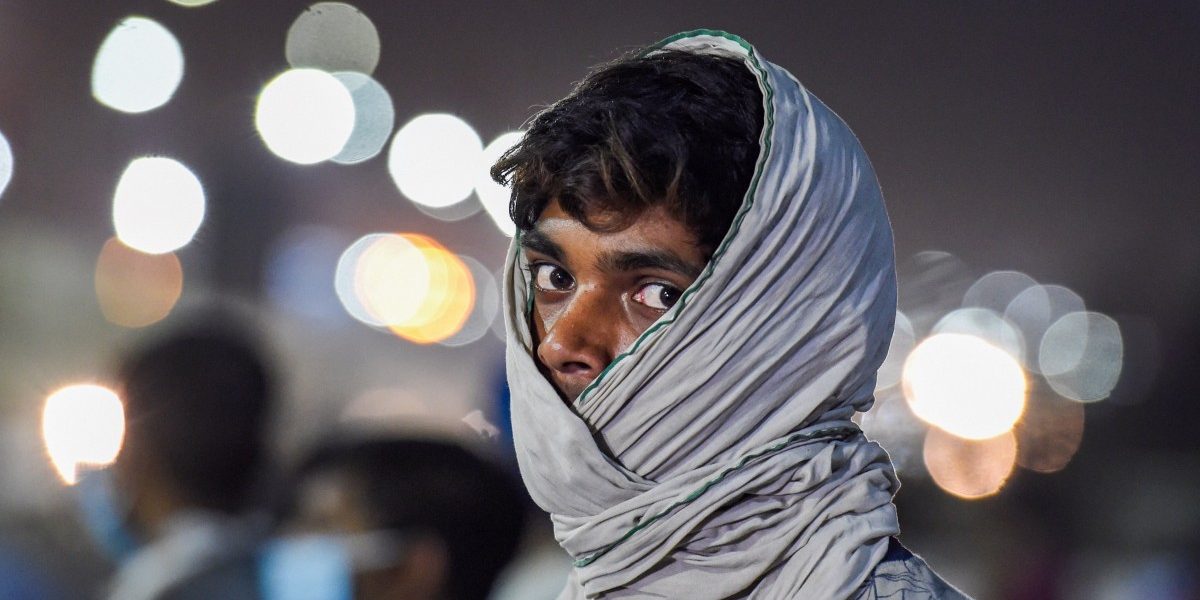 A migrant walks along a road to reach his native place, near Ghazipur border in New Delhi, May 15, 2020. Photo: PTI/Atul Yadav 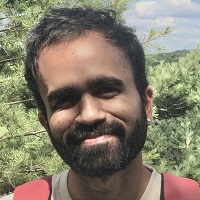 It is no secret that India has crores of daily-wage migrant workers who live extraordinarily precarious lives. By extension, it should surprise no one – especially not the government – that a complete nationwide lockdown announced with merely four hours notice led to the largest migrant crisis since India’s Partition.

Countless heart-wrenching images and accounts of hunger, homelessness, suffering and death of migrants have been circulated on social media for months, and the crisis continues. And yet, surprisingly, the government’s apathy towards migrants has not result in country-wide protests. In fact, Prime Minister Narendra Modi’s approval ratings are said to have increased amidst the migrant crisis.

How could this be possible? The answer is a successful public opinion management effort by the Modi government, in which the mainstream media played a central role.

A tragedy that absolves the state

Suffering due to the COVID-19 pandemic is, unfortunately, inevitable. But government policies sharply determine the magnitude of this tragedy, and the mainstream media has dangerously blurred the distinction between what is and isn’t in the government’s control. Whenever the migrant crisis has been covered, it is portrayed either as a tragedy or natural calamity. It is not reported as a result of disastrous state policies – which it is – nor as an opportunity to demand urgent action from the state.

Examples below from leading Hindi newspapers show that while reporting on the most horrifying moments of the migrant crisis, such as major accidents on May 8 in Aurangabad and May 16 in Auraiya which killed dozens of migrants, newspapers at best expressed sadness and at worst blamed careless driving – and did not question the government’s pandemic policies. This style of coverage was the general trend, extending beyond the coverage of these accidents. Often, as the examples show, this crisis was depicted as a tale of bravery and optimism. 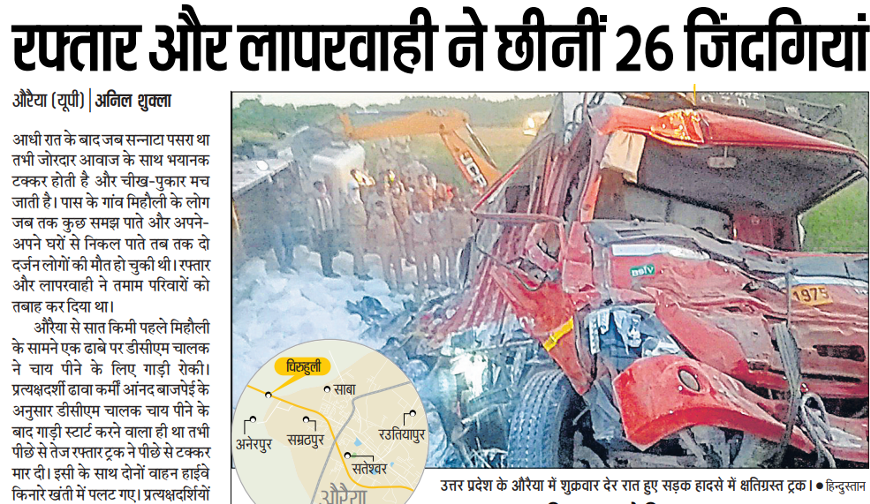 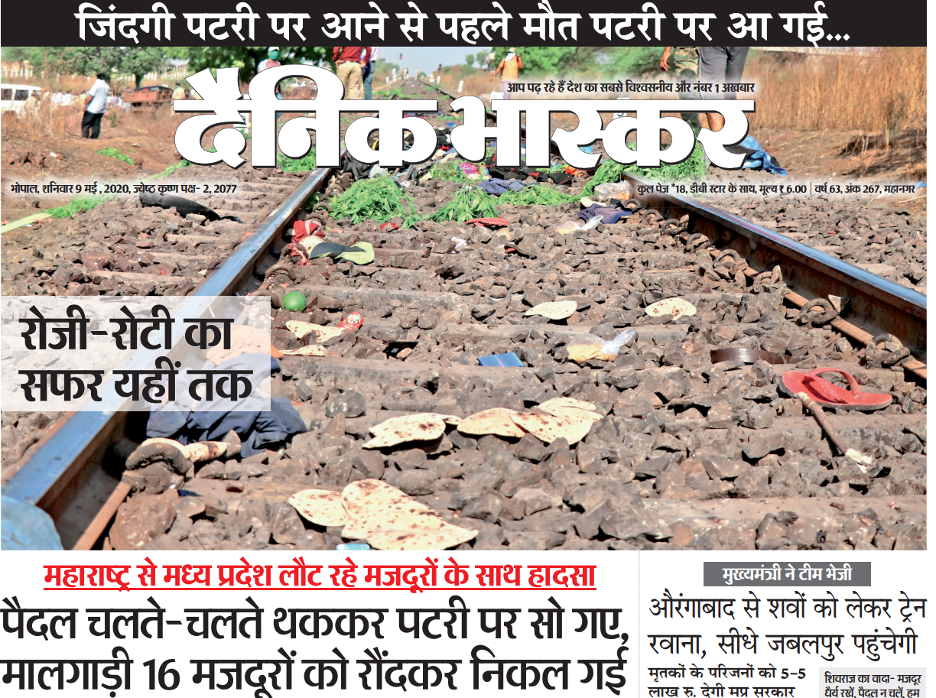 “Death before life could get back on track: the journey of survival ends here. Migrants tired from walking slept on the train track, freight train crushed 16 of them.” Dainik Bhaskar (Bhopal), May 9. 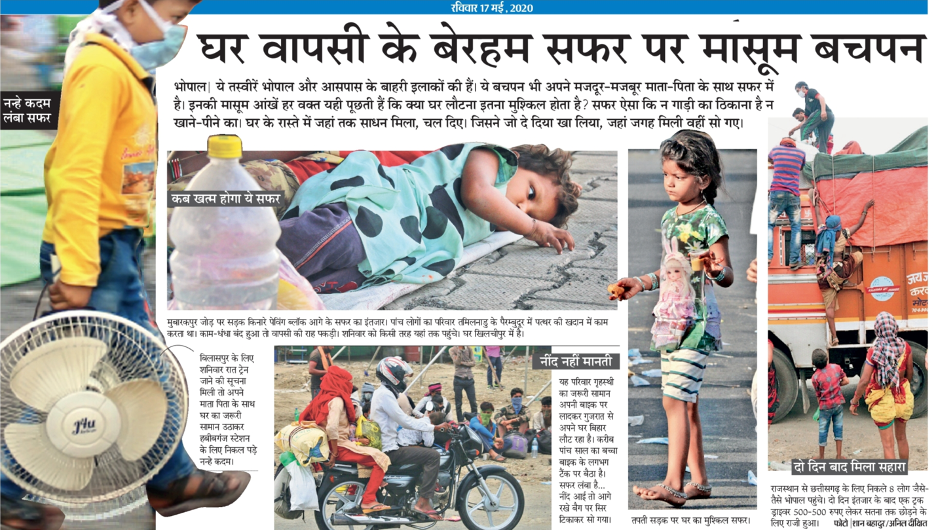 “Innocent childhood in an arduous journey back home”. Dainik Bhaskar (Bhopal), May 17. 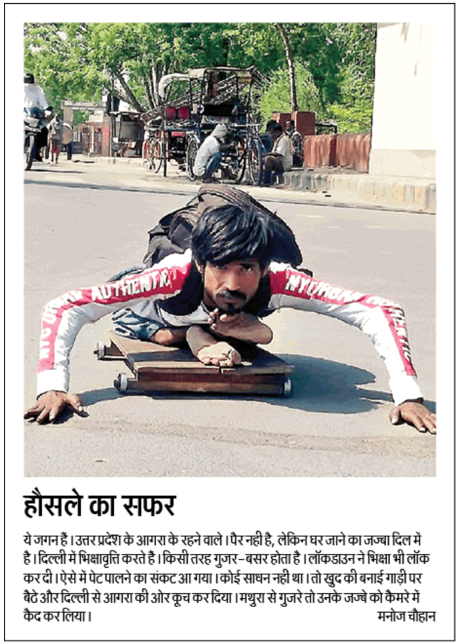 “A courageous journey”. This man’s decision to travel hundreds of kilometers despite his disability is praised as “determination”. Dainik Jagran (National Edition), May 17. 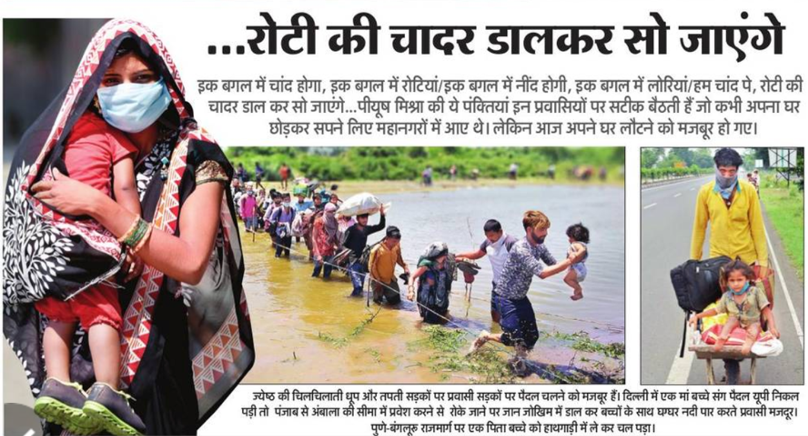 Title references a song about the will to survive in abject poverty. Amar Ujala (Lucknow), May 17.

At best, this type of coverage allows collective sympathy and mourning, and perhaps encourages relief work undertaken by civilians, but it completely absolves the state. It makes it possible for people to not be enraged at Modi for eventually easing the lockdown, allowing migrants to make journeys that they could have made two months ago, when the cases were fewer and so much suffering could have been avoided.

Creating distractions and controlling the narrative

Scholars studying the media have noted that news media does not tell people what to think, but what to think about. After the lockdown was announced on March 24, the chaos at Anand Vihar Bus Terminal around March 28 marked the beginning of the migrant crisis. But for weeks after March 30, public discourse was relentlessly focused on Tablighi Jamaat and “corona jihad”.

There were other distractions too. Modi asking people to light diyas, Modi asking that they bang utensils, army helicopters flying over hospitals and showering petals – these were media spectacles designed to generate coverage that drowned everything else. What did these celebrations do for the migrants who died of hunger?

The valorisation of the police as “corona warriors” severely obfuscated high levels of police brutality against migrants and the poor. In enforcing the lockdown, the police beat people to death; the police attacked migrants whose crime was walking hundreds of kilometres with barely any food and water, and dying during their journeys. The police is a key organ of state’s power, and the state will do its best to protect it – the US prison-industrial complex is a prime example. Therefore it should not come as a surprise that the Modi government carried out a concerted and successful effort to control the narrative around the police.

Each of Modi’s addresses to the nation were heavily covered in the media, which mainly focused on unity, patriotism, rhetoric of war, sacrifice and optimism. Rather than a substantive account of government policy, it will be more appropriate to see these addresses as public relations stunts. Modi’s rhetoric tightly controlled the public discourse because critiquing government policy became unpatriotic.

India’s press freedom rankings have deteriorated consistently in recent years, but one can still wonder – how exactly does the state control media coverage of such a major migrant crisis?

The mechanisms of controlling the media are numerous. Hours before the lockdown, Modi reportedly asked print-media owners and editors in a meeting to refrain from negative coverage. This was not a conspiracy; it was a public and even publicised event. Instead of being outraged, journalists gleefully talked about this event on social media, and agreed to comply. The patriotic image of Modi, the “war” like situation, as well as the cozy state-press relationship results in feel-good and optimistic news coverage of the pandemic.

It is difficult for a state, especially a democratic one, to censor information that has already been published. A more sophisticated method of censorship is controlling availability and access to information. In the case of migrant crisis, press conferences is where journalists can question government officials on its policies. Yet, it has been widely noted how the Modi government put restrictions on who can attend these conferences and what questions are asked. In these conferences, government officials focused strongly on the Tablighi Jamaat, leaving little room for anything else, which shapes the news coverage. Moreover, it is easier for the media to publish official statements as is, rather than invest resources or take the legal risk to challenge them – after all, commercial news media is a money-making business.

And in cases where the news coverage is critical of government policies, journalists are prosecuted. Last month, the Editors Guild of India expressed concern over “a growing patter of misuse of criminal laws to intimate journalists” and the International Press Institute released a similar statement. It is not necessary to prosecute each instance of critical reporting – legal harassment and action against a few serves as a deterrent for others.

No matter how successful the state is in skewing reality according to its whims, the voices of the oppressed cannot be erased. Eventually, our society will have to face the migrant, who while walking for six days with his children and wife and still far from home said, crying: “Modi ji did a great thing by doing what he did, it’s great for us. He is comfortable and in one place, isn’t he? Should he not have thought about us, the poor? I guess it’s fine, my kids and I will die.”

Aman Abhishek is a PhD student in media studies at University of Wisconsin-Madison, USA.