That the surge in India comes at a time when the world is seeing the first signs of recovery from the yearlong crisis has led to renewed global focus on the image-conscious Narendra Modi government. 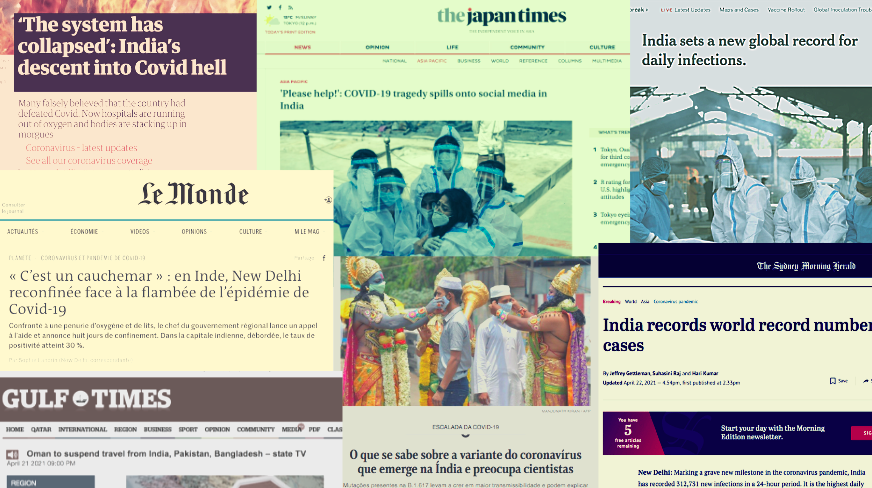 New Delhi: India has hit the grave milestone of the highest ever single-day spike in COVID-19 cases in the world since the pandemic begun, and the world appears to have taken note, not just of the numbers but the crises that have accompanied them.

News outlets across the world have focused pieces – ranging from op-eds to detailed reports – on India’s situation and the lack of governance in key aspects that led to it.

The national capital is held hostage by an unprecedented shortage in medical oxygen and burial grounds and crematoria across the country are running out of space at a time when with the kicking off of vaccination drives worldwide, the end to the pandemic had appeared near.

This has led to renewed global focus on the image conscious Narendra Modi government.

While global media reports deal largely with events and aspects of the crisis reported exhaustively by sections of India media, a study of them is worthwhile chiefly to note how India’s handling of the second wave has reflected worldwide.

Among publications that have minced no words in holding the Centre accountable is The Guardian in England, which on April 21 ran a reported piece direly headlined ‘‘The system has collapsed’: India’s descent into Covid hell’.

The piece begins with Modi’s now infamous musing at a rally in Bengal, on the fact that he has not seen such large crowds before. COVID-19 guidelines prohibit large gatherings and call for social distancing.

On April 22, meanwhile, West Bengal goes into the sixth phase of its eight-step election.

“In West Bengal, where Modi’s government has refused to curtail the drawn-out state elections that his Bharatiya Janata Party (BJP) is hoping to win, Modi and his home minister, Amit Shah, continued their public meetings and roadshows into this week even as queues of ambulances lined up outside hospitals across India,” the piece by Hannah Ellis-Petersen notes.

It also delves into warning given by healthcare professionals, which appear to have been ignored by the Modi government, thus leading to the crisis. 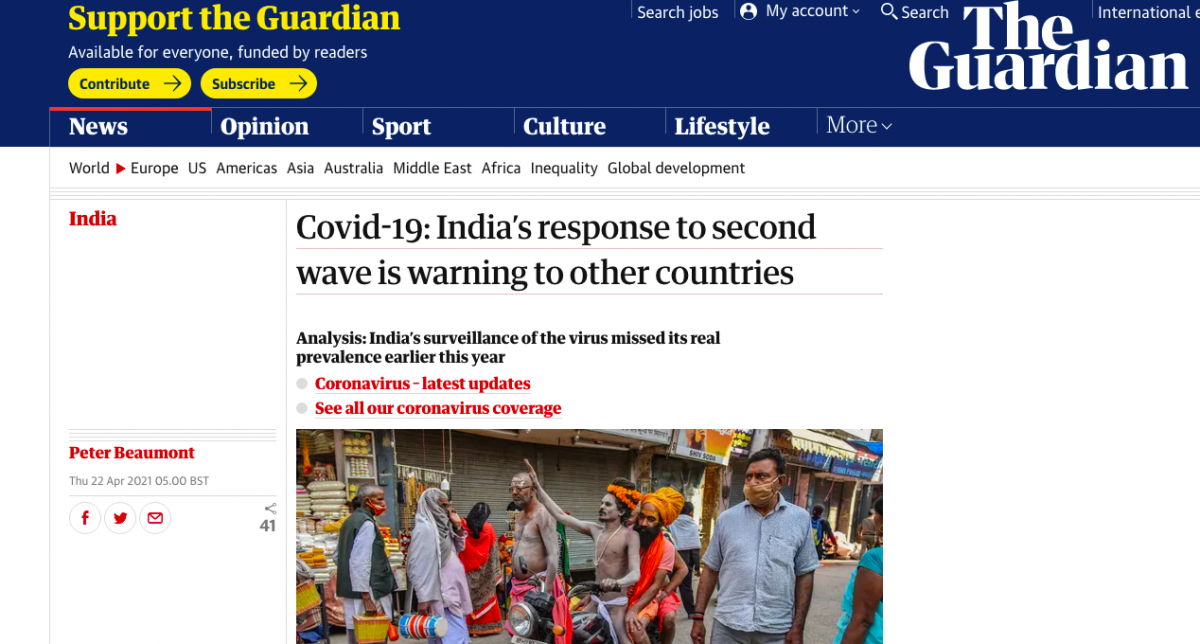 An analytical report on India’s COVID-19 crisis on ‘The Guardian’.

The Guardian also notes a long-suspected and little reported aspect of the crisis – that the true toll might have been fudged in states like Gujarat and Uttar Pradesh, where “numbers of bodies stacking up in hospital morgues far outnumber…official fatality figures.”

In a far more scathing analysis on April 22 by Peter Beaumont, The Guardian notes that ‘India’s response to second wave is warning to other countries’. With numbers that illustrate how complacency at various levels has been disastrous for India, Beaumont’s piece notes an essential folly:

“Boosterism (like Modi’s around India’s vaccine production) and the encouragement of normalcy bias (which leads people to minimise threats when confronted by serious risks) have real impacts in public health emergencies that rely on encouraging people to be careful.”

From the same country, the Daily Mail tabloid’s report focusing primarily on COVID-19 numbers and the Nashik oxygen tanker leak which killed 22 people, makes note of an interesting humanitarian aspect:

“Officers were seen thrashing locals with sticks and forcing them to perform sit-ups and press-ups in the street in Chattarpur as authorities struggled to contain the deadly new variant which appears to be affecting younger people.” The New York Times, in addition to daily reports in its international edition on the spiralling crisis in India, ran an opinions piece by economist and epidemiologist Ramanan Laxminarayan on how ‘India’s Second Covid Wave Is Completely Out of Control.’

From the populated Kumbh Mela in Haridwar, to crowded election campaigns and then to a situation where the city of Bhopal has had to note that cremations in the current day compare only to the time of the 1984 Union Carbide gas tragedy.

Laxminarayan directly pins the blame on “complacency and lack of preparation by the government,” observing how the government, “cheered on by a pliant, triumphalist media, prematurely declared victory against the pandemic” at a time when it should not have.

NYT is also one to observe the disparity of the situation between India and the Global North.

“As cases worldwide reach new weekly records, 40 percent of the infections are coming from India, a sobering reminder that the pandemic is far from over, even as infections decline and vaccinations speed ahead in the United States and other wealthy parts of the world,” the latest report on India in NYT notes.

France’s Le Monde focused its latest report on the crisis of medical oxygen, especially in New Delhi. It quotes healthcare professionals as observing that they have “never seen such a crisis” in their lifetime. Overwhelmed testing centres, crematoria and burial grounds form the central focus of the French language report, which also quotes Chief Minister Arvind Kejriwal amidst his clamour for Central help.

The France outlet’s April 19 report on India contrasts with the lead piece on its website right now, where authorities of a Lyon hospital note, “We have the impression that the worst is over…”

For Brazil’s newspaper of record O Globo, India’s crisis occupies central space with a report that aims to explain what is known on the coronavirus variant that has emerged in India. Eastwards, the Japan Times reported on how in the absence of communication from the government, the crisis involving shortage of key medical supplies spilled on to social media.

The report notes how news feed on Facebook, Twitter and Instagram has been flooded either with information on bed availability or with fervent pleas for oxygen cylinders or medicines. It quotes a Delhi resident as having said, “I cannot process what I am reading on social media. I feel numb.”

The lead slot of Australia’s Sydney Morning Herald is occupied by a report on Prime Minister Scott Morrison announcing details of the country’s vaccination drive and the Cabinet agreeing on “strict new measures on travel from India after an alarming surge in the number cases in the country.”

Also in the lead slot is the report on India breaking world records with the single-day tally, with note of Modi, his rallies and his government’s endorsement of the Kumbh Mela.

“States and cities are increasingly going into lockdown on their own, and critics say the government’s mixed messages are making matters worse.

“As examples, they point to recent political rallies held by Modi that have drawn thousands, as well as the government’s decision to allow an enormous Hindu festival to continue despite signs that it has become a superspreader event.”

This April 21 record set by India is also at the centre of the Gulf Times’ coverage of the COVID-19 crisis. Additionally, the outlet has noted how Oman has announced a suspension of travel from India.