It's Essential to Sift Through Hate-Driven Misinformation on Coronavirus

A study of misinformation around COVID-19 will show that a significant part of the stories doing their rounds have a strong hate speech component. 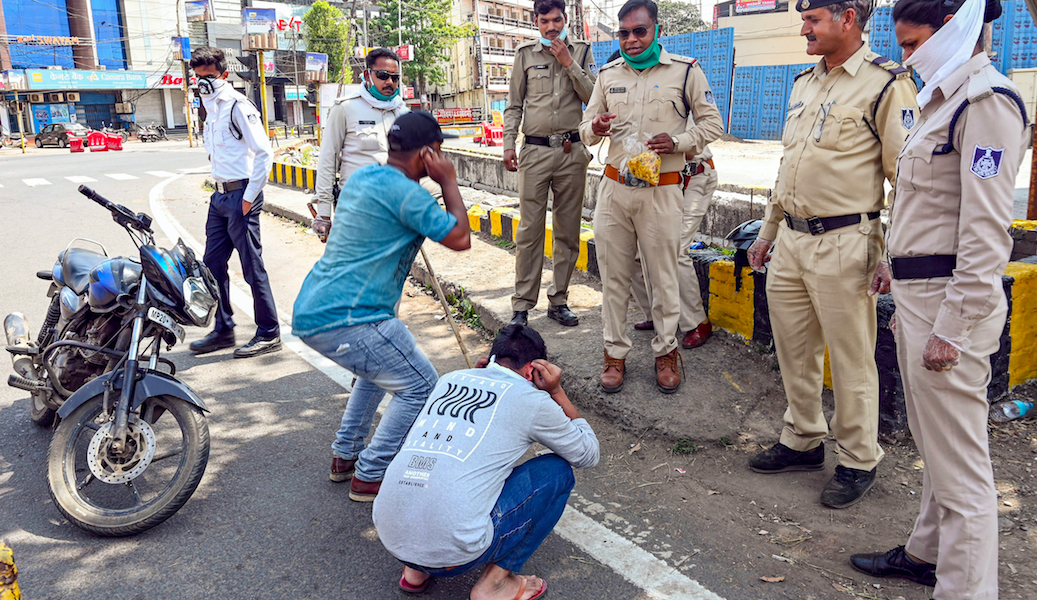 When Donald Trump referred to COVID-19 as the ‘Chinese virus’, the only praise outside of xenophobic rancour, was for the grammarian turn in avoiding ‘China virus,’ or worse, ‘Kung Flu’ both of which would emerge as trending hashtags on Twitter.

While the US President’s leadership in promoting and often authoring misinformation about the virus, the dig at the Chinese was part of a larger, global phenomenon that has been at the heart of a toxic media environment. What leaders say, how and when they say it, matters immensely for the information environment to follow.

A study of misinformation around COVID-19 will show that a significant part of the stories doing their rounds have a strong hate speech component, aimed primarily at Chinese people and their assumed cultural, culinary, and social practices. Trump’s bluster did little to address the issue, but exacerbated attacks against, and a sense of alienation among Chinese Americans.

In the three weeks following Narendra Modi’s announcement of a lockdown, digital media consumption will only soar, and with the uncertainty and anxiety over COVID, we can be rest assured that a flood of misinformation will flow our way.

Modi’s style and history of outreach, especially during times of crisis, is going to play a role in how the information environment will unfold in coming weeks.

In general, our misinformation ecology has artefacts on a spectrum of malicious intent including ill-informed claims, clickbait headlines, news out of context, manipulation, and outright fabrication. Of these, the first, rooted in ignorance or what scholarship refers to as belief perseverance, and the last – intentional disinformation, are likely to cross our paths on a daily basis.

We studied debunked misinformation, primarily from six fact-checking sites, to map the stylistic elements of misinformation, and the thematic trends in the content doing rounds. We related these to the events of the week to understand what these may mean for the future.

The style of misinformation posts can vary depending on the scope, aim, and sophistication of those putting it out. In this, misinformation is comparable to phishing attempts, there are often clues in the text that allow a trained eye to find reason for suspicion. While some misinformation is easier detected with the typical call for urgency and viral spread accompanied by bad grammar, much of what we get as messages can be sophisticated, but also relatively more genuine since it is rooted in ignorance rather than mal-intent.

Misinformation is frequently presented as a formal announcement on a letterhead or a screenshot of a Tweet or Facebook post, which serves as a legitimating factor for the information nested in the message. This of course also serves as a means of verifying the information. A common ruse is to retouch spaces beneath the masthead of a news organisation or “breaking news” with false information. 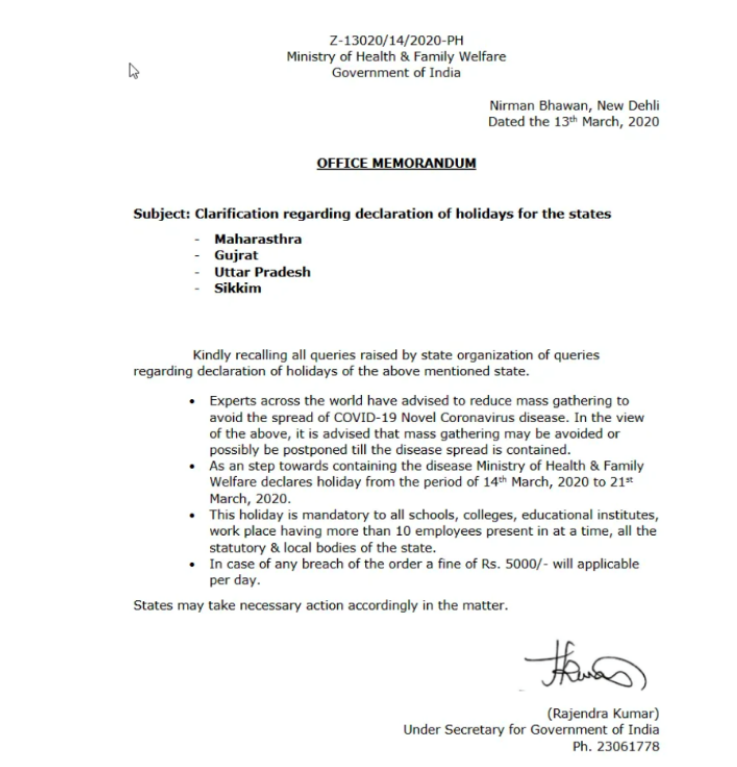 Figure 1: Fake memorandum stylised as an official document on a MoHFW letter head with a vague signatory (Source: Alt News)

A lot of malicious disinformation uses very specific details as a means of signalling veracity – such as temperature of drinking water to be consumed to avoid a condition, time intervals for treatments, or size of the virus in microns, but lack a verifiable source.

Official announcements or information from mainstream media sources rarely include lurid images of suffering. However, targeted disinformation often includes exaggerated language alongside distressing imagery as a means of engineering affect. 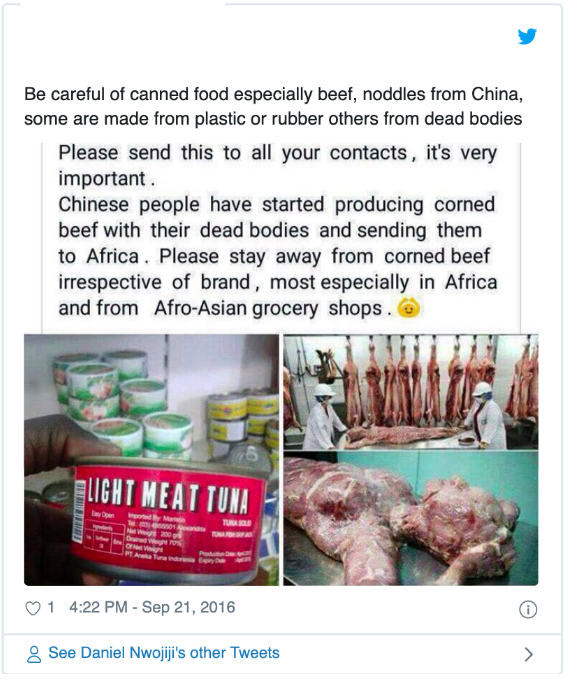 A number of the misinformation items we found had uncredited images of East Asians taken out of context – such as Asian markets, to suggest trading in dangerous goods, or police, to suggest the heavy hand of the state in quashing the virus 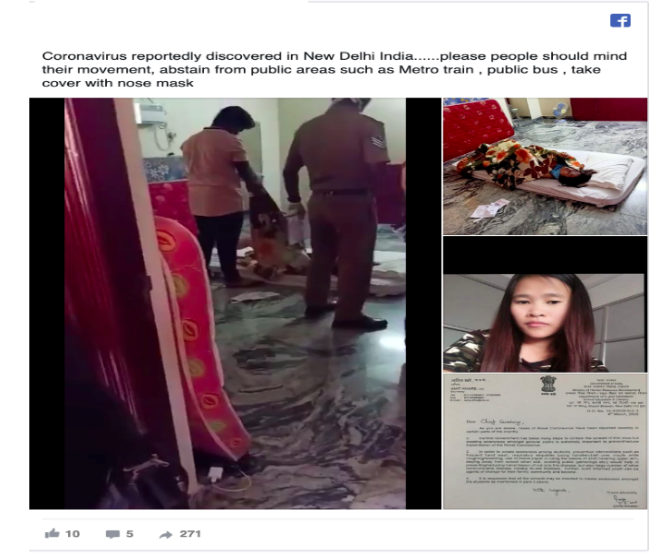 Figure 3: East Asian features of a woman from the North East used to suggest she was a Coronavirus casualty (Source: Webqoof)

Some of the fastest travelling misinformation has come from public figures airing unenlightened views. These highly influential social media influencers including Amitabh Bachchan, Rajinikanth, Pawan Kalyan, Mohanlal as well as a number of lower-level celebrities have put forth non-empirical claims on the role of traditional Indian practices in tackling COVID-19.

COVID-related misinformation follows some of the same overall thematic patterns as other “fake news” that crosses our path. In this case, the global media panic, and a lack of recent historical experience in dealing with such health crises has enabled an environment for an extraordinary number of mis-informational messages that are either deliberate mischief or generated and spread out of ignorance.

Thus the thematic patterns we observed in COVID-19 misinformation include elements that cause alarm, that suggest a rectification of a situation, that offer explanations for a situation, or which enable connections to pre-existing prejudices are seen here as well.

Alarmist misinformation makes claims around the scale or intensity of a crisis – such as the number of casualties and speed of intensification or through shocking images of patients and pain, as a means of getting the attention of a reader.

Another alarmist technique we found was the use of conspiracy theories which suggest that the virus is bigger than its natural ability to spread, and that foreign forces are in play to undermine the security and health of people. 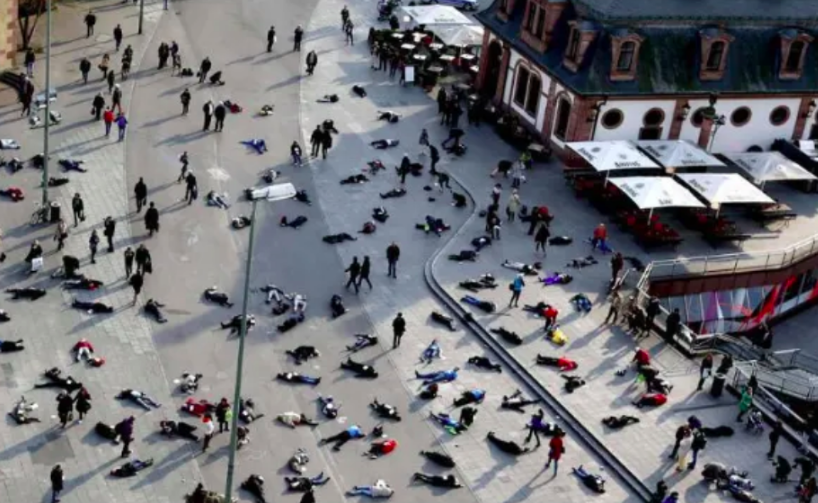 Figure 4: Image from an art project in Germany attributed as Coronavirus deaths on the streets of Wuhan (Source: Webqoof)

Rectificational misinformation makes claims around what can fix a situation. In the case of COVID-19, this has included messaging that presents physical action as well as natural or chemical compounds that are presented as cure. Examples include home remedies such as variants of garlic water, and recommendations to use alcohol or cannabis.

A line of misinformation unique to India has been messages that propose Ayurvedic treatment or the use of bovine excrement as a preventative substance – some of these claims have come from official sources or mainstream media. A recent spurt of cure-related misinformation has come in the aftermath of the ‘janata curfew’ and its clapping exercise, in which people, including celebrities, have claimed a curative potential. 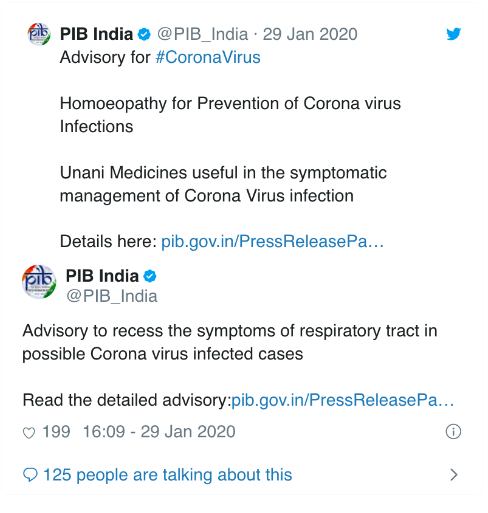 Nature and the environment

A significant set of misinforming messages has speculated on causes of the crisis, which in the case of COVID-19 have been largely about the natural world. Misinformation has circulated about the animal origins of COVID-19, which have extended into cultural claims of vegetarian lifestyle superiority.

There are a number of images in circulation taken from commercial farming operations, or meat markets, all of which ride on narratives of eating habits to get viral circulation. A curious new strand of nature-related misinformation has emerged on unverified positive effects of COVID-19 shutdowns such as dolphins returning to crystal blue waters in Venice. 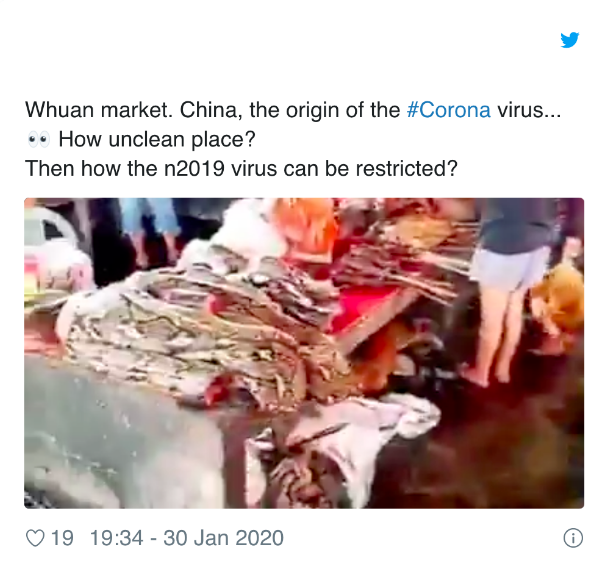 Finally, we find that a sizeable chunk of misinformation is around culture – either as an object of blame or one of resistance. A number of messages aimed at Chinese culture as responsible for the crisis, while others have claimed that faiths such as Islam or Hinduism offer means of resistance to the disease.

Such messages can often be a means of reinforcing existing prejudices. On Indian social media, messaging about ancient wisdom related to astrology, positive vibrations, or cow urine have been widely circulated. Presenting one culture as fundamentally responsible or better equipped to deal with the crisis moves the objective of response from coping to denunciation.

Figure7: Baba Ramdev targeted with an old image for being hospitalized due to consumption of cow urine and being infected by Coronavirus (Source: Webqoof)

Prime Minister Narendra Modi’s declaration of shutdown offered insight into why misinformation around the coronavirus may explode, than subside. While the extreme step of a complete three week shutdown sent out a powerful signal on the gravity of social distancing as seen by the administration seen by the administration, the message and its delivery may be the enabler of more spectacle.

Modi’s fondness for 8 pm performances, and history for setting up big surprises for the people, are fodder for speculation. In his missive a few days ago, Modi asked citizens for a few weeks of their time.

On Tuesday, he reminded people in his speech that they had been warned, in effect congratulating those who bet correctly on his next move right. Rather than begin the speech with assurances on how their daily lives will be enabled, Modi used the apocalyptic metaphor of a ‘lakshman rekha’ which almost immediately caused a dangerous rush on markets to hoard supplies.

In the days following demonetisation, misinformation was rife, in part because the government itself changed its story from week to week to keep up with the stagecraft of the prime minister’s astounding announcement.

Our current crisis is several times more severe. The prime minister and government in general, in eschewing regularly engaging the people in favour of unilateral ‘surgical strikes’ enacted with surprise, enable an environment in which we lay in wait for the next prime-time missive on what comes next.

Misinformation exists because uncertainty exists. And when uncertainty becomes an axiomatic communicative strategy, rumour is our best relief.

Joyojeet Pal (@joyopal) is an Associate Professor at the University of Michigan, where his research focuses on on social media use in by political leaders. Syeda Zainab Akbar (@syedazainaba) is a researcher.