With no internet in play, the only way to send in stories has been by travelling to Srinagar to access the internet at the makeshift media facilitation centre.

An Indian security force personnel keeps guard alongside a road during restrictions after the government scrapped the special constitutional status for Kashmir, in Srinagar. Photo: Reuters

Srinagar: More than two months since August 5, when a communication clampdown was enforced across the Valley just hours before the reading down of Article 370 in parliament, among the stories of hardship emerging are those of the story writers themselves – in this case, district correspondents.

One such correspondent, who asked to not be named, recently came to know that the publication he reported for has decided to end his contract.

Cut off from his editors thanks to defunct phone lines and snapped internet services, the correspondent was unable to send in any reports for publication; in fact, he could barely step out of his home or stay in touch with other reporters and stringers in the district.

The communications shutdown has caused a slew of problems for everybody in the Valley, yet many of these have remained under-reported since district reporters were themselves left crippled and unable to cover important events and the law and order situation.

“In earlier years like 2016, when the situation was bad, we could still work and file reports as the phones would work and at least 2G internet would be available after some time. But this time, this has been an unprecedented lockdown,” the reporter said.

Given the climate of fear, it has been difficult for district reporters like him to even identify themselves as journalists while moving around in the district, he said, as police do not respect their press cards. He said they have been made to feel unwelcome by the police and other district authorities. Correspondents have also not been able to move around because of the restrictions imposed by the authorities. There was also no way of being able to reach district officials on the phone to get their version even if they managed to file a report.

With no internet in play, the only way to send in stories has been by travelling to Srinagar to access the internet at the makeshift media facilitation centre set up in a hotel by the information department, or to send it along with another colleague going to Srinagar.

“How could we reach the media centre every day from our districts amid the shutdown and restrictions? It was too far for us and too costly to regularly travel to the centre and come back,” he said. “The authorities also didn’t allow us to access the internet and send our reports at the DC offices where some internet facility was provided to students.”

Since August 5, the number of stories waiting to be told have been piling up – from the detention of political prisoners, the conversion of government buildings into sub-jails and the arrests of several youth in the district. 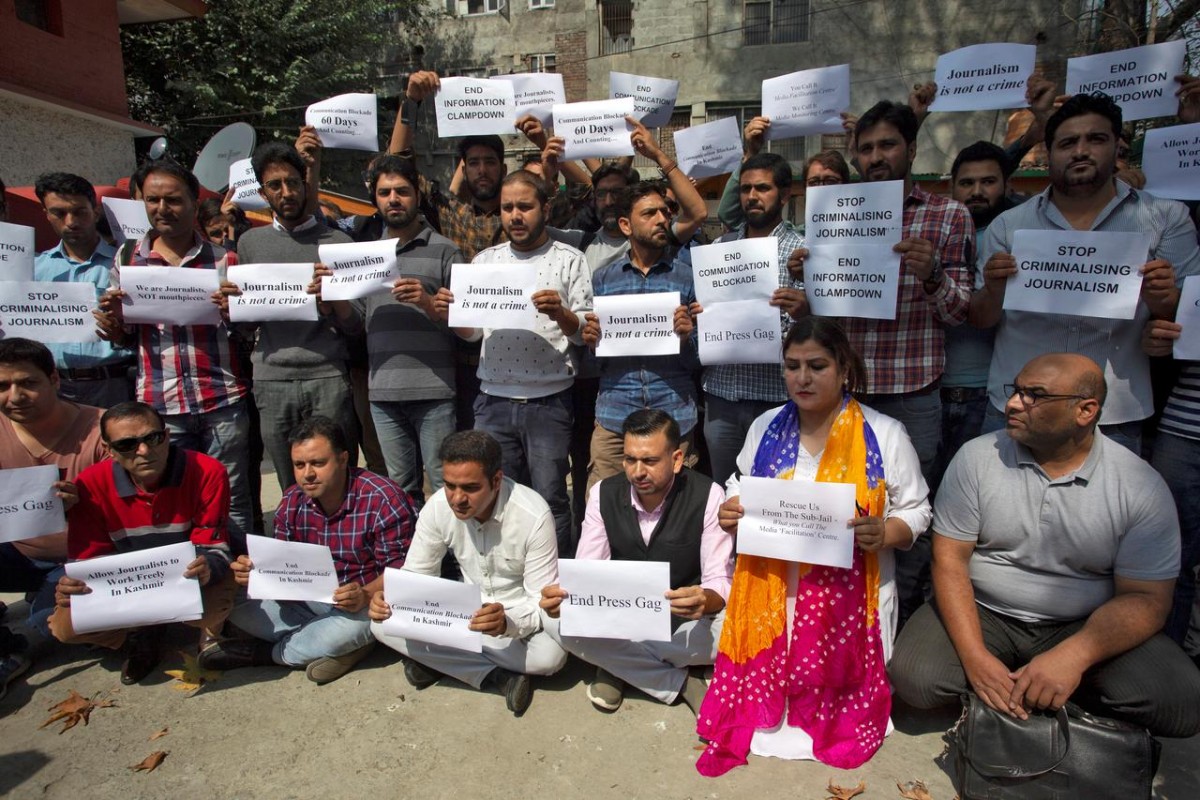 Journalists hold placards as they attend a silent protest against the communication blockade, in Srinagar, October 3, 2019. Photo: Reuters/Shakeel-ur-Rehman

“We couldn’t even report on developmental stories and stories of public concern in these two months leave alone reporting on the political and human rights situation in the district,” he said. “We were confined to the four walls of our homes at a time when we should have been working in the field.”

Ishfaq Reshi, who reports for the daily Kashmir Reader from central Kashmir’s Budgam district, said that he and his colleagues in the district haven’t been able to report anything for the past two months, including incidents of fires in shops and government complexes which went unreported, due to the total communication shutdown.

“We had no means to contact our offices and editors and we couldn’t seek any information from the district officials,” said Reshi. “There was also the fear of being singled out by the district police and other authorities if we managed to send out any report that went against their claims.”

Owaise Farooqi, another district reporter who reports for Kashmir Reader from north Kashmir’s Bandipora district, said that till mid September they were afraid to even venture out of their homes. He too has been unable to file any report from the district for more than two months.

“I was only recently able to get in touch with my office after they restored postpaid mobile phones,” said Farooqi. “If at least our phones were working and we were allowed to move around freely, we would have sent in many reports from the district. But we were afraid to show our press cards to the police and other government officials.”

Farooqi said that over the past few weeks, some district reporters and correspondents managed to send their stories through some friends on pen drives which were subsequently dropped off at the offices of their organisations in Srinagar.

Muneeb-ul-Islam, a freelance photojournalist based in south Kashmir, said the district correspondents and reporters in Islamabad district were not given a separate internet facility by the district administration despite taking up the matter with several district officials, including the DC.

“Even now, we are not able to access internet and send our stories and photo shoots as no internet facility has been provided to the journalist community in the district,” said Islam. “We have to hire some vehicle or send our work via pen drives to Srinagar.”

Islam said photojournalists and reporters tried to gather information a few days after the lockdown began, but he said they were told by the authorities to stop.  Since their journalist ID cards were not being respected, they remained confined to their homes.

On the night of August 14, Irfan Malik, a Greater Kashmir reporter who covered south Kashmir’s Tral district, was also taken from his home in Tral and locked in a local police station. He was released on August 17 after his arrest created a furore.

Waseem Dar, a young freelance video and photojournalist who has contributed to several local print and web publications from south Kashmir, had no idea of what was happening in the district since there was no means of communication after internet and mobile phones were shutdown on August 5.

Before August 4, Dar and his colleagues in the district would contact each other on phone every time they would hear of an incident or an encounter in the district. Then they would move together to cover the events. After August 5, he was suddenly disconnected from his colleagues and editors. There was no means of communication to reach the incident spot in time to cover it.

Unable to access internet and having lost contact with the editors of different publications he regularly contributed for from the district, he was also not able to work in the past two months due to the communications shutdown, internet blockade and the restrictions imposed by the authorities.

Dar said he could access internet only a few days ago after he travelled to Srinagar to check his email at the media facilitation centre. “I could see many emails from some publications asking for video footage and photos which I couldn’t send since we had no access to internet in our district,” said Dar.

Islam also lost his source of income as he couldn’t shoot and send his work to the different publications where he regularly contributed.

“Last month, I was forced to do some labour work to earn some income for my family since I have not worked in the past two months,” said Islam. “I don’t think I can earn my livelihood from this profession if the situation remains the same for us.”