The coverage was overwhelmingly positive, with no indication to readers that such news was paid for.

Chinese President Xi Jinping speaks during an event to commemorate the 40th anniversary of the "Message to Compatriots in Taiwan" at the Great Hall of the People in Beijing, China, on January 2, 2019. Media persons can be seen as well. Photo: Mark Schiefelbein/Pool via Reuters/File Photo

Taipei: The articles on the website of the leading Taiwan newspaper were gushing about a new Chinese government programme to lure Taiwanese entrepreneurs to the mainland.

China “treated Taiwanese businessmen like its own people,” one of the articles said, citing “multiple perks”. Far from being a threat to Taiwan, the program to give economic incentives to Taiwanese to start businesses in the mainland was an “unprecedented” opportunity, it said.

While the articles were presented as straight news, they were actually paid for by the Chinese government, according to a person with direct knowledge of the arrangement and internal documents from the Taipei-based newspaper.

The placement of the articles was part of a broader campaign by China to burnish its image in the Taiwanese media as part of efforts to win hearts and minds in Taiwan for China’s “reunification” agenda.

Reuters has found evidence that mainland authorities have paid at least five Taiwan media groups for coverage in various publications and on a television channel, according to interviews with 10 reporters and newsroom managers as well as internal documents reviewed by Reuters, including contracts signed by the Taiwan Affairs Office, which is responsible for overseeing China’s policies toward Taiwan.

These efforts have been going on since China and Taiwan deepened their economic collaboration nearly a decade ago, but details like the financial arrangements of such partnerships had not previously been reported.

Reuters is withholding the name of the media groups at the request of the former and current employees who provided the documents.

The Taiwan Affairs Office paid 30,000 yuan ($4,300) for the two feature stories about the mainland’s efforts to attract Taiwan business people, according to a person familiar with the arrangements and internal documents from the newspaper.

“It felt like I was running propaganda and working for the Chinese government,” the person said. 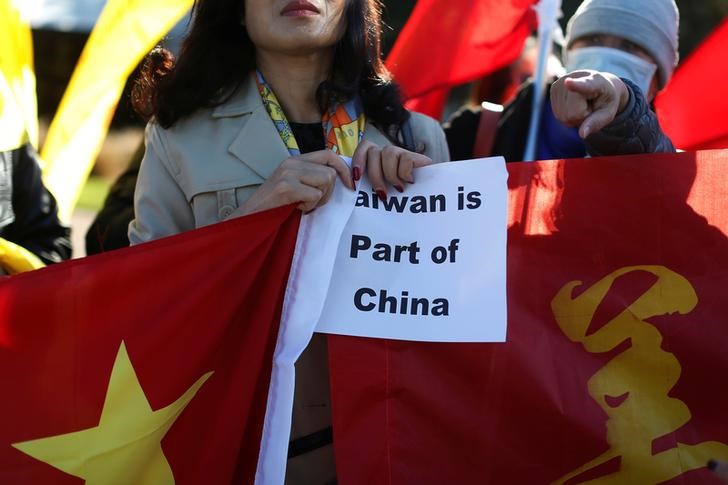 A demonstrator holds a sign in support of China during Taiwanese President Tsai Ing-wen’s stop-over after her visit to Latin America in Burlingame, California, US in 2017. Photo: Stephen Lam/Reuters

The placement of news stories by companies and special interests is common in Taiwan. However, the commissioning of such stories by China is potentially explosive on the island, which has been increasingly sensitive about mainland efforts to sway popular sentiment amid rising tensions across the strait.

While the Taiwan Affairs Office paid for most of the stories in the documents reviewed by Reuters, other Chinese government bodies also commissioned stories, according to three people with direct knowledge of the matter. One of the contracts was signed by a municipal government in southern China.

Also read: For the Media to Regain Credibility, the Business of News Needs to Change

China has viewed self-ruled Taiwan as a wayward province to be brought under its control, by force if necessary, since a civil war divided the two in 1949.

One senior news manager said he handled stories paid for by the Chinese government at a major newspaper for several years. He left the publication in 2016 and now works for a news organisation affiliated with the Taiwan government.

“The money was mostly paid via the Taiwan Affairs Office,” said the person, adding that provincial or municipal governments across China also sponsored coverage.

The Taiwanese government said it was aware of the Chinese efforts and that such partnerships were subject to a fine of up to T$500,000 ($16,000) for violating regulations on Chinese advertisements.

“It is using our press freedom to harm press freedom,” Chiu Chui-cheng, the deputy minister for Taiwan’s Ministry of Mainland Affairs, told Reuters. “This is part of the mainland’s media war against Taiwan,” he said, vowing to strengthen laws to close what he called “loopholes” in Taiwan’s national security.

The Mainland Affairs Council said in a statement late on Friday that the related authorities would look into the issues raised in the Reuters article.

“The Mainland Affairs Council seriously urges the Beijing authorities to immediately stop such clumsy and inferior actions and to stop the wishful thinking that it could replicate the way it controls media domestically in Taiwan,” it wrote.

The Taiwan Affairs Office did not respond to requests for comment.

Employees from the media companies said Beijing’s efforts to sway the public’s perception of China was undermining Taiwan’s media.

“It gives China space to manipulate politics and influence public opinion in Taiwan.”

Issues that are sensitive to China are no longer covered by a large section of Taiwanese press. File image of Chinese President Xi Jinping. Photo: Andy Wong/Pool/Reuters

Several reporters and newsroom managers said that some media organisations were engaging in self-censorship as stories placed by China had become increasingly important sources of income.

Issues seen as “sensitive” by China, such as the anniversary of the Tiananmen crackdown in 1989, were no longer being covered by their news outlets, they said.

Beijing’s campaign comes at a time of growing concern over Chinese infiltration in Taiwan. In June, tens of thousands of people rallied to call for the regulation of “red media” – outlets that they claimed ran favourable coverage of a China-friendly presidential candidate ahead of key elections in January.

Two officials working at a Taiwanese state security agency, who declined to be named due to the sensitivity of the matter, said Chinese infiltration of Taiwan’s media posed “threats” to the island’s security.

“Their ultimate goal is unification,” said one of the sources, who oversees Chinese activities on the island. “They think it is better to win the heart of the people than to start a war.”

The Taiwan Affairs Office has set up companies that carry out the story placement campaign. The companies liaise with news organisations’ sales representatives, ordering up topics and lengths for stories, five people with direct knowledge of the arrangements said.

Such firms include Beijing-based Jiuzhou Culture Communication Center, as well as Publishing Exchange Center Across the Taiwan Strait in the southern Chinese city of Guangzhou, according to a contract signed by the Taiwan Affairs Office unit and the Taipei newspaper, as well as the person familiar with the arrangement.

Liu Tan, a representative from the Beijing company, ended a phone call with Reuters after a reporter identified himself. The Guangzhou company did not respond to requests for comment.

In one deal, signed in early 2017, the Beijing company paid the publication 120,300 yuan in exchange for 10 full-page, color-print stories to promote investments and tourism for an eastern Chinese province.

The two features about the business incentives in the leading Taiwan newspaper were even edited by the Taiwan Affairs Office before they were sent to the paper’s newsroom in Taipei for publication, the person said.

The person added that the people interviewed in the reports had been picked by an official from the Communist Party’s Publicity Department.

“Readers were unable to tell the stories were paid for,” the person said. “All they could see was positive coverage of the mainland.”