On February 5, the government exercised its discretionary power to introduce three crucial rules to govern the Press Council of India Act, which some of the members feel dilute the spirit of the Act.

New Delhi: New rules recently promulgated by the Union government giving unprecedented powers to the Press Council of India chairman to dictate the selection of new members has split the statutory body down the middle, with its current chairman, retired Justice C.K. Prasad and select nominated members on one side, and working journalists associations, editors, and newspaper owners on the other.

On February 5, the Centre exercised its discretionary powers to introduce three crucial rules governing the Press Council of India Act, 1978 under which the PCI – a statutory body created as a self-regulatory watchdog to uphold freedom of press and maintain and improve the standards of the press – functions.

First, the new rules, called the Press Council (Procedure for Notification of Associations of Persons) Rules, 2021, give the PCI chairman the power to unilaterally form the scrutiny committee which is constituted to induct new members once the three-year tenure of the council ends. Previously, the Act empowered the institution’s eight nominated members, and the chairman, to collectively constitute the committee. All the decisions were passed by majority resolutions in council meetings.

Second, current rules also mandate that in case there is a disagreement over the composition of the committee, the chairman’s decision can be overturned only by a “three-fourth” majority vote in the PCI. Earlier, the decision could have been overturned by a simple majority vote.

Third, the government notification has also changed the eligibility criteria for new council members. While earlier, journalists’ associations and newspapers could claim a seat in the PCI if they had a presence in at least 10 states and had been a registered body for at least 10 years, the new eligibility conditions have downgraded the requirements substantially. A claimant now needs to be a registered body for only six years, and will be eligible even if it has a presence in a single state.

The PCI has 28 members, apart from the chairman. They include eight nominated members, including three Rajya Sabha MPs, two Lok Sabha MPs, and three people with ‘specialised knowledge’. Currently, a representative from the Bar Council, University Grants Commission and Sahitya Akademi represent the members with specialised knowledge. The other 20 council members represent editors, working journalists from press associations, newspaper owners and managers, and news agencies.

Members of the PCI with whom The Wire spoke said that the new notification would “compromise the autonomous functioning of the institution irreparably”.

“The changes violate the spirit of the Act. While the PCI functions under the Information and Broadcasting ministry, it is an autonomous body. The chairman is accountable to the Council and not the government. The new rules will allow the government to dictate its terms to the PCI with the help of the chairman,” said one member who did not want to be named.

A former member of the PCI, senior photojournalist S.N.Sinha told The Wire that the new rules are essentially “undemocratic” and seek to leave all decisions of the PCI to the “whims and fancies” of the chairman.

“The rules have come on the heels of the government’s multiple attempts to control the press. The GoM report on government communication and the new IT rules indicate that the government is uncomfortable with a free press. With such far-reaching changes in the PCI rules, the chairman can be easily controlled by the government to dilute PCI’s autonomy,” he said.

The government’s move has already begun to show its impact amidst a fierce debate within the PCI in which Council members and the chairman are locked in a battle-like situation.

In accordance with the previous rules, the Council had already finalised a scrutiny committee of five members and the draft of the advertisement that invited applications for membership before the new rules were notified. The decisions were taken with the consent of the chairman retired Justice C.K.Prasad.

However, soon after the changes were notified by the government, Justice Prasad issued a new advertisement containing the new criteria on March 7, 2021 without holding any consultations with the Council. This triggered a debate in the Council, with most members opposing the unilateral move by the chairman.

The Council met thrice this year (January 22, February 16, and March 15). In the January meeting, the reconstitution of the 14th term was discussed in accordance with the previous rules. As a result, the draft of the advertisement to invite applications was finalised and it was decided that a scrutiny committee would be formed by the Council.

In the February meeting, 10 days after the new government notification, the Council decided by a majority “not to give effect” to the new rules, and to express its objections to the I&B ministry in writing. In that meeting, the Council also decided that “the implementation of the revised procedure notified under the 2021 rules be deferred and the same be conveyed” to the ministry.

“Further action will be taken by the Council after the receipt of their (ministry officials’) advice,” minutes of the meeting, a copy of which is with The Wire, noted. All the members were signatories of the document. 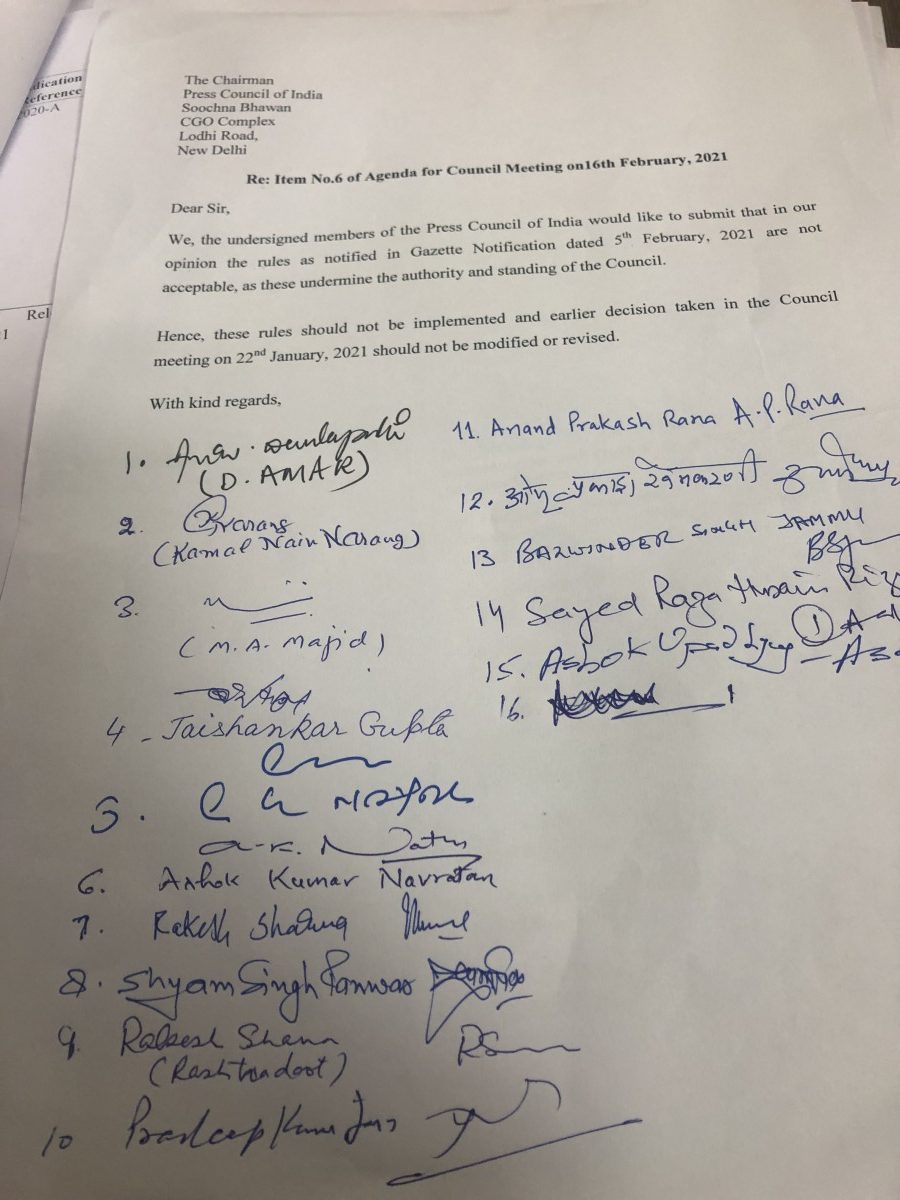 The chairman’s unilateral move to supersede the Council’s decision kicked off a debate in the PCI.

“The three-year tenure of the 13th term is supposed to end on May 29, 2021. Thus, the Council met and finalised the draft advertisement for applications and decided to form a scrutiny committee to reconstitute the 14th term which would come into effect from May 30, 2021. However, the chairman nullified all the proceedings after the new rules were notified, and went ahead unilaterally to publish the new advertisement without even discussing it with us,” said a council member who requested to remain anonymous.

“This is just an initial glimpse of how the Council’s autonomy could be compromised in the future,” he said.

“The new rules”, he added “would not only dilute the PCI’s independence but also affect the ‘all-India character” of the statutory body.” The PCI is currently represented only by those associations which have a visible presence in at least 10 states of the country.

“With the new rules in place, any association with hardly any presence among working journalists has become eligible for membership,” the member said.

“The chairman, who is accountable to the Council as per the Act, violated the spirit of the Act by acting undemocratically. The new rules notified by the government too violate the Act in many ways. The Act clearly says that every decision in the PCI should have the consent of the majority. The chairman is supposed to be first among equals, not a superior authority overseeing the PCI. The PCI is a press body, one must be clear about that fact,” Sinha said.

Moreover, Sinha said that the chairman’s decision has led to an unprecedented situation. “Although the new rules empower the chairman to constitute a scrutiny committee, he will not be able to do that.”

He said that the committee comprises five nominated members of the Council but the tenures of all the nominated eight members have already ended technically. “I don’t know how he will constitute a scrutiny committee. This leaves only the chairman to scrutinise the claimants and select new members. This has never happened before.” said Sinha.

Members with whom The Wire spoke expressed surprise over the hurry with which the chairman redrafted the advertisement and published it.

“We were alarmed by the way the chairman moved to supersede the Council’s decisions and publish the new advertisement. The Council had begun proceedings for the 14th term in 2018. The draft of the advertisement was already decided. It was also decided to form the scrutiny committee back in 2018. But he sat on the decisions and did not act upon it for two years until January 2021 when the Council meeting happened,” a member said.

“But look at the haste with which he acted upon the new regulations prescribed by the government, even as the Council has opposed the rules in all its meetings,” he added.

A cartel controlling the PCI: chairman

Responding to the allegations against him, Justice Prasad said that the new rules will make the PCI more representative, and that the seven press associations which are members of the PCI were functioning as a “cartel” that doesn’t want new members.

“Yes, I agree that the whole Council is against me. But I have made my reservations against its views very clear.  If I had to choose between disrespecting the law and disrespecting the view of the members, I will most certainly choose the latter,” Prasad told The Wire.

“Certain decisions were taken by the Council earlier but once the rules were notified, I had to abide by it.  Now the Council wants it to be ignored. I am not prepared to do that. So long the law is there, I will go by it,” he said.

He added that the seven press associations have held the PCI to ransom over the years. “Those seven associations do not want any other association to come. Therefore, they want the evaluation criteria to be tailor-made to their advantage. I want to expand the scope of the Council,” he added.

“Why shouldn’t newspapers from Kerala, Tamil Nadu, West Bengal not join PCI? There is currently no member from Mumbai which is the hub of financial journalism. Why shouldn’t it join? The rules would actually give the PCI an ‘all-India character’ as it would open up space for members other than these seven organisations to come,” Prasad said.

Prasad said that most of the members of the Council are “undeserving” but hold sway in the body because nominated members remain too busy to attend Council meetings. “I have made my dissent very clear about such proceedings in writing. Many of those associations wanted a domestic servant of one editor to become a member of the PCI. Had I not objected to the appointment, a domestic servant would have become a PCI member,” he said.

When asked about why he didn’t consult the Council before reversing the decisions made in the Council meetings earlier this year, he said, “I was not happy with the decisions. I knew that the questions for the new claimants were tailor-made to secure the membership of the seven associations. But I let it go as it was permissible under the law until then. Once the new rules were notified, I went by the law to publish the new advertisement.”

“Then the associations ask what was the hurry to publish the advertisement. I have already told them that the retiring chairman is obliged to initiate the process of constituting a new term. Had I not done that on time, the same organisations would have accused me of delaying the proceedings. The Act says that a chairman can continue for another six months following his retirement. They would have said that I delayed matters to continue as the chairman. That is the irony of such accusations,” Justice Prasad said.

As the controversy over new rules prescribed by the union government has triggered a fight in the Council, the Indian Newspaper Society, one of the member associations, has challenged the new rules in the Delhi High Court. Other members have also written to the government to reconsider its decision and withdraw the new rules.