Ravi Shankar Prasad and another BJP leader withdrew at the last minute, when they learned of a BBC report implicating "right-wing networks" in spreading fake news.

New Delhi: Union minister Ravi Shankar Prasad was expected to give the keynote at the BBC’s ‘Beyond Fake News’ conference on November 12. At the last minute, however, the speech was cancelled. The Minister for Information Technology did not turn up for the event.

Many believed that Prasad backed out in order to be present at the funeral of his cabinet colleague, Ananth Kumar, in Bengaluru.

However, The Wire has learned that Prasad’s decision was sealed by the BBC’s new research, published the same day, that the “rising tide of nationalism in India is driving ordinary citizens to spread fake news” and that “right-wing networks are much more organised than on the left, pushing nationalistic fake stories further.”

The BBC released its findings on the day of the capstone event in New Delhi.

A source at the BBC told The Wire that Ravi Shankar Prasad and his team weren’t happy with the findings and decided to not attend the event for that reason. Another BJP representative, meant to participate in a panel discussion with Aam Aadmi Party’s Ankit Lal and Congress’s Divya Spandana, also backed out at the last minute.

The Wire has sent questionnaires to BBC and Prasad’s team. This story will be updated with their response.

Proud to be followed by PM

Aiming to understand India’s crisis of digital misinformation, the BBC organised a series of events across the country. It invited experts from politics, academia and civil society to discuss the problem, potential solutions and future collaborations.

Eighty participants – in India, as well as Kenya and Nigeria – gave BBC access to their mobile phones for a seven-day period, allowing researchers to analyse their media consumption as well as how they shared information on WhatsApp and Facebook.

To determine if the spread of fake news was politically polarised, the BBC also analysed about 16,000 Twitter accounts and 3,000 Facebook pages. It found, for example, that “many more of the Twitter handles that have published fake news sit in the pro-BJP cluster than in the anti-BJP cluster”. Left-wing fake news networks were loosely organised, if at all, and less effective.

Several BJP leaders and members of Modi’s cabinet have in the past propagated fake news and also deliberately promoted websites that spread misinformation aimed at maligning minorities.

Critics of the research have targeted its methodology and sample-size, saying eighty participants across three countries is no basis for such sweeping claims.

Nupur Sharma, editor of the pro-government website OpIndia, also declined to participate, leaving the right-wing largely unrepresented at the Delhi event. However, the deputy chief ministers of Gujarat and Uttar Pradesh attended the BBC events hosted in Ahmedabad and Lucknow respectively.

In the last year, at least 30 Indians reportedly have lost their lives because of rumours circulated on WhatsApp. While the Modi government has place the onus on Facebook (which owns WhatsApp) to curb the spread of fake messages, no concrete steps have been taken so far.

This isn’t the first time a BJP leader has bailed out on a media event following unfavourable coverage. The prime minister, who was to be the chief guest at the Economic Times’s Global Business Summit in March 2017, pulled out at the last minute – punishing the media group and the event sponsors.

NewsLaundry quoted sources who cited multiple reasons for the the prime minister’s decision to stay away: from the paper’s coverage of the UP polls, to Vineet Jain’s critical “demonetization tweets”, to TOI’s editorial cartoons taking potshots at the government, to Modi spoofs on Radio Mirchi. 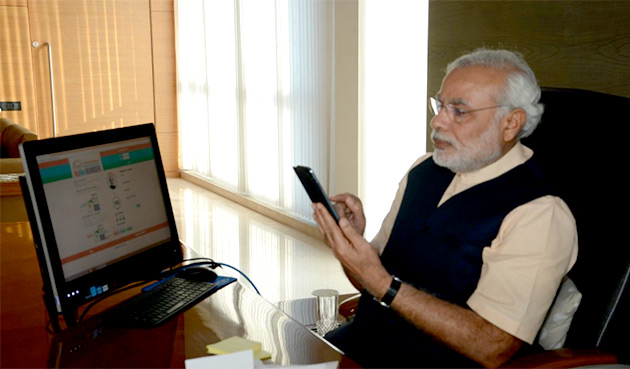 The controversy flared up when former ET journalist Rohini Singh, who covered the UP elections extensively, deleted her Twitter account (she is now a contributor to The Wire) and Radio Mirchi discontinued its show ‘Mitron’.

Modi’s move left many surprised. The Times Group’s news channel, Times Now, had been noisily in favour of demonetisation.

Yet the government’s control over news coverage is evident from how often media organisations censor themselves to keep the ruling party happy.

In July 2017, a story published by the TOI’s Ahmedabad edition about an apparent increase of “300%” in BJP president Amit Shah’s assets over the past five years was removed from the newspaper’s website within hours of being published. No explanation was ever given by the newspaper for pulling the news item.

In a sign the Shah-Irani story was deleted in response to external ‘stimulus’ and not internal review, similar stories published by DNA’s print edition and Outlook Hindi were also deleted from the respective websites.

At the time, The Wire also reported that TOI deleted tweets and Facebook posts alerting readers to another story involving Smriti Irani: ‘PIL accuses Smriti Irani of fraud in MPLAD funds’. Irani is believed to have objected to the story, which appeared on July 27, 2017.

In September 2017, the Times of India’s Jaipur edition published an article critical of the Centre’s Pradhan Mantri Fasal Bima Yojana. It was taken down from the newspaper’s website within hours.

Ironically, in May 2017, the websites of TOI and Economic Times pulled down a report on India’s low ranking on the World Press Freedom index.