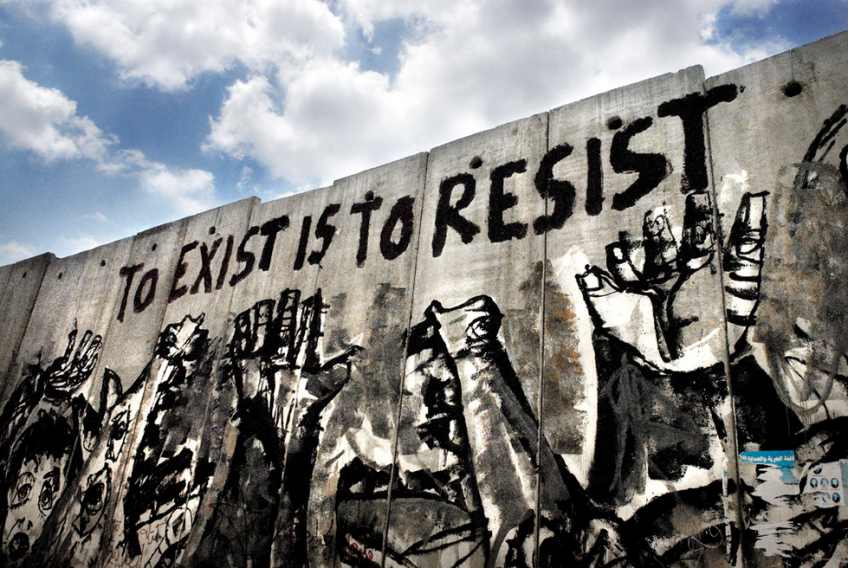 To exist is to resist. Credit: freedombuspalestine.blogspot.com

The filing by the CBI of a criminal case against the Lawyers Collective, a prominent legal resource organisation with a national and international reputation, has a significance that goes beyond the hounding of two prominent legal personalities, Indira Jaising and Anand Grover (‘After CBI Files FIR, Lawyers Collective Calls It an Attack on Free Speech’, June 18). It may well be a foretaste of what the new government has in store for those who stand up against state repression, or seek to expose malfeasance within the political, corporate and personal spaces.

The message could not have been clearer: the crackdowns that we witnessed in the first tenure of the Modi government – from the cancellation of registrations of hundreds of thousands of civil rights organisations to the incarceration under a draconian law of those supposedly linked to the Bhima Koregaon violence through elaborate police chargesheets – could manifest themselves with redoubled force during the second.

Significantly, this attempt to silence Jaising and Grover comes at a time when the independence of the judiciary is under tremendous strain from an executive seeking to bend the bench to its will (‘Centre’s Refusal to Elevate Justice Kureshi Raises Troubling Questions’, June 21). We have already seen a whistle blower police officer, critical of Narendra Modi, getting life imprisonment in Gujarat (‘Sanjiv Bhatt Case: In 16 Years, Gujarat Saw 180 Custodial Deaths – and Zero Convictions‘, June 21). The Gujarat dimension is conspicuous in all these instances, but there have been others like a rapper being hauled up for ‘sedition’ for her social media posts (‘Rapper Hard Kaur Charged With Sedition for Posts Against Adityanath, Bhagwat’, June 20) and journalists being thrown into Adityanath’s jails like hardened criminals (‘Editorial: The Yogi as Commissar‘, June 11).

Taken together, these recent occurrences may seem disparate in nature but point in the direction of an increasingly repressive state. This move to crush Lawyers Collective, when taken together with the arrest of the human rights defenders implicated in the Bhima Koregoan case, seems powered by a drive to wipe out human rights activism in the country.

Just a cursory look at the numerous petitions expressing outrage over the CBI move indicates the broad swathe of human rights Lawyers Collective has been involved in. Jaising and Grover have contributed significantly to changing the architecture of law and justice delivery in this country.

A petition from People’s Union of Civil Liberties, unequivocally condemned the move as a “brazen abuse of the process of law”, and noted that the organisation had “taken up important cases throughout the 38 years of their existence. In a separate statement, women activists recalled how “Indira Jaising, since the 1980s, has unwaveringly stood by the Constitution’s Fundamental Rights”, whether involving herself in the changes made to rape laws in 1983, securing inheritance rights for women as in the Mary Roy case, securing guardianship for single women in the Githa Hariharan case, battling sexual harassment in the Rupan Deol Bajaj case and campaigning for the formulation and enactment of the Domestic Violence Act.

It also applauded the battle Anand Grover has waged for over for two decades on behalf of the LGBTQI+ community in 2001 when a Public Interest Litigation was filed against Section 377 (IPC) and the way he “represented the Cancer Patients Aid Association and individuals against the patenting and pricing of drugs”, playing a key role in the formulation of The Human Immunodeficiency Virus and Acquired Immune Deficiency Syndrome (Prevention and Control) Act, 2017.

LGBTQI+ citizens, groups, collectives, and organisations iterated that the Lawyers Collective has been central to “the very story of the movement against Section 377 of the IPC”; while the Bebaak Collective, representing a large section of Muslim women, underlined the fact that the “two most significant legal cases in recent times” involved the Lawyers Collective articulating the intrinsic rights of Muslim women in the triple talaq and female genital mutilation cases.

These petitions – and there were many others emerging from bodies of international human rights activists to national and international intellectuals – indicate that there is rising alarm over the way political elites in India are seeking to consolidate themselves through the capture and control of the institutions of power. But these petitions also indicate that information, such as the life’s work of Jaising and Grover, is not known beyond small professional and activist groups. Consequently, the dynamic to defend such work also remains confined to these circles.

This must change. The Jaising-Grover legacy needs to be taken to a new generation of Indians who may be unfamiliar with cases fought aeons ago, but needs to realise that their everyday rights have got strengthened because of stalwarts such as them. It is precisely in times of shrinking spaces that the attempt to build popular awareness on human rights and their defenders should take place.

The media has a major role in achieving this and that is why pieces such as ‘Documenting Anand Grover, Indira Jaising’s Fight for Human Rights Over the Years’ (June 20), are valuable. The point to remind ourselves as journalists is this: in many profound ways, the work of both journalists and lawyers, while having separate pathways, are both concerned with the investigation; argumentation on, and exposure of, wrong doing; and the delivery of justice. This makes it incumbent upon the media to closely follow the Lawyers Collective issue in the days and months ahead, because of the tremendous consequence it holds for justice delivery and human rights in India.

Recently we have seen a wave of human bodies in media spaces, defining two different approaches to health. One, was about “wellness” through yoga, with hundreds of thousands of people across the country performing amazing asanas on mats arranged in geometric precision; the other, highlighting crucial public healthcare, were the crumbled bodies of babies, dead or dying, in Bihar’s hospital wards from a condition identified as Acute Encephalitis Syndrome (AES).

Before I get trolled for being “anti-national”, let me state right away that I am a yoga enthusiast too, with my own mat as proof. Yet “wellness” can never been a substitute for “good health”, just as the Pradhan Mantri Jan Arogya Abhiyaan, also known as Ayushman Bharat, can never be a substitute for a viable, vital primary health system. If the deaths of over 170 children in Bihar tell us one thing, it is that there are no shortcuts to ensuring well-nurtured infants and efficient health delivery at the village level.

So how did this story unfold? By June 8, stray reports of infant deaths in Bihar had begun to surface – but the numbers were as yet still “modest” – just a dozen or so – not worthy, it seems, of more than rudimentary coverage. By June 12, the number of deaths had doubled and now hovered at around 31. Still within “normal” range, or that at least seemed to be the media assessment.

Meanwhile attention was getting fixated on another health crisis in the adjoining state of Bengal (‘A Doctor’s Strike Was Inevitable in West Bengal’s Broken Health System’, June 17). There was violence, tragedy and politics all wrapped together in the story there. The brutal beating up of a junior doctor in the Nil Ratan Sircar Medical College, leading to the suspension of the entire medical service, segued seamlessly into the larger political narrative of chief minister Mamata Banerjee and her violence-marked battle of survival against the BJP.

All this while, the lives of little children kept slipping away like grains of sand in an hourglass in Bihar. It needed some knuckle duster politics to breathe life into the story and that came with the “let’s bait Nitish Kumar” impulse. Now Bihar chief minister Nitish Kumar deserved to be baited over the delay in response, make no mistake, but the enthusiasm with which television stars now took up the story was at least partially related to the new chill that has set in between the BJP and the JD(U).

Suddenly, television stars began to be parachuted in. The performance of an Aaj Tak anchor, gate crashing a crowded hospital ward with one well-manicured hand holding her microphone, the other on her hip, was much noted. She had come, she said, to find out “whether there was any value attached to a child’s life left in this country” and had convinced herself that if her microphone was not on, nobody would even turn and look at these unfortunate children. It is easy to critique her, but in a sense she symbolised in one frame the arrogance, impetuousness and competition-driven urgency of the media.

Like effective healthcare, there are no shortcuts to efficacious journalism. An understanding of local conditions made The Wire piece, which was translated from the Hindi, exceptional (‘Bihar: Who is Responsible for the Death of 100 Children?’, June 17). But the question it raises has no easy answers. 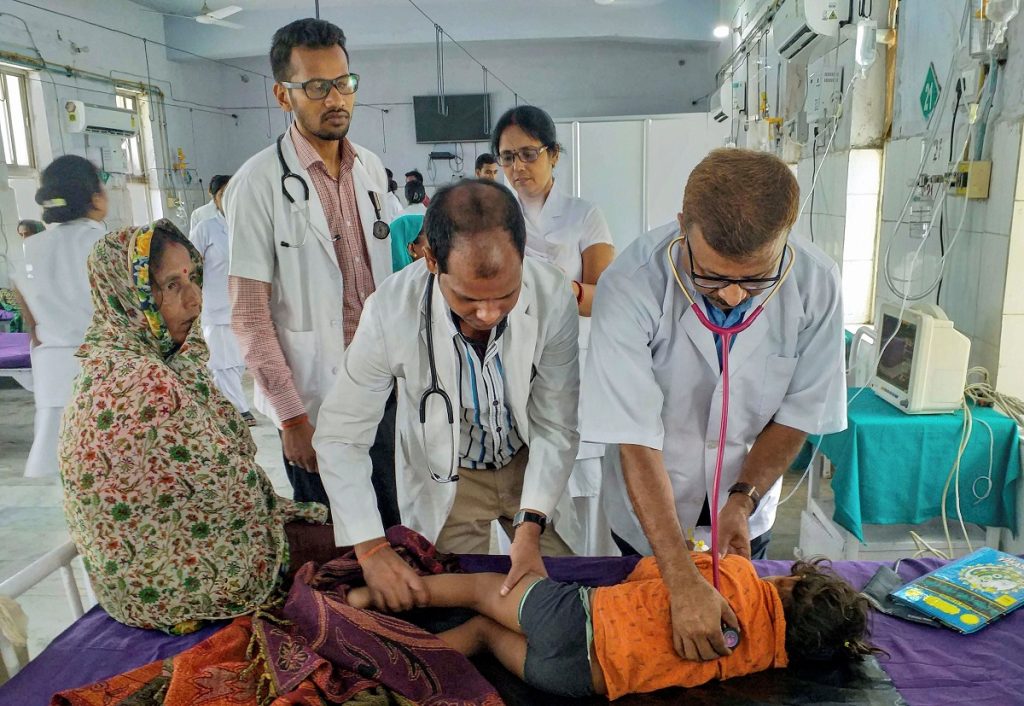 Muzaffarpur: A doctor treats a child showing symptoms of Acute Encephalitis Syndrome (AES) at a hospital in Muzaffarpur. Photo: PTI

Among the letters in the bag this fortnight was one from a reader who was dissatisfied with the performance of our parliamentarians. It ends by asking an important question…“Clearly, the government cabinet of 2019 is hardly inspiring — they are an old bunch, all millionaires but coarse and bereft of intellect and humour. They cannot engage with the common people, so who will?

A group of students and individuals associated with IIT Guwahati and IIT Mandi have been flagging instances of corruption in both institutions, but to little effect. There has even been an effort to file a PIL in the Gauhati high court about an illegal construction of a temple inside the premises of IIT Guwahati. This is just one of many cases of corruption and illegalities flourishing in these campuses. They want these instances to be highlighted in the media and appeal to The Wire and other platforms to investigate them.

A recent subscriber, Amrit Mehta, who is also a photographer, wants The Wire to do far better in terms of the images it carries because “personally, I find it exciting to read an article with razor sharp, well framed photos … it also would enhance your overall impact.” He goes on to say “The ISRO Photo really got me…. Compared to the SpaceX Falcon Heavy photos.

This news portal, incidentally, gets its full share of trolling. One writer recently accused it of “agenda-driven” reporting. The mail went on to say, “You promote yourself as standing up against injustice, but you are just hiding behind this electronic wall to spew out junk.” To those like this writer, one can only say that if they have any specific charge about a wrong fact or blatant falsehood, The Wire will be happy to take corrective action. Vituperation and rants don’t cut.