The BJP minister reportedly unleashed choice expletives at The Telegraph's editor when he refused to apologise. New Delhi: The Telegraph has run a report on its front page essaying a chain of events in which Union minister Babul Supriyo – currently at the centre of controversy over his role in spurring unrest at Kolkata’s Jadavpur University – reportedly rang the paper’s editor and in the course of demanding an apology for a headline and caption, used choice expletives.

“Around 7.50pm, the minister called Telegraph editor R. Rajagopal on his mobile phone during the evening news meeting. Supriyo introduced himself and said he would like an “amicable apology”,” the report on the paper reads. The report says that upon the editor’s insistence that the paper had nothing to apologise for, the BJP leader grew incensed and said the paper had “f***ing sold out.”

Since the events at JU on Thursday, in which Supriyo was allegedly heckled by students, photos and accounts have emerged which show that Supriyo himself could have indulged in a degree of violence against the students. While there have been reports on him issuing explicit threats to sloganeering students, along with widely circulated videos where he can be heard haranguing university vice-chancellor Suranjan Das, The Wire has not been able to verify those independently.

Telegraph, on Friday, ran a photo in which Supriyo is seen pulling at the shirt of a young man on campus. The headline the paper chose was “Babull at JU”. The caption mentions that the Supriyo was “grabbing a student by the shirt”. 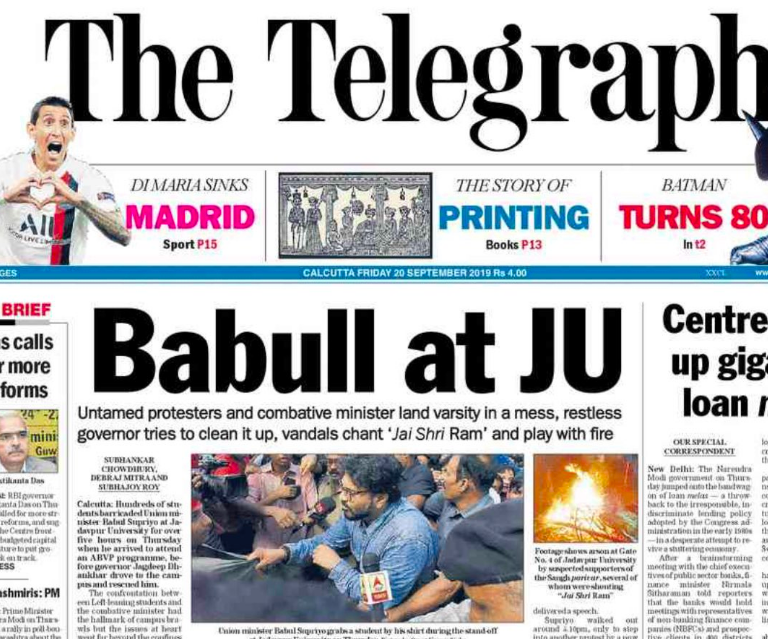 The Telegraph’s front page on Friday.

This was what Supriyo evidently took exception to. All of Saturday, the MoS for the Ministry of Environment, Forest and Climate Change tweeted fervently against what he labelled as misrepresentation of the role he played at JU.

He wrote that if the newspaper, “doesn’t apologise tomorrow for their false biased reporting, I’ll sue them.” He first tagged the UK Telegraph in his tweet and rectified it with a subsequent tweet.

This is the video which shows:
1. I WASN’T elbowing anyone rather I ws being pushed & manhandled with my shirt torn
2. It wasn’t a girl either-it was BEARDED GUY as clearly seen in the VDO
If @Telegraph doesn’t apologise tomorrow for their false biased reporting, I’ll sue them pic.twitter.com/scFd7iHjWa

Supriyo carried the demand for an apology forward by making a call to editor Rajagopal, reports Telegraph. At first, Supriyo reportedly complained that he had not elbowed anyone. His tweet (above) also uses the term ‘elbowing’. When Rajagopal sought to clarify that the newspaper had made no such claim, Supriyo allegedly shifted focus on the pun on his name in the headline, stressed that he was a “Central minister,” asked the editor if he was a gentleman before unleashing the expletives.

According to the paper, Rajagopal told him that no apology would be forthcoming and that Supriyo should send the paper a legal notice or letter should he demand legal action be taken.

Supriyo allegedly also told Rajagopal that he was recording the conversation. The call was reportedly cut by Rajagopal.

Supriyo’s slew of tweets, since the conversation ended, corroborate many of the claims made by the paper on the salient points of the conversation. The minister has, however, said the editor abused him in “filthy lingo”.

He also shifted focus of his grouse from the use of the term “elbowed” to “grabbing the shirt”.

MrRajagopal, the arrogant editor of @ttindia jst abused me in filthy lingo on the Telephone when I called him asking him 2 print an amicable small apology for falsely publishing a first page report accusing me of grabbing the shirt of a JU student when it’s the other way round? pic.twitter.com/iC2cEH6MlJ

He threatened me to hand write an article against me tmrw about me calling him !!! His arrogance was amusing !! Two other journalists are privy to what my intention was when I tried getting the number of that arrogant editor – calm&amicable•My tweet abt that article ystrdy is?

This tweet of mine yesterday was in response to a journalist asking me as to why @ttindia spelt my name as BabuLL with an extra L .. it wasn’t an inadvertent mistake but purposely done with an agenda to malign•The joker of the editor asks “why I am ASSUMING that BaBuLL meant me? https://t.co/c67rCYapdb pic.twitter.com/JKitTg8xcw

The arrogant editor of ⁦@ttindia⁩ asks me to explain what makes me ASSUME that they meant me when they print BabulL over my pix!! Hw obnoxious can one get•It is surely a paper that is SOLD to #TMchhi & Mamta’s ADs to them•Shame on them& he threats me with an article tmrw pic.twitter.com/kFAKSO7HBX

The singer turned politician has also retweeted several comments on the need for regulation of media.