Suvarna and Kannada Prabha, among the biggest media platforms in the Kannada language, say they grew suspicious and filed a police complaint in October 2017. #Updated on May 30, 2018 with the response of Kannada Prabha and Suvarna News

New Delhi: The second part of Cobrapost’s investigation, ‘Operation 136’, released on YouTube on Friday, highlights the manner in which the line between advertising, advertorials (euphemistically called ‘brand promotion’) and paid news has been blurred with the management side of many national and regional media organisations promising clients with deep pockets assurances of favourable news coverage too.

At some media houses, Cobrapost’s undercover reporter – who posed as a representative of an unnamed ‘sangathan’, or organisation, and sought to buy time and space to promote what he said was a Hindutva agenda – encountered executives who openly boasted about their political preferences, affiliations and influence.

In surreptitiously recorded video conversations with the influential Bengaluru-based news channel Suvarna and its sister publication Kannada Prabha, a senior management representative boasts of their owner, Rajeev Chandrasekhar’s affiliations to the ruling party, describing him as “a Hindutva guy”.

Chandrasekhar is a BJP MP in the Rajya Sabha.

Cobrapost’s reporter introduced himself as ‘Acharya Atal’ and said he was promoting the ‘Hindutva’ agenda with the blessing of “Nagpur” through an organisation named Srimad Bhagvad Gita Prachar Samiti.

Two top office bearers of the channel and the newspaper told ‘Acharya Atal’ that they were “already” working as per the party line.  Pradeep Gowda C.S., senior manager, ad sales, Suvarna, told “Our chairman is also a Hindutva guy…we are owned by Asianet, Suvarna News…he is a big follower of (Prime Minister Narendra) Modi.”

The company’s vice president of ad sales, S. Anil told the reporter that not just him but the editor of Kannada Prabha, Ravi Hegde, is also a supporter of the BJP. Asked about editorial support for the proposed campaign, Anil says, “I will get that done… That is not an issue”.

In an indication of what can happen to the line between editorial and advertising when a media organisation is owned by a politician or is run purely for profit, Nagraj Karkera, senior officer, ad sales of Kannada Prabha, told ‘Acharya Atal’, “If you give news instead of advertisements it is better.”

Though the undercover reporter wanted to pay for advertisements promoting his ‘Hindutva’ agenda, Karkera suggested that he should rather get news published in the paper favouring his ideology, obviously hinting that such propaganda published as news items would have more weight in the eye of readers than merely advertisements.

Interestingly, Karkera agreed to publish news only to run down the Congress but not the Janata Dal (Secular). These conversations took place a few months before the recent assembly elections in the state. Though the Janata Dal (S) finally went with Congress to lead an alliance government in Karnataka, till late, there was a speculation that it might align with the BJP post polls.

Two officials of a radio station run by the same company also appeared to readily agree to run down the BJP’s political rivals in the state in a veiled manner, as per the wishes of Acharya Atal’s agenda and thereby create a favourable image of the party in the run-up to the elections.

“I will give you the background about this company. This company is owned by a gentleman called Rajeev Chandrasekhar. We are pro-BJP but obviously being a media house we cannot… there are certain restrictions… so obviously there is ideology that you know even though he was a very independent candidate when he started off, now he is aligning with the BJP and he is president of the Kerala BJP….”, an executive said, seeking to assure the prospective client that his ‘agenda’ would therefore be fulfilled. 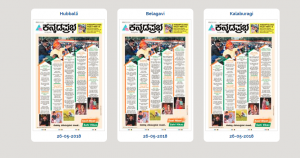 A day after the clandestine video recordings were put out in the public domain,  all editions of Kannada Prabha – like many of the national newspapers that featured in Cobrapost’s exposé – splashed full page jacket advertisements issued by the Modi government to highlight the ‘achievements’ of its four years in power.

In a response mailed to The Wire, a representative of Suvarna and Kannada Prabha denied all of Cobrapost’s charges and said its executives and journalists had become wary of the undercover reporter after initial meetings and had even filed a police complaint about him in Bangalore last October. Kannada Prabha also published a story about  “how a Swamiji from Uttar Pradesh was trying to promote Hindutva in Karnataka by offering advertisements to TV channels.”

Note: A response to Cobrapost’s video recordings has been sought from Kannada Prabha and Suvarna and this story will be updated when it is received.

This is with response to Cobra Post’s recent sting videos and its false allegations that the group of media – Suvarna News TV channel, newspaper Kannada Prabha and radio station Indigo 91.9 FM accepted monetary offers to promote a religious ideology.

At the outset, we would like to place on record our complete denial of Cobra Post’s false allegation that we accepted offers of money to promote a religious ideology. The allegations are baseless and incorrect. Instead we had instantly informed the police authorities of the ill intention of the person who approached us and brought it to the notice of the public by publishing a news in our newspaper. As a reputed media group, we have ensured that we maintain editorial integrity throughout our various television, print, radio and digital mediums. The group has a 20+ year legacy (Kannada Prabha, is a 50-year respectable brand) of broadcasting news which is unbiased and independent.

Cobra Post’s sting operation video claims that their intention was to expose media channels which promote the ideology of Hindutva for politics. In Cobra Post’s meetings with some of our management team members, we had made it clear to their reporter that we will not be able to air advertisements or content which doesn’t meet the standard editorial guidelines. The video which has been aired is maliciously altered by Cobra Post to show the contrary by picking lines from different parts of the conversation and making the viewer believe their lies. We condemn this attempt by them to tarnish our group’s brand image.

We would also like to bring to light the chronological order of events which occurred during this sting operation.

The reporter mentioned in this case came to us with a proposal to air the spiritual and religious messages by a reputed acharya of Valmiki Ashram, Uttar Pradesh. He said the messages will be from the holy book of Bhagavad Geeta which would be non-controversial and not hurting the religious sentiments of viewers. In his own words, “Not crossing the Laxmana Rekha”. This portion of the conversation has been conveniently deleted from the video clip to support Cobra Post’s ill purposed intentions. We do broadcast pure religious programs and we have no issues taking such campaigns if any. However, after a few minutes of talking, Cobra Post’s reporter started emphasising on promoting hidden Hindutva and political messages. We don’t accept such campaigns. Neither are we telecasting such hidden agenda content nor have we agreed to telecast such malicious content. Cobra Post’s allegation that we accepted to telecast hidden political messages through their advertisements is a complete wrong assumption and a false allegation.

The reporter from Cobra Post asked us to telecast news against the government and a political party JDS. Irrespective of political parties, we have been telecasting news for and against the government and opposition parties be it Congress, BJP or JDS as and when there is merit to do so. We don’t do it at the instance of commercially interested parties. We have always stood by our slogan which stands for “straight, bold and relentless” in reporting of news.

Firstly, suspecting the reporter’s intentions, (at that point of time we were not aware of cobra post sting operation) the editor launched an instant sting operation on him. A copy of the email of the editor to our investigation team assigning this task is attached here with is self-explanatory.

We immediately filed a police complaint against the suspected person (Acharya Atal, since we were not aware of the person’s name at that instance). A copy of our complaint and acknowledgement from the police is made available along with this statement. We would not have done this if we had any intent of promoting any such biased content or a religion. Following up on our police complaint, we had also offered the police our help to arrest this person Acharya Atal through our own sting operation. However, multiple attempts to track this reporter by us and the police failed as he had escaped from Bangalore. As a responsible media house, we were more than alert to report this malicious proposal.

Secondly, we didn’t stop at this, in fact we have also carried a news article in our newspaper Kannada Prabha dated 13th Oct 2017 in which we had stated how a Swamiji from Uttar Pradesh was trying to promote Hindutva in Karnataka by offering advertisements to TV channels. (At that point of time we were not aware that this was a sting operation by Cobrapost) A copy of this is also made available along with this statement. Why would a media house allegedly agreeing to promote this kind of content for money, as shown by Cobra Post’s ill-intended video, be using its own credible print medium and do a news article reporting this matter much ahead of making these videos public? 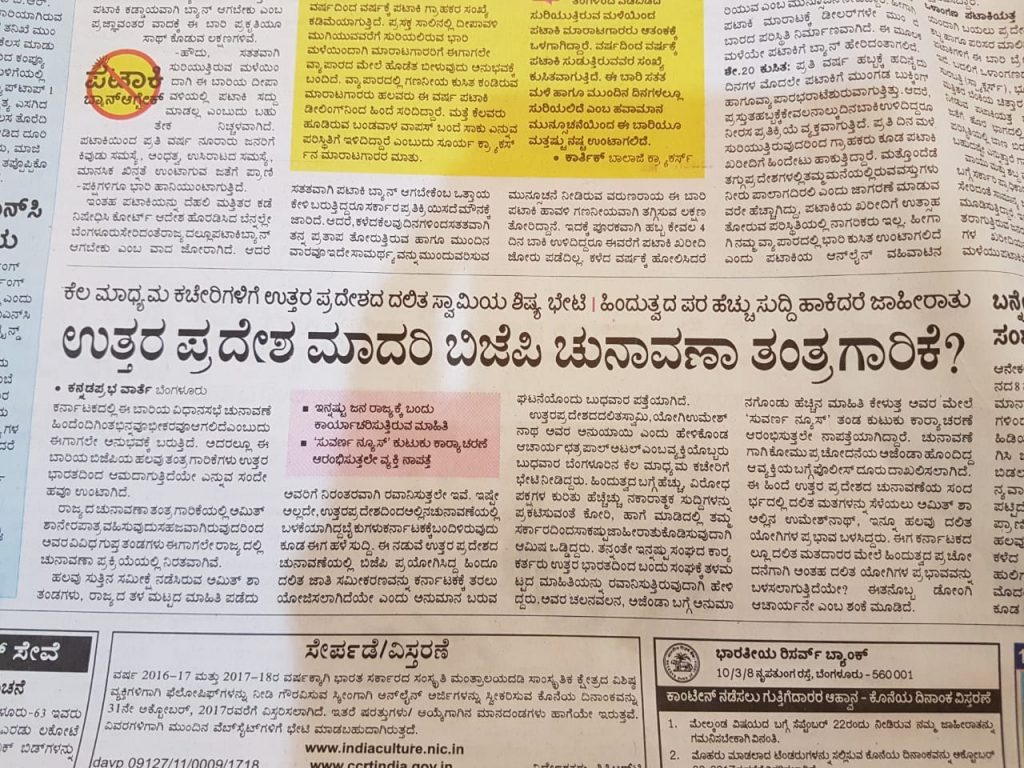 Lastly, we had already approached the honourable court of the City Civil and Sessions Judge on 24th May 2018 regarding this matter and had obtained an injunction order against any such damaging story to be aired or spread against our media group. Despite informing this to Cobra Post’s team, they have gone ahead and posted this content on the internet which has placed them in contempt of the court order. The mail copy of the order was shared by our advocates, Legal Services Inc. on 25thMay 2018 at 8:30 PM on the mail id –  newsdesk@cobrapost.com belonging to Cobra Post. The physical copy of the order duly notarized is being sent to Cobra Post at their office address in and around Delhi.

We call upon Cobra Post to immediately remove this content on their website and across all other social media networks. We will be immediately pursuing legal action against them for their attempt to damage the reputation of our media group.

The media group is committed to upholding its promise of delivering the highest standards of journalism and ethical practices across platforms.