Assam: Journalist Tied to a Pole, Beaten For Reporting on Illegal Gambling

Milan Mahanta, who works with a local newspaper, has allegedly angered local goons who have stakes in illegal gambling. 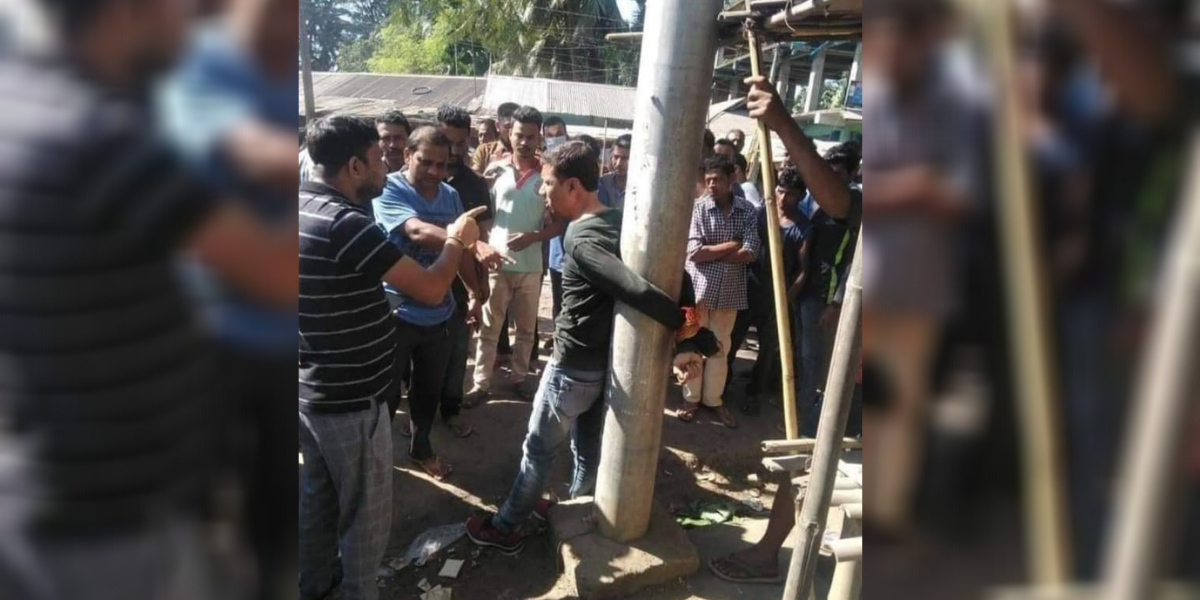 The assault on journalist Milan Mahanta in Assam's Mirza town. Photo: By arrangement.

Guwahati: The image of a local journalist being tied to an electric pole while a group of men assault him in a broad daylight has gone viral in Assam. Milan Mahanta, a correspondent for the Assamese daily Pratidin, had stopped at a paan shop on Sunday afternoon at Mirza, a town located in Kamrup district, when the assault took place.

Mirza is around 35 kilometres from state capital, Guwahati. Incidentally, the attack took place on the day the nation marked National Press Day. The incident has sparked uproar on social media, with many expressing concern for journalists working in Assam under the present political dispensation.

Mahanta was on his way to attend a meeting when a group of seven men surrounded him and dragged him from the paan shop before tying him to an electric pole with cables at Mirza Teeniali, a well-known spot located in the centre of Mirza town.

For the past week, Mahanta has been reporting on illegal gambling activities, which have been mushrooming with the onset of Diwali festivities. He angered an alleged local ruffian who, as accused by locals in Mirza, has also indulged in land grabbing activities.

Mahanta has since filed an FIR at the Palash Bari police station. A case has been registered against the perpetrators. Local Mirza residents have protested, condemning the incident, and have also questioned as to why the police have not been able to nab the culprits.

The Wire reached out to Mahanta on Monday. The reporter could barely speak due to injuries sustained on his head, neck, and ears. He also said that he could not hear properly as many of the blows had landed on his ears.

“I had stopped by the paan shop. Seconds later, the goons roughed me up, and while beating me, they tied me to an electrical pole. They had plans to abduct and kill me. There was a vehicle parked nearby to put me inside. They brought cables and cloth. While I was being beaten, they warned me that no one would come and help me, not even the police.

They were boasting that they are not scared of police and do not care about journalists. They were brazening and outwardly stated that they had been observing me and what I have been reporting. The fact that it happened in broad daylight has shaken me and the police is yet to catch them despite their faces being clear on the viral photos. If it were not for locals, they would have managed to slip me away. I would have been dead,” he said.

He continued, “I have struggled my entire life. I have been reporting for the past 14 years. What is my crime? That I was reporting against illegal activities and the nexus between those involved in land grabbing and illegal gambling? I am sick now and my body hurts. My friend and neighbours are giving me protection. Even after 24 hours, they are roaming free.”

Chief minister Sarbananda Sonowal, while attending an event marking National Press Day, told the media that he had instructed the police to take immediate action against the culprits.

The same was echoed by Parthasarathi Mahanta, the superintendent of police (SP), Kamrup district. “The culprits will be punished as per law,” he told the media.

On Monday, protests took place both in Mirza and Guwahati, with journalists and civil society members questioning the safety of journalists under the current regime. Local press bodies have also issued statements condemning the incident.

Also read: UP Journalist ‘Assaulted’ for Covering Illegal Use of Machines in MNREGA Work

Sanjoy Ray, the general secretary of Guwahati Press Club told The Wire, “The incident of attack on journalist Milan Mahanta by some anti-social elements and that too in broad daylight is highly condemnable. We have taken up the matter with the senior police officials demanding that culprits be arrested at the earliest. Security of journalists has become a major area of concern and the government, particularly the law enforcers, must get their acts together to prevent such attacks.”

With journalists being targeted for questioning the state machinery from different parts of India, the latest incident in Assam has prompted politicians to question the ruling BJP and the emerging pattern of jailing and attacks on scribes in the state.

Debabrata Saikia, the leader of the opposition in the Assam legislative assembly, told The Wire, “Ever since the BJP has gained political power, there have been attacks on journalists and the media. Whether it is Gauri Lankesh or Milan Mahanta the pattern is the same. We are questioning BJP leaders both at the Centre and at the state as to what is leading to such incidents, and why they are not preventing? We demand strict action against the perpetrators.”

Param Prakash Gogoi, a senior journalist for Pratidin, speaking to The Wire said, “The brazenness of the act in front of the public is shocking. But what remains to be seen whether the culprits will be caught. It is unbelievable that such an incident can occur.”