"Was it pressure from from the government that does not want any view critical of its failing policy of violence in Kashmir? " 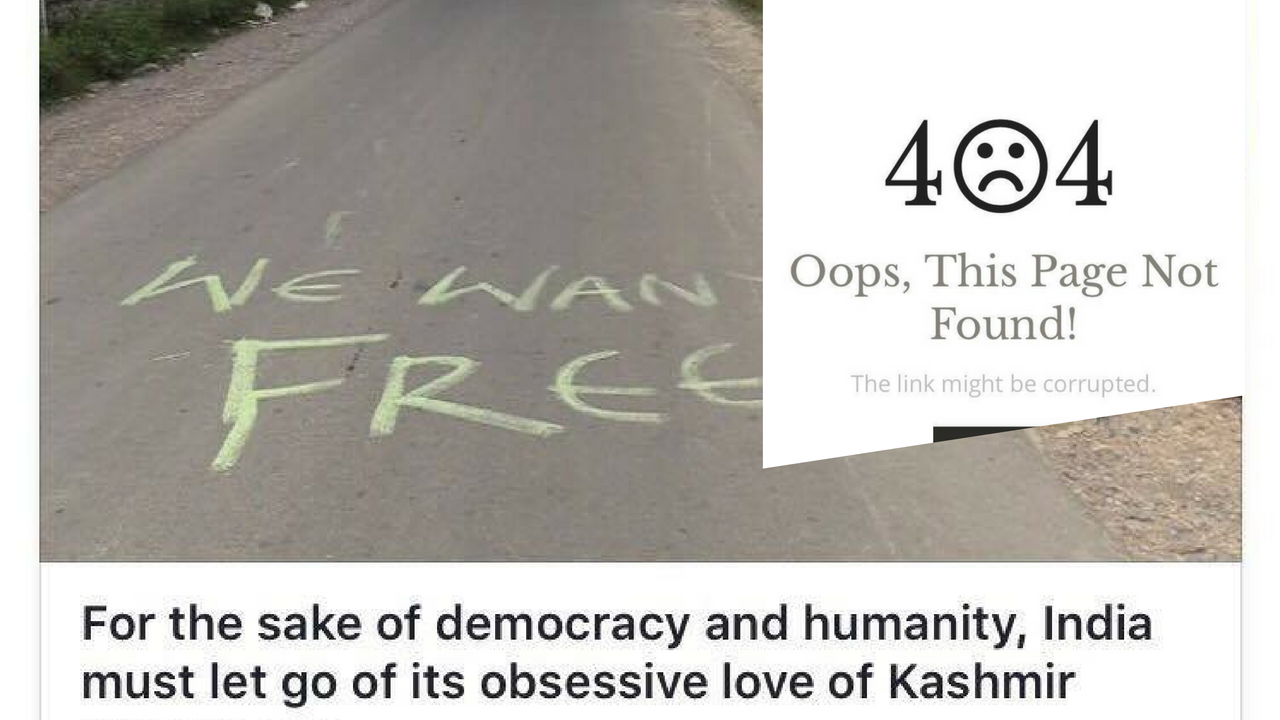 World Is One News (WION), Zee Media’s global english news channel, commissioned an analytical article on the ongoing uprising in Kashmir and the idea was for its publication to coincide with India’s independence day. Given that I am public about my views that are critical of state violence, the article that I submitted would not have come as a surprise to the editors. In fact, I was thanked for the well written and well argued piece and when the publication was delayed and I enquired, I was told that for the reason of “balance” they were asking another commentator with a different perspective to write another piece.

When the article came out on 19 August, I noted that the other piece was about India’s new found interest in Balochistan problem. Hundreds of people shared my article on social media and thanked me for a critical yet measured approach to Indian democracy and Kashmir. I noticed that the article was taken down around midnight of 19-20th August. My enquiry to the commissioning editor drew the response that the piece should still be up for she herself had shared it on her Facebook page. Even WION’s twitter handle asked me for the link when I asked why they took it down. The article was not there and since then my formal queries to the editor and to WION via Facebook, Twitter and email have drawn a blank. I noted that DNA newspaper had republished the same article ascribing it to WION but even that link stopped working by the evening of 20th August.

I am aware of growing intolerance and bigotry in the Indian public space and understand that liberals have to negotiate between competing pressures, including that of market, nation, civil society and the duty to speak truth to power. Yet, this experience comes as a rude shock. If portals such as WION, which I believe is connected to Zee news media, want to maintain credibility, they have to come clean. What changed between the publication of my article early on 19th August and later that night that it was taken down? Was it pressure from the government that did not want a view critical of its failing policy of violence in Kashmir? Or was it a diktat from the proprietors because they felt that WION must only publish articles supportive of the state and throw out the ideals of speaking truth to power? I challenge anyone to highlight a single sentence that is untrue or which promotes anything other than greater democratisation. As a matter of courtesy, if not professionalism, WION must provide an answer as to why this article that they had commissioned in the first place and published was censored and pulled down.

Here’s the full text of the article:

“There is more than a month of deafening official silence over Kashmir. The silence from the Prime Minister’s Office prevailed despite the killings of more than 66 unarmed civilians. Pellet attacks made hundreds blind and thousands of protesters were injured and incarcerated. Recently, Indian Prime Minister Narendra Modi talked about how “Every Indian love Kashmir” while offering no concrete proposal to assuage the tension in the disputed state of Jammu and Kashmir.

While a Hindu nationalist himself, Modi’s stance, in fact, is in continuity with erstwhile dominant secular nationalists who too argued that Kashmir is an integral part of the country. Over the years, nationalists of all kinds have argued that normalcy and peace would return only with the resigned acceptance by Kashmiris of the status quo.

Kashmiris reject this assumption and are demanding freedom from India.

The disconnect between India and Kashmir could not be starker. The current phase of uprising should be understood as part of the longer movement to secure the right to self-determination by Kashmiris since 1947. There has been an even longer struggle by disenfranchised Muslims who were demographically the majority but culturally and politically marginalised under Hindu Dogra rulers.

There is a proprietorial desire of Indians for Kashmir. It is hard to miss the repeated insistence that there won’t be a compromise. Such attitude reflects cartographical fiction, sadistic obsession, compulsive dehumanisation, and cultivated ignorance that are integral to the idea and practice of patriarchal nation-state, that is, India.

Parts of the state are under Pakistan control and parts under China and, yet, any map that represents this de facto reality is deemed illegal in India.

Human rights abuses of Kashmiris, include torture, excessive force, enforced disappearance, rape, sexual violence, massacres and extra-judicial killings. The political right to self-determination is denied despite the promise of a plebiscite. These are the faces of “love” that Kashmiris get.

Various civil society organisations and international human rights bodies have highlighted the fact that sadistic state violence goes unpunished; none of the safeguards of laws work, allowing impunity to armed forces work. An emergency law, such as the Armed Forces Special Powers Act continues without a break in Kashmir for more than a quarter of a century. In this time, not a single permission has been granted by Ministry of Home Affairs or Ministry of Defence for the prosecution of an armed personnel under this Act. Such omission speaks volumes about the sad state of democratic accountability in the state.

Most Indians remain unaware of the level of systemic and everyday violence Kashmiris have to live under because the national media behaves like nationalist media and, largely, endorses the action of the armed forces. In the meantime the political class, right, left and centre, blame Pakistan for all the ills.

It is easy to dismiss the current uprising using clichés of “armed resistance by a few misguided youth”, “proxy war by Pakistan”, “self-interested separatists”, “Islamist extremism”, “Muslim separatism”,”terrorism”, and so on. The resilient nature of the anti-India movement, however, makes it abundantly clear that it is popular resistance against colonial rule. Indians prefer the narrative of being a victim of colonisation, and never an oppressor themselves, and yet Indian rule in Kashmir is akin to the conventional form of colonialism.

Colonialism and colonisation involve systemic and structural dominance and subservience. It forces an asymmetrical relationship between the coloniser and the colonised. When a foreign power imposes a political rule, it gains control over the narratives through which the rule is perceived and represented.

A society subjected to an alien government experiences economic exploitation, cultural transformation, and militarisation. Development measures turn into means of control. The society is denied of rights and becomes subject to surveillance. The everyday epistemic and corporeal violence the society goes through become tangible in differential values that are accorded to human lives; clearly, the life of those with power carries more worth than others less privileged.

All these aspects of colonialism are evident when we look at Indian rule over Kashmiris.

The interpretative lens used to portray the territorial conflict in Kashmir significantly elides the question of how the conflict is experienced by Kashmiris.

It is undeniable that both the states of Pakistan and India are occupying Kashmir. It is India, however, that has been most violently colonial in governing Kashmiri body politics as well as Kashmiri bodies through various mechanisms of control. Therefore, scholars and analysts from, and about, India, have to start asking difficult questions about colonialism, and the corollary of dehumanisation, that seems to have become integral to the idea of the nation-state of India.

The current uprising, like the armed insurgency of the 1990s or the popular protests of 2008, 2009 and 2010, may be crushed using brute force, exhaustion, and through divide and rule approach. However, the social and political behaviour of public makes it clear that there is no fear, leave alone love, of India amongst most Kashmiris. The dominant expression is of love for azaadi that is freedom from and not within India.

There is not denying that there are serious differences along religious, regional and ethnic lines amongst people of Jammu and Kashmir over the future – should it be part of India, part of Pakistan or independent state – but those differences are inevitable part any struggle for freedom, justice, and dignity. Rather than legitimise all forms of dehumanising violence against Kashmiri Muslims by cynically asking “what about Pundits?” or “what about POK?” or in recent times “what about Balochistan”, Indians should first and foremost be recognising and rejecting injustices done in their name.

The resistance movement in Kashmir has a lot to reflect over when it comes to its inclusiveness. Pakistan’s hypocritical stance is open to criticism. Pakistan claims to support the self-determination of the Kashmiri people but bases it on the UN resolution, which denies independence as an option. None of these takes away from the most conspicuous fact of denial of self-determination and human rights by India.

The most pertinent question is whether Indians can reimagine their nation in ways that are democratic enough to allow the right to self-determination to Kashmiris as promised in 1947.

Is India post-colonial enough to end dehumanising colonial machinery of violence imposed on the people of Kashmir?

Is India responsible enough to negotiate sincerely with various actors in the conflict and embrace azaadi – the right of all people of Jammu and Kashmir to decide their political fate? Otherwise, the paradox of running “world’s most militarised place” in the “world’s largest democracy” will puncture forever the very idea of democratic India.”

Note: The Wire emailed the concerned commissioning editor from WION for a response but didn’t receive any response at the time of the publication of this article. The story will be updated as soon as we hear back from them.

Professor Dibyesh Anand is Head of Department of Politics and International Relations at London’s University of Westminster and works on majority minority relations and politics of state-people disconnect in China and India.