A. Singh and his partner Pratishtha Singh filed a complaint after the channel ran a video alleging that the complainant was one of the people who harassed their reporter, Shivani Gupta, while reporting at Vadgam MLA Jignesh Mevani's 'flop show' rally. 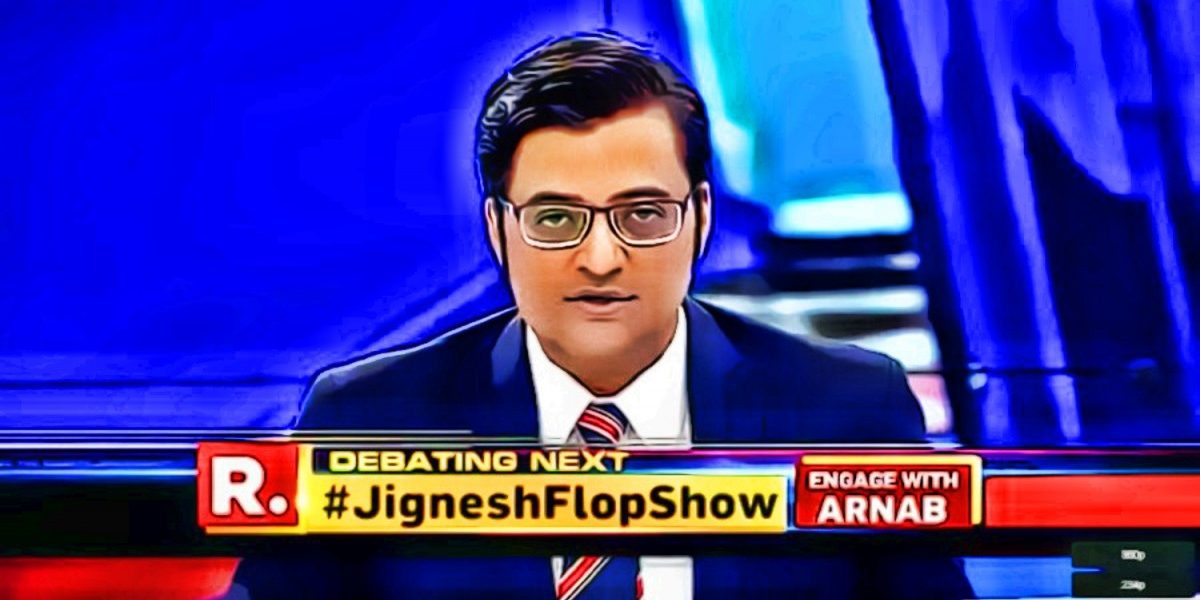 New Delhi: The News Broadcasting Standards Authority (NBSA), an independent body set up by the News Broadcasters Association, on August 30 directed BJP MP Rajeev Chandrashekhar’s news channel Republic TV to air a full-screen apology to its viewers for inappropriate comments made by its editor-in-chief Arnab Goswami.

But despite the deadline given by the body passing by – before the 9 pm debate on September 7, 2018 – the channel has yet to tender an apology.

The complaint was filed by A. Singh and his partner Pratishtha Singh after the channel ran a video alleging that the complainant was one of the people who harassed their reporter, Shivani Gupta, while reporting at Vadgam MLA Jignesh Mevani’s ‘flop show’ rally.

“I want their faces circled more. I want the family members of these cheap, perverse goons to watch their family members doing this … at this event which was the Jignesh flop show. Let’s name and shame these people,” said Goswami at the beginning of the debate as a small video of the event played on the screen.

Multiple times during the hour-long debate, Goswami can be seen calling the complainant a “vulgar thing”, “pervert”, “goon”, “sexist”, “hyena” and “anti-Indian”. The channel reportedly removed the video from its website and YouTube account after the complainant sent them multiple mails. The debate on the topic is still available on the channel’s website.

In the video, Gupta can be seen surrounded by a small crowd as she reports on the lack of supporters at the event. In the end she had to be escorted away by the police.

In its original reply, Republic TV had claimed that Singh was “interfering with the reporting done by its reporter by moving towards her in an intimidating and aggressive manner and shouting the words “jhooth bol rahi hai (she is lying)” as she was confronting another person harassing her”. They also claimed that the complainant engaged in further sloganeering aimed at the reporter.

Responding to the channel’s allegations, Singh said that in the video he can be seen saying, “Koi aapko tang nahi kar raha, aap jhooth bol rahi hai (You are lying. nobody is bothering you.)” and can’t be labelled a “vulgar thug”, “pervert”, “goon”, “sexist” or “anti-Indian” on the basis of that. Demanding an apology from the channel, Singh and his partner claimed that after the show was aired, many of their relatives called expressing shock and the broadcast has bought shame and loss of reputation to the family.

In its August 30 order, NBSA noted, “The footage does not show use of any objectionable words by the complainant or any gesture which can be described as “lewd” or “threatening”.”

Chastising Goswami for his choice of language, NBSA said, “Use of words like ‘I am going to show these crude, lewd hyenas/show the dirty faces of lewd, cheap, vulgar, sexist, pervert anti-Indian goons‘ by Mr Arnab Goswami who was anchoring the programme was totally unwarranted and unjustified and the same was in violation of the broadcasting standards.”

This wasn’t the sole incident of misreporting by the channel while covering this story. They were forced to apologise to an ABP reporter after Goswami labelled him as one of “one of the thugs who tried to intimidate Gupta”.

#JigneshFlopShow | Arnab: Tonight, I will put out videos circling the pictures of the vulgar thugs who tried to intimidate @ShivaniGupta_5 and failed. Republic reporters represent young India much better than your goons, @jigneshmevani80 https://t.co/lpnVZxoMbs

Turns out the reporter was actually trying to make sure Gupta is escorted away safely from the mob.

Dear @republic the person you are claiming to be the man who heckled your female journalist at Mevani rally in Delhi is actually one of the finest TV reporter in Hindi journalism. @jainendrakumar is currently with @abpnewshindi
You should apologies for this ASAP@milindkhandekar pic.twitter.com/Z1AkFKuoOP

In its apology, Republic TV said, “On the debate yesterday, we inadvertently circled visual of a reporter from ABP News, Jainendra Kumar, while running pictures of our News Editor, Shivani Gupta, being targeted by individuals present at the Jignesh Mevani rally.” The clarification stated that visuals indicative of Kumar being the heckler was an unintentional oversight by the channel’s video editor, reported NewsLaundry.

.@republic TV apologises for calling ABP News correspondent @jainendrakumar a ‘goon’ during its report on #JigneshMevani‘s rally. The channel says it was a mistake. pic.twitter.com/rsKznMgvdq

Republic TV also stated that their apology was issued “as per the highest norms of corrigendum and clarification on such editorial matters” and added that this was a follow up on ABP News’ behest.

This story was updated at 9:15 pm on September 7 after the 9 pm debate on Republic TV began.