The Srinagar office of Kashmir Times, of which Bhasin is executive editor, was sealed on Monday. 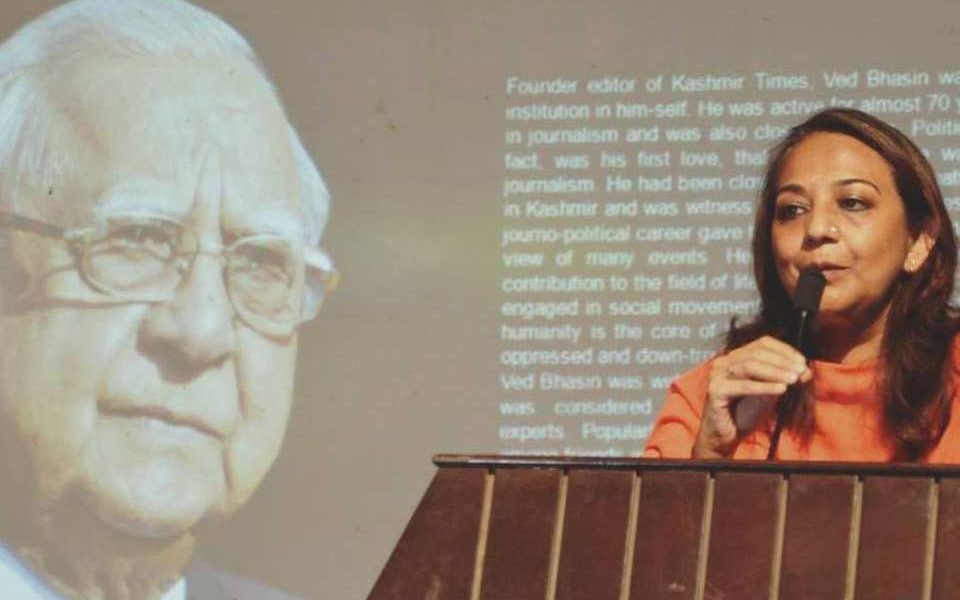 Srinagar: Officials from the Jammu and Kashmir administration on Monday sealed the Srinagar office of the Kashmir Times, a prominent English daily in J&K. Located in the Press Enclave, where most newspapers offices are located in government-owned apartment buildings, an office was allotted to Kashmir Times during the region’s most turbulent times – the 1990s.

Soon after the office was sealed, Anuradha Bhasin, the newspaper’s executive editor who lives in Jammu, alleged that no prior notice was sent to her. The decision was “vendetta” by the government “for speaking out” and for her journalistic work, which has been widely lauded.

A few days ago, The Wire spoke to Anuradha, who alleged that there is a “pattern” in these “attacks”. The clampdown intensified, she argued, after she took a critical stance on Central government policies and spoke for press freedom of Kashmir after the dilution of Article 370.

Earlier, on October 4, Anuradha had alleged assault by the brother of a former National Conference legislator. According to her, a few people barged into her government-allotted apartment in Jammu and ransacked it. Bhasin alleged that the “goons were acting in connivance with the (government) estates department and some police personnel”.

Since the dilution of Article 370 in August 2019, Anuradha Bhasin has become a rare vocal voice about press freedom in Kashmir, the communication gag and human rights abuses.

In her school days, Bhasin was interested in writing short stories and poems, which would also get published in the Kashmir Times’ children’s column. The newspaper was headed by her father, Ved Bhasin, who was a political activist and one of the most prominent journalists from Jammu and Kashmir.

Ved started Kashmir Times in 1955 and nourished it for more than 60 years. Now, the newspaper is one of the oldest english dailies in J&K.

When Anuradha started showing interest in journalism as a teenager, her father both encouraged her and told her to stay away from the profession. “Having gone through various struggles, my father was protective and didn’t want me to join the profession,” she told The Wire.

Ved offered a space for young writers in his newspaper, which encouraged her to write and grew her interest in journalism growing.

In 1989, Anuradha formally joined the Kashmir Times as a trainee reporter, while she was also enrolled in a law course in Delhi University. She wasn’t able to complete her course, however, because her mother suddenly got sick.

The timing coincided with a turbulent period in Jammu and Kashmir. There were widespread allegations of rigging in that year’s state elections. A joint front of different separatist political parties had come together under a single banner, Muslim United Front (MUF), and decided to fight the elections. With Farooq Abdullah coming to power, most MUF leaders took on an anti-India stand. Militancy erupted in Kashmir and leaders from the MUF were leading from the front.

Kashmir descended into violent armed conflict. At the same time, India’s northern state of Punjab, which has close proximity to Jammu, was also witnessing bloodshed after the government clamped down on separatist militants from the Khalistan movement.

“As I started working, I got caught in the two conflicts. I gave up my studies for journalism. It was the time when I got curious to know about things around me,” said Anuradha.

Anuradha remembers when her classmates in school would talk about religion and God. These were the words she had not heard at her home from her parents. “There was no particular religion my parents would follow,” she said.

Once, after she repeatedly heard her classmates talking about religion, she went to ask her father about it. “I named several Gods and asked him which one he believed in,” she said “He told me, ‘I believe in you’.”

She was taken aback by the answer, and wasn’t sure what he meant. But gradually, she said, the meaning dawned on her. “He had faith in the creation, he believed in humans and humanity.”

This lesson is what Anuradha has lived her life by, she said. “Having faith in human beings is important. Have that faith. We must live up to the faith of another human in us.”

Her courage, Anuradha said, comes from seeing her father take stands, even when he was targeted for his courageous journalism. She has several memories of her father, Ved, from when he stood tall for writing the truth and was unrelenting. One memory she has is from 1983, when she was a school student. Her father was attacked by a Hindu right-wing group. “Almost 200 men barged into his office. They attacked him with batons and sharp-edged weapons,” she recalled.

Ved Bhasin survived the assault and many newspapers wrote solidarity pieces for him. This made Anuradha understand that her father wasn’t just an ordinary person, but someone whose values and beliefs made some groups want to silence him.

The cost of journalism

Curiosity and the quest for writing the truth, Bhasin says, has made her keep doing her job. She believes, though, that there are many who have been worse impacted than her. “There is a generation of people who live through fear, and it doesn’t matter to them, and I have not gone through it the same way. They have been impacted more even though there are still huge costs to speak out or write,” she said.

In 1992, Bhasin said, the paper was banned by a fringe Shiv Sena group and hawkers were attacked. “My colleagues were intimidated as well.”

Now, the physical threats might have reduced, Bhasin said, but “the government has a more sophisticated ways to attack and silence us”.

In 2010, government advertisements in the newspaper were stopped, which continues till this date.

Bhasin believes that this has affected the quality of journalism in her newspaper. “It also meant cutting costs on our staff. We weren’t able to bring in many voices,” she said.

After Article 370 was read down, the government imposed a complete communication blackout on the people of J&K. Anuradha filed a petition in the Supreme Court and argued that the “government should reconsider its decision”.

She said the restrictions were passed on the belief that there would be “a danger to law and order. However, public order is not the same as law and order and neither was at risk when the order was passed.”

At that time, local publications had come to halt because of the communications blackout. The government had silenced the entire local media except a few independent organisations, which would barely write about the human rights violation.

Anuradha was grappling with several questions, like who she should talk to to understand the situation on the ground. She tried hard to get in touch with her reporters, but it proved impossible.

“There were many things going on in my mind, like how could I carry the information and disseminate it. I felt that I didn’t know anything, and this is my profession, to know,” she said.

That’s when she decided to legally challenge the government’s decision.  “Before this, there were unrests like in 2008, 2010 and 2016 but a complete blackout never happened before,” she said.

Difficult to speak out

Since last year, journalists in Kashmir have been increasingly intimidated and even charged under draconian laws, which has pushed the local media to self-censorship .

“The sense of intimidation among Kashmiri journalists is more than I am facing. It is difficult for them to speak more openly,” she says, adding “either we have to fight back or surrender”.

Bhasin told The Wire that she is worried about the future of the local media if the current state of affairs continues.

“There are minimal attempts to speak truth. Criticism of the government has disappeared in the editorials,” she said. “Except a few independent newspapers which give space to important things, larger stories from Kashmir are missing.”

“The Kashmir press was growing vibrantly,” she said, adding, “There is huge talent in people. I don’t do a fair job either but it’s challenging and we need to fight unitedly.”