At India Today, Anchors Can Spread Fake News While Editor is Sacked For Speaking Out

Angshukanta Chakraborty was asked to leave for tweeting that news organisations shielding journalists who spread fake news should be tried in court. 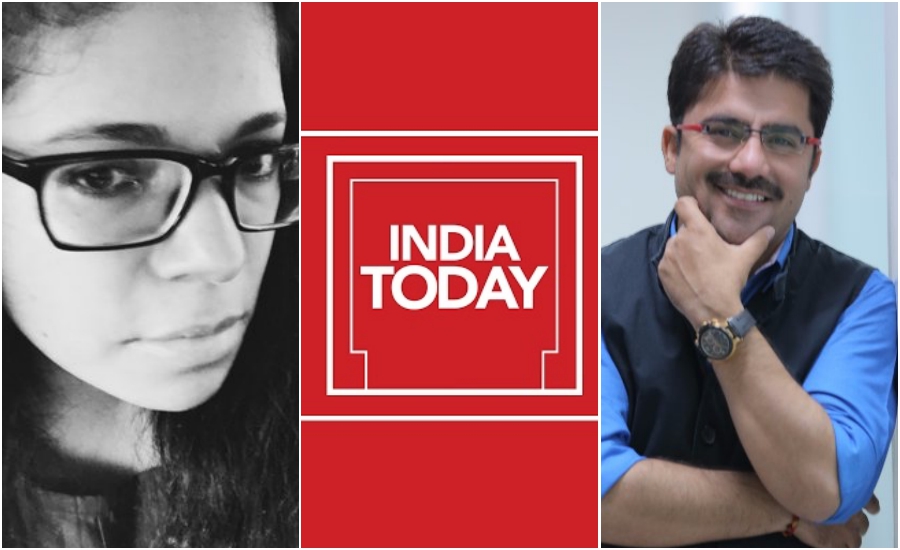 Note: The article has been updated to incorporate India Today and Angshukanta Chakraborty’s response.

New Delhi: The India Today Group has terminated the contract of the political editor of its opinion and commentary platform, DailyO, when she refused to delete a tweet from her personal account. 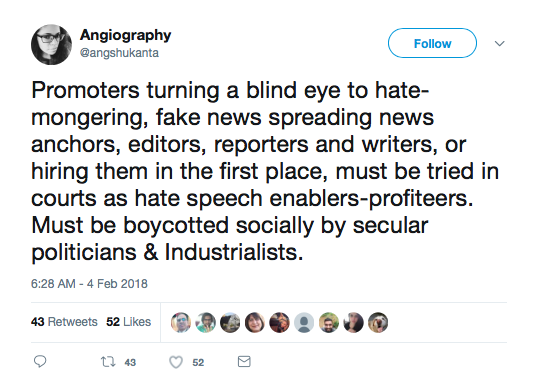 The tweet, which was posted on February 4 was a general comment on media organisations shielding journalists spreading fake news, claimed Angshukanta Chakraborty. While the tweet originally didn’t receive much traction (retweets and likes), Chakraborty, whose work has been critical of the ruling government, received a call from a senior colleague from the editorial team asking her to delete it. It is likely the tweet was seen as hitting close to home.

In the days before, an anchor from the India Today Group’s Hindi television channel, Rohit Sardana, had been called out on social media for inflammatory, tendentious reports on Kasganj that contained a fair dose of fabricated information, especially the claim, repeated in this tweet, that a group of Muslims in the Uttar Pradesh town had stopped a group of Hindu youths from unfurling the Indian flag:

The India Today Group responded to criticism of his coverage by sending reporters who gave a more accurate account of the violence which saw one Hindu killed and two Muslims injured. But no visible action appears to have been initiated against Sardana.

Abhijit Majumder, editor of Mail Today, another group media platform, was also called out for pushing fake news on Twitter when he claimed that not one but two Hindus had been killed in the violence.

When Chakraborty refused to comply with the ‘delete’ order, a meeting of senior editorial staff of the organisation was convened on February 6 where she was once again asked to take down the tweet.

A week after the inconclusive meeting, Chakraborty received a call from the human resources team and was given three options:

“I have never been asked to censor my opinion. DailyO as a platform is very supportive,” claimed Chakraborty, who would have completed three years with the organisation in May.

The Wire has sent a questionnaire about her sacking to DailyO editor Jairaj Singh, group’s social media head Prerna Mishra and vice chairperson Kalli Purie. Chakraborty’s services were terminated due to breach of editorial conduct, according to Mishra. India Today‘s complete response is at the end of the article.

This isn’t the first time India Today journalists’s social media posts have been censored. More tellingly, a culture of self-censorship appears to have taken root in their newsroom since Kalli Purie took over, a journalist with the media group told The Wire. This person was also recently advised to delete a tweet.

On January 3, employees received a mail from the group’s management reiterating its social media policy and asking everyone to add a disclaimer that “the views expressed by them and retweets made are in personal capacity”. Chakraborty, like most employees, complied with the policy.

Rahul Kanwal seems to be the only senior editor who hasn’t added the disclaimer in his Twitter bio.

The management also implied that they didn’t wish to censor their employees’ social media accounts. “We respect that freedom of expression and repose full trust that our influencers will never cross the line on compromising basic communication courtesy while sharing views and opinion from their personal handles.”

However, the social media policy seems to be applied in a politically selective manner by the India Today Group.

As his Twitter timeline makes clear, Aaj Tak anchor Rohit Saradana seems to be unaware of this clause from his organisation’s social media policy:

Editorial employees must not use their positions to promote personal agendas or causes – implicitly or explicitly. Nor should they allow their internet activities to undermine the impartiality of the India Today Group’s coverage, in fact, intent, or in appearance.

“What kind of a secular country have we created? Man chanting “Bharat Mata ki Jai” was shot. He left home carrying the Indian flag but returned covered in it. If not in India, should we go to Pakistan to wave the Indian flag?” read one of the tweets Sardana retweeted.

“Intellectuals shield those who hoist the Pakistani flag in India but maintain silence when a man waving the Indian flag in Kasganj was killed,” he tweeted. 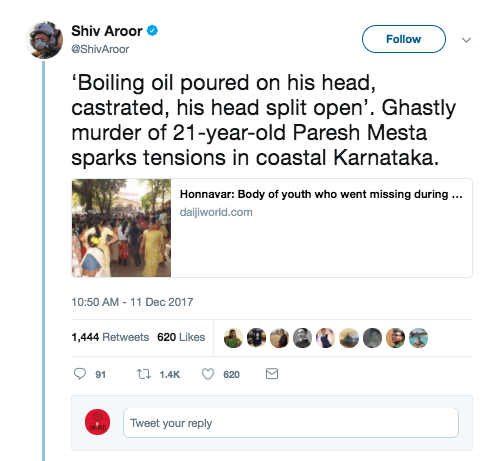 This graphic tweet about the mysterious death of a young Hindu man, which sparked communal tensions in coastal Karnataka’s Uttara Kannada district, also turned out to be fake news.

In this instance, the media house’s advice to employees while sharing news is this:

Authentication of information and verifying sources from the online world is essential, similar to an offline or electronic story. When transmitting information online – as in re-tweeting material from other sources – apply the same standards and level of caution you would in more formal publication or broadcast.

Later, Aroor clarified his position and claimed that the “original tweet promoting the show carried the gruesome allegations of the BJP MP and sources on the ground” – a tweet that he personally composed. Unlike his earlier tweet, that one didn’t carry quotes indicating that it was an allegation.

The debate over how much journalists should reveal on social media about their political preferences has become even more relevant as the polity and society get increasingly polarised.

On several occasions, journalists with the India Today Group have been accused of spreading fake news and resorting to hate mongering while reporting about certain communities. Mail Today editor Abhijit Majumder, who is a vocal supporter of Prime Minister Narendra Modi, was caught spreading rumours after clashes in Uttar Pradesh’s Kasganj: 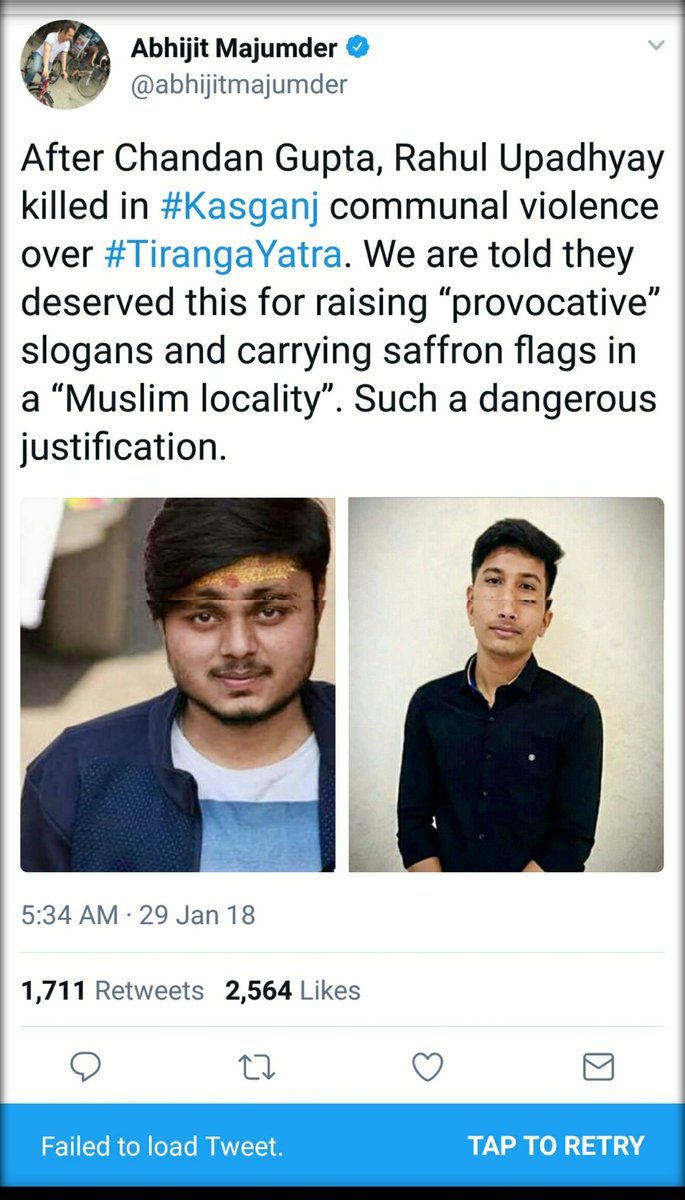 The fake news was later debunked by the local police and Majumder deleted his tweet.

In May 2017, the group’s Hindi channel Aaj Tak went overboard reporting that the Indian Army had destroyed Pakistani posts and killed several enemy soldiers. The report was far from the truth.

In April 2017, Aaj Tak ran a fatwa as news that was declared fake by one of its own websites 18 months ago.

After demonetisation, a group of journalists from Aaj Tak, led by its anchor Sweta Singh, claimed that the new 2,000-rupee note had an inbuilt nano chip that would be able to communicate with a satellite if a bunch of notes were stashed somewhere, even if 120 metres underground.

This, too, was fake news. Read this piece by The Wire‘s science editor Vasudevan Mukunth debunking the bizarre claim.

In April 2017, India Today published an agency copy claiming that the Indian Space Research Organisation (ISRO) had plans to mine helium-3 from the Moon to help manage India’s energy needs. ISRO has no such plans.

In the same month, the news organisation also hailed UP CM Yogi Adityanath for his “anti-corruption move that will end quotas in private colleges”. The claims made in the viral story were refuted by the state authorities.

“Angshukanta Chakravorty’s services were terminated due to breach of editorial conduct. The India Today Group prides itself in being the gold standard of credible journalism. Our Code of Conduct is sacrosanct across all our mediums, including social media. Actions contrary to our editorial ethos have no place in our organisation. As was done in this case, the concerned employee is counselled multiple times prior to taking any action. The violation is also investigated by an internal panel and taken to logical conclusion. This individual case, being presented in any other manner, is mala fide and should be understood as such.”

Update: Angshukanta Chakraborty issued a statement on Wednesday (February 14) slamming the organisation for ‘unlawfully’ terminating her contract. In her letter to the India Today Group, a copy of which she also tweeted on Wednesday, Chakraborty shared her ordeal in detail. The Wire is reproducing the full text of the letter here.