Two reporters of the newspaper, Etilaatroz, among several others have spoken of having been brutally beaten in Taliban custody. 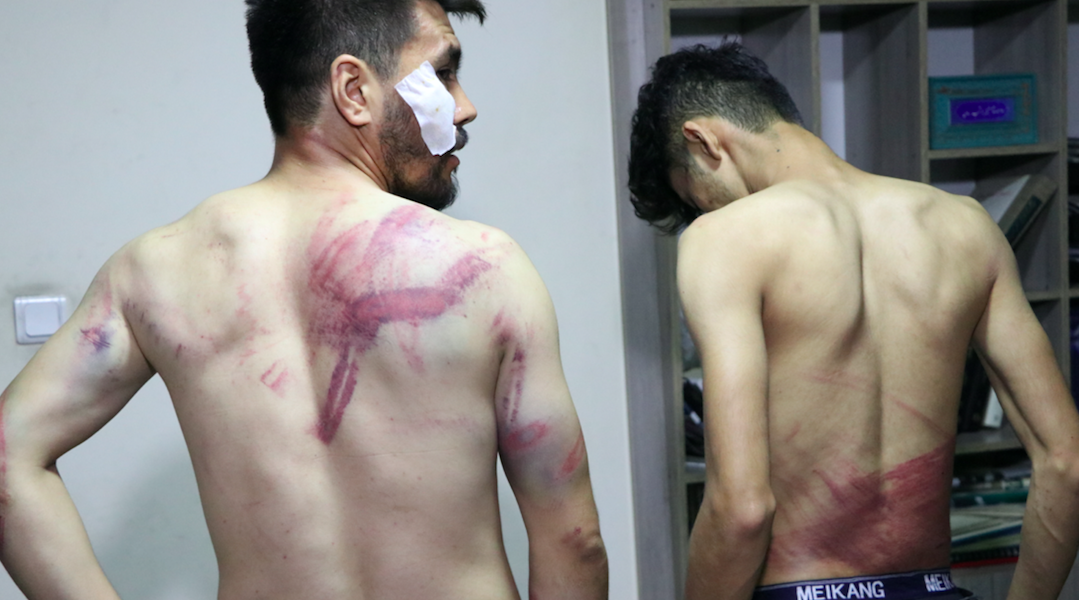 Journalists show their injuries after being beaten by the Taliban in Kabul, Afghanistan September 8, 2021 in this picture obtained from social media. Photo: Etilaatroz/via Reuters

New Delhi: Two Afghan journalists from Kabul-based newspaper Etilaatroz were brutally beaten with cables while in custody after the Taliban detained them for covering protests by women in the Afghan capital.

On Wednesday, September 8, women protestors came out on the streets for the second consecutive day in Kabul following the formation of the new government. Their ranks were broken by Taliban fighters who used violence. Journalists were beaten up and foreign reporters were taken to the police station.

According to Los Angeles Times, protestors had started to walk from a southwestern neighbourhood, holding placards aloft and shouting slogans. They were protesting against the lack of diversity in the caretaker government inaugurated on Tuesday night, which does not have anyone from the Hazara community or women.

They were first accosted by four Taliban fighters, who tried to push them back. However, after an argument with them, the women were allowed to continue their protest. But, another group of fighters a little way ahead turned their attention on the journalists covering the rally.

After surrounding them, the armed Taliban men lunged for one of the cameras of the two LA Times journalists.

According to the report, the two foreign correspondents were taken to Karte Char police station, where several Afghan journalists had already been detained.

A journalist shows his injuries after being beaten by the Taliban in Kabul, Afghanistan September 8, 2021. Photo: Etilaatroz/via Reuters

After examining their media permit, they were allowed to leave, but only after they were told to delete their photos and told that taking photographs of women was un-Islamic.

Twenty-year-old video editor of Etilaatroz, Taqi Daryabi, was grabbed by the Taliban and dragged into the station. He told LA Times that he was pushed to the ground, tortured and beaten till he was unconscious. Then he was taken to a yard, and water poured on him.

His colleague, Nemat Naqdi, 28, was also brought in.

Quoted in LA Times, Naqdi said that they kept shouting that they were journalists, but nobody cared. “I thought they were going to kill me…They kept on ridiculing us, asking if we were filming them”.

He told The New York Times that instead of looking at his ID card, the Taliban accused him of organising the protests. “They took me into a room, tied my hands with a scarf and started beating me with a cable”.

Three other colleagues of theirs who went to the police station to get the two reporters released, were also detained.

They were finally released, and could hardly walk.

Etilaatroz’s publisher, Zaki Daryabi, posted a video on Twitter that showed Taqi Daryabi limping as two colleagues supported him. Daryabi noted that his colleagues had been “extremely, differently, unprecedentedly tortured” for four hours, during which they fainted multiple times.

The history of #Afghanistan journalism always remember the first day of #Taliban cabinet announcement and this photo of @etilaatroz journalists who were tortured by Taliban force.

Condemnable to the core. https://t.co/b53OVy8MoK

It is painful to watch. The physical will heal but the bruise this is causing among afghans is going to be harder to heal. Stop this madness. @ZDaryabi https://t.co/pVBqKF2lMZ

In a statement, the international NGO Human Rights Watch stated that the Taliban had claimed that they would allow media to function as long as they respected Islamic values. But, they are “increasingly preventing journalists from reporting on demonstrations,” said Patricia Gossman, associate Asia director of HRW.

“The Taliban need to ensure that all journalists are able to carry out their work without abusive restrictions or fear of retribution.”

Earlier this week, the Taliban had also detained a camera person with TOLO News, Wahid Ahmadi, when recording a protest in Kabul on Tuesday. He was released three hours later after his employers contacted the Taliban cultural commission.

According to the Committee to Protect Journalists, other journalists were also assaulted when they filmed protests in Kabul.

Two journalists, who spoke to CPJ on condition of anonymity, said that they were handcuffed and taken to the office of the National Directorate of Security on Wednesday morning.

“While in custody, Taliban fighters shoved both the journalists to the ground and beat and kicked the first journalist on his head, shoulders, back, and legs, and the second journalist on his arm, head, chest, and back, they said,” said the CPJ report.

At around noon, the Taliban detained Mirzahussain Sadid, a correspondent with Afghan Notes, a project of the US-based content creation agency Fasila.

CPJ also spoke to another journalist with an international broadcaster who was also taken into custody on Wednesday.

“While in custody, the fighters pointed their guns at the journalist’s head, and threatened that if he published a report about the Taliban, they would shoot him in the head, he said. The journalist was released approximately two hours later, he said, adding that he was not beaten and did not sustain any physical injuries, but was left psychologically shaken.”

Meanwhile, the Taliban’s new ministry of interior, headed by UN-sanctioned Sirajuddin Haqqani, issued regulations for organising protests, which included the clause that official permission has to be taken at least three hours ahead of an agitation.