A photographer's plan to pay tribute to the 1985 National Geographic cover has revealed the disturbing truth about what is reflected in Sharbat Gula's eyes.

A screenshot from Tony Northrup's video.

New Delhi: Tony Northrup was 11 years old in 1985 when an issue of National Geographic arrived on his doorstep, with an unforgettable cover-photo of a girl with green eyes.

Decades later, Northrup is himself a photographer and a popular photo vlogger. This year, he decided to make a video about Steve McCurry’s iconic image of Sharbat Gula and how its colours and composition inspired millions of people, in addition to Northrup himself, to talk about the plight of refugees.

When he began his research, however, he realised that nothing about the photo was as it seemed – and he would never be able to look at it the same way again.

On February 27, Northrup published a video on his YouTube channel saying, “This isn’t the story I wanted to tell,” detailing the bleak reality of what McCurry had done to obtain that photograph in 1984.

The video was taken down within days after McCurry’s team”publicly accused us of slander,” Northrup told The Wire.

The veil and the lens

In 1984, McCurry was based in Pakistan, employed as a photojournalist for National Geographic during the early years of the Soviet war in neighbouring Afghanistan. On one shoot, McCurry stepped into an all-girls Islamic religious school. There he took the photo of an eight-year-old student named Sharbat Gula.

In the photograph, Sharbat Gula has piercing green eyes. Wrapped in a tattered maroon shawl, she fixes her gaze at the camera – meeting eyes eventually with millions of people once the picture went on National Geographic‘s June 1985 cover.

The photograph also made McCurry’s career, earning him fame and recognition, and became one of the most globally recognisable photographic portraits ever taken. 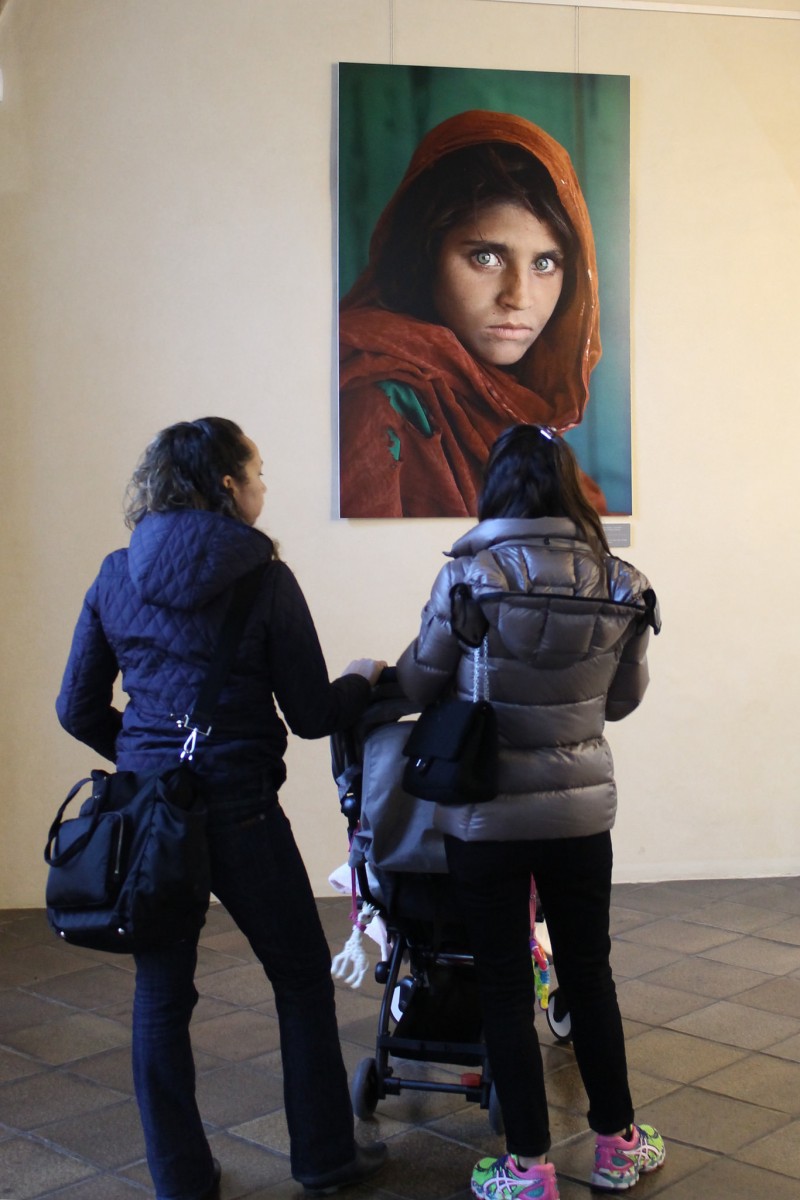 For readers in the West, it was a symbol of Afghanistan – still an anonymous, distant location – or else of refugees in crisis. Yet the story inside the magazine said not a word about Sharbat Gula. Her photo was captioned, “Haunted eyes tell of an Afghan refugee’s fears”, but as Northrup reveals, the fear in those eyes was most likely the fear of Steve McCurry.

Seventeen years after the photograph was published, McCurry joined a crew from National Geographic Television & Film to search for Sharbat Gula. The April 2002 cover-story of the magazine, entitled ‘A Life Revealed’, documented how they found her while also paying further romantic tributes to the 1985 photo.

The 2002 story describes Sharbat Gula as an orphan whose parents were killed in a bombing in Afghanistan, which turned out to be false. She has said that her mother died of appendicitis and that her father was alive when they moved to Pakistan.

The fear in her eyes

Northrup pieced together the situation in which McCurry photographed Sharbat Gula, and offers some startling revelations that should perhaps have been obvious to National Geographic‘s editors, and to the rest of us.

McCurry was a complete stranger, and it is not welcome for a girl of traditional Pashtun culture to reveal her face, share space, make eye contact and be photographed by a man who does not belong to her family.

For the photograph, she had been moved to a different location with better light and a clean background.

When McCurry entered, he spotted Sharbat Gula’s piercing green eyes, though she made an effort to cover her face. McCurry asked her class teacher to instruct her to cooperate. After being compelled to “let him photograph her… she lowered her hands” – in McCurry’s own words – to uncover her face.

“He poses her like an 80s’ glamour shot,” Northrup observes: “shoulder tilted towards the camera, forehead forward, nice light to illuminate the eyes and direct eye contact – something that she would never ever do.”

McCurry wanted to take more pictures but Sharbat Gula fled. No part of the written story mentioned her narrative or even her name (which McCurry did not care to find out). He did not take her consent or her father’s to publish the image.

When Sharbat Gula finally saw the cover that would make her face world-famous, she felt, she later said, “nervous and very sad”.

When the photograph was first published in 1985 and the magazine circulated to millions of readers worldwide, it had only one sentence about her (besides the original caption, ‘Haunted eyes tell of an Afghan refugee’s fears’). It said her eyes were “reflecting the fear of war”.

This is false, Northrup says. The fear in her eyes is that of a student interrupted at school by a male stranger invading her space, her personal boundaries and her culture and leaving without even having learned her name.

McCurry and National Geographic would sell the picture for enormous amounts. Steve McCurry Studios prices their open edition 20″ x 24″ print of Sharbat Gula for $18,000 (Rs 12.8 lakh). Larger prints have been sold for as much as $178,900 at auctions.

Until their return for the follow-up story in 2002, Sharbat Gula received nothing.

Unwanted fame and a hard fate

Sharbat Gula was arrested in 2016 in Pakistan on charges of fraudulent identity. She served 15 days in prison and was then deported to Afghanistan, away from a “very good life in Pakistan”. She blames the photo for her arrest, saying: “The photo created more problems than benefits. It made me famous but also led to my imprisonment.”

Besides, her life continues to be in danger. Being on the cover of a magazine still puts her at risk of being identified by “conservative Afghans who don’t believe women should appear in the media.”

Northrup republished his video with some corrections on March 8.

“Photojournalism has been guilty of awful abuses through history, often exploiting the poor for profit and celebrity,” Northrup says. The continued admiration for ‘Afghan Girl’ and the symbolism projected onto it, despite the exploitative situation in which it was shot, prove that that is still the case – and a sea-change is still necessary.