The editors, readers and writers of newspapers need to tell their proprietors they have to have some non-negotiables. In these times of brazen anti-Muslim violence, you cannot allow anything to pass which adds to fuel to the blazing fire. 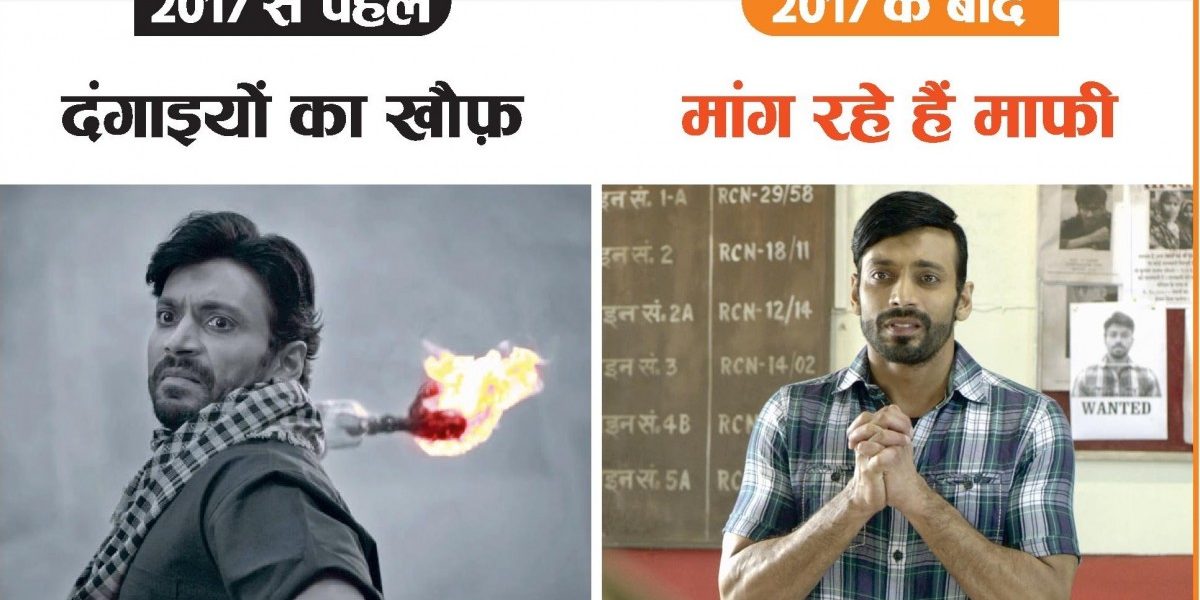 Last week, a front page advertisement by the Uttar Pradesh government in a newspaper I subscribe to made me squirm. It had two images. In the first frame was a young man with a kaffiyeh around his neck, symbolising a terrorist, with a fierce look in his eyes. This, the ad tells us, is a scene from an era before 2017. In the second frame, the same young man is seen with folded hands. Seeking pardon. This apparent transformation has come after 2017, i.e. when the Bharatiya Janata Party came to power in the state. The ad is paid for by taxpayer but cleverly uses the BJP’s colours to reinforce the political message.

You don’t need to be very creative or imaginative to decipher the images and get the message. Even without Prime Minister Modi having already reminded us that the criminals can be recognised by their clothes, the UP government advertisement is open Islamophobic propaganda. I am not a Muslim. Even then it hit me in my guts.

Why should one feel so perturbed at seeing this on the front page of a newspaper? After all, wasn’t it only an advertisement? And was the word Muslim used anywhere in the ad copy? No, but those doing it knew that our movies have already popularised the image as representative of a Muslim. So it is no use denying that this is a crudely coded advertisement aimed at demeaning, defaming and dehumanising Muslim men and, by doing so, also justifying the use of violence against them.

Later I learnt that the advertisement was carried by all newspapers in Uttar Pradesh and Delhi. Hoardings bearing the same image have been put up in different parts of Lucknow. This ad campaign has to be seen in the context of what was done by the Adityanath government to the anti-CAA protesters booked by the police a couple of years ago. It put their names with pictures, addresses and other details on hoardings across Lucknow. It was an unprecedented move. It amounted to the direct incitement of violence against the ant-CAA protesters, by declaring them as criminals without even having been convicted by courts. Most of them were Muslims. This new hoarding now will be seen by the public as a continuation of the earlier hoardings. So, the messaging does not even remain so indirect.

It was not a surprise to see the Hindi media publishing this advertisement because in the last three decades we have seen it aligning more and more with the ideology of the BJP and RSS. The Press Council of India had investigated the role of the Hindi media in the ‘Ram Janma Bhumi Abhiyan’ and found it dangerously partisan, and also responsible for the communal violence that marked the temple movement.  We saw this trend continuing in the following years. One could see the open anti-Muslim stance of most of the newspapers during the Muzaffarnagar communal violence.

But the English media has also found a way to amplify the ideological and political message of the BJP. Since it is the BJP which is running the Union and UP governments, newspapers report all the speeches of the PM , CM and other ministers, even those that have little to do with government and are mostly ideological and political propaganda, often attacking and demeaning the opposition. Nearly all are featured on the front pages, on the pretext that after all it is an event involving the PM.

The claims made by the prime minister and home minister or chief minister of UP are reported as if they are undisputed facts. Even in matters in which the very newspaper has exposed the BJP claims to be bogus.

For example, an English newspaper reported the speech of the UP CM given in Kairana under the headline, ‘Yogi Adityanath promises safety to Kairana families’. Adityanath was repeating a false claim made earlier that Hindu families were being forced to flee because of pressure from Muslims. The same newspaper had at that time investigated the claim and found it to be false. There were other fact finding reports too which had nailed the lies in  the claim. But when the same paper reported the CM’s speech this time, it presented its own earlier report in such a way that it gave some credence to the false claim of the CM:

“The CM said Kairana’s standing as a major industrial town and centre of classical music had suffered, along with towns like Kandhla, due to “the criminalisation of politics in the early 1990s and the politicisation of professional criminals. Hindu businessmen and other Hindus were forced to migrate from here on a large scale”.

Since 2017 though, Adityanath added, “Due to our government’s policy of zero tolerance towards crime and criminals, many families have returned.”

“In a video released by the state government, several people whom the CM met can be heard praising his government’s measures in making them feel “secure”. When a Kairana local tells him they had been very afraid of gangster Mukim Kala, and were relieved hearing he had been killed in Chitrakoot jail following a gang dispute, Adityanath says: “He got what he deserved.”

One can see what is happening here. The name of the criminal is mentioned specifically. As said, the paper does try to temper Adityanath’s remarks:

“Then BJP MP Hukum Singh had claimed that close to 350 Hindus had left under threats from criminals from Kairana, one of the towns hit by the 2013 riots. However, an investigation by the Indian Express had found several discrepancies in this.”

This disclaimer does not in any manner lessen the effect of the report. The ‘fact’ of ‘exodus’ due to the criminals who are Muslims is established firmly in the minds of its readers.

After this, the media reported the home minister talking about this exodus and his appreciation of the resolve of Adityanath who stopped it with his ‘no nonsense policy’ of dealing with the criminals. In these reports, the newspaper does not think it necessary to tell the reader that the basis of the home minister’s claim is dubious.

And then comes this advertisement. One can imagine what impression it would leave on the mind of the readers of the earlier published reports. Senior journalist Ajaz Ashraf aptly writes, “Editors will argue reports on speeches of leaders should be published without countering them. Tony Rosenstiel, former executive director of the American Press Institute, once said, “Something can be factually accurate and substantially untrue at the same time.” He cited an example: “If I quote Neo-Nazis saying a bunch of stuff that is technically accurate, but a total distortion of reality, then I’ve quoted them accurately telling their lies.”

The recent advertisement confusing criminals, terrorists and Muslims has to be read as part of this discourse. Ashraf helps us understand how it works: “Advertisements, legislative decisions and media are weaved together in the BJP’s poll strategy.”

The media has now become an unabashed partner of the BJP. It hardly matters that critiques of the regime also finds space on the edit and op-ed pages. Because a handful of critical op-eds can hardly compete with the enormity of the impact made by the combination of ‘objective’ reporting done on a routine basis – i.e. publishing the lies of BJP leaders unexamined – and bigoted advertisements.

We know that editors hardly have any say in deciding which ads are to be taken. But as an editor noted of his experience as a newspaper editor a decade ago, “..the ad dept would bring dubious page 1 ‘creatives’ to the editor to vet for suitability and there was hell to pay when they failed to do so.” We know that in most newspapers today, this is not the practice. The editors also see these dubious front page advertisements only after they are printed.

We know that money has no dharma, no conscience. To run a newspaper you need money. But this money is stained with the blood of Muslims. Of those hit by this politics and those who will be hit by it. The editors and patrons of newspapers , including their readers and writers, need to tell their proprietors they have to have some non-negotiables. In these times of brazen anti-Muslim violence, you cannot allow anything to pass which adds to fuel to the blazing fire.