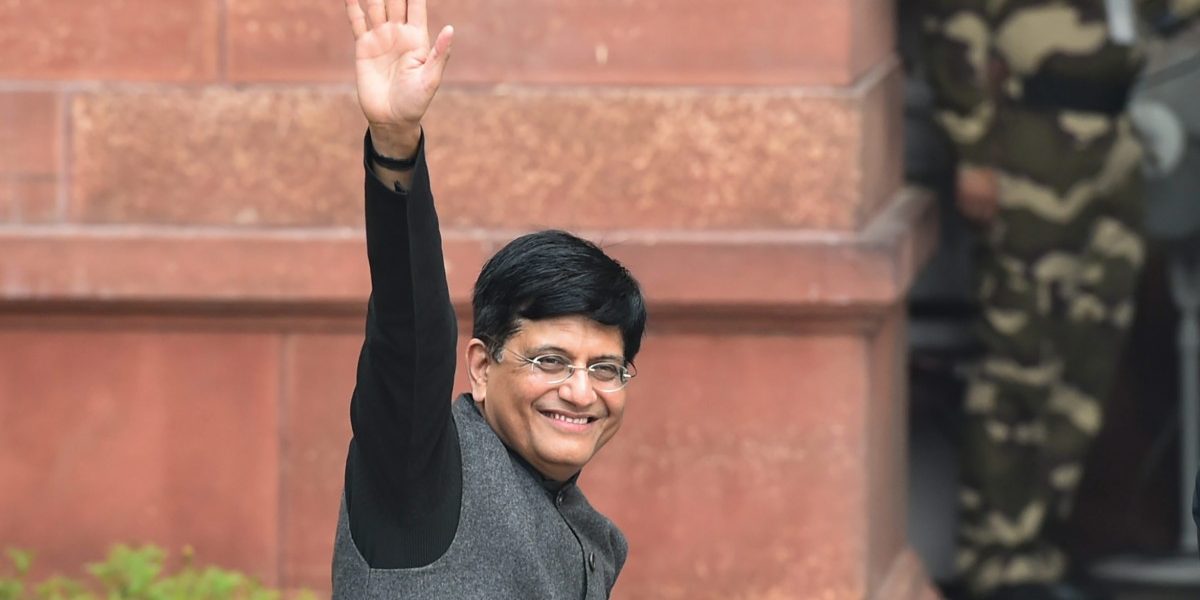 New Delhi: Finance minister Piyush Goyal presented the 2019 Budget in parliament on Friday. The Wire breaks down what was said.

“I propose to reduce the burden on taxpayers. Though as per convention, the main tax proposals will be presented in the main budget. Small taxpayers, middle-class and pensioners need certainty in their minds in beginning of year.”

Individual taxpayers having a taxable income up to Rs 5 lakh will get a full tax rebate, Goyal said. This effectively means that people who earn up to Rs 6.5 lakh per year will not need to pay income tax, he said. He was referring to the Section 80C deduction.

“There are a total of 42 crore workers in the unorganised sector in numerous industries. We must provide comprehensive social security coverage,” Goyal said.

In addition to health coverage under Ayushman Bharat and disability coverage under other programmes, the government will announce a mega pension Yojana, the ‘PM Shram Yogi Yojana’, the finance minister said.

This new scheme will be for organised sector workers with a monthly income up to Rs 15,000. They will receive an assured monthly pension of Rs 3,000 after they reach 60 years of age.

Unorganised sector workers will have to contributed Rs 100 per month till the age of 60, and then the government will contribute a matching share. An estimated 10 crore unorganised workers will benefit, Goyal said.

“Agriculture continues to be main driver of rural economy. In the past 4.5 years, pro-farmer policies have seen jump in commodity production,” said Goyal, building up to the announcement for a new income support scheme for farmers, ‘PM Kisan Sammaan Nidhi’.

The scheme will target vulnerable and small farmers, and Rs 6,000 per year (in three instalments) for farmers having less than 2 hectares will be transferred to their bank accounts.

The proposed scheme’s farm income support amount is less than both Telangana’s Rythu Bandhu – Rs 8,000 per year – and Odisha’s Kalia – Rs 10,000 per year.

In addition to this income support scheme, Goyal also announced an ease on interest subvention.

“All farmers affected by severe natural calamities will be provided benefit of interest subvention of 2% for the entire period the loan is restructured and if they repay on the rescheduled time then 3%.”

Goyal indicated that the fiscal deficit for this financial year would be 3.4%, a slippage of 10 basis points. It appears that markets had already factored this in accordingly. Analysts had expected the 3.3% target was not achievable and had projected a fiscal deficit of 3.5% or 3.6%.

Goyal said that the fiscal deficit target of 3.3% couldn’t be met because of the farmer income support scheme, which will cost Rs 20,000 crore in the current financial year.

What he left out, though, is that GST collections have also not been good. If they had, perhaps the fiscal deficit could have been contained. 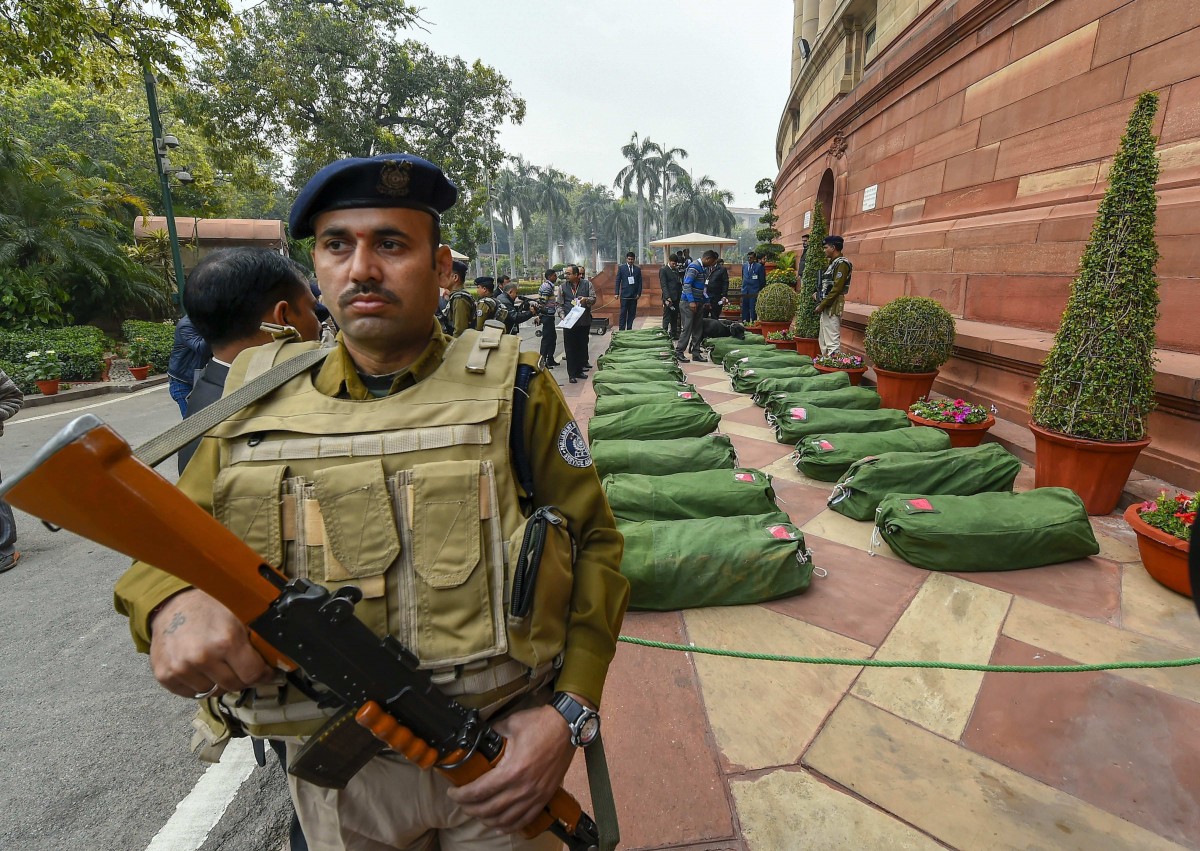 Bundles containing copies of the interim Budget 2019 outside the Lok Sabha on Friday. Credit: PTI

Number of returns filed increased by 80% to over six crore, said Goyal. “Let me assure that we have used their contribution to serve the poor. Income tax department now functions online and returns/assessments/funds are all undertaken online. Last year 99.54% of all returns were filed online.”

Coming to the meat of the matter, Goyal said that the government has done well in the past on the direct tax and income tax front. In order to promote less cash economy, the presumptive tax rate has been reduced from 8% to 6%.

All of Goyal’s mentions regarding income tax relief were in the past tense. He said that the government will lower GST for home-buyers, but this is something that can’t be announced now, as it will go through the tax council.

Infrastructure development is the backbone of our nation, said Goyal. “We have gone beyond incremental growth to attain transformative achievements. Anyone can fly on airplanes because of UDAN Yojana. Operational airports will soon cross the 100-mark. Domestic air traffic has doubled in last five years.”

Fact check: All true, but UDAN Yojana has been a mixed bag and the problem of ghost airports still continues. Also, the aviation industry is currently bleeding with Jet Airways and Air India leading the pack.

“People of the Northeast have received benefits of infrastructure. Meghalaya, Tripura and Mizoram have come on India’s railways map for the first time,” Goyal said.

Allocation for Northeast areas is proposed to be increased by over 20% to Rs 58,166 crore for FY’20.

Keep in mind: The Centre has indeed done well on infrastructure like roads and railways but has flopped on the digital front, as this recent report by The Wire‘s Sangeeta Barooah Pisharoty points out.

On the defence budget front, Goyal said that allocation would cross Rs 3 lakh crore for the first time in FY’20. This is good, but it is also important to remember it was just under Rs 3 lakh crore last year (Rs 2.95 lakh crore).

In addition to increased allocation for the Rashtriya Gokul Mission to Rs 750 crore for this year, Goyal announced the new Rashtriya Kamdhenu Yojana scheme, that will help cows.

NREGA: Goyal proposed a Budget allocation of Rs 60,000 crore for the National Rural Employment Guarantee Act in 2019-20. This is lower than last year’s revised estimate.

Roads: Goyal announced that the Pradhan Mantri Gram Sadak Yojana: has been allocated Rs 19,000 crore for FY’20 – this is nearly double what was there last year.

On women’s development, Goyal noted that the Modi government has a good track-record.

“In our election manifesto, we promised that we will transform quality of women in rural India by providing cleaner fuel. We delivered 8 crore free LPG connections. Ujjwala is a remarkable success story by a responsible and compassionate leadership. More than 70% beneficiaries of MUDRA are women.”

Goyal blazed through the macroeconomic indicators of the NDA-II government before he presented the Budget. These include lower inflation, higher foreign direct investment and a “wave of next-generation structural reforms”. Other achievements include new bankruptcy laws, tackling the non-performing asset crisis and new infrastructure projects.

“India is the fastest-growing economy in the world today,” finance minister Piyush Goyal said while paving the way for Budget 2019 announcements. Goyal noted that the Modi government has brought down both the current account deficit and fiscal deficit.

His opening was rather political, with Goyal pitching for the NDA coming back after the 2019 elections.

While Goyal’s remarks on economic growth are true, he failed to mention the debate over how the Modi government revised GDP numbers is still quite contentious, and also saw two members of the National Statistical Commission resigning earlier this week.

Goyal started his Budget speech on Friday by noting Arun Jaitley’s absence, and wishing him a speedy recovery. Jaitley, the former finance minister, is in New York for cancer treatment.

There was a cabinet meeting at 10 am, at the which the Budget was officially approved.

With just three months left before the 2019 Lok Sabha elections, this was the Narendra Modi government’s last attempt at reaching out to the middle-class, rural voters and distressed farmers.

In the month leading up to the budget, there was confusion over whether Budget 2019 would be a simple vote-on-account, a more nuanced interim budget or an attempt at making a full-flown budget.

Earlier this week, the Ministry of Finance clarified that it would be called the Interim Budget 2019, but that still leaves plenty of scope for large-scale announcements and promises.

Congress MP and leader of opposition Mallikarjun Kharge slammed the government before the Budget speech began, saying only “jumlas will come out today”.

Mallikarjun Kharge: They’ll try to introduce populist schemes in the Budget keeping an eye on Lok Sabha polls. Budgets they’ve presented so far haven’t really benefitted general public. Only ‘Jumlas’ will come out today. They’ve only 4 months when will they implement the schemes? pic.twitter.com/RtGEDw6OzV

This is a key point of all interim budgets. Whatever funding was announced today for different ministries and departments is only applicable for a few months. If the NDA comes back to power, they will have to introduce a full Budget in July where they could stick to their promises or also change it up.

Under the NDA-II government, the form and shape of the Budget has changed significantly.

In 2017, Arun Jaitley changed the day at which the budget was presented to February 1. This was to ensure that that the budget changes could be implemented by the start of the next financial year (April 1) but also a baby shift towards moving a calendar year type of functioning.

In 2016, the Modi government clubbed the railway budget with the general budget for the first time in 92 years.