China's policy from the 1980s onwards to undervalue its exchange rate compared to the dollar attracted American foreign investment, leaving India lagging behind. However, India can take lessons from the Chinese example to help it achieve its goal of $1 trillion exports. 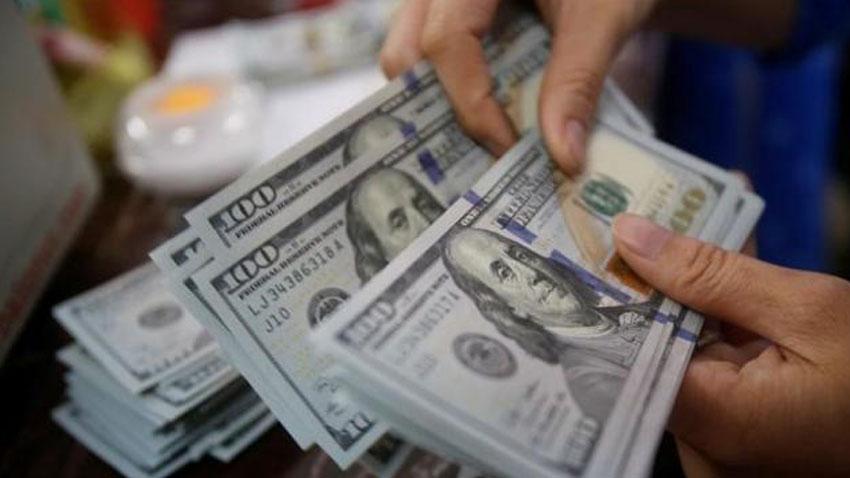 China's explosive growth since the 1980s left India in the just, but it isn't too late to bounce back yet. Photo: Reuters.

How did China outperform India? The answer is rather simple and obvious: China was willing to let foreign investors access its assets, labour and non-traded infrastructure at a significantly lower cost than its Indian competitor.

However, the proof of this proposition lies buried in the arcane world of asset prices, currencies and currency cross-rates, which many do not bother to study.

Back in the 1980s, India and China were just beginning to liberalise their economies after decades of frustration with leftist economic policies and the resulting autarchic isolation of their respective economies from world trade.

China was helped by the fact that it had been recruited, in secret, by the US to its camp in the late 70s in order to counter the Soviet Union. This deal included enhanced access for China to US markets for exports, acquisition of technology and US investment Dollars.

India under Indira Gandhi – and later Rajiv Gandhi – was slow to get off the mark because of the millstone of being in the Russian camp that still hung around our neck, despite efforts to improve ties with the US. It didn’t help that the Russians were then in Afghanistan, Pakistan was hosting the US-financed-and-armed Mujahideen to fight the Soviets there and that, under the US security umbrella, Pakistan was acquiring nukes. This put us at loggerheads with the US.

But even so, neither the Japanese nor the Americans are blind investors; Japan came looking for investment opportunities in India, as did the US. Why then did these investors choose China over India? To understand this, we have to look at asset prices.

Also read: ‘Nomadland’ Is a Glimpse Into Why China Is the US of Asia

Why does a foreign investor want to invest in your country?

Basically, the reason boils down to assets in the non-tradable part of your economy which cannot be accessed via normal trade. If an investor was looking for cotton, she could just import it. But if the asset she needs is land to grow cotton or to set up a mill to spin cotton or to weave cloth to make garments, she has to buy those assets in India and use them in India itself. Only the product can be taken out.

Labour is largely a non-traded part of your economy because of strict immigration laws. Therefore, access to your labour also invites foreign investment.

Any and every investment can be made attractive – and profitable – by lowering the price of the asset. If you have poor infrastructure or badly trained labour, it doesn’t really matter as long as you set a low enough price for such assets; the price of an asset alone determines your returns, the rest is a matter of investment in training and technical improvements to the underlying assets, which comes from the investment itself.

When there are two competing destinations for an investment, the currency and its price going forward often become key determinants of where the investment will go. From this perspective, we will look at the situation in India and China, as viewed by an US investor, in the period from 1980 to 2004/05. We will assume the assets she is contemplating buying in China and India are comparable.

What were the currency values, a proxy for relative asset prices, that the US investor was faced with? For this exercise, we will consider the period from 1980 to 2021, but specifically the years between 1981 and 2004, when most the FDI went to China, though a small part did come to India as well.

What we are concerned with here is the relative assets prices, to see where the investor would get a bigger bang for their buck: India or China? The table clearly reveals the Chinese currency strategy to outbid India on price.

Also read: The Big Fat IRCTC Fiasco and Why It’s Such a Huge Deal 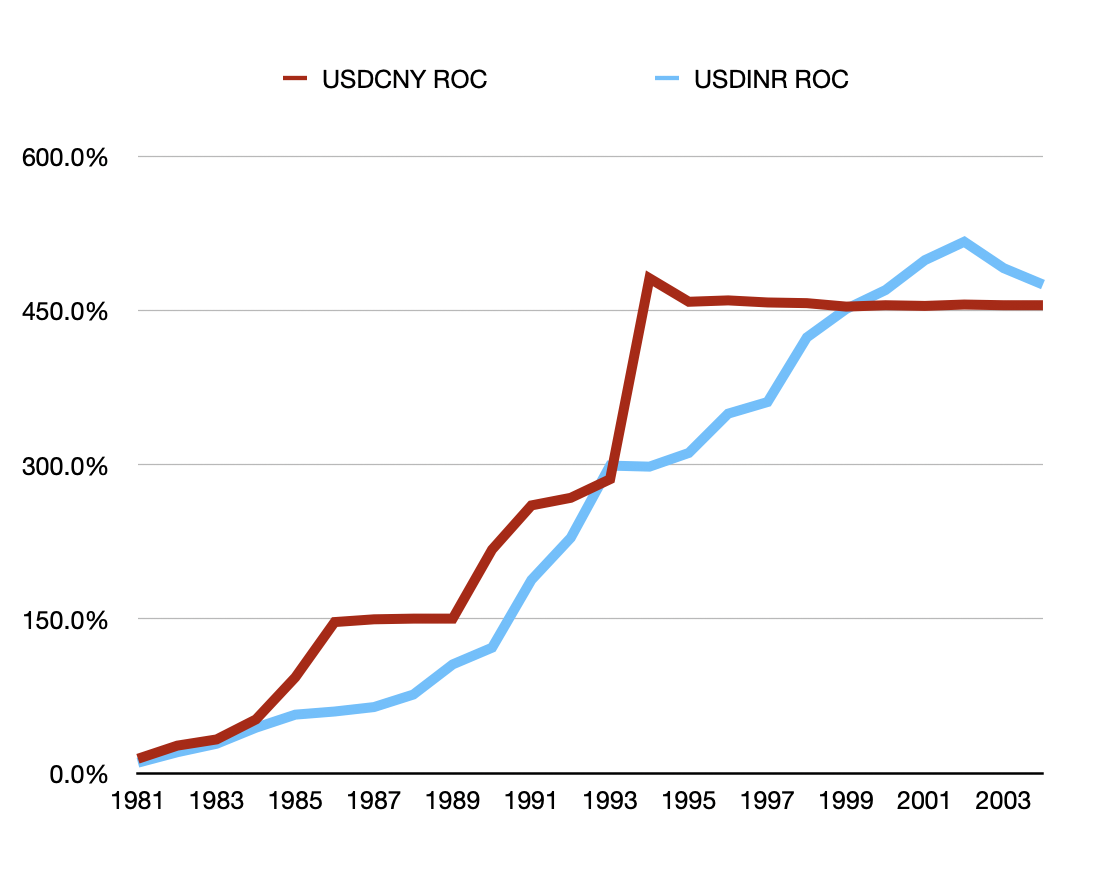 In order to keep both USDCNY (Dollar in Yuan) and USDINR (Dollar in INR) graphs in the same chart, I have shown the rate of change (ROC) of the respective currencies with respect to the Dollar. Note at every point from 1981 to 2000, the Yuan depreciated much faster against the Dollar than the INR. It was as though the Chinese were determined to keep their assets far cheaper than India, come what may. We will see the extent of the valuation difference caused, in later graphs. 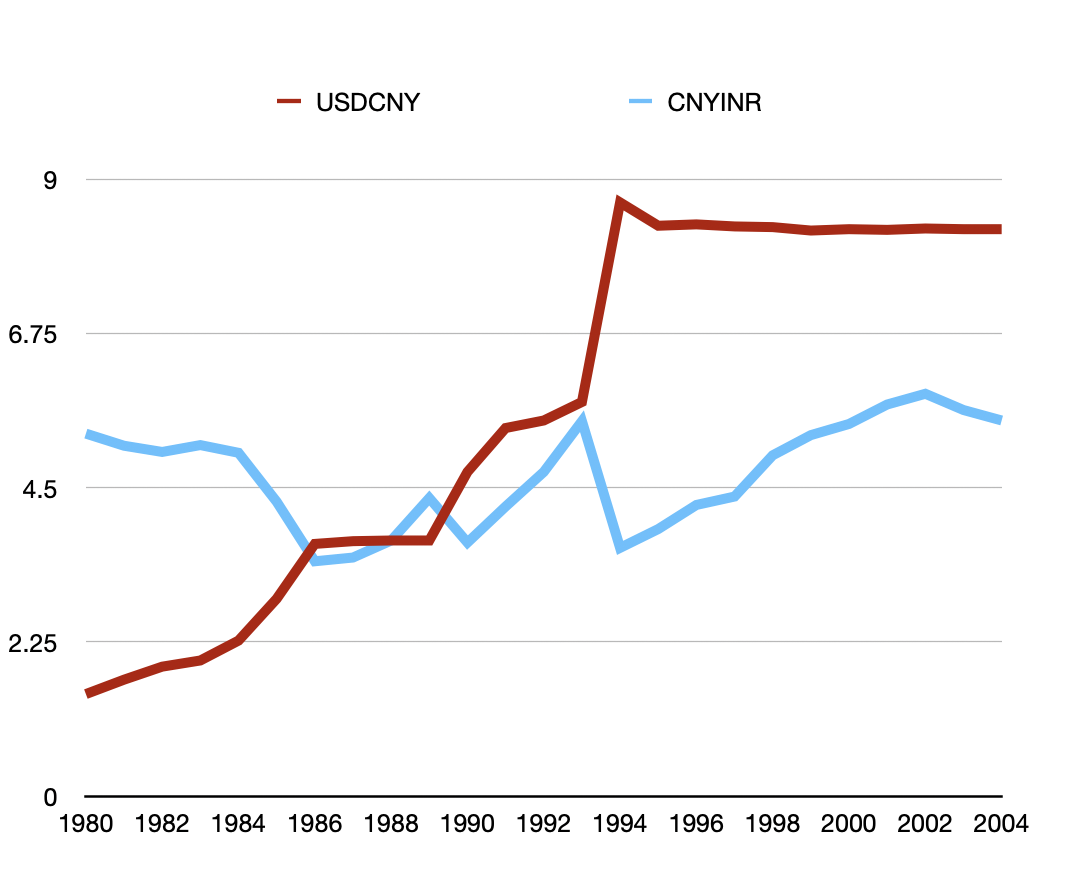 The second graph shows the value of CNYINR (Yuan in INR) plotted against USDCNY, during the same period. CNYINR is the cross-rate between USDCNY and USDINR.

In contrast, the INR today (since 2008, for which data is available) depreciates faster against the Yuan than it does against the Dollar. The Yuan is presently 11.7 INR compared to the 5.25 – 5.48 cross-rate between 1980 and 2004. The humongous over-valuation of the INR in that period, compared to the Yuan, made any FDI in India unthinkable, given the cheaper asset prices in China for US investors. To put it simply, China outbid us by a huge margin for investment from the US by depreciating its Yuan at a much faster rate than us.

How much was the INR over-valued and what effect did it have on relative asset prices? 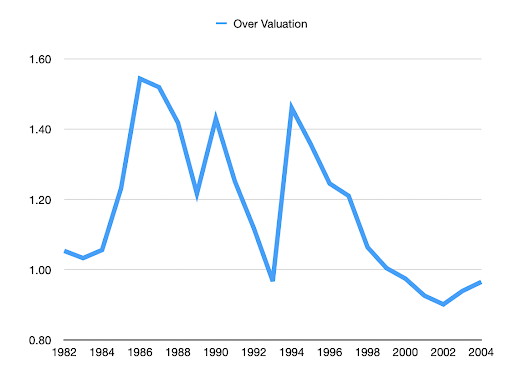 The over-valuation of the INR relative to the Yuan, both measured against the Dollar, went as high as 60% but generally stayed in the 30% – 40% range in the early 90s. This over-valuation caused asset prices in India to be as much as 15% – 30% higher than those of comparable assets in China. 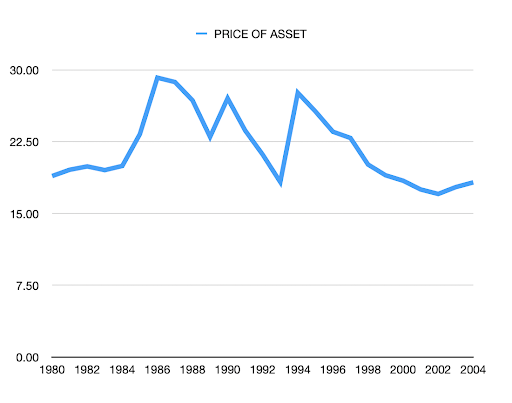 What happened to FDI in China compared to India during this period? The graphs below tell the story. 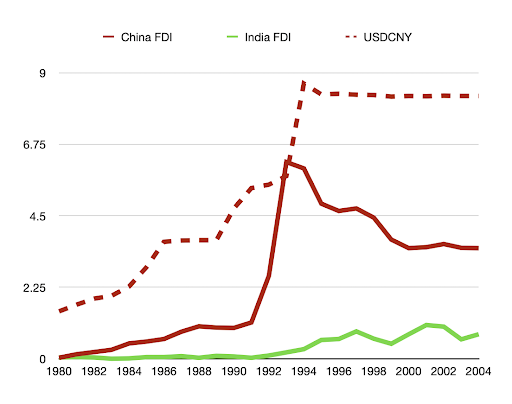 The dotted line shows the value of the Dollar in Yuan during the same period, point per point. The impact of the depreciation of the Yuan on the level of FDI attracted is obvious.

The green line hugging the X-Axis in the graph is the FDI in India in terms of percentage of GDP, in order to keep numbers comparable. FDI in India during the same period was between 0.04% of GDP and a maximum of 1.06% of GDP in 2001. That China attracted six times more FDI than India between 1981 and 2004, tells the whole story.

The point is this: If you want FDI, you must lower the price of the assets you offer to investors and you can only lower this price by adjusting the external value of your currency. You can treat this as a ‘grand sale’ of assets, opening up the economy for a limited period of time ( say, 10 years), where you lower the price of your currency and peg it to the Dollar plus Yuan, telling the world that your sale window is open for the said period.

The assets on sale are non-tradable, which means they don’t walk away abroad once you have sold them. Instead, they remain at home, add to the productivity of the economy and create jobs. Any thriving firm is always cash hungry and sucks in far more investment, as time goes by, than the cash that it takes out in dividends. Therefore, the country selling its assets in a ‘grand sale’, as China did, benefits far more than the idea of the ‘sale’ implies.

From 1981 to October, 1984, Indira Gandhi was in charge. She was tentatively looking at relaxing economic controls, but nothing much happened. She wasn’t even thinking of competing with China, while China was putting the building blocks of reforms in place. From 1984 to 1989, it was Rajiv Gandhi at the helm. He was liberal, but did little liberalisation except for allowing use of computers. He was followed by a clueless government until P.V. Narasimha Rao comes onto the scene, with Manmohan Singh as the finance minister, from 1991 – 1996.

The duo initiated reforms, depreciated the INR by over 50% between 1991 and 1993, – a huge amount – but see the chart of USDINR and USDCNY ROC and you will notice that even this was peanuts compared to what the Chinese were doing.

We caught up with the Chinese only in 1999, after Atal Bihari Vajpayee came in, not because he had any better sense but because the Chinese decided they had depreciated enough and held the Yuan at eight to the Dollar for several years. We trundled along with our faulty NEER/REER model, depreciating the INR against the USD by only 50% of the amount dictated by inflation differentials.

Some gora God had convinced us that we were making rapid productivity gains against the US – by as much as 1% a year – while our people were being rendered jobless, also by almost 1 percentage point a year, compared to the US and other trading partners. 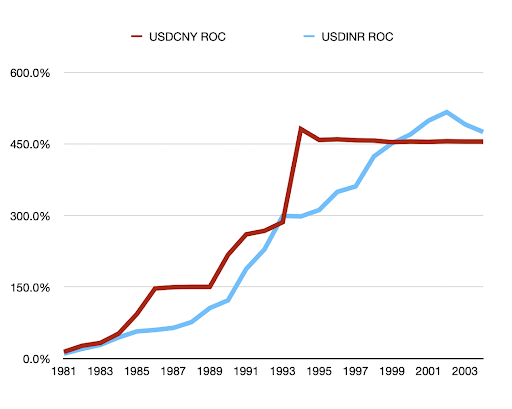 What does this brief study tell us?

If we want to double exports from $450 billion to $1 trillion, as Modi says he wants, then we need something like $250 billion of FDI annually over next ten years. Currently, we get a net FDI of about $50 billion. To get that, we must have a Chinese-style ‘grand sale’ of our non-traded assets in the economy by lowering the value of the INR and holding it there for the next ten years.

This can happen only if we first strike a deal with the US, based on relative employment levels (they are at 70% employment, we are at less than 40%), that will lower the value of the INR by whatever is needed for ten years but will also remove all tariffs on imports and let the US balance its trade with us. This should make the US happy and we can take this trade deal to the Regional Comprehensive Economic Partnership (RCEP) and do something similar.

Both these steps have the potential to multiply FDI in India, start to double our exports and take the alpha GDP growth from the present 4 – 5% p.a. into the 8 – 10% p.a. range.

Our earlier experiments with exchange rate adjustments did not yield lasting results because we failed to sustain the lower rate. This time, we should institute partial capital controls, if necessary, to lock out speculative inflows of capital via the FPI route. Since this will be for a limited period and we needn’t restrict outflows, the partial controls will not be disruptive.

All this is not rocket science but straightforward economics. I do not really understand why our elites are willing to see 60% of our labour lay idle when others have 70% of their labour force fully employed. Even Bangladesh and Pakistan have not only caught up with us on the employment front but have now beat us comfortably. If our neighbours can do it, why can’t we?