ATMs Dry: Too Many Withdrawals, Too Little Cash or Not Enough Circulation? A woman cleans an ATM which is out of service in Mumbai, India, November 11, 2016. Credit: Reuters/Danish Siddiqui/Files

New Delhi: There are three broad theories as to why cash crunches have hit various parts of the country over the last few weeks.

The first – the line of argument that the Narendra Modi government and the Reserve Bank of India aren’t saying much about – is whether there is an actual shortfall of cash or currency. And if so, what is the scale of the shortfall?

It’s clear that in the last two years, growth in currency in circulation (CIC) hasn’t kept up with the growth in nominal GDP.

However, in the last two financial years (2016-2018), the two have sharply disconnected. While CIC went up by a little over 10%, nominal GDP was up by over 20% during the same period. This discrepancy is largely due to demonetisation, which resulted in both higher bank deposits for a year and an increase in digital transactions.

Now the real question is, how big of a currency shortfall does this translate into?

There are a number of estimates being thrown around. Former RBI deputy governor R. Gandhi has stated that India should have a CIC of around Rs 23 lakh crore (it’s currently at a little over Rs 18 lakh crore). This appears to be at the higher end, though.

More conservative estimates, including one by State Bank of India chief economist Soumya Kanti Ghosh, state that currency with the public should have been anywhere between Rs 19.4-20 lakh crore by March 2018. This is a gap of roughly Rs 1.5 lakh crore to Rs 1.9 lakh crore.

Not all of this is a shortfall in cash; an increased shift to digital transactions and financial savings compensates for some of the gap. Ghosh, in a report released on Wednesday afternoon, notes that the actual shortfall could be around Rs 70,000 crore.

This Rs 70,000 crore figure ties neatly into a recent statement by senior finance ministry official Subhash Chandra Garg, who noted they were raising the production of Rs 500 notes to about Rs 2,500 crore worth of Rs 500 notes per day. “In a month, supply would be about Rs 70,000-Rs 75,000 crore,” Garg said.

When there is a shortfall, it is likely that swings in demand could set off a cash crunch. Which brings us to our next point.

Are people withdrawing cash in amounts that are alarming?

The second rationale for the cash crunch – which is also the official line taken by the Centre and senior government officials – is that there has been sudden and unusual demand for cash and that withdrawals have been higher in certain states.

There are two bits of public information that back up this theory. One, a stock-analysis by the RBI (reported by Business Standard) shows that in eight states, the rates of withdrawals have been higher than normal and higher relative to the rates of deposits. Unfortunately, this comes with no specific numbers, nor have the details of the RBI’s analysis been published yet.

The second is remarks made by principal economic adviser Sanjeev Sanyal and finance ministry official Subhash Chandra Garg. They pointed out that in the first two weeks of April 2018, over Rs 45,000 crore had been withdrawn from India’s ATMs.

The only problem is that this isn’t a particularly alarming figure: on average, Indians withdraw anywhere between Rs 2 lakh crore and Rs 2.4 lakh crore from ATMs every month.

When taking that into account, Rs 45,000 crore withdrawn in the first two weeks of April seems about right.

What we do know is that in the second half (H2) of FY’ 2017-2018, ATM withdrawal through debit cards showed a higher increase (12.2%) when compared to the first half of the financial year. While cash withdrawals are higher in the second half of any year when compared to the first half, the rate of growth seen in H2 of FY’ 2017-2018 is higher than what was seen in FY’16 or FY’15 or even a five-year average, according to SBI’s Ghosh.

Other bank economists flagged this trend as well. Axis Bank chief economist noted that there had been a “sharp rise in cash” particularly in December-January 2018.

“Analysts, for a while, had spotted a sharp rise in cash, particularly in December – January ’18, a puzzling phenomenon, largely unexplained beyond the standard suspects – elections, kharif crop marketing, etc…This trend seems to have persisted in the first 2 weeks of FY19,” wrote Saugato Bhattacharya, chief economist at Axis Bank, in a note this week.

In conclusion, while higher cash withdrawals could have played a factor (especially in certain states like Andhra Pradesh, Karnataka or Bihar) in the cash crunch, it’s more likely that logistical and cash mismanagement issues, as reported by The Wire earlier this week, played a bigger role.

Another closely related factor here is the RBI’s decision in November 2017 to cut its new currency note printing order due to a lack of space in currency chests at the central bank and commercial banks. The space in the chests was being taken up by demonetised Rs 500 and Rs 1,000 notes.

This appears to be a mistake in hindsight, also aggravated perhaps by reports of printing ink not being available at the Nashik printing press.

The last explanation for the cash crunch is a factor that exacerbates the first two laid out above.  Multiple news reports, quoting anonymous government officials, have expressed fears over higher-value bank notes, in particular the Rs 2,000 note, being hoarded by people and not adequately circulating within the Indian economy.

On Wednesday, economic affairs secretary Subhash Chandra Garg hinted that Rs 2,000 notes were not returning to the banking system. “You can assume this is one note that is most suitable to hoard,” he told reporters.

While the government hasn’t put out official data on this, an SBI research report on Wednesday points out that “income velocity (of currency with public) has been on a declining trend in FY’18”.

“This indicates money is not getting adequately circulated in the economy. Though the State-wise/Region wise income velocity is hard to determine, yet our internal estimates suggest that in the States like Bihar, Gujarat and Southern States, the income velocity is far less than the national average,” Ghosh says in the report. 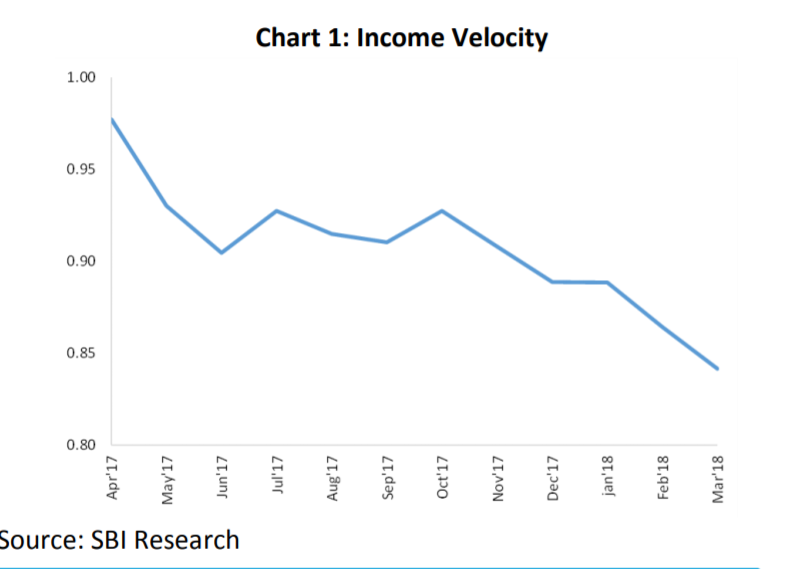 This reduced income velocity could have also spread to other states through a domino effect, the report notes. What reason could people have to hoard the Rs 2,000 note? Legitimate justifications include the Rs 2,000 note not having enough liquidity or people succumbing to admittedly overblown fears of a failure in the banking system.

Reasons that the government should worry about, and which deserve investigation, include the use of the Rs 2,000 note for illegitimate purposes or as a vector for black money-based transactions.