‘Murder of Our Rights’: Activists Urge President Kovind Not to Sign Trans Bill

The LGBTQIA+ community has been protesting against the bill for months now, saying it will only further marginalise trans people. 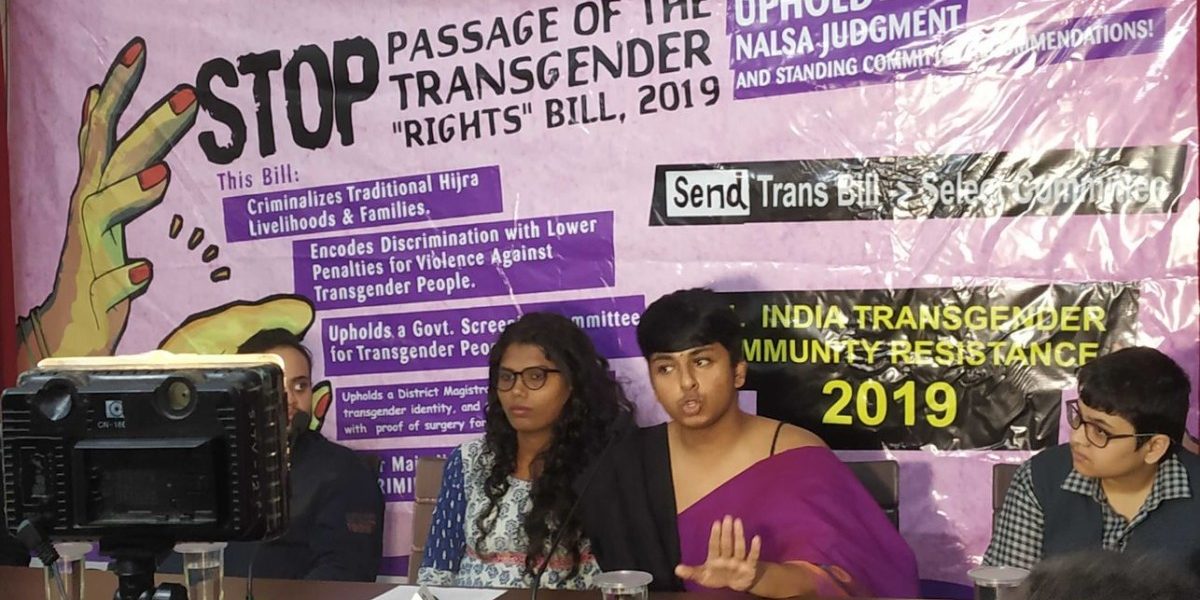 New Delhi: A day after the Rajya Sabha passed the Transgender Persons (Protection of Rights) Bill, 2019, community representatives held a press conference at the Indian Women’s Press Corps to highlight their issues with the Bill, reiterating that it only serves to push the community further to the margins and reduce trans people to “mere bodies”.

The LGBTQIA+ community has been protesting against the Bill at Jantar Mantar since November 20 – the day it was tabled in the Rajya Sabha. Despite opposition from several MPs including Tiruchi Siva, Rajeev Gowda and Derek O’ Brien, the parliamentary motion to send the Bill to a select committee was turned down.

At the afternoon press conference, activists said that they have appealed to President Ram Nath Kovind to send the Bill to a select committee for re-consideration. The Bill, they say, is only a small component of the different kinds of legal injustice inflicted upon trans people for years.

Many trans people also outlined the problems with the anti-trafficking Bill, National Register of Citizens, passport regulations and other documentation processes as well.

Hence, they are demanding a comprehensive anti-atrocities, anti-discrimination legislation that ensures equal access to all civil rights – employment, education, housing and medical care.

“The Bill is the murder of our rights. The fight has just begun,” Grace Banu, a Dalit and trans rights activist, said.

The Bill, according to the activists, takes away the right to self determination as it mandates stripping in front of a district magistrate or the screening committee to be assigned a gender. This is a complete violation of a right to life and dignity, and it also devalues the 2014 NALSA judgement which declared ‘transgender’ as a third gender.

“They have assumed that we don’t have the basic ability to understand ourselves. More so, the belief that a transgender person has to necessarily opt for a surgery is also wrong. As a transgender person, if I choose not to go for a surgery, I have the right to do so. According to the NALSA judgment, I have the right to change my gender as male, female or trans,” said Shume Banerjee, a lawyer and a Teach for India fellow.

“In India, most of the positions in government organisations are held by cis people. Will they tell us who we are? What if we don’t clear their test, will I not be called a trans person then?” she said.

These assumptions, as trans rights activist Vqueeram Aditya Sahi pointed out, stem from the idea of reducing the community to mere subjects controlled by the district magistrate and the doctors.

Moreover, the medical industry, according to Sahai, has been trying to control trans lives for a very long time. And now the Bill will empower the industry with greater power as it necessitates sex re-assignment surgery. “It reduces a person to a flesh. We become pornotropes for the medical industry,” Sahi added.

The Bill, they say, is an indirect attempt to push the community into the conventional family system. According to the Bill, a transgender person can change their first name but there are no provisions for changing their second name.

“This is absurd. We can also change our second name. This, I believe, is an indirect way to check our lineage, our caste and religion,” said Vihan, who works for a not-for-profit organisation.

In the same vein, the Bill, the community says, forces them to stay with their birth family, even though transgender person often face a lot of abuse at home.

Besides, the Bill also has no provisions for reservation in the education and employment sectors and it recommends measures for “rehabilitation” for the transgender community – which the community has categorically rejected.