The bill, which directly contradicts the landmark NALSA judgment, reflects a basic lack of understanding of the complexity of gender in India. 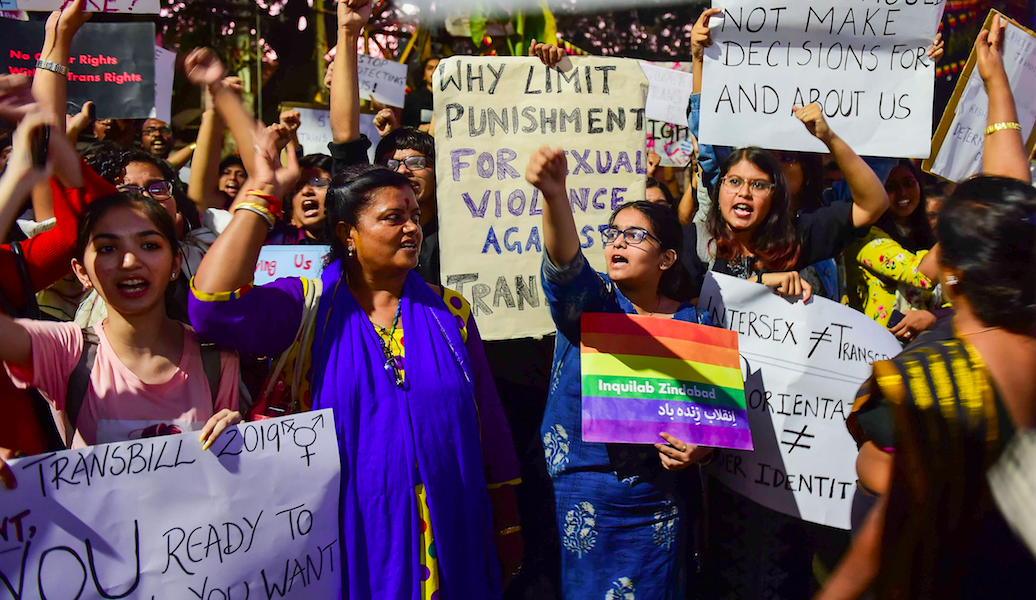 Protestors raise slogans in Bengaluru against the central government over the passage of the transgender bill, on November 27. Photo: PTI

This was met with a wave of protests by transgender rights advocates across India, because this bill does the polar opposite of what it claims to do – protect the rights of trans people.

Many commentators and journalists, including myself, have written about the specific provisions of the bill that make it so antithetical to the protection of the rights of trans people.

They stand in direct violation of the basic tenets of the landmark Supreme Court judgment passed in 2014 (colloquially called the NALSA judgment) that acknowledged the fundamental rights of transgender people in India.

These issues apply to virtually every aspect of a trans person’s life – from their very identity to their families and relationships, to key areas of life such as education, employment, access to healthcare and protection from violence.

A press release by trans, gender non-conforming (GNC) and intersex rights advocates who protested at Jantar Mantar in Delhi summarises these issues:

“1. This Bill upholds the humiliating process of submitting an application to District Magistrate for a legal recognition of one’s transgender identity, and it makes getting an ID as male or female dependent on first registering as transgender, and then supplying proof of surgery. This contradicts the NALSA judgment of the Supreme Court.

3. The Trans Bill 2019 denied reservations and affirmative action for trans, intersex and gender nonconforming people in employment, education, and healthcare. Its provisions around discrimination have no penalties whatsoever, making their need completely redundant. Thus between not preventing discrimination and failing to provide any affirmative action on reservations, it puts our very lives and livelihoods at stake.

4. The Bill requires Transgender people to reside with their birth family – even though birth families are often the first site of violence against these individuals, or approach the courts to live in a shelter home. Measures for ‘rehabilitation’ are recommended in the bill. This violates our fundamental constitutional rights of free movement.

5. A comprehensive anti-atrocities, anti discrimination legislation, that upholds and ensures equal access to all civil rights and spaces of housing, employment, education and medical care for transgender persons is necessary, not this watered down and dangerous piece of legislation.”

Now that the bill is passed by both houses of Parliament, it rests with the President of India.

“Don’t sign that regressive, poisonous bill,” says Grace Banu, a trans rights activist based in Chennai. “This is what I want to tell the President. Please send it back to the Parliament. If you pass it, it will kill people.”

The history of the passing of this bill is a painful one, given that the impetus for its creation arises from a Supreme Court judgment that attempted to grasp the complexity of how gender plays out in India.

A key aspect of the NALSA judgment is that it recognises the right to the self-identification of gender.

This divorces the idea of one’s gender from the idea of an officially assigned identity. Implemented correctly, it would mean that this would liberate trans and gender non-conforming Indians to escape medical surveillance and invasive procedures such as hormones, or surgery which many may not want or be able to afford. A press conference against the Bill. Photo: LiveWire

But instead of upholding this fundamental right, the bill creates a situation in which trans identities are subjected to even more policing and surveillance than before.

Ray, a trans woman pursuing an LLB from Delhi University says, “This bill reduces us to our bodies. Our gender isn’t our genitalia – it is in our very being. And this bill is not trying to move its understanding of gender to who we are.”

Perhaps this is at the very crux of the dissonance between the expansiveness of the NALSA judgment and the narrow, ugly way the bill has been framed. Ray says, “The bill reflects no real understanding of [the diversity of] gender identity. It only understand trans people as a third category, outside of ‘men’ and ‘women.’”

The bill reflects a lack of basic awareness about trans lives and identities, and hold a key to understanding why such a progressive judgment as the NALSA was essentially made toothless in the hands of lawmakers who simply don’t understand or care about what they’re doing.

“When it comes to the rights of minority groups, people who don’t have any insight into the lived experiences of these groups think they know best. It’s a saviour complex. It makes them feel better about themselves, because they think they are doing something great by providing the bare minimum,” says Sasha Ranganath, a 19-year-old trans non-binary student.

The right to self-determination is directly contravened by the creation of a “district screening committee” to scrutinise the gender identity of those who exist outside the gender binary. “We already have this committee in Tamil Nadu. It is completely unconstitutional. The government of India is committing human rights violations against us. India is not a safe country for the trans community. This is the shame of India,” says Grace Banu.

Another glaring problem with the bill is the lack of affirmative action for a community that already struggles with access to basic human rights, and justice.

“When the question of reservations for trans people came up, Minister [of Social Justice and Empowerment] Thawar Chand Gehlot immediately said these won’t be given to us. I want to ask, why? Why can’t they give us our basic rights?” says Banu.

Efforts by trans rights groups all over India have been amped up ever since, with activists drafting detailed responses to the government’s successive versions of the bill, holding press conferences and protests, and sharing what amounts to tonnes of information to the government so that it may course correct. With the passing of the bill in the Rajya Sabha, all of this effort has essentially been ignored.

“Specifically for the issue of the trans bill, nobody from the trans community was approached and asked about our needs and demands. They have made decisions by themselves, based on their stereotypical assumptions. All we are asking for is the right to self identify, concrete protection against being harassed and discriminated against, the right to live the way we want and where we want, and pursue the profession we want, and get access to education. We need good healthcare and doctors who are sensitised about trans identities. We are just asking for the necessities to survive. And they didn’t listen. They got it horrifically wrong,” says Ranganath.

Activists have not backed down and it is clear that they will not accept this bill. “We want reservation, and we want our rights,” says Banu. “That’s it. And we will definitely keep fighting against this decision.”

Ray echoes Banu’s sentiments. “The government is not thinking about choice, agency or self-identification. This bill gives us tokenistic rights, not actual rights. Where is the mention of housing rights in this bill? What is even the definition of discrimination in this bill?” she says. “NALSA was only one step in the 100 mile journey to take our rights back, to ensure that we have rights at all.” 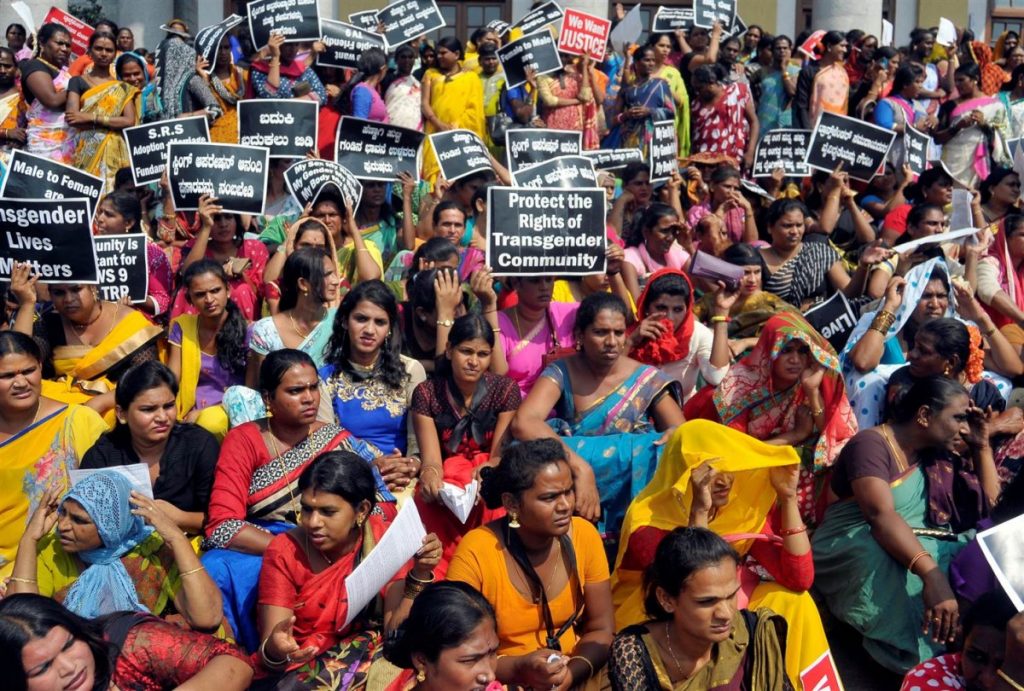 Activists and members of the transgender community now bank on the President exercising his rights and withholding his signature to the Bill. Photo: Reuters

“Remember that the people affected by this Bill are real human beings. We too, need to survive, and are deserving of good lives. Someone who doesn’t care for or respect us, or is not even willing to listen to us does not get to make decisions for and about it,” says Ranganath.

“The priority of the government should be to protect its people, and not to harass us because we don’t ascribe to ‘the norm.’ There is more than one way of being human, and it’s time people understand that without hatred,” they add.

Civil society organisations are supporting the trans, GNC and intersex community in its fight against the bill. Jhatkaa.org, a human rights campaigning organisation, has a petition to support the community’s demands regarding the bill.

“We must avail of all the democratic processes that have been granted to us by the Constitution to stop this bill. The President’s signature can make or break this Bill. That’s why we have a petition asking him not to sign, but to send it back to Parliament for redrafting in consultation with the trans community. We also have a petition to the UN India Resident Coordinator to make a public statement condemning the Bill, and ask for consultations with the trans community,” says Jyotsna Sara George, gender and sexuality campaigns manager, Jhatkaa.org.

In a statement, the People’s Union for Democratic Rights has said:

“PUDR vehemently opposes the passage of the Transgender Persons (Protection of Rights) Bill, 2019 which dilutes the rights and protection recognized by NALSA, and furthers injustice and violence against trans and gender non-conforming persons. PUDR demands that:

Lastly, the community is looking towards its allies during this time. “We are part of lots of movements, and we are part of anti-caste and feminist groups. But when something happens to us, very few people from the cis community give us solidarity,” says Banu. “We are fighting for our freedom and liberation, and we need support.”

“When people heard about the Section 377 verdict, there were millions of people talking about it, posting images with #LoveIsLove, including celebrities. Corporates changed their profile pictures. There was so much celebration over this,” says Ranganath.

But when it comes to the rights of trans people, the same progressive attitude vanishes, they add.

“Thousands of people show up to the Pride marches across the country and hardly 100-200 people come for protests against the Trans Bill. When the world needs our support, we are there at the front line. But when the trans community needs help to literally save our lives, suddenly they don’t want to look in our direction.”