Not only is the community unable to meet the feedback deadline due to the lockdown, trans activists say the rules being framed violate the Act itself. 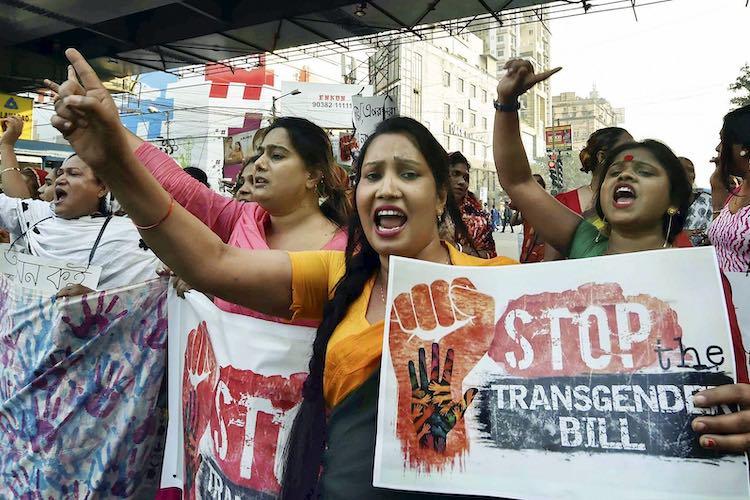 File photo of a protest against the trans Bill. Photo: PTI

Hyderabad: With the lockdown for the novel coronavirus making travel nearly impossible, the Central government has sought feedback on the rules it has framed to implement The Transgender Persons (Protection Of Rights) Act, 2019.

Aside from the fact that trans people are unable to meet and discuss the Act for comprehensive feedback, a group of trans activists has said that the rules being framed violate the provisions of the Act itself.

This group points out that after the government published the rules on April 18, it sought responses by April 30 when Lockdown 2 was in force. The deadline for responses was then extended to May 18. Since Lockdown 3, which continued to restrict movement, was to end only on May 17, the activists found this unacceptable. They have now written to the Ministry of Social Justice and Empowerment, listing their objections.

“The attempt by the government to unveil new rules now is not acceptable,” says Bittu, assistant professor of biology and psychology at Ashoka University. “The trans community is struggling for basic survival at this time and there is an urgent need to provide social security, food security and accessible healthcare, both general healthcare and trans specific healthcare. Given restrictions on movement, the objections we raised in our letter to the government are not comprehensive because we have only been able to consult transgender people with internet access to the government’s rules, which are provided only in the English language.”

The Trans Act 2019 was supposed to be the culmination of the community’s long drawn efforts to get legal sanction for its rights via parliament. But trans activists say the Act has actually removed many of the gains the community had achieved in the NALSA (National Legal Services Authority) judgment in 2014. “We have challenged the constitutionality of the Trans Act 2019 in the supreme court (SC). But the government is bent on framing and formalising rules for its implementation in the midst of the lockdown. So can the rule-making process even proceed, pending a challenge to the very constitutionality of the Act?” asks Meera Sanghamitra, trans rights activist and convener of the National Alliance of People’s Movements in Telangana.

When it delivered its judgment in the NALSA Vs Union of India case in 2014, the Supreme Court bench had called for legislation to safeguard the rights of transgender persons. The bench said: “Non-recognition of the identity of Hijras/Transgenders in the various legislations denies them equal protection of law and they face wide-spread discrimination.”

The 2019 Act gives the district magistrate (DM) the power to recognise a person as trans, while the NALSA judgment allowed self identification of gender. The NALSA judgment had further said that any insistence on SRS (sex reconstruction surgery) was immoral and illegal. It stressed that self-determination of gender is integral to one’s personality and dignity. However, the 2019 Act specifies that to identify as male or as female, one must supply proof of surgery to the magistrate. Activists say this gives immense power to the DM, leading to the possibility of arbitrariness and misuse.

The 2019 Act also institutionalises legal discrimination by making punishment for sexual abuse against transgenders imprisonment of “not less than six months but which may extend to two years and with fine.” This is much less than the punishment for rape against women under the Indian Penal Code (IPC), which is imprisonment of “not less than seven years but which may be for life or for a term which may extend to ten years and shall also be liable for fine.”

Furthermore, the 2019 Act which was purportedly enacted to eliminate discrimination against transgender persons by other persons or establishments does not even prescribe a punishment for discrimination. It states that if the immediate family is unable to care for a transgender person, the person could be placed in a rehabilitation centre after an order from a competent court. This violates Article 21 of the constitution, which guarantees the right to life and dignity. The 2019 Act fails to recognise that transgender persons are capable of making their own decisions.

The Act also violates the NALSA judgment by failing to provide reservations in admissions to educational institutions and public appointments by treating the transgender community as socially and educationally backward classes of citizens. Fervent appeals to send the draft Bill to a select committee were brushed aside and the Trans Act was passed in 2019 on the day Article 370 was repealed. The Rajya Sabha had only half of its members in attendance when the Trans Act was passed.

Rules are beyond the scope of the Act

Its rules, say activists, are beyond the scope of the Act. The rules empower the DM to reject an application for a trans certificate and also criminalises what the Act calls ‘false claims.’

“By giving arbitrary power to the DM to reject the application, the 2019 Act violates the NALSA judgment. The time limit for the appeals process is also limited. A person can apply to the DM for a Trans certificate and the DM must grant or reject the application within 60 days. Based on this certificate, starting from the day a trans person applies to the DM for a certificate in the male/female binary supported with a surgery certificate from a medical superintendent, the DM must grant the second certificate within 15 days. We want the time limit to come down and a fixed deadline set,” says Bittu.

The rules further violate the NALSA judgment by making SRS mandatory. The form prescribed by the Act has only one column headed ‘transgender,’ thereby failing to recognise culture specific multiple gender identities.

Also read: Coronavirus Has Compounded the Ostracisation of LGBTQ Community

“In fact Section 4 (2) of the Act recognises the right to self-identified gender, but the rules constrain the gender and thereby violate the act itself,” says Bittu. “It is bizarre for the government itself to fill in the answer to the one question they are asking of us – what do we want to identify as? In which other government have you seen the government ask a question and answer it itself? The Act upholds this right only in the definition portion, but not in the section where ‘recognition of identity by State is mandated.’”

The rules say that even for self-identification as a transgender person, you need psychologist’s certificate. This violates the 2019 Act itself. The NALSA judgment had stressed that self-identification is enough and rights should flow from it. This has been held as part of the right to equality. But the rules of the 2019 Act, particularly from Section 2 to section 9, only focus on identity and an exclusionary process around it.

Only one section is devoted to welfare, but there is no list of specific ways in which welfare benefits must be provided and no word about reservations and other form of benefits. The rules only hover around the identity question, not the welfare issues that follow. According to trans activists, the Act is a mere bureaucratic exercise which has destroyed the spirit of the NALSA judgment.

Clause 8 of the rules says the DM shall inform the applicant if the application has been rejected, but there is no time limit. Clause 9, which talks of the right to appeal, does not say who is the appellate authority and in how many days the appeal should be closed.

“The application seeks too many intrusive details like where we stay. It looks like the product of a colonial hangover, giving the bureaucracy too much power over human life,” says Meera. “The insistence on getting an SRS certificate from the medical superintendent of the hospital is unjustified. Many trans persons have undergone surgeries years ago and SRS is not a monolithic, single surgery. The rules leave many things unclear, such as the status and rights of trans persons who have already undergone surgery years ago and may not be able to produce documentation at this stage.”

The activists also object to the rules about penal action against transgender persons who make ‘false claims.’ “Our fundamental demand is a law to protect transgender people. Why is a provision like that necessary?” asks Meera. “The general penal law of this country (the IPC) already has such provisions. A large number of trans people are illiterate and unlettered. There is a likelihood of confusion and errors. To say such mistakes could lead to penal action is deeply problematic and against the spirit of NALSA.”

The activist groups recognise that they do not represent the entire community at this time. Many voices among transgender persons have not been heard because of the restrictions on movement during the various lockdowns. They have thus also sought to halt the process of feedback while the case remains pendant in the Supreme Court till such time as the entire community is able to meet in groups and discuss the Act.