No Jobs, No Family Support, No Status in the Eyes of Law: How Queer Couples Live in 2021

With little by way of legal framework to protect them, many couples have had no options other than to live on the run and ask friends for help. 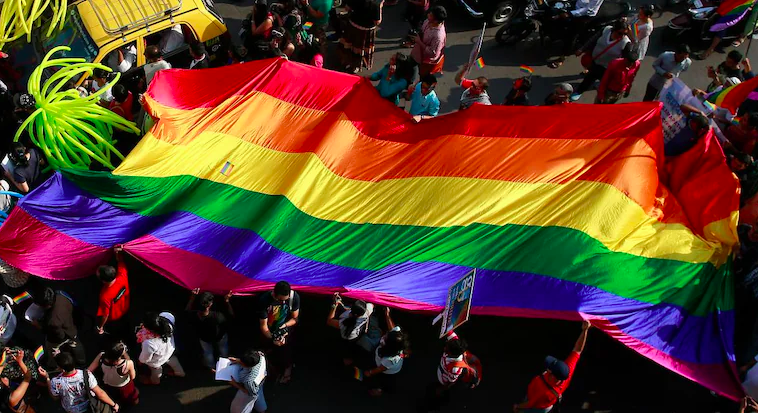 Representative image of a pride march in India. Photo: Reuters

Kolkata: Shonali* is frustrated with spending her days cooped up in a small room with only a bed. But she has no other option.

It was at school that Shonali, a cis woman, met Agnes*, a trans man, and their relationship slowly blossomed. Last year, at 21, Shonali revealed her feelings for Agnes, 24, to her family. She was physically abused, put under house arrest and pressured into an engagement with another man.

They hail from rural Behrampur in West Bengal, where Agnes’s gender identity is accepted neither by family nor by society.

To escape the backlash, they ran away to Kolkata, at the peak of the coronavirus pandemic. Lacking funds, they sought out another cis-trans couple they knew through Facebook.

Diya*, 25, and Diwan*, 24, both from Kolkata, had faced a similar situation in 2019. “When we left home that night, we did not think about where we will go, how we will sustain ourselves. It all happened so suddenly,” says Diya.

They spent the night on the roadside. At daybreak, they called friends for help. They moved several times, unwilling to burden their friends’ families with prolonged stays.

In the end, they were welcomed at Amra Odbhut, a cafe and community center in south Kolkata run by and for queer people.

Artist Upasana Agarwal, who started the cafe with friends, says it has become a space that offers immediate practical support, “for queer folks facing displacement or additional trauma during the pandemic, like their family homes becoming unsafe for them. It’s our responsibility to support them.”

Shonali and Agnes, too, stayed there for a few days.

Through activist and former member of the West Bengal Transgender Development Board, Ranjita Sinha, both couples learned that Wow Momo, a fast-food restaurant chain, was hiring trans men. Diwan interviewed successfully. Soon, he and Diya were able to rent a room for themselves. But the pandemic meant that Diwan’s salary was halved, and he had to leave for a better-paying job at a bakery.

For Agnes, the job did not work out and the couple had to move to suburban Barasat where rents are cheaper.

Both couples were supported by the LGBTQ+ community. Some offered them with temporary places to stay, others gave cash.

One of those organisations is Sappho for Equality, which has been working for lesbian, bisexual women and trans men since 1999. The organisation has been providing rations since last July to ensure people have a roof over their heads with basic sustenance until they find a job.

“Organisations like ours have to stand by the community when they need us the most,” says Koyel Ghosh, managing trustee.

“During the pandemic, we realised how vulnerable the gender and sexual minority community was. They lost their jobs. They couldn’t pay their monthly rent. To top that all, there was no support from the government and no protection for trans masculine people. The vulnerability was extremely high and is still high,” she says.

“There are, of course, policies made for the protection of transgender people. There is a transgender board as well. However the implementation of such policies is in question,” she adds.

The landmark 2014 NALSA verdict by the Supreme Court gave trans people the right to self-identify their gender. But, in 2020, a new law, the Transgender Persons Protection of Rights, replaced this judgement.

Kaushik Gupta, an advocate practising in the Calcutta high court, explains that legalising a relationship between a cis woman and a trans man can be a problem under the new law. Without surgery, the marriage will still be seen as a same-sex marriage which is not legal in India.

“If a cis-woman and a trans man are in love and the trans man has undergone a sex reassignment surgery, then that person becomes a man in the eye of the law. Therefore, the marriage there is between a man and a woman,” he says.

“You can have a social ceremony, but you cannot register the marriage without documents,” says Gupta.

Transgender activist and actor Tista Das is an administrator at SRS Solutions, an organisation that serves those seeking sex reassignment surgery. She explains that the going rate of between Rs 2 lakh to Rs 4 lakh, is prohibitive for many. Das and her husband both had surgeries and are now legally seen as woman and man respectively, with their union registered under the Hindu Marriage Act.

Gupta adds that some people do not want to identify as transgender, but as a man or a woman: “So, for them, to be forcefully identified as a trans person is problematic and a traumatising situation.”

In an affidavit filed before the Delhi high court, the government said, “Same-sex individuals living together as partners and having a sexual relationship (which is decriminalised now) is not comparable with the Indian family unit concept of a husband, a wife, and children, which necessarily presuppose a biological man as a ‘husband’, a biological woman as a ‘wife’ and the children born out of the union between the two.”

For now, Shonali and Agnes remain dependent on the goodwill of strangers. Agnes is currently a cashier in a garment shop which pays her Rs 5,000 a month. Their rent is Rs 2,000 and they can barely survive the rest of the month.

Despite searching daily, Shonali is yet to secure work. Their NGO rations will end soon, leaving a gap before Agnes’s next salary.

Sitting under the tiled roof of a bright green room, Shonali browses contacts on her smartphone, trying to figure out who she can call for help.

“I feel like I am living in jail. I don’t even have the money for bus fare,” she says. Waiting all day for Agnes to return is difficult: “I am haunted by bad thoughts. What if my family comes to take me away?”

Fortunately for Diya and Diwan, both their mothers have extended reconciliatory gestures. During the pandemic, Diya contacted her mother, whom she had not spoken to for almost a year.

She’s delighted to say that nowadays, her mother always makes a point of sending two portions of food.

This story was written as part of a media skills development programme run by the Thomson Reuters Foundation for individual journalists supported by the Swedish Postcode Foundation. The content is the sole responsibility of the author and the publisher.