In Pakistan, where discrimination and violence against the trans community has thrived for years, will the passing of a recent Bill that gives the country's transgender citizens their fundamental rights, change things for the better? 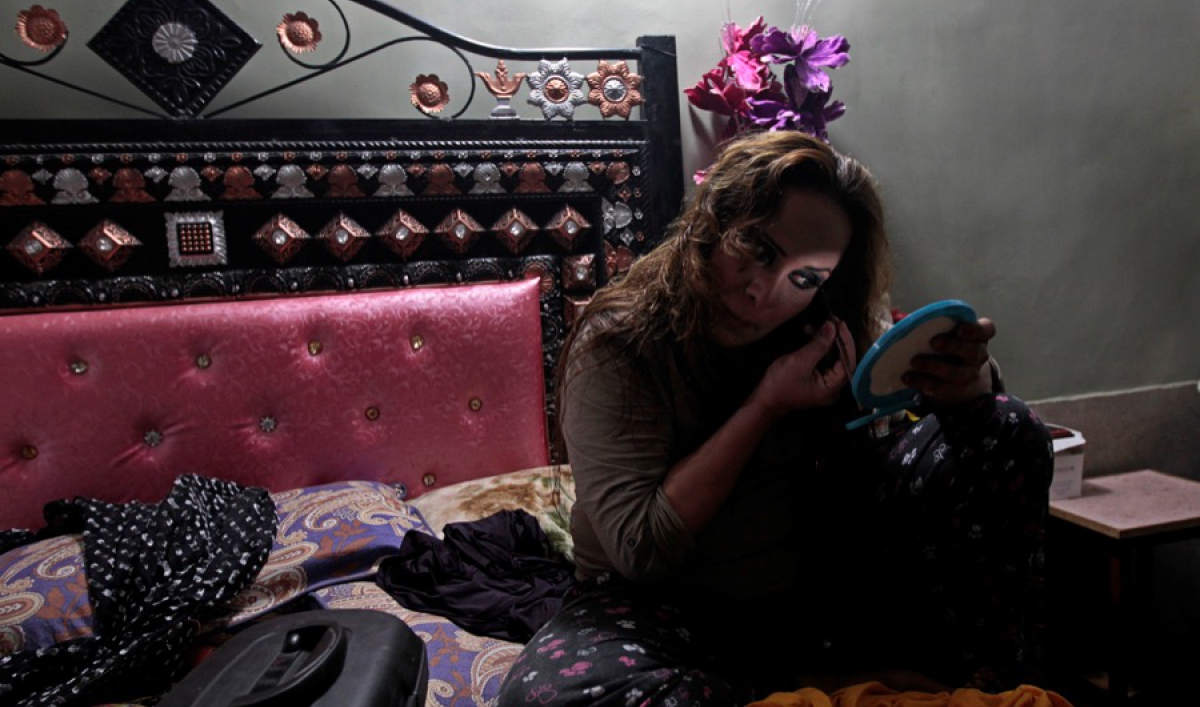 Farzana Jan, a member of the transgender community, in Peshawar in January 2017. Credit: Reuters/Caren Firouz

Lahore: The issues faced by the transgender community in Pakistan are so many that once they begin to voice them, it becomes obvious how intermingled these problems are in everyday lives. Going to college, working at an office or going to the market may be simple acts for many, but when seen through the lens of a marginalised community, even these daily tasks seem like privileges.

But are things likely to change now that Pakistan’s parliament passed a Bill last week guaranteeing the basic rights for transgender citizens and outlawing discrimination?

In Gulberg, one of the posh areas of Lahore, just before a meeting, Meena and Resham discuss how difficult it is to find  house.

“Everywhere I go, the owners tell me they cannot keep ‘someone like me’ in their house, and that I should try somewhere else,” Meena says. “All I want is a place where I can keep to myself, and no one harasses me when I walk down the neighbourhood.”

But such a place is hard to find for transgender persons. Resham assures her that she can help as she knows some real estate dealers.

Twinkle, a transgender woman spoke about an issue she had at a hospital.

“I had to get a drip, because I was severely dehydrated, but when I got there, the doctors and nurses did not attend to me,” she says, speaking of a small private hospital. “They kept saying to my attendants, ‘take her somewhere else: we only have sections for men and women here’.”

Meanwhile violence remains at the top of the list even in its most extreme forms.

In May 2018, the Human Rights Watch brought its attention to the killing of yet another transgender woman in Peshawar. ‘Munni’, who was at a wedding for a dance with her other transgender companions, did not have change for Rs 1,000 that the clients wanted in order to shower the dancers with money. An argument took place, and Munni was shot dead. A rare celebration in Peshawar where authorities gave permission for a transgender party in January 2017. Credit: Reuters/Caren Firouz

This was the fourth killing in the year. It was also the 57th murder since 2015, revealing that the government had failed in providing the community with safety, or justice. In Peshawar, almost every second day, an incident of violence is reported.

Lahore-based lawyer Saroop Ijaz, who is the country representative of Human Rights Watch, reports that even in dire circumstances, hospitals refuse access to medical facilities. “When activists have sought police protection and medical treatment following these attacks, hospital staff have been unwilling to treat victims while police won’t pursue the case,” he says in an HRW report.

Many who have been seriously injured die in hospitals waiting for help. At police stations, they are abused even more, and sometimes, according to a few, are even kept overnight to be gangraped.

In the bustling Walled City area of Lahore – or ‘Andaroon Shehr’ as it is called – live Neelum and Sweety, both of them gurus in their own right. Unemployed and uneducated, they live miserable, lonely lives but still their spirited humour and light hearted approach to life – and also a temperament for drinking all night – has eased life for them to an extent.

But facts are facts.

“Almost every night the police barge into our houses and demand to know where we are hiding our clients,” says Neelum. She points out to a general myth imagined by the public that all transgender persons are sex workers entertaining male clients at their homes.

“They beat us up, they take us to the police station and sexually abuse us there,” says Gogi. “They put on their worst attitude with us. It’s like being in a ‘Punjabi film’,” she refers to the country’s quintessential ‘gandasa’ wielding films where everyone is a goon.

But as discrimination and violence thrive against transpeople, a kind of silent activism has now begun. The struggle was always there, say trans-activists, but always in the background. “Our elders could not always fight against the system, they were brave but not always strong enough,” says an activist. “But today more and more young transpeople are becoming aware. More of those belonging to the educated class are also seen, and not just those who are beggars or sex workers.”

But perhaps it is the lack of representation at assembly level, as well as other top posts, that have left the transgender community without a proper voice.

“Our property is snatched away from us by our own brothers and sisters,” says Jannat Ali, who is a performing artist as well as a leading activist. “Most transgender people are thrown out by their own parents and they have no home to go to. Eventually they begin living with a guru who plays the role of a guardian and teacher. But all this points to a lack of a legal system. A system where we are also recognised as equal citizens and our cases are also resolved.”

But more of this is mostly lip service rather than serious and planned implementation. In fact until 2017, when senator Babar Awan presented a Bill in the assembly, there was no proper process that had begun.

Senator Awan’s Bill, says Jannat, was a copy of a draft that had been made in India by some transgender activists there. The Bill wasn’t accepted in either country. There were some loopholes, and some weaknesses and eventually the Bill flopped. But soon after, in Pakistan, the federal ombudsperson asked trans-representatives from every province to come up with a draft.

This draft was rejected by the activists who claim that it is they who are in touch with the real community.

“It was just a bunch of elite people having a meeting in an air conditioned room with no sense of what the actual community wanted,” says Jannat. Later, she said she and some others quickly made visits to as many communities as they could bringing real feedback with them and in a matter of days and in utmost emergency, drafted the Bill.

It was the third version which was finally tabled and approved by the National Assembly. However, even now it has yet to become a law.

According to the Protection of the Transgender Persons’ Rights, once the bill is implemented, the transgender community would be able to get their paperwork done, specifically driving licenses, national identity cards and passports. Most importantly, they can now change their gender to ‘mard khwaja-sirah’ (male transgender) or ‘aurat khwaja-sirah’ (female transgender) in the passport, and ‘khunsa-e-mushkil’ (intersex).

But perhaps the most welcoming change is that the trans-community does not need a committee to identify their sex/gender any longer. They need only state their own self perceived identity in documents.

The National Database and Registration Authority (NADRA) – whose motto is ‘Empowerment through Identity’ – only a few years ago had a condition for ID cards to be issued to trans-persons; they would have to undergo a ‘medical exam’ so that their gender/sex could be determined.

This enraged the community so much that many refused to register.

“Are men and women examined for proclaiming they are of either sex?” asks an annoyed Neeli Rana, a prominent Lahore-based activist. “Are we supposed to show a committee of 10 people what is between our legs, just so they can tell us what we are up here?” she asks pointing to her temple.

Self identification, when implemented, will end up making life easier and definitely more dignified.

In comparison, The Transgender Persons (Protection of Rights) Bill, 2016, in India, also offended its trans-community. They were not happy with the definition, as under it, individuals would have to submit themselves to a medical examination by a district screening committee comprising of a chief medical officer, a psychiatrist, a social worker, and a member of the transgender community.

This was in stark contrast to an earlier 2014 Bill – Rights of Transgender Persons Bill, 2014 – which gave individuals the right to self-identify their sex. The Bill was unanimously passed in the Upper House but was never debated in the Lok Sabha. The 2014 draft was progressive, but later renditions made many omissions.

The 2018 Pakistani Bill tends to target many of the aspects which were omitted from the Indian Bill of 2016. It speaks of jobs and livelihood, discrimination, and right to vote etc. Overall, it targets discrimination more than violence, but still criminalises both.

Discrimination towards any transperson on the basis of their gender identity in any sector, including health and education services, trade and business, etc will all be treated as crimes.

Other than this one of the biggest issues which seem to have been resolved include their entitlement to inherit property – as men and women do. Too many property disputes with family members have ended up with transpeople becoming homeless overnight, or even being killed.

“The fact that this Bill also criminalises discrimination, and harassment towards transpeople is a huge relief,” says Mehlab Jameel, a young and well educated trans-activist. “Even though there are several loopholes or missing things we would have wanted but for now at least we have this. Now we are waiting for the President to sign this so it can be made into a Law.” In criminalising violence, the bill still refers to other criminal laws for specific punishments.

This general election, it may be likely that transpeople will come out to vote too, despite the fact that they are not happy with the recent census where they feel they have been marginalised in numbers.

“I always feel if our numbers are correctly portrayed, they may have to give us a seat,” says Neeli grinning slyly. “But that time will also come.”