Muhammad Moiz performs comedy that is riotously dirty but is also an activist, an academic and a public health practitioner. 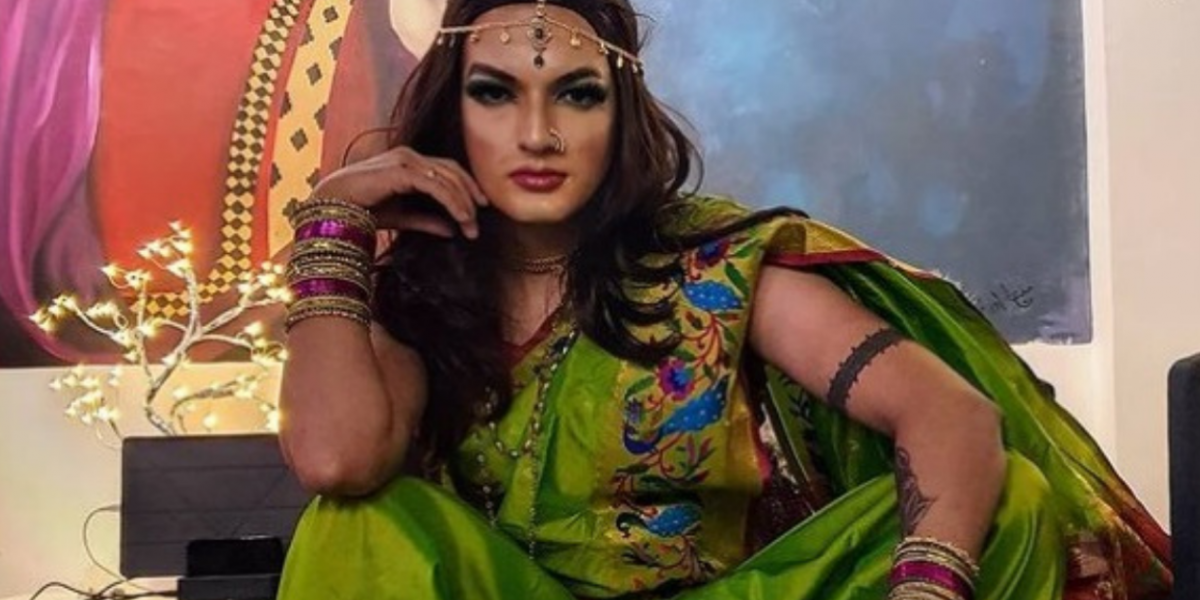 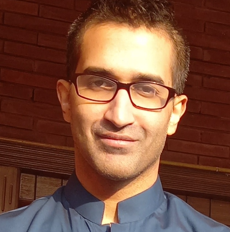 Muhammad Moiz has multiple personas: a brash, outspoken woman behind Snapchat filters called Shumaila Bhatti, ruminating on family, Rishta Aunties, lip fillers, wedding seasons and gossip; a drag queen who does dirty comedy all about sex and sexuality called Miss Phudina Chatni; and a podcast where Moiz and a friend are just being their introspective, irreverent selves.

Shumaila Bhatti was Moiz’s first foray into comedy, while Moiz was still in America on a scholarship. Also known as the Desi Bombshell – because she made jokes in Punjabi, she’s a Bhatti after all – her page has almost 200,000 followers on Facebook. After that incredible success, the Miss Phudina Chatni show started – inspired by RuPaul – when Moiz came back to Pakistan; the name is a sexual pun in and of itself, a play on Pudina Chutney with the slang words for vagina and licking thrown in the midst. 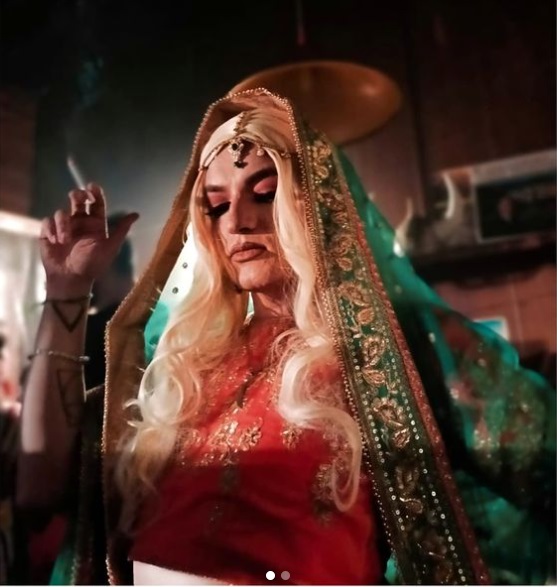 Moiz is also a Khwaja Sira community member and an activist. Moiz does not use the term transgender because of the places and language it comes from. Moiz says this is an anti-colonial, anti-imperial, native identity, not one framed by western terminology.

Khawaja Sira roughly translates to caretaker of the home, as eunuchs were to the Mughal courts; in literal Persian, ‘Sira’ means resting place, ‘Khawaja’ means master. More figuratively, it’s a term that provides a safe haven and shelter for an entire spectrum of gender identities and sexualities, without the ‘white labels’ of (LG)BTQI – emphasis purely on the latter – that Moiz says makes the indigenous sound “alien”.

Also read: Is the Matrix a Trans Film? Revisiting the Wachowskis Through a Trans Lens.

The conservatives speak against LGBTQI, but they don’t speak against Khawaja Siras because they were historically ordained in courts, in Islamic scholarship, and called on by local communities to, for instance, celebrate the birth of a child. There’s a sufi element to the term as well. The ‘guru’ and the ‘chela’, the master and the disciple. Moiz espouses the term ‘Qalandar’, because Moiz’s master was a devotee of Sehwan Sharif, one of the most popular shrines in Sindh, the shrine of Lal Shahbaz Qalandar.

Moiz was born in Abbottabad, a city in Khyber-Pakhtunkhwa but one where Hindko is widely spoken, particularly among the Hazara community. This is why Moiz’s own identity is so fluid. Moiz switches perfectly between Punjabi, Urdu and English during the drag routine. Even Moiz’s pronouns say they/her/him on their Instagram with 30,000 followers. ‘They’ being the preferred pronoun.

I met Moiz when Miss Phudina Chatni was performing in Lahore this November. The first question I asked was about the multiple tattoos. The Hindu goddess Parvati on one forearm, an Imam Zamin over that bicep, and on the other forearm, the proportions of the Golden Ratio in its diagram form, something that has fascinated the disciplines of geometry to architecture to art from ancient times.

In drag, I saw Miss Phudina Chatni wearing a sparkling orange lehenga choli with an embroidered green dupatta and a blonde wig. Her comedy is riotously dirty. Adult comedy is an understatement, she leaves no swear word untouched, no part of the body unused, no act of pleasure unmentioned. Most of it is Miss Chatni’s own sex life, but sometimes she takes digs at the heteronormativity around her, and heterosexual men in general, the guardians of patriarchy.

Just after that, she takes a minute and asks the room to look around at all the heterosexual men sitting there, “even your significant others”. The room goes quiet. After a minute has passed, she says, “Don’t like anything you see, na?” That is the tragedy of heterosexuality, she goes on, it looks so mundane. “It’s better to become a lesbian. Even if you don’t, I recommend you have another woman go down on you at least once in life, trust me they won’t be as incompetent as these guys.”

“I’ve tried explaining vaginas to heterosexual men many times,” she goes on. There’s the hole where you’re supposed to enter, over that is a tinier hole which is the urethra, and above both of those is the magic button you’re looking for, the clitoris. “Most men can’t seem to find it, like it’s something invisible.” Then she tells the audience what the clitoris is called in Punjabi – incidentally a popular breakfast choice – and what is supposed to be done to it. “You can thank me now ladies, I’ve just educated your husbands.”

In the middle of her routine, she ponders over the words penis and vagina being so vanilla, so boring. They lack the descriptive range that Urdu and Punjabi words for genitalia have, she says. For big ones and small ones, for wide ones and narrow ones. “Like the Punjabi word for a small penis. You know, for all the Aitchisonians [those who studied at the Aitchison College in Lahore] here.”

Then come her sexual escapades. “You know you’re on Lahori Tinder when all the good looking men are from India.” She says of Lahore, which is so close to Amritsar that Tinder’s search distance shows people from across the border. Her hookups drive her to DHA Phase 7 Lahore. “Whether it’s Karachi Phase 7 or Lahore phase 7, all phase 7s have the same purpose: to provide empty roads where people can have sex in parked vehicles.”

On one such hookup, she says, she was in a Suzuki Mehran having sex in the winter and the windows started fogging up, reminding her of that scene in Titanic. She thought why not, “I’ll put my hand on the side window too”. Only when she pulled it back, she was staring into the face of a police officer, peering in. The thulla – as a policeman is called in Lahore – said what are you doing, in a threatening tone. She answered, “Can’t you see?” “This tiny vehicle is shaking left and right like there’s an earthquake out there.” She had to bribe him to go away and the sex wasn’t even worth it. “Lahori boys, I swear.”

Talking about sex in Pakistan, traditionally a taboo subject, she says once you peel away the sanctimonious outer layer of a pious society, there isn’t even a homosexual or heterosexual or bisexual, there’s just sexual. “They don’t spare anyone or anything here”.

Also read: The COVID-19 Pandemic Has Had a Debilitating Effect on Transgender People

Moiz has been Khawaja Sira activist longer than they have been a performer. Away from the comedy, Moiz is an academic, a public health practitioner and has a masters degree in global health policy. Moiz is also on the streets protesting, and in the courts fighting cases. 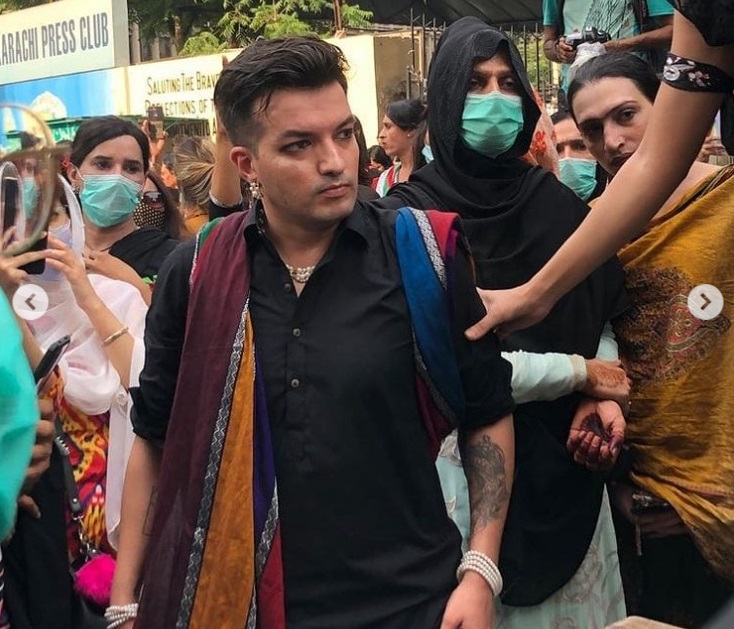 Muhammad Moiz has been Khawaja Sira activist longer than they have been a performer. Photo: Author provided

Moiz was vocal against a famous Khawaja Sira celebrity, Kami Sid, over the alleged rape and murder of a 13-year-old who came to join the community. Moiz is also the survivor of an attempted gang-rape by the Beelas [according to Vice, “predominantly ex-lovers or intimate partners of transgender people who seek revenge after being denied sexual or romantic consent”] in September 2021 because Moiz has been vocal against them too, likening them to an organised crime syndicate, preying on the Moorats – the effeminate, the essence of the Khawaja Sirah community – and other non-binary, ‘effeminate’ men.

In Khawaja Sira terminology, there are those who identify as Moorats, and those who use them for sex work, their patrons, the Beelas. Most Moorats’ source of income is from them.

Some from within the community aren’t happy with the protests, saying Moorats and Beelas have a co-dependent system going back decades and the Khwaja Sira community has always settled their matters internally, not in courts, which were imposed upon them by the British, and the remnants of the British in South Asia that are now nation-states.

In fact, their desire to remain independent and autonomous as a community involves an improvised version of the Farsi language; the Khawaja Sirah Farsi is unique, it is not Persian, it is not Urdu. it’s a coded, secretive language to communicate amongst one another without fear or judgment, while signalling to each other that they’re part of the commune. But lives are at risk, including Moiz’s own, hence the desire to get the state involved in the protection of all its citizens.

In other interviews, Moiz has said they don’t want to mainstream the queer, they want to queer the mainstream, which is what popular drag artists like Begum Nawazish Ali and Moin Akhtar’s Rozi were doing before them. Phudina Chatni’s shows are doing just that: where being queer isn’t a niche label but the norm. Abolish toxic masculinity, Moiz says, and embrace femininity. Abolish the gender of the ‘man’, the son, the brother, the father, so they don’t have daughters, sisters and mothers for them to act as overseers. Abolish these tilted power dynamics.

At the end of the Miss Phudina Chatni show, she says to an enthralled and packed audience, that looking at gender as a binary is “idiotic”. It doesn’t make any sense. “The future is femme, the future is brown, the future is queer. Get used to it,” she signs off.

Note: The article was edited at the author’s request on January 11, 2022 to remove a reference to Shehzad Ghias.

The writer is a freelance journalist and tweets at @haseebasif.