Thousands of visitors seek blessings at the kinnar akhada and in the process, wash away discriminatory stereotypes of transgender people. 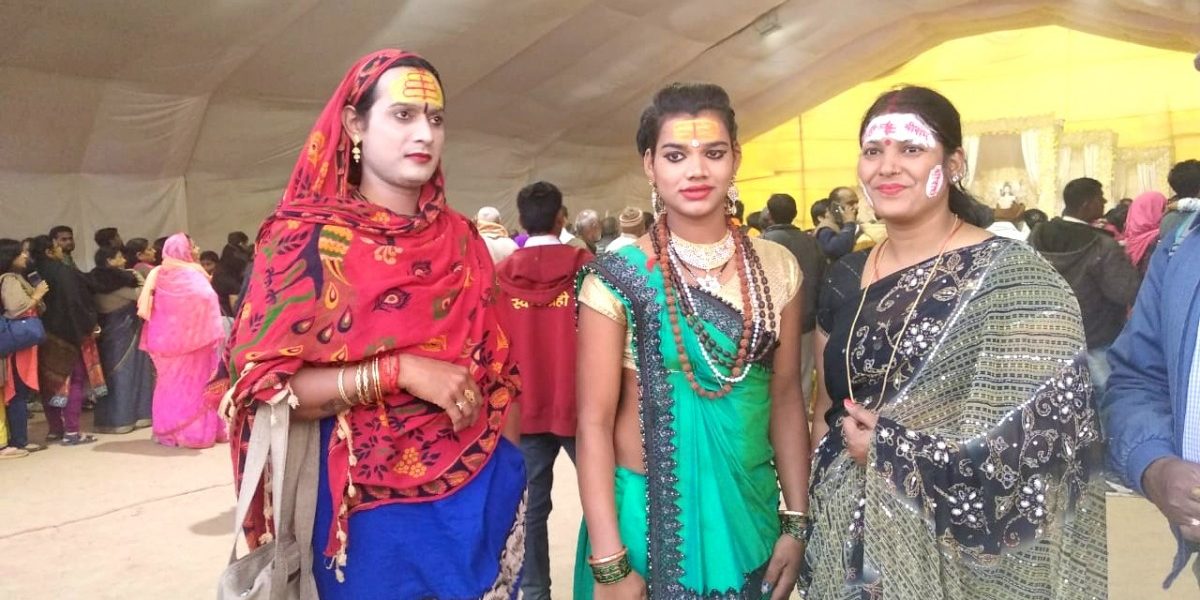 Kinnars at the akhada at the Kumbh mela. Credit: Khabar Lahariya

Pavitra, a mandaleshwar from the Ujjain Peeth, spoke to us from the first ever kinnar akhada set up at Pragyaraj’s Kumbh Mela 2019, an official chapter of the Kumbh religious sects. Wearing a saffron and gold sari, prayer beads and necklaces and a head-wrap, Pavitra was busy blessing devotees by the dozen, against a backdrop of Lord Shiva.

‘Kinnar’ is one of the many colloquial terms used in India, especially the north, to refer to transgender people. They often have to face the brunt of social rejection and are ‘othered’ in the socio-cultural subconscious via the tropes of fear and disgust.

“When a kinnar is born in a household, people always pity them,” explained Mayuri Mai, a mandaleshwar of the kinnar akhada, “If the kinnar child has siblings, then they always blame them, saying ‘Nobody will marry your siblings because of you’.”

Her forehead lined with a red tilak, she continued, “Sometimes they are forcefully kicked out of their homes and sometimes they leave them willingly. How long can you live a life of suffocation?” She also retorts, “People keep saying that we’re growing in numbers. What can we do? You are the ones having children. We can’t have children. So maybe you should stop!”

Pavitra echoed a similar sentiment, “For thousands of years, we’ve stayed away from society and religion. People in society have always known that kinnars were demi-gods, but they have never let us join them.”

Despite the social exclusion, kinnars have been traditionally regarded as possessing special powers, with hordes seeking blessings from them during auspicious occasions such as marriages and childbirths. “When they need our blessings they come to us,” said Pavitra, “or they come to take Re 1 coins from us for their gains, or our prasads, because we are blessed. But if I ever need anything, society would never help me.”

Pavitra showed us around the tent, abuzz with festivities, tables laden with delectable treats, and a strong spirit of bonhomie. “We have created all this for ourselves,” Pavitra says.

To bring back kinnars into the realm of Hindu religion – and hence into the social fold – Laxmi created a visibility for her community. Laxmi represented the transgender community in the first ‘Shahi Snan’ (Royal Bath) at the Kumbh.

Akhadas – a central part of every Kumbh – house followers of similar religious customs, views and ideologies that specialise in both scriptures and armaments. The kinnar akhada embodies togetherness explained, Mayuri Mai. “Kinnars from all kinds of castes live together. This akhada has people from different castes, religions and states.”

While the umbrella body of akhadas, the Akhil Bharatiya Akhada Parishad, did not recognise the kinnar akhada as the 14th order, Laxmi was given free reign to bring forth the ‘peshwai’, or the traditional ceremonial entry into the Kumbh. With horses and chariots, feverish dancing and music, the peshwai was followed by hundreds of devotees, all of whom have continued to flock the akhada through the days of the Kumbh mela. 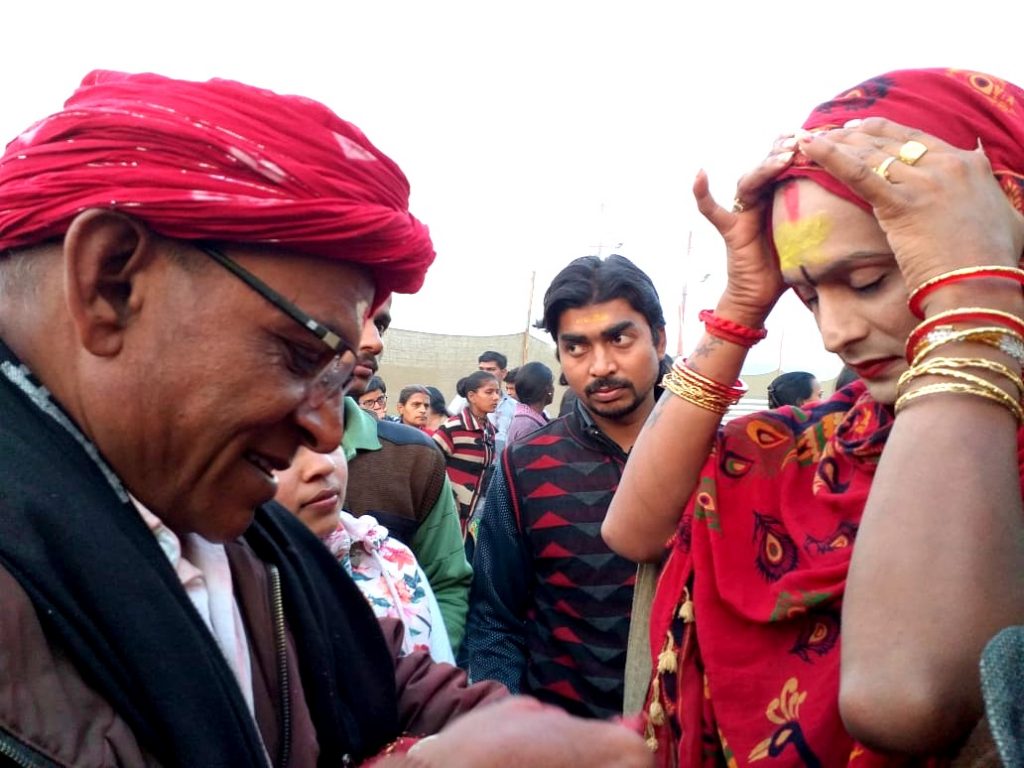 “By 1-2 pm, there is a large crowd that gathers here. Everyday 20,000-30,000 people visit our akhada, till 10 pm,” said Pavitra. A queue of devotees had formed outside the tent; Pavitra and other kinnar religious figures were blessing individuals who touched their feet, “It feels very good to know that somewhere along the way, the negativity and anger that people held towards kinnars has gone away,” she added.

Conversations with the Kumbh attendees revealed a heartening mood, with several people displaying an affirmative perception of transgender people because of the kinnar akhada. “The old perception of kinnars in society was that they are a fallen people,” Mahesh from Jalon said, “They were always only associated with song-and-dance”.

He credited the sphere of religion for the change in public perception, “Today, through religion, they have found a place of respect, and now people come to bow their heads in front of them.” Mamta Pande from Urai also spoke about her change in her attitude: “I heard the stories of Murari Bapu, who had given them a lot of respect. This has helped change my perspective on kinnars and I feel there should be such a change in society at large.”

Also Read: Why the Transgender Community is Angry Over a Bill Meant to Protect Their Rights

Among others who expressed joy at the presence of the kinnar akhada at Allahabd this Kumbh was Bela Upadhyay, a regular attendee from Andhra Pradesh. She said, “The akhada makes me feel really happy, I come to do darshan whenever I feel like it.”

Swati from Jhansi added, “I had come to meet them (kinnars), because I have never met one before, and I feel really happy that I did.” “I am very glad to see the kinnars here as religious figures,” said Parvat Sinha, also from Jhansi, “They have communicated with the Junagarh Akhada and have consequently become saints.”

Mayuri Mai recognised the impact their visibility has had on the perception for thousands of people like Sinha. “This is a great initiative and we need people to support it,” she said. “Everyone is welcome here. Men and women, elders, mothers, everyone can come to the kinnar akhada.”

As the mela nears closure, this being the last weekend, we left Allahabad with a prayer of inclusion on our lips.