Everything's Coming Up Rainbows, But Brands Can Do More for LGBTQIA+ Rights

Many brands celebrated Section 377’s demise by rainbow-ising their logos, but let’s not forget their regressive pasts, and demand more of them in the future. 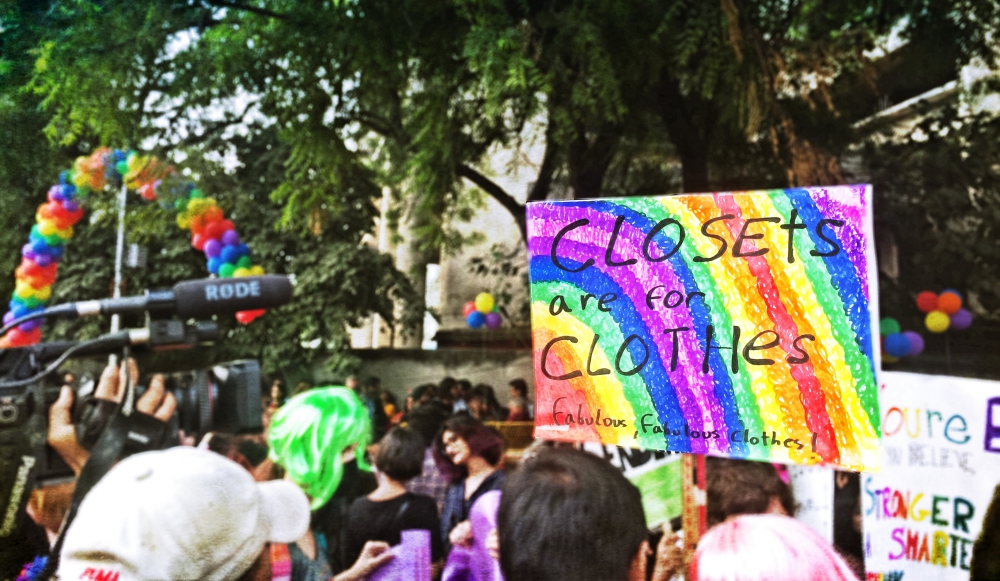 It’s been a very long time since we got some non-caveated good news. In India, since 2014 and then globally since 2016, reading the news has been a fatiguing exercise that leaves you with a knot in your stomach. But just this once our news feeds overwhelmed us with optimism. On Thursday, we got a chance to cry happy tears and embrace each other in joy not solace. Places like Delhi’s Jantar Mantar, often home to angry, desperate protestors, welcomed revellers instead.

And since corporations are basically people these days and are always looking for ways to increase their socially conscious cred, they joined in our joy. 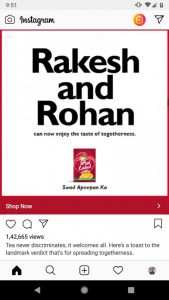 Everything’s been coming up rainbows since Thursday – commuters woke to rainbow Uber routes on Friday morning, Brooke Bond Red Label tea assured its Instagram followers that “Rakesh and Rohan” can now “enjoy the taste of togetherness” like heteros can, and of course, nearly all the logos and profile pictures on our social feeds went rainbow for the occasion. So far so heartening.

On the face of it, there’s nothing wrong with brands endorsing the decision. Scrapping Section 377 at its heart is about recognising LGBTQIA+ individuals as humans and citizens. And, of course, for companies, that also means recognising them as consumers and also pandering to their interests.

Our regular media and culture is full of hurtful negations – and intentional slights as well – so if a rainbow icon or an ad portraying a same sex relationship makes someone feel a little more seen, a little less invisible to mainstream society, there’s no harm done there. In fact, given most political parties’ disappointing silence after the judgement, these small acknowledgements matter even more. Politicians may not see any value in these citizens, but at least companies are willing to acknowledge and celebrate the diversity of their consumers, even if it’s with an eye on profit margins.

However, as several others have already pointed out – most of these companies are hardly pathbreakers or “bold” for running such promotional measures. For instance, most of these are targeted advertisements meant to preach to an existing choir, not reach new audiences. Brooke Bond didn’t run a newspaper or TV ad declaring that it caters to the “Rakesh and Rohan”s of the world – it went with targeted promotions on Instagram instead. Uber, too, knows its user base is largely urban, wealthy and is likely as not to subscribe to “liberal” values, i.e., the very people who would support this judgement. To put it bluntly, by running these ads for specific audiences, these companies have nothing to lose and everything to gain by capitalising on our emotions.

Which means that their allegiances will sway in whatever direction their target customers swing towards. Think of how many pro-LGBT ads such companies ran during the years between now and when homosexuality was re-criminalised. The answer is probably, none.

Even if we set aside any positive steps towards equality, consider past ads these brands ran. Can you recall a single tea brand that hasn’t run an ad where a dutiful wife makes tea for her husband? Scroll through Uber India’s YouTube page and you’ll find a number of ads featuring young Indians – going on dates, scouting each other out as potential interests, flirting – not one features two people of the same sex in a romantic/sexual dynamic.

If you take the time to watch all 45 ads Flipkart released in 2017, you won’t find a single ad featuring anything but “normal” people, but you will find ads featuring the ‘naggy wife’ and the ‘henpecked husband’ who has to make all the important consumer decisions like which TV to buy, because the wife is obviously unable to make decisions by herself.

Sacred Games, Netflix’s first big Indian production, won big points for its portrayal of Kuki, a trans character, but also lost major points for having a cis woman play the role, when it could have used this opportunity to hire and showcase an actual transgender person’s talent to a global audience. And then Lust Stories, an anthology on Indian relationships, didn’t feature a single non-cis person or non-heterosexual pairing.

A large, admittedly more cynical, part of me wants to hold these companies responsible for their past slights; yet, under the influence of this new optimism, I find myself hoping that the companies will now take their cue from the judgement and produce content for the audience that they’re trying to woo with this rainbow-isation. 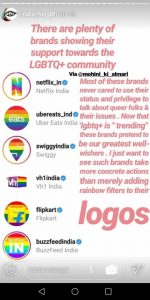 If they want to show us that they support the LGBTQIA+ community in India and attract our attention and money, then they should hold up their end of the bargain and actually use their influence to boost the community. As we’ve all said before, one law does not guarantee social acceptance or even tolerance, but one ad or one show can go a long way towards changing perceptions and opening up difficult conversations. Just think of that Vicks ad from last year which featured a trans woman and did so at a time when there was no Supreme Court judgement to trail behind.

The striking down of Section 377 will make some lives easier, but others – who don’t have the protections of privilege – will be subject to the same dangers and discrimination as before. In the absence of good policies from the state, these companies could find other ways to be good allies. For instance, as large employers who hire for a wide variety of roles, Netflix, Flipkart, Uber, Brooke Bond etc could make an effort to hire LGBTQIA+ persons to foster financial independence and social acceptance.

Right now, these brands are riding a popular wave, not leading it, which amplifies the wave but doesn’t actively expand it. But now they could take our money and attention and channel it towards the community they used to win brownie points from their consumers.