The difference between a nation state and a criminal is that the state must necessarily ride a higher moral horse. 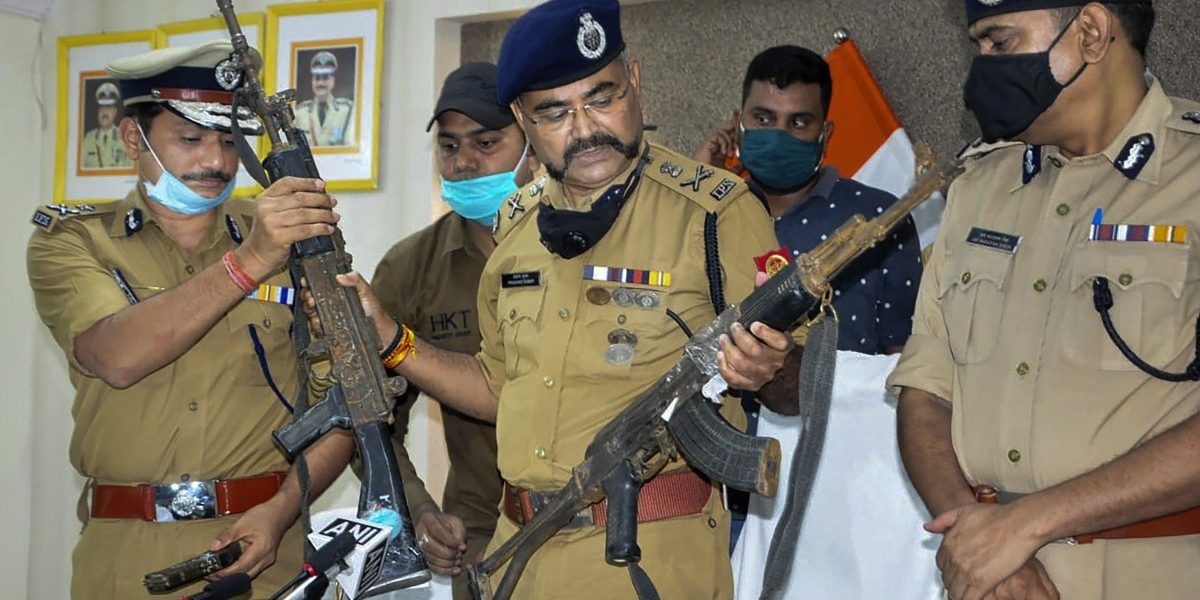 The encounter killing of Vikas Dubey, the gangster accused of many murders including that of eight policemen earlier this month, has once again highlighted the impunity with which the police in India can execute people. Dubey was the 119th person to be killed in police encounters in UP since March 2017.

A simple look at the police account of Dubey’s killing highlights glaring inconsistencies.

First, why would he try to escape? Unless Dubey was psychologically unstable, there is no reason to believe that after so coolly and nonchalantly surrendering a day before in full view of the public, he would suddenly decide to run for his life, and that too in front of scores of armed men.

Second, he could have been safely moved to Kanpur by helicopter or BSF aircraft. Moving in a huge carcade for 750 km could make it a public spectacle for gushing supporters; professionally, it was a bad idea.

Third, it is both inconceivable and unpardonable that a dangerous criminal was not handcuffed in spite of the Supreme Court permitting it in Prem Shankar Shukla vs Delhi Administration and Citizens For Democracy vs State Of Assam And Ors. A day before, his aide Prabhat Mishra is said to have tried to escape in precisely the same manner. They had the same story of pistol snatching for Mishra and countless others before him. Do they never learn from their mistakes?

Fourth, in any place where it is apprehended that criminals could dare to snatch cops’ weapons, the orders are to secure them with lanyards. Why this was not done?

Fifth, the circumstances under which the media cars following the Dubey carcade were stopped at the toll plaza are highly suspicious.

Sixth, apparently, there was a change of car carrying Dubey also. Why?

Seventh, there is no explanation at all of how the overturned car is lying comfortably on its side. If it had hit the divider, there is no damage on the divider; in any case, the car is lying before the divider. If the car had skidded, there ought to have been skid marks both on the road and on the wet ground where it is lying. From the visuals of the ground, there are no marks of braking, slipping, dragging, whatsoever anywhere – neither on tarred surface, nor on the wet dirt patch. There is no mud on the tyres. Skidding takes place when the front wheels are at an angle with respect to the rear wheels (which are parallel to the road) and one brakes hard. The resulting torque makes the car rotate, that is, skid. A car, which has skidded, will not end up lying parallel to the road, with practically no damage.

Eighth, the police have advanced the theory that a herd of cattle had suddenly come on the road. This is improbable because there are no hoof marks on the wet ground. Moreover, a herd of cattle should have been visible from considerable distance – there are no such plants in the fields, which could conceal them. It is difficult to believe that in the carcade, only this car should have stumbled upon the herd of ‘flying cattle’.

Ninth, the way the car is ‘sleeping comfortably on its side’ leaves no doubt that it has just been toppled there. For the given Mahindra TUV300 car, if a dozen men are pushing, this being a standard problem in Plus-Two level physics, it would require just 69 kg of force per person to topple the car softly – a very easy feat for men of ordinary build also.

Tenth, it is difficult to believe that a car overturns with several occupants in it and all of them except the criminal are so dazed by the injuries that they could not offer the slightest bit of resistance as he snatches a weapon from them and then scrambles out of the car.

Eleventh, even if we accept that the car carrying the most important person genuinely overturned, armed cops in the other vehicles only a few yards behind or ahead should have come running to it and surrounded it before anyone could scramble out of it.

Twelfth, it is impossible to accept that Dubey would be such a fool as to try to escape in open fields all around with practically no cover to hide – those are not the ravines of Chambal! It had rained and the ground was wet. Yet no mud was seen on the clothes of Dubey or the cops who pursued him. No footprints were shown in the field to indicate the path, which he took. We are also given to understand that he had some implants in his legs and could not run properly. If that is true, how did he even hope to outrun the cops?

Thirteenth, from the visuals of the dead body, even his coronavirus mask is found in place. A car was overturned, the man scrambled out of it, ran helter-skelter in the fields, shot at people and was shot in turn – in spite of all this vigorous exercise, his mask did not slip.

Fourteenth, in the visuals, the man was seen shot in the chest in front. For a man who was running away, there are only two situations in which he could get shot in the front. He turns back to face the pursuers to fire at them – and, is shot. In that case, they could have at least bothered to take a photo of the dead body with pistol in hand and facing them. This was not made available. Or, perhaps in the style of Rajnikant films, the cops were firing pre-programmed bullets, which overtook him and then turned 180 degrees to shoot him in the chest.

The commission and SIT appointed to inquire into this encounter will submit its report in due course. However, everything discussed above raises such disconcerting questions, which point strongly towards a ‘fake encounter’.

Next time they cook up a story, the UP police are advised to watch Con Air starring Nicholas Cage and other films on the escape of criminals.

Was Dubey eliminated to ensure he carried to the grave whatever secrets he had – of his connections and transactions? I don’t think so. The age of the ‘hawala diary’ is passé. There is little reason to believe that the nexus of police-criminals-politicians-rich and influential people, with their great expertise in ‘parking’ ill-gotten wealth, would have left such traces that could lead to a conviction. It would have led to embarrassment with political fallout. However, since the beneficiaries could be found across the political spectrum, the effect would have eventually evened out.

Logically, the primary reason for the extrajudicial killing appears to be to bolster a macho image of the system; the cover-up motive is secondary. The authorities wanted to reinforce the notion of ‘men with nailed fists’ who maintain that ‘rule of law’ is for sissies.

The most common argument in support of fake encounters is that the judicial process is slow and that it is difficult to secure convictions against people who can ‘silence’ witnesses. However, what prevented the people and the governments all these years from amending the law to provide for speedier justice and appropriate rules of evidence or protection of witnesses? Why are we still dragging the corpse of a Criminal Procedure Code first introduced in 1898 and Evidence Act of 1872? The wilful failure to reform the judicial system cannot be turned into a license for adopting ‘illegal shortcuts’ instead.

We know that if it suits them, many people are happy with slow justice and ‘tareekh pe tareekh’ – the interminable postponement of cases. The same people start complaining when it does not suit them. This double standard is condemnable.

In Prithipal Singh etc vs State of Punjab & Anr. etc, the Supreme Court had established that, in the name of combating terrorism in Punjab, the police had killed at least 2,097 innocent citizens and burnt their bodies surreptitiously.

There are several psychological and systemic reasons for the cops resorting to extrajudicial killings.

The first is their obsessive desire of taking credit and medals for good work they never did and never deserved. The desire of instant justice does not drive them as much as the desire of ‘instant popularity’.

The second is the ‘abject surrender’ of their professional integrity to the wishes of their ‘masters’. Bureaucrats have always behaved in a slavish manner; however, slavery is now displayed proudly as a medal.

The ‘masters’ need not always be political leaders who reward them with plum postings and post-retirement assignments. As found by the Supreme Court in the case of Prakash Kadam & Etc. Etc vs Ramprasad Vishwanath Gupta & Anr, police have taken up ‘contract killing’ for money also.

Third, they have become a victim of their own rhetoric and the sycophancy of a section of the media, which hails the so-called ‘encounter specialists’ as ‘super-cops’ and extols the ‘virtues’ of their misplaced machismo.

The police do not bother to change their ways because they are acutely aware of the institutionalised ‘culture of impunity’ and that they have the vocal support of a large section of bloodthirsty people. It has been reported that out of 119 killings in UP so far, 74 mandatory probes have been completed and the police got a clean chit in all of them.

The much-touted police reforms are no solution. The malady lies more with the men who work for the system. It is inconceivable that simply because the police commissioner has complete power of transfers and postings, the cops will change their ways. The so-called police reforms are actually a clever ploy of the police officers to wield more power without any accountability to the public. There is no reason to believe that, in spite of being products of the same society, government officers are inherently more virtuous than political leaders whose ‘control’ they want to shake off, even as the latter are directly accountable to the people.

The difference between a nation state and a criminal is that the state must necessarily ride a higher moral horse. The state gets moral authority to deprive a citizen of his life only because it does so in compliance with the laws created for itself whereas the criminal violates those very laws.

Instant or vigilante justice delivered on the whims and fancies of a few people in power is fraught with possibilities of rampant abuse.

As Earl Warren, the former Chief Justice of the United States, said in Spano vs New York, the police must obey the law while enforcing the law. Life and liberty can be as much endangered from illegal methods as from the actual criminals themselves. Let us strive hard make it non-negotiable. We must do justice to the martyred policemen and slain people, but not by doing injustice to others. The ‘Rule of Law’ cannot be buried under populist pressure. The state must abide by the law; it cannot be allowed to become a law unto itself.

If we fail in this duty, we will be forced to lament in vain like Mark Antony on the murder of Julius Caesar, “O, pardon me thou bleeding piece of earth. That I am meek and gentle with these butchers.”

Dr. N.C. Asthana, a retired IPS officer, has been DGP Kerala and a long-time ADG CRPF/BSF. He tweets @NcAsthana. Views are personal.