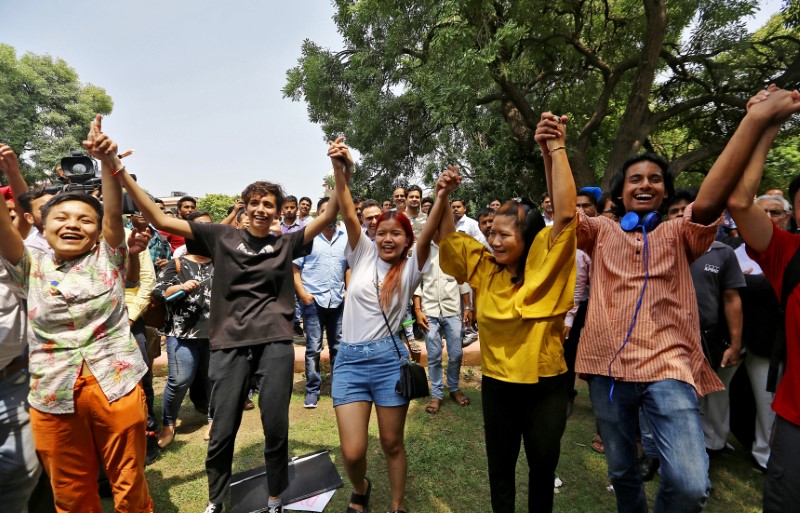 People celebrate after the Supreme Court's verdict of decriminalizing gay sex and revocation of the Section 377 law, inside the Supreme Court premises in New Delhi, September 6, 2018. Credits: REUTERS/Stringer

A five-judge constitution bench headed by Chief Justice Misra unanimously held Thursday that the Lesbian, Gay, Bisexual, Transgender and Queer (LGBTQ) community possess the same constitutional rights as other citizens of the country.

The bench termed sexual orientation as a “biological phenomenon” and “natural” and held that any discrimination on this ground was violative of the fundamental rights. The top court decriminalised part of Section 377 of the Indian Penal Code that criminalises consensual gay sex, saying it was irrational, indefensible and manifestly arbitrary.

“Today is a day of gay pride, a day of celebration, a day when respect and dignity were finally restored in India for lesbian, gay, bisexual, transgender and intersex people,” said Michel Sidibe, Executive Director of UNAIDS.

“I applaud the brave activists, civil society organisations and community groups that have fought long and hard for this injustice to be reversed.”

UNAIDS said that criminalization hinders people from accessing and using HIV prevention, testing and treatment services and increases their risk of acquiring HIV.

In India, HIV prevalence among gay men and other men who have sex with men is 2.7% and among transgender people is 3.1%, compared to the national HIV prevalence among all adults of just 0.26%. Around three out of ten gay men and four out of ten transgender people in India who are living with HIV do not know their HIV status. Many LGBTI people living with HIV do not have access to HIV treatment, the UN agency said.

It added that gay men account for 18% of all new HIV infections worldwide.

UNAIDS urged countries to ensure the full respect of the human rights of all people, regardless of their sexual orientation, through repealing laws that prohibit sex between consenting adults in private, enforcing laws to protect people from violence and discrimination, addressing homophobia and transphobia and ensuring that crucial health services are made available.

“I hope this decision sets the trend and is followed by similar decisions in other countries that remove unjust laws criminalizing homosexuality,” Sidibe said.

In June 2016, United Nations Member States committed in the Political Declaration on Ending AIDS to promote laws and policies that ensure the enjoyment of all human rights and fundamental freedoms for children, adolescents and young people, particularly those living with, at risk of and affected by HIV, so as to eliminate the stigma and discrimination that they face.