CCTV footage accessed by The News Minute has, meanwhile, shown that Sathankulam police lied in their initial FIR. 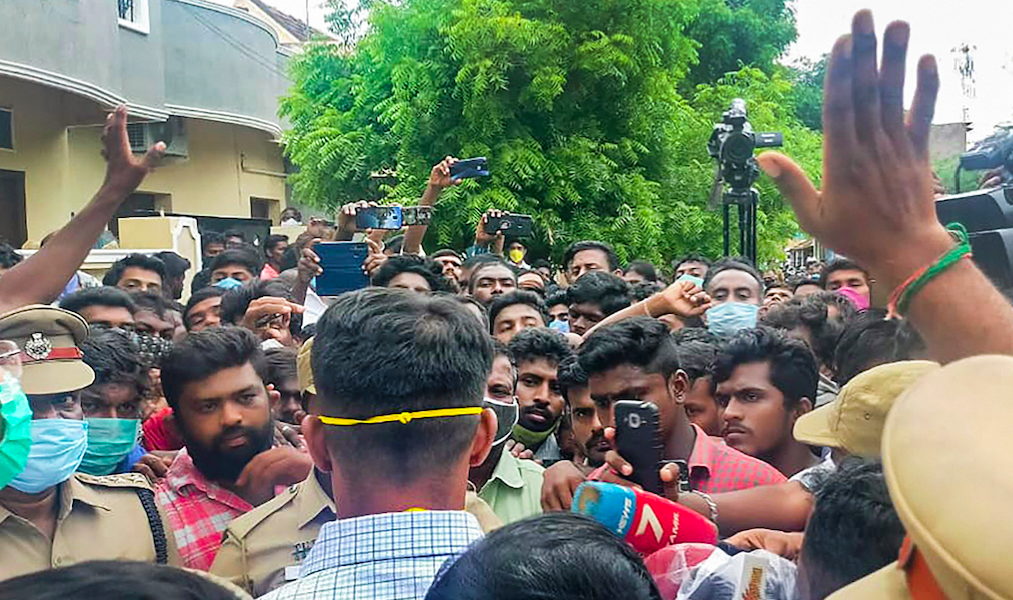 New Delhi: Two developments in connection with the custodial deaths of Jayaraj and Bennix in Tamil Nadu’s Tuticorin have revealed that Sathankulam police have lied about the circumstances which led to the father and son’s initial detention and have, since the news of their deaths exploded, attempted to block the probe into their murder in the hands of police.

Amidst reports of local police’s lack of cooperation in the probe, Madras high court on Monday directed the Tuticorin District Collector to assign Revenue Officers to the Sathankulam police station to ensure that evidence associated with the brutal custodial killing of Jayaraj and Bennix is preserved, LiveLaw has reported.

P Jayaraj and his son Bennix, arrested for ‘violating’ lockdown norms by keeping their cellphone shop open after business hours, died at a hospital in Kovilpatti on June 23, with their relatives and eye witnesses alleging they were severely thrashed at Sathankulam police station by police personnel earlier.

The incident has triggered a national furore, after which five policemen, including an inspector and two sub-inspectors, were suspended.

The court’s Madurai bench gave the order after the Tuticorin Principal District Judge said that police at Sathankulam was not cooperating with the Judicial Magistrate when it came to collecting clues under the Code of Criminal Procedure’s Section 176(1), the report mentioned.

Reports have said the court has initiated contempt proceedings and has asked for the police brass to be transferred so that a free probe may be done.

The bench also ordered that an additional forensic team from Tirunelveli be dispatched for the purpose if necessary.

Meanwhile, in the face of mounting pressure, the court was also told that the Tamil Nadu government has decided to transfer the probe to the Central Bureau of Investigation (CBI). Chief minister K. Palaniswami had announced this on Sunday and said that his government would await the nod of the court.

The government’s decision will be informed to the Madras high court, which is seized of the matter, and secure its approval before transferring the case to the central agency, Palaniswami told reporters in Salem.

The high court on Monday left this decision to the discretion of the government. LiveLaw quoted it as having said, “Though we appreciate the deference shown to this Court by the State Government, we make it clear that, to transfer or not to transfer the case to the C.B.I., is the policy decision of the State Government and such a transfer is governed by the provisions of the Delhi Special Police Establishment Act, 1946.”

The bench also delineated several steps of formalities to be undertaken should the case be handed over to CBI.

Speaking to The Wire, Tuticorin MP Kanimozhi had said that the case was one of “blatant murder” and questioned how “police officials who could commit such heinous crimes enjoy this kind of impunity.”

Meanwhile, CCTV footage of the evening when Jayaraj and Bennix were picked up, accessed and released by The News Minute,  shows that police had lied about the circumstances that led to their detention.

“While the police claimed that the father-son duo had ‘rolled on the ground’ causing internal injuries to themselves – no such thing happened,” the report adds.

The visuals of the CCTV directly contradict the police’s claims in the FIR and reveal an entirely peaceful evening at the site. However, police noted in the FIR, “In front of the shop, Jayaraj, Bennix and a few others were standing. We told them not to crowd and go back to their homes. Others listened to us and went home but Jayaraj and his son Bennix sat on the ground and refused to go home, used obscene language at us and rolled on the ground. They got internal injuries because of that.”