With its engrained anti-Muslim agenda, the current political regime may find it problematic to hold up its image as a champion of Muslim women.

The government has effectively used triple talaq as a political whip. Credit: Reuters 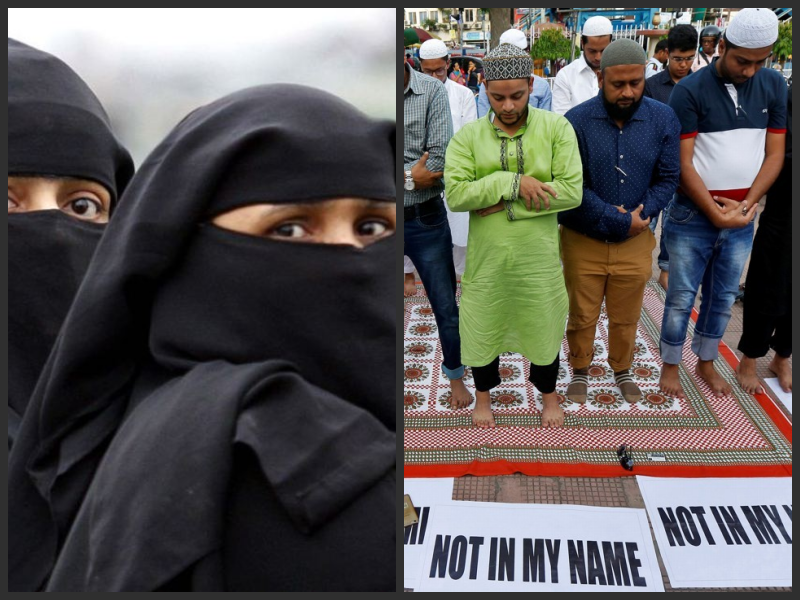 The government has effectively used triple talaq as a political whip. Credit: Reuters

Two issues affecting the Muslim community – which have been in the public domain since the BJP-led NDA government came to power in 2014 – have received contrasting responses from the government and the media. While killing of Muslim men did not arouse public conscience, triple talaq – which made headlines around the same time – received instant and unprecedented media publicity.

The lynching of Muslims on the mere suspicion of slaughtering cows, storing beef or merely because they “look Muslim” has gone on unabated and reached a new low with the stabbing of 16-year-old Junaid Khan on June 23, which has sent shivers down the spine of all Muslims. At the same time, the government is poised to introduce a new “gender just” law to replace the Muslim Personal Law based on Sharia – in the name of saving Muslim women from the tyranny of their archaic laws.

It is interesting to track the trajectory of these two issues.

The killing of 60-year-old Abdul Ghaffar Qureshi by a violent mob on May 31, 2015, in Birloka, Rajasthan, went unnoticed by the media. A rumour was spread that Muslims had killed 200 cows for a feast. Pictures of the carcasses started circulating on WhatsApp and Facebook and by the evening of May 30 in Birloka – a place with no history of communal violence and 60 km away from where the carcasses were found. Soon, a mob gathered, instigated by Qureshi’s neighbour who wanted him to leave the village. The mob assaulted him with sticks and iron rods and Qureshi succumbed to his injuries the next day.

In contrast, the release of a report on August 20, 2015, at a press conference in Delhi stating that abolition of triple talaq and polygamy are the primary concerns of Muslim women, received instant media publicity. The report, based on a study of 4710 respondents, was conducted by the Bharatiya Muslim Mahila Andolan (BMMA).

Soon, the media projected that ‘Muslim women in India’ consider polygamy and triple talaq as their most pressing concerns, overriding illiteracy, poverty and marginalisation.

The wide publicity given to this issue by the media led a Supreme Court bench on October 16, 2015 – while hearing a case of a Hindu woman’s right to ancestral property – make a reference to the chief justice to constitute a special bench to examine these discriminatory practices. But the spate of killing which had occurred during the fortnight preceding this reference did not get the same type of heightened exposure. The Supreme Court seemed to be oblivious of the venom of intolerance that was rupturing the secular fabric of the country.

On September 28, 2015, 50-year-old Mohammed Akhlaq was lynched outside his home in Dadri on the mere suspicion that the meat stored in his fridge was beef. Akhlaq’s daughter had asked a poignant question, “If the meat turns out to be mutton, will they bring my father back?”

While this case received media attention, two others around the same time went unnoticed. On October 9, 2015, 19-year-old Zahid Ahmed was set on fire in his vehicle in the Hindu-majority area of Jammu after cow slaughter rumours were circulated. Later, investigations revealed that the cows he was accused of killing had died of poisoning. On October 13, a truck driver, Noman, was beaten to death by a mob at Sarahan, near Shimla, because of suspicion that he was smuggling cattle.

At the other end, within a month of the suo motu reference, in November 2015, Zakia Soman and Noorjehan Safia Niaz, the two founders of BMMA, wrote a letter to the prime minister to enact a Muslim Personal Law as per the Quranic provisions. Triple talaq continued to get high level of publicity even while lynching of Muslim men continued unabated.

On July 16, 2016, Venkaiah Naidu argued in favour of a uniform civil code which he termed ‘common civil code’ as per the RSS terminology, and stated that the foundations of secularism would get strengthened if such a code is introduced. To augment his arguments, he borrowed a quote from Mahatma Gandhi, “I want my country to be wholly tolerant, with its religions working side-by-side with one another.” Indeed.

Triple talaq acquired further communal hue when the prime minister, while campaigning in UP, lamented over the plight of “Muslim sisters”. This led researchers Abusaleh Shariff and Syed Khalid to question the prime minister’s motive. Relying upon the 2011 Census data, they pointed out that the number of deserted Hindu women who live in deplorable conditions far exceeds the number of Muslim divorcees and deserted women. The numbers are staggering – out of 2.3 million separated and abandoned women, around two million are Hindus, while 2.8 lakh are Muslims. No attention is paid to them, even as the prime minister lamented over the plight of Muslim divorcees.

Worse was to follow. After winning elections with a thumping majority, clearly on an anti-Muslim vote, the newly appointed UP chief minister Adityanath compared triple talaq to the disrobing of Draupadi. His cabinet colleague Swami Prasad Maurya commented that Muslims resort to talaq to “satisfy their lust” and leave their wives to beg on the street. This aroused the wrath of members of the Muslim Women’s Personal Law Board, who demanded his resignation.

Even as the chief minister expressed concern over triple talaq, three activists of the Hindu Yuva Vahini, founded and led by him, were arrested for the alleged lynching of 45-year-old Ghulam Mohammad in Bulandshahr on suspicions that he had helped his 19-year-old relative elope with an 18-year-old Hindu girl. The RSS and its affiliate organisations have been carrying out systematic propaganda about a Muslim plot to seduce and convert Hindu girls, rendering ordinary Hindus suspicious of Muslims.

It is against this backdrop that one must examine the three positions advanced before the constitutional bench headed by the chief justice during the recently concluded triple talaq hearing.

Various Muslim women’s groups who intervened in the matter as well as Muslim law experts Arif Mohammad Khan and Salman Khurshid affirmed the second option. Even BMMA changed its earlier position and advanced a cautious approach of minimalist intervention and argued that since the law had already been declared in Shamim Ara (2002), the test of constitutionality is unwarranted.

Predictably, the Muslim Personal Law Board advanced the third position that reforms must come from within as per the constitutional assurance to minorities under Articles 25-26 of the constitution. Invoking the analogy of the golden eagle in the Alaskan skies preying on the little birds below who protect themselves by building their little nests, Kapil Sibal compared the minority community to these little birds and argued that they have come with great faith to the Supreme Court to protect their little nests – their tradition and culture.

The position advanced by former attorney general Mukul Rohatgi on behalf of the government was to bring a total ban on all forms of talaq. When asked how Muslim husbands will divorce their wives, his prompt response was: “You ban it today, and we will bring in a new law tomorrow.” The eagerness of the government to enact a law was clearly on display.

The dilution of its position by BMMA did not matter to the government since two other women’s organisations – the RSS-affiliated Rashtrawadi Muslim Mahila Sangh and the secular-feminist Bebaak Collective, though speaking from two different ideological locations – had stepped in to take its place and demand statutory reforms. In fact, the Bebaak Collective’s position is not just for reform of Muslim personal law, but for a gender just uniform code for all.

Naidu’s comments on May 20, the day after the hearing concluded, are revealing – if the Supreme Court does not ban triple talaq, the government may step in and enact a law. The government was not trying to ‘interfere’ with personal matters but was only trying to ensure justice to women and equality before law, he added. Coming in the wake of lynching of Muslims, the assurance sounds hollow.

Comments by the prime minister and various ministers clearly show how effectively triple talaq has been used as a political whip, but they could do it with a clear conscience – they were not doing it suo motu, the demand had come from Muslim women themselves.

Hopes of a “gender just” law amid anti-Muslim sentiments

Enacting a new statute seems to be problematic under the current political regime with its stated anti-Muslim agenda. In a recent article, Mani Shankar Aiyar asked a pertinent question – whether this parliament, with the lowest Muslim representation of just 4.2%, has the moral mandate to legislate on matters concerning Muslim family relationships, which the community considers an integral marker of its identity.

The spontaneous outbreak of protests by concerned citizens in almost every major city against the wanton killing of Muslims has dented the government’s image as a champion of liberating Muslim women from the barbaric, lustful, pre-modern Muslim men. What appears far more barbaric and pre-modern is the public lynching of Muslim men by fringe organisations of the Sangh parivar.

The secular-feminist Bebaak Collective, an active participant in these anti-establishment protests, may find it difficult to negotiate with this government to enact a new “gender just” law. When a community is under seize, the task of reforming its personal laws becomes extremely challenging. B.S. Sherin, a research scholar of comparative literature in Hyderabad, sums up the current dilemma:

“A viable feminist approach cannot de-historicize Muslim woman as a transcendental subject of gender negating her immediate religious and political realities. Gender is always contingent; located historically, materially and socially. Under the current realities of Muslim existence in India, clamour for gender justice for Muslim women cannot exclude Muslim men as part of their community identity and as equal participants in their political destiny. The faith Muslims attempt to protect is not an ahistorical spirituality, but the spirituality whose symbolic markers are constantly wiped out and demolished from the face of the modern nation state.”

As a lawyer defending women’s rights, it is not my argument that Muslim women must continue to suffer gender unjust practices till broader community concerns are resolved. But the current political reality demands a more nuanced and pragmatic approach to address these injustices through multiple mechanisms available to Muslim women, both judicial and community based, rather than flaunting the violations, totally out of context, as a whip to beat the community with, as though gender injustice is the exclusive prerogative of Muslim men.

Flavia Agnes is a women’s rights lawyer based in Mumbai.