The Supreme Court has possibly awarded a tactical victory to the Modi government, but between the majority and the minority, the judges have also handed a strategic defeat to a political dispensation that has insolently conducted itself as if it was beyond constitutional norms and morality.

The Supreme Court. Illustration: The Wire

The most abiding ethical task before political and constitutional leadership is to ensure that the follies of 20th century do not get replicated in this 21st century. And the greatest folly of the 20th century, undisputedly, was the easy acceptance of emergence of absolutist regimes, anchored in the charisma and allure of authoritarian figures. Hitler, Stalin and Mao instigated deaths of millions and millions of their own citizens. In India we had to go through the obnoxious “emergency” and its ugly experiments in authoritarianism. Since then, we have assiduously insisted on chiselling out a constitutional morality that would definitely slow down the rise of another imperious figure.

It is in the context of this enduring ethical imperative to be on guard against an authoritarian dictator that the recent Aadhaar judgment has to be evaluated. Legal scholars will quibble among themselves about its meaning, but the historian has a simple question: Has the highest court in the land performed its sacred duty to safeguard us against a creeping Orwellian State? In particular, the enlightened citizen wants to be reassured whether the honourable judges were alert enough to the most pernicious aspect of this entire Aadhaar legislative business – the NDA government’s cannibalisation of the Money Bill provision of the Constitution to shut the Rajya Sabha out of a legitimate constitutional role? Has a potentially dangerous precedent been sanctified? Can a government with a simple majority in the Lok Sabha shut the Rajya Sabha and the president out of the legislative process by resorting to this “Money Bill” subterfuge? Has the door, albeit a backdoor, been opened for a majoritarian mischief?

The citizen has not been given much cause for comfort in the majority judgment, despite Justice Chandrachud’s resounding declaration that a constitutional fraud was committed when the Aadhaar Bill was palmed off as a Money Bill.

The majority view is plainly inflicted with a ponderous accountant’s professional timidity. Justice Sikri and his brother judges proceed on an apparent assumption that the government had most probably botched it up when it deliberately bypassed the restraint imposed on it by Article 110; but, the majority was now confronted with the painful choice of throwing out the baby with the bathwater of Section 57 (held void). In the event, the only saving grace in Justice Sikri’s judgment for the majority is a reassuring reiteration of the position that the speaker’s exercise of her power was a subject matter of judicial review.

There is a pointed reminder that the speaker of the Lok Sabha has been vested with a “constitutional trust”, an obligation that has to be undertaken in a non-partisan manner. More than a mere gentle rap on the knuckles for Sumitra Mahajan, this basic postulate has relevance for other constitutional functionaries like the president and the vice-president of the republic.

To the extent all judicial pronouncements do have political consequence, the Aadhaar verdict is by far a very consequential judgment. And while the Supreme Court did not throw out the Aadhaar Act lock, stock and barrel, it is necessary to note that both the majority and the minority views refute the Narendra Modi government’s arrogant assumptions of a maximum government.

These last four years the NDA government have proceeded on a self-serving conceit that a Lok Sabha majority had entitled it and its bumptious prime minister to act arrogantly, without any regard for the constraints provided for in the Constitution against a rampant executive. This presumptuousness, so central to the Modi regime, stands refuted. 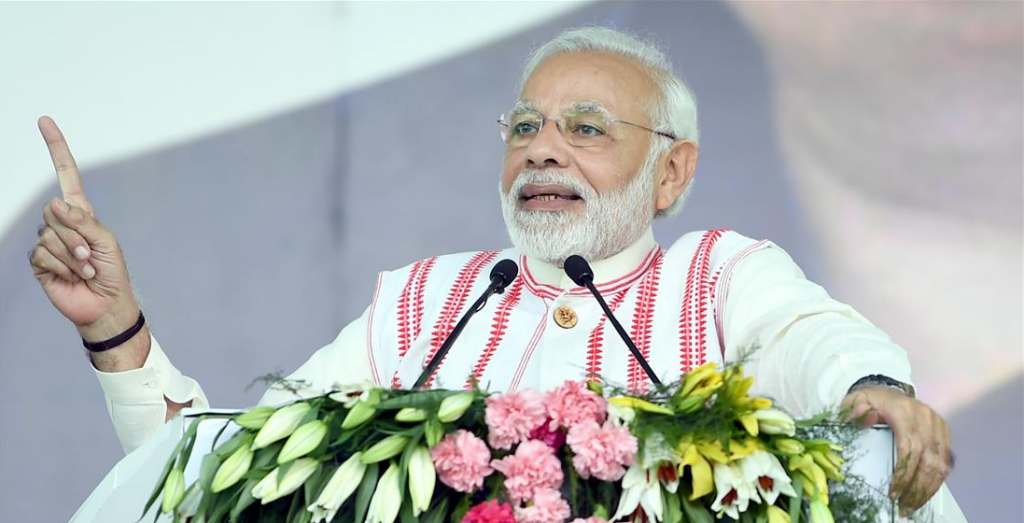 The NDA government has proceeded on a self-serving conceit that a Lok Sabha majority had entitled it and its bumptious prime minister to act arrogantly. Credit: PMO

A sobering meditation on notions of limited governance

Indeed, the majority view is a sobering meditation on the notions of limited government, and a definite no to arbitrariness that has now become the signature tune of the Modi government. The judges seem to be saying that whichever way you slice it, there is no licence for absolutism.

The majority opinion note that “the fundamental nature of the Constitution is that of a limiting document, it curtails the powers of majoritarianism from hijacking the State.” No one on the bench was buying the Modi establishment’s notions of maximalist state.

Scattered throughout are insights and observations which buttress the case for democratic accountability. Notions of constitutionalism, judicial review, separation of power and the concept of limited government are all vigorously reasserted. In other words, there is a ringing reaffirmation of all the Nehruvian tenets.

It should be a matter of considerable satisfaction that the bureaucracy has been forced to explain itself, rather than be allowed to retreat behind the inviolability of the “government knows best” doctrine. Take for example the UDAI. Not long ago, the overbearing babus of this “authority” were arrogantly threatening to throw the book at journalists for pointing out potential flaws and vulnerabilities in its humungous data bank; the same commissars were now made to explain themselves and address civil society’s concerns and questions.

The authoritarian leader and his designated agents seek to coerce the citizen into compliance and submission. The Aadhaar case was also about this itch to browbeat the citizen. And, for whatever it is worth, the majority took note of the attorney general’s “responsible” statement that any suggestion of a “mass surveillance of 1.2 billion people” was “an absurdity” and “an impossibility.”

Even though “legitimate state interests” and “ legitimate state aims” are recognised, these are to remain subject to test of proportionality. There is no acknowledgement of any concept of the emperor’s prerogatives.

And, Justice Chandrachund definitely earned for himself history’s gratitude for reminding us that “a ruling government has to work within constitutional parameters and has to abide by constitutional morality”. With an unusual clarity, he delineates that this constitutional morality does not change its tone or tenor with a change of government; after all, we do have “a system of checks and balances, which ensures governance by law and not by the caprice of those to whom governance is entrusted for the time being”. In the same breadth, he pronounces that “excesses of power” have to be curbed in an arrangement defined by constitutionalism.

The pith and substance of the Aadhaar verdict is that the bullies have been cautioned. The judicial impulses on display offer no solace to the proponents of the maximum leader doctrine. A good day for the republic.