The government should give serious thought to changing the misleading nomenclature of the Overseas Citizenship of India card holders. 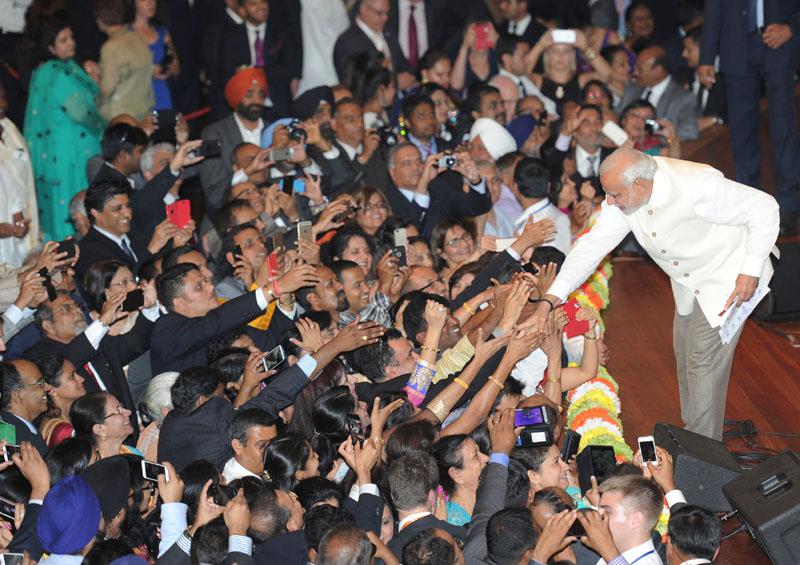 The Prime Minister, Shri Narendra Modi shaking hands with people at the Civic Reception, at City Hall, in Brisbane, Australia on November 16, 2014.

News of the deportation of Christine Mehta—an ‘Overseas Citizen of India’ and at the time a researcher with Amnesty International—has once again raised questions about the rights of this category of the Indian diaspora. Earlier this year, the Supreme Court had declined to entertain a PIL filed by a journalist seeking voting rights for OCIs. Reports have also surfaced from time to time of foreign citizens who acquired OCI status seeking the right to represent India at international sporting events. As far as Mehta’s case is concerned, former Home Minister P. Chidambaram has described her expulsion from India for conducting research without government approval as “ham-handed and illegal”.

The title ‘Overseas Citizen of India’ is itself rather curious. On the one hand, India clearly does not recognise dual citizenship. On the other, many foreign citizens of Indian origin possess cards that declare them to be Overseas Citizens of India. Without delving into the tomes written on the concept of citizenship and what being a citizen actually entails, suffice it to say that citizenship, broadly speaking, connotes a legal identity centred around political rights—a relationship of rights and duties with the state in addition to a sense of belonging with the land.

The concept of overseas citizenship was introduced in 2003 after the then Prime Minister Atal Bihari Vajpayee told  the inaugural Pravasi Bharatiya Divas that the government intended to permit ‘dual citizenship’ for PIOs from certain countries. To further this intent, the Citizenship Act, 1955 was amended to include provisions regarding overseas citizenship, and an OCI scheme was operationalised subsequently. Under the Act, certain persons, such as citizens of other countries who have at some point been citizens of India, their children, grandchildren and great grandchildren are eligible for registration as OCIs (amongst others).

Less than citizens, more than tourists

Although OCI status was commonly referred to as dual citizenship, the Citizenship Act has refrained from referring to it as such (although the Statement of Objects and Reasons in the amendment that introduced OCI provisions refers to dual citizenship). Leaving aside the Statement and the improper usage of the term ‘citizen’ for OCI cardholders, the Citizenship Act has been fairly clear, right from the start, that being registered as an OCI is very different from being a citizen of India. Under the Act, an OCI cardholder is entitled only to such rights ‘as the Central Government may, by notification in the Official Gazette, specify in this behalf’.

The Act additionally lists out certain rights that are not, and cannot be made, available to an OCI. These include the right to equality of opportunity in public employment, the right to be registered as a voter, for appointment to public services, and for election/appointment to certain Constitutional posts. Some of these rights—the right to vote in particular—are arguably what define a citizen.

Over the years, certain rights have been given to OCI cardholders through government notifications, for instance, the grant of a multiple entry life-long visa for visiting India for any purpose, and exemption from registration with the Indian authorities for any length of stay (other foreigners are subject to such registration requirements).

OCIs are thus free to enter India and stay for as long as they like. However, whether they can do as they like is a different question altogether. OCIs have been granted parity with NRIs in respect of practising specified professions in India (medicine, law, architecture, chartered accountancy, etc.) in pursuance of the provisions contained in the relevant Acts. Other than any specific restrictions that they may be subject to under the relevant Acts governing the specified professions, there are other general limitations on the activities that OCIs can pursue in India.

Indeed, Mehta’s deportation has brought to the fore the restricted rights that OCIs and PIOs enjoy compared to citizens. Mehta was a PIO working with Amnesty International India as a researcher on a project in Jammu and Kashmir. Earlier, registration for PIOs was separate from OCIs and the former were allowed for 15-year long visas. Now the rules for OCIs and PIOs have been merged and PIOs have been reclassified as OCIs. Mehta was asked to leave the country in November last year. By her own admission, OCIs and PIOs are specifically prohibited from undertaking research without the prior permission of the Government of India and she had not sought specific permissions for her project.

OCIs are also not permitted to undertake any missionary work or mountaineering without permission, and are, like foreigners, prohibited from visiting ‘protected areas’ without permits.

A slightly murky issue concerning OCI rights has been their eligibility to participate in international sporting events under the Indian flag. OCIs have been allowed parity with NRIs in respect of all facilities available to them in economic, financial and educational fields but there is no specific reference to sporting activities. While holding that an OCI could not claim a right to represent India at a sporting event, the Delhi High Court in 2010 stressed upon the limited nature of rights available to OCIs, observing that only those rights that are specifically granted by a government notification are available to them, and that the government might, depending on the circumstances, change its policy and decide to withdraw a right granted to an OCI through a notification.

Given the limited nature of their rights, it is unsurprising to note that an OCI’s registration can be cancelled at any point by the government on certain grounds, including if it is necessary in the interest of sovereignty and integrity of India, security of India, friendly relations with foreign countries, or in the interests of the general public. As the Bombay High Court ruled in 2008, there is also no requirement for a pre-decisional hearing to be allowed to an OCI at the time of cancellation of registration.

Registration as an OCI certainly helps a person of Indian origin forge or re-establish a connection with India despite not being a citizen. The general permit to enter and stay in India allows an OCI to make multiple visits throughout her life without the hassle of applying for separate visas. That said, OCIs are hardly citizens and the Government of India ought to have conferred Overseas Indians with a more creative title than one perpetrating the misnomer of citizenship.

Sreenidhi Srinivasan is with the Vidhi Centre for Legal Policy. Arghya Sengupta provided inputs for this article.