The Ayodhya Verdict Is the Victory of Secularism

A reading of the judgment clearly shows disapproval and disavowal of the mob that demolished the Babri Masjid. 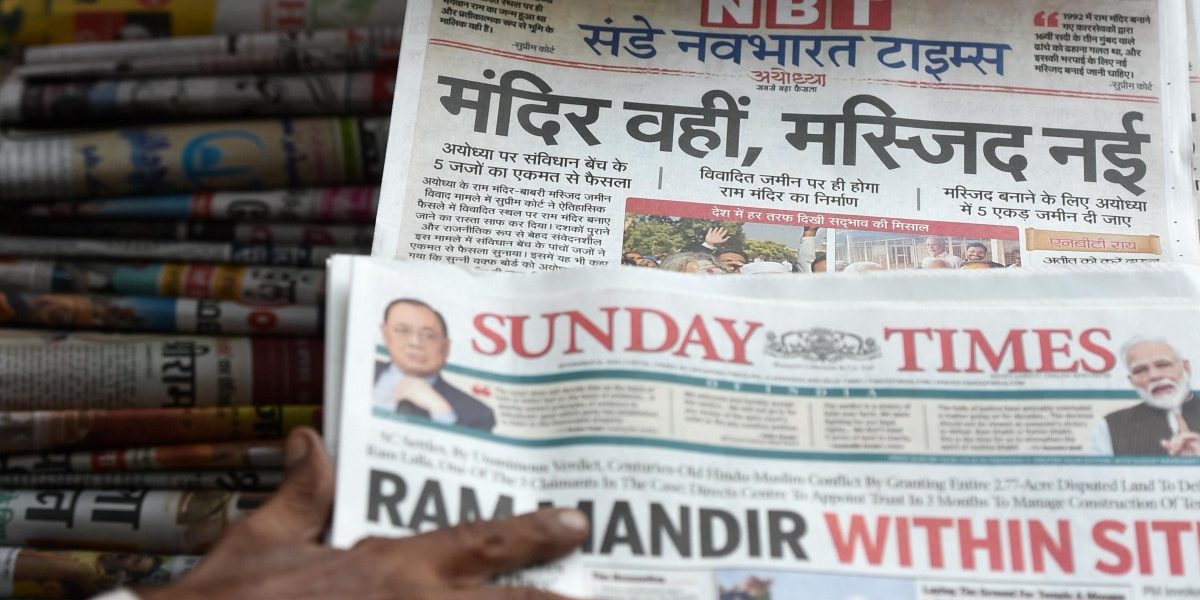 Newspapers being sold in New Delhi a day after the Ayodhya verdict. Photo: PTI

Secularism is a concept that is readily understandable to those of a Left or a liberal persuasion, or to members of minority religious groups, whose rights and lives are inextricably intertwined with this political concept. To the social Right, secularism is anathema – but adherents of right-wing ideologies do understand and engage with it, if only to oppose it.

The Ayodhya judgment passed on Saturday by the Supreme Court has attracted much comment. While the conclusions drawn in that judgment, when based on the evidence cited in it, may seem inexplicable, the fact remains that the judgment has been passed and is here to stay.

For a case that has been heard for more than 40 days, there seems to be not much point to a review petition, as review petitions are essentially maintainable for errors apparent from the record. It is a safe assumption that the judges in such a case would have passed judgment after much deliberation and it is unlikely that any part of the judgment will be amount to an ‘error apparent’. A large number of people feel that this judgment is fair and a larger number feel that the issue needs to be put to rest now. That being the case, one principle that this judgment stands for needs to be celebrated.

This is a dispute which has literally cost thousands of lives, not to mention the massive economic loss that accompanied the many riots and conflagrations. It has, however, been resolved through a process of adjudication, regarding the conclusions of which there may certainly be misgivings, but the judicial process was established as a fair one. Each side got all the opportunity they required for presenting evidence and for arguing their side. With the Vishwa Hindu Parishad already expressing its intention to next take up the issue of the mosques at Varanasi and Mathura, the judicial process in this case needs to be celebrated as a victory of the secular process.

None of this is to say that the judgment must not be criticised. Criticism of court judgments is a healthy democratic practice. It is the principle of the inviolability and inevitability of the legal process that has to be protected and projected. The verdict needs to be presented popularly as a benefit of secularism, as per which a temple will be built at long last, but without any bloodshed or acrimony. This has to be an example for any such future movement or demand, that the movement has to appeal to the state and its instrumentalities for justice and not to the streets.

The opponents of secularism in India, the Bajrang Dal, the VHP and the RSS as well as Islamist groups, all believe in street politics. While the state is quick to act against Islamist groups, the large Hindu majoritarian groups have the support, often active and obvious, of the government. This phase will also pass, but for it to pass, the state and its instrumentalities have to turn out stronger than the political ideologies of the political party which governs them. For this to happen, secularism has to become a non-negotiable feature of the Indian system.

The current ruling dispensation has made it a habit to deride secularism and secularists as clueless do-gooders or worse. This nefarious propaganda has succeeded only because secularism has been reduced in discourse to an opinion poll on the popularity of Muslims. Secularism is so much more, it is the triumph of rationality over unthinking fear, it is the emancipation of women and the upliftment of the oppressed. Secularism means social justice, and in the midst of RSS-fuelled propaganda, that meaning has been lost. The attack on secularism succeeds because, for most apolitical Hindus, it is an irrelevant concept.

They do not want riots, lynchings or disenfranchisement of minorities. Yet, their assent is obtained, at the time of elections, by couching bigotry in terms of national interest and national security. A narrow, Muslim-centric understanding of secularism is doomed to fail. Secularism as a progressive, scientific rationale for equality will have many more takers.

The Ayodhya judgment did result in a victory for the majority and coincidentally for the mob that demolished the Babri Masjid, but a reading of the judgment clearly shows disapproval and disavowal of the mob. The legal victory is based upon secular principles. This has to be the projected as the victory of secularism.