AAP’s 'OoPs' Moment: Kejriwal Has No Option But to Fight It Out in Court

The test should be the terms on which the office of profit is accepted, not what it has to offer. The parliamentary secretaries clearly do not occupy offices of profit. These posts are neither offices nor do they yield profits.

Arvind Kejriwal, a social activist and anti-corruption campaigner, gestures as he speaks during an interview with Reuters in Ghaziabad on the outskirts of New Delhi October 22, 2012. From a shabby house in one of New Delhi's grimmest suburbs, a mild-mannered former tax official has launched a salvo of accusations of corruption involving some of India's most powerful people, rocking the political establishment. Picture taken October 22, 2012. To match INDIA-CORRUPTION/KEJRIWAL REUTERS/Mansi Thapliyal (INDIA - Tags: POLITICS) - RTR39R6Z 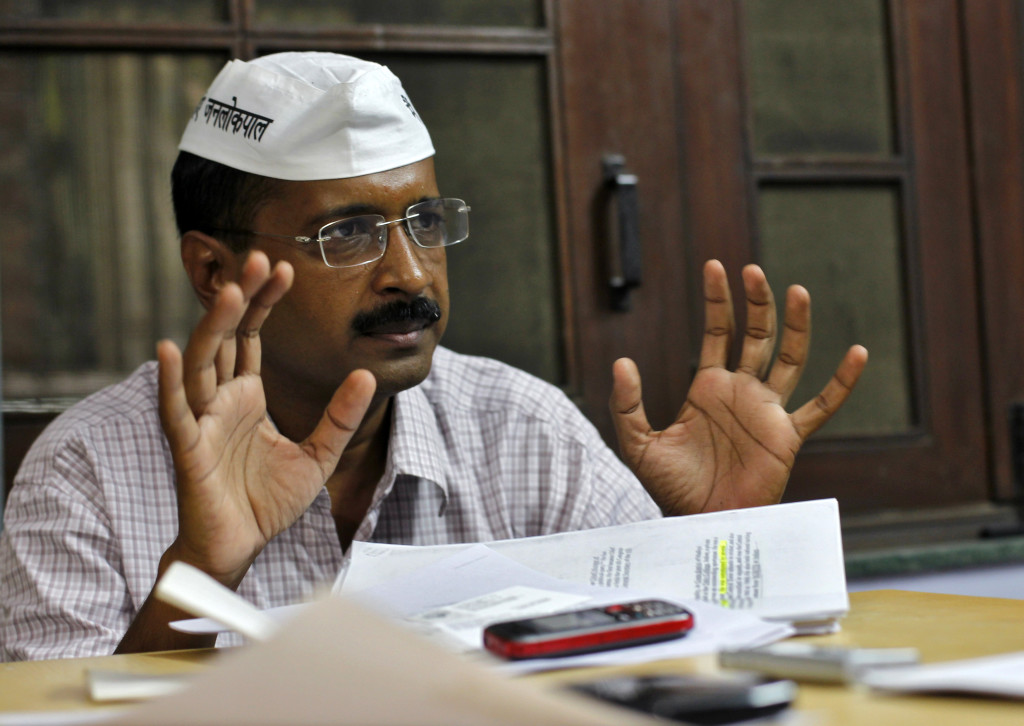 The Aam Admi Party (AAP) has been accused of creating ‘offices of profit’, and 21 of its members in the legislative assembly now face the prospect of disqualification.

Two constitutional commandments are involved in this. The first – Article 102 (1) (a)  – disqualifies legislators who hold an office of profit. This is replicated under the Government of National Capital Territory of Delhi (GNCTD) Act 1990, Section 15 (a). The second is a ‘cap’ on the number of cabinet ministers.

The simple principle is that no legislator can perform his or her legislative function if he or she holds an office of profit under any government; doing so compromises their independence and integrity. You cannot serve two masters: the people (as a legislator) and the government (as an indebted office of profit holder with vulnerable perks liable to be arbitrarily taken away).

AAP members are famous for wearing caps. In better, one could even say the good old, days, Shanti Bhushan used to wear his cap in the corridors of the Supreme Court with pride and without prejudice.

But now a different kind of ‘cap’ has confronted the AAP.  The Constitution (91st) Amendment of 2003 put a cap of 15% on the number of cabinet ministers; anything in excess would invite disqualifications. But, taking into account small legislatures, the minimum was 12. For Delhi, the permissible number of members of cabinet is 10% of the assembly’s strength (that is, seven ministers).

The allegation against the AAP is that 21 members were made parliament secretaries. This is, in a sense, a double whammy: a violation of the cap and the holding of offices of profit. Whether the cap extends to parliamentary secretaries remains legally unresolved. While the House of Commons sees this as an apprenticeship, in India, these appointments are socially and politically seen as a ‘perk’: cabinet ministers by any other name are still cabinet ministers. The practice is hugely prevalent in Rajasthan, Goa, Punjab, Haryana, Karnataka, West Bengal and Arunachal Pradesh. The guilty chief ministers include now Prime Minister Narendra Modi, when in power in Gujarat, Vasundhara Scindia and Ashok Gehlot of Rajasthan and Mamta Banerjee of West Bengal, among others. The Bombay, Calcutta and Andhra Pradesh high courts have found this practice violative and the Punjab and Haryana high court is examining the issue.

However, there is a difference between the provisions for parliament and state legislators and the Delhi assembly. In the case of the former, cabinet ministers (in the form of secretaries to ministers) in excess of the ceiling are to be disqualified, while no such provision has been made for the Delhi assembly (Article 239AA-4).

Thus, the AAP’s cap is partially ‘safe’. While a court may hold that the appointment of 21 ‘parliamentary’ secretaries violates the 10% rule and order that they can no longer hold this office, these 21 legislators cannot be disqualified because of exceeding the ‘cap’. No wonder chief minister Arvind Kejriwal has not been provoked with respect to this aspect of the matter.

Offices of profit, the simple way

What about the question of offices of profit? The easy route Kejriwal chose to make his appointments safe was prescribed by parliament. Section 15 of the GNCTD Act proscribes offices of profit under the Union, state or union territory, unless such office-holders have been declared by a law of parliament, state, union territory or the Delhi legislature to be immune from disqualification. Kejriwal sought the easy way by using his majority in the assembly to assert that these 21 legislators would not be disqualified.

The path for this was cleared by Sheila Dikshit’s Delhi Members of Legislative Assembly (Removal of Disqualifications) Act 1997, to protect the appointments of the chairman of the Delhi Khadi and Village Industries Board and the chairman of the Delhi Commission of Women as long as they got no remuneration other than “compensatory allowance which included daily allowance (upto the limit of an MLA), conveyance, house rent or travelling allowance which he could recoup [as] incurred by him in performing the functions of his office”. These provisions are, of course, ridiculously wide. Would they include the allocation of an official residence? Whether these constitute an ‘office of profit’ remains an open question. Dikshit’s legislation should simply have saved those offices and not the perks.

Kejriwal obviously thought that what was legally good for Dikshit was good for him too. What strengthened his hand was that Dikshit’s Act had already been enlarged to include secretaries to the chief minister, whom Dikshit wanted to ‘save’ without going further. So, secretaries to the chief minister were already included by ‘law’ and beyond dispute. Kejriwal’s strategy was to not pass a new enactment de novo but simply tweak the existing provisions so that after the words ‘chief minister’, the words ‘and minister’ were added. This meant that secretaries were permissible not just for chief ministers but all ministers, and these posts could not be deemed ‘offices of profit’. This was a simple addition to which the lieutenant governor, Najeeb Jung should have acceded. Instead, he reserved the matter for the president and the president denied assent.

This denial of assent is based on wrong constitutional practice. Though governors and LGs  have been doing so for long, the practice of reserving a Bill for the president is an arbitrary one. Once reserved, they are often forgotten in Rashtrapati Bhawan. In this case, presidential assent has been refused without any reason being given.

Jung’s power to reserve a Bill for presidential assent is given by the GNCTD Act 1991 (Section 24).  The specific areas the LG must reserve for presidential assent are broadly the following: questions relating to salaries and allowances fixed for the speaker and deputy speaker, and the salaries and allowances of legislators by the assembly and of ministers; questions affecting the official language used in the assembly, and finally, situations where the LG thinks the high court’s role and powers might be affected. Surely the LG should have no discretionary power (under Section 24) other than what has been explicitly enumerated in the law itself. Yet, in practice, his powers appear untrammelled.

We have the right to demand to know on what basis Jung reserved this Bill for President Pranab Mukherjee. Was it a discretionary or compulsory reference? If discretionary, we must know why, because the LG should not have a pocket veto. But if compulsory, because it affects salaries and perks, the invocation is clearly overbearing and excessive. After all, the Bill of 2015 does no more than add the term ‘minister’ to a 1997 law that has already received assent. Equally, the definition of ‘compulsory allowance’ in the 1997 Act, which covered perks, was already in the Bill.

As far as Jung is concerned, his intention is only to embarrass the AAP government and its legislators. As far as Mukherjee is concerned, he is also party to this harassment. Both are ambitious men and have their own agendas. Jung wants more and Mukherjee wants at least another term. We are entitled to know why this reference was made by Jung and cosily disapproved by Pranab. This is a public issue that goes beyond stumping the AAP government and legislators.

Offices of profit, the complex way

As is now clear, the apparently easy route Kejriwal chose has not helped the AAP’s 21 legislators. The 21 legislators, if judged to be holding an office of profit, would be disqualified, resulting in elections to fill their seats. In the Waqf case (2008), the Supreme Court allowed a removal of disqualification to be retrospective because the specific words added were that the chairman of the board “shall be deemed never to have been disqualified”. No such provision is made here. The question then boils down to a simple one: are these really offices of profit?

The issue takes us back to the various reports of the Bhargava Committee (1954), the Joint Committee Report (1958), the Parliament Prevention of Disqualification Act (1959) and the Joint Committee on Office of Profit. At present, parliament is governed by the 1959 Act, which was amended in 1998, 2000 and 2006. This leaves a lot of discretion for a parliamentary conspiracy of agreement to exclude disqualifications. Such is the real looseness of these provisions.

But since the AAP’s route in this regard has been blocked and would not be retrospective anyway, we cannot avoid examining the party’s options. In the Insurance Panel Doctor case (1976), Justice Krishna Iyer felt that a more balanced view must be taken:

“Doctors, lawyers, engineers, scientists and other experts may have to be invited into local bodies, legislatures and like political and administrative organs based on election if these vital limbs of representative government are not to be the monopoly of populist politicians or lay members but sprinkled with technicians in an age which belongs to technology.”

The case law is endless, and Iyer’s wisdom has since been diluted. The courts have been extraordinarily confused. In Hegde’s case (1993), the Karnataka high court decided that a deputy chairman of the Planning Commission who could have, but did not, take any salary was saved from disqualification. Alas, the Supreme Court was not so indulgent to Jaya Bachchan in 2006: the test was that her office (chairman of the UP Film Development Council, with the status of a cabinet minister) was “capable of yielding a profit of pecuniary gain”. The Election Commission disqualified her as a member of the Rajya Sabha and the Supreme Court agreed.

However, it is mechanical to ask if the office is one of profit. The test should be the terms on which the office of profit is accepted and entered into, not what it has to offer. It is then, and only then, that Iyer’s dictum would make sense to invite pro bono participation in public offices. We need not take this part of the controversy further.

In the present case, the secretaries to the minister clearly do not occupy offices of profit. Such offices must be held externally under the government, not within parliament or the assembly. Arrangements relating to MLAs’ or MPs’ parliamentary work deserve to be excluded, as these are legislative arrangements. A legislator who accepts such an office is obviously subject to removal. But that would not, in principle, make it an office of profit.

Further, the concept of compensatory allowance is alien to an office of profit. The principle – as stated in the Delhi Act –permits compensatory allowances. This is not directly applicable because the president blocked the Bill. But such a view is consistent with Shibu Soren’s case (2001) that an honorarium was profit and not a compensatory allowance. The AAP’s position on this states: “These parliamentary secretaries will not get any remuneration or perks of any kind, from the government – meaning no burden on exchequer.” These posts are neither offices nor do they yield profits.

The AAP has two ways to deal with this. The first is the Sonia Gandhi-Jaya Bachchan route, to resign and return through a by-election, even though Bachchan lost her disqualification case first. But this would be precarious for Kejriwal. It would mean inviting a mini-election in which he may not do so well. Therefore, he will have to take the second option, of waiting for the Election Commission’s decision and then challenging the decision if adverse to the party.

Rajeev Dhavan is a senior advocate in the Supreme Court.