In a hurriedly convened special hearing, the CJI denied the allegations and said the independence of the judiciary is under "very serious threat".

New Delhi: Chief Justice of India Ranjan Gogoi on Saturday denied the sexual harassment charges levelled against him by a former Supreme Court employee and said that there was a “bigger plot” to deactivate the office of CJI.

The Supreme Court held a special sitting on Saturday after three news organisations –  The Wire, Caravan, Scroll and the legal website, The Leaflet – reported the allegations against CJI Gogoi. In a notice posted soon after the stories went live at 9:30 am, the Supreme Court registry said a three judge bench comprising the CJI, Justice Arun Mishra and Justice Sanjiv Khanna would deal with a matter of ‘great public importance touching upon the independence of judiciary.’ 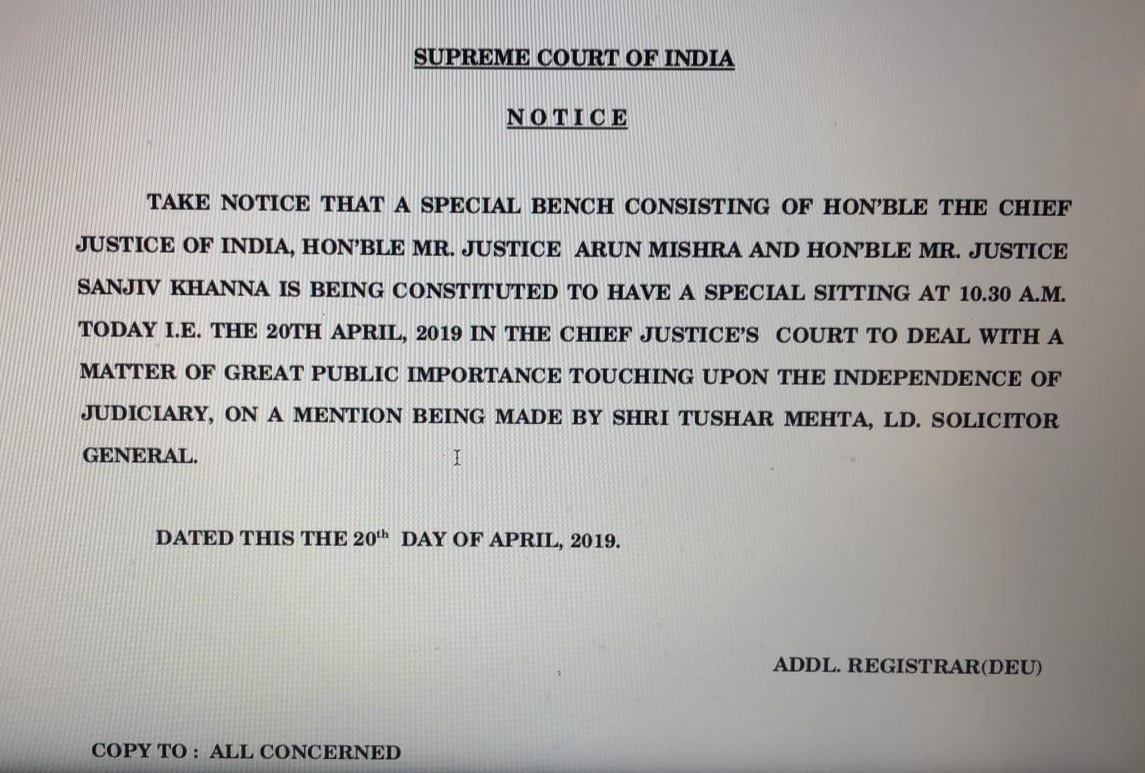 Earlier, in an email sent at 3:37 am on Saturday, the CJI had denied the allegations through the Supreme Court’s secretary general. In court, he reiterated the same on Saturday, saying “every employee is treated fairly and decently”. “This employee was there for a month and a half. Allegations came and I didn’t deem it appropriate to reply to the allegations,” LiveLaw quoted Justice Gogoi as saying.

Justice Gogoi said the woman who has raised the allegations has two FIRs against her and that he has asked the Delhi police how she was able to enter the Supreme Court service with a pending criminal case.

The Chief Justice also said that there was a “bigger plot” by unnamed persons to “deactivate the office or [the] CJI”.

I don’t think that this can be of a plot of junior assistant. There is a bigger plot. They want to deactivate the office or CJI

The state has filed an application to cancel the woman’s bail, which will be heard on Saturday at the Patiala house court.

Later, the CJI said that after “20 years of selfless service” he has a bank balance of only Rs 6.8 lakh. “No judge is going to decide cases if this is the kind of attack we get. Reputation is only thing we get. Even that is attacked,” he said.

According to LiveLaw, Justice Gogoi said the “independence of judiciary is under very very serious threat” and that if judges have to “work under these conditions, good people will never come to this office”.

He added, “I have to say this to the citizens of the country, judiciary of the country is under serious threat. But regardless of that I’ll continue to function.” He concluded by saying that the matter would be considered by senior most judges and not by him.

Speaking later, Justice Arun Mishra said, “How can we function if there is no faith in the system?”

Attorney general K.K. Venugopal said that under Section 16 of the Sexual Harassment Act, names cannot be published at all. “Here names were published,” he said referring to the reports published by the four media organisations. However, the woman has not filed a complaint before the sexual harassment committee. According to legal experts, confidentiality is applicable only during proceedings of an enquiry under the Act.

Venugopal added that as an officer of the court, he has also come under attack. “I am being attacked for defending the government,” he said, according to LiveLaw.

At the end of the brief hearing, the bench did not pass any judicial order. Justice Mishra, said, “As my lord CJI is sitting we are not passing any judicial order at the moment. It is the wisdom of the media to publish it or not.”

Later, however, a bench of Justice Mishra and Justice Khanna issued a brief order effectively advising the media “to take off such material which is undesirable”:

“Having considered the matter, we refrain from passing any judicial order at this moment leaving it to the wisdom of the media to show restraint, act responsibly as is expected from them and accordingly decide what should or should not be published as wild and scandalous allegations undermine and irreparably damage reputation and negate independence of judiciary. We would therefore at this juncture leave it to the media to take off such material which is undesirable.”

The order notes that the case is a suo moto writ petition (civil) in a “Matter of great public importance touching upon the independence of judiciary” and mentioned by solicitor general Tushar Mehta.

‘Judge in his own cause’

Though Justice Gogoi was not part of the bench which issued this order, the CJI’s decision to preside over a court that discussed an allegation against himself was criticised by senior advocate Dushyant Dave. “This is the saddest day for the judiciary and the country,” he told the Wire. “The CJI had done great disservice to himself and the Supreme Court in presiding over a bench to hear a non-existent matter and to scotch the allegations, against himself, even if false. What is more sad is that the learned attorney general and solicitor general did not advise him correctly and joined in this rather unfortunate turn of events.”

Dave said he had no doubt the allegations against the CJI “will be found to be false but they must be so found after an independent inquiry and not in this manner.”

He added, “No one can be a judge in his own cause, not even the CJI. Judicial power can’t be used in this fashion.”

If at all, he said, the chief justice could have gone to the press and explained his position “and the nation would have judged him thereupon.”