The SC said that information regarding the setting up of the Justice S.A. Bobde-led in-house committee may amount to unwarranted invasion of privacy and breach of fiduciary relationships. 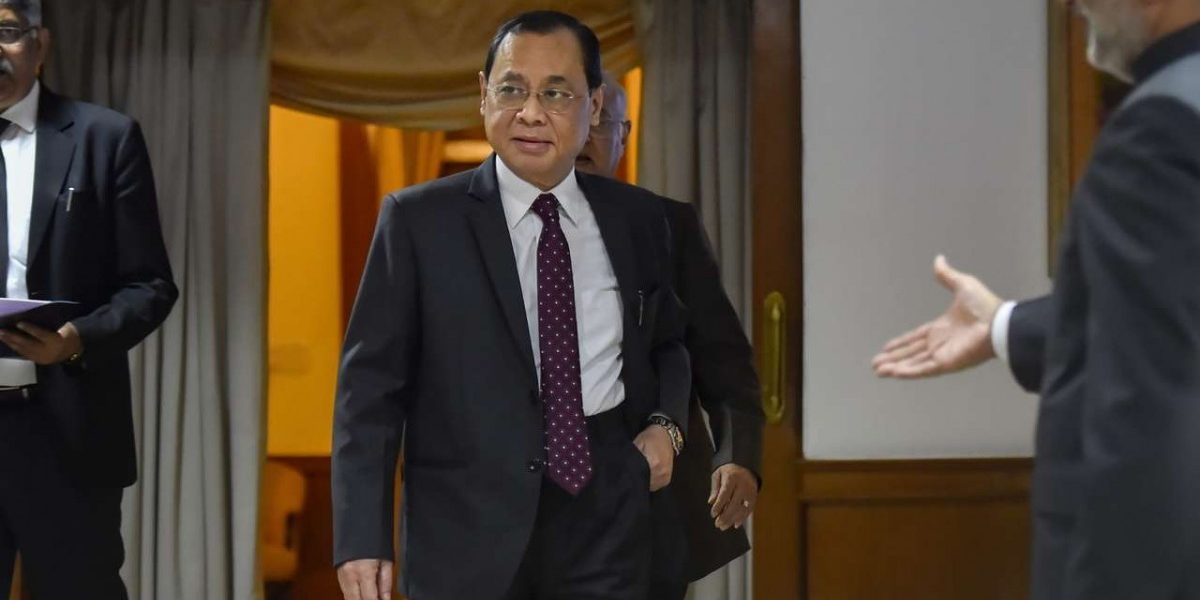 New Delhi: The Supreme Court has refused to share any information about how it resolved a former employee’s sexual harassment complaint against former Chief Justice of India Ranjan Gogoi, RTI documents with The Wire show.

In replies to queries filed by RTI activist Anjali Bhardwaj, the Supreme Court said that information regarding the setting up of the Justice S.A. Bobde-led in-house committee which probed the allegations of sexual harassment against Justice Gogoi and the induction of Justice Indu Malhotra as its third member in place of Justice N.V. Ramanna may amount to unwarranted invasion of privacy and breach of fiduciary relationships – and hence compromise the independence of the judiciary.

c) a copy of any terms of reference, mandate, rules, guidelines etc governing the committee’s functioning

d) the date on which the committee’s report was submitted to the Supreme Court.

Replying to her RTI, the court’s additional registrar and chief public information officer, Ajay Agrawal, said that the information sought in the first two points can’t be provided in view of  the “independence of judiciary, proportionality test, fiduciary relationship, invasion of the right to privacy and breach of duty of confidentiality etc. with reference to provisions of Sect i on 8(1)( j) and Section 11(1) of the RTI Act, 2 0 0 5, which are applicable in the present matter”. 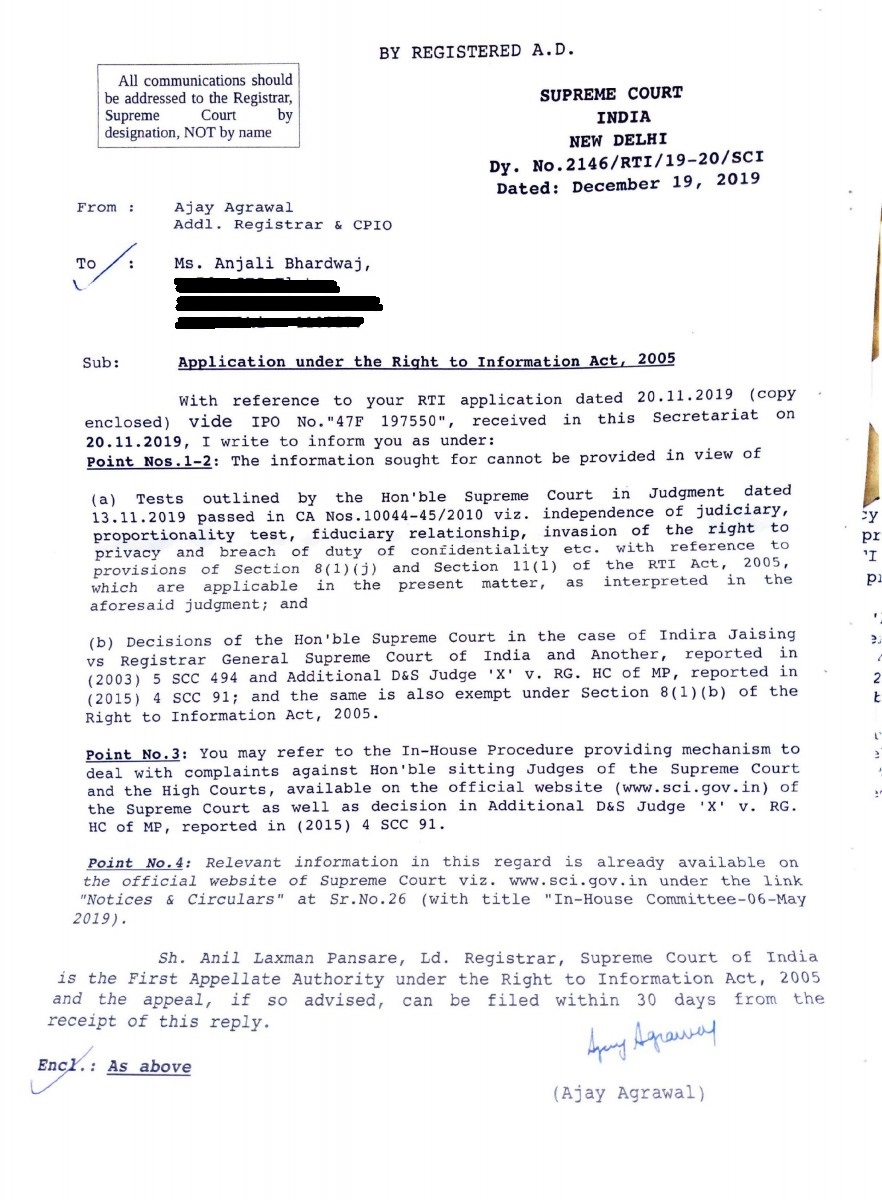 The reply to the RTI application filed on November 20.

Regarding the guidelines and terms of reference for the committee, Agrawal directed Bhardwaj towards the in-house procedure laid down to deal with complaints of sexual harassment against sitting Supreme Court and high court judges.

Speaking to The Wire, Bhardwaj said, “Although general details about the in-house procedure are available on the court’s official website, the procedure is completely silent on what is to be done if the complaint is against the CJI. In fact, the CJI is the point person who is supposed to enforce what emerges from the process. The complaint against the CJI was an exceptional case and that is why I sought the information from the Supreme Court.”

As far as her fourth question was concerned, Agrawal said that the Justice Bobde committee’s report was submitted to the court on May 5, 2019. The notice which is available on the SC’s website says that Justice Bobde submitted the report to “the next senior judge competent to receive the report” and also to the then CJI Ranjan Gogoi, against whom the complaint was made.

It further says that the committee found “no substance in the allegations” and the report was not liable to be made public as part of the in-house procedure and upheld by Indira Jaising vs Supreme Court of India and Anr (2003).

In another RTI application filed by Bhardwaj on November 20, 2019, Agrawal cited the same case to refuse sharing the Justice Bobde report. The reply to the RTI on the committee led by now CJI Bobde.

She said that she will be filing an appeal against the SC’s first responses soon. “This has been a very murky case – right from the time when the former court assistant filed her complaint, the way she claimed she was victimised, then reports emerging about the poor handling of her complaint by the both the court and CJI. Everything was hush-hush”

Soon after the Bobde committee was formed, the complainant had raised multiple concerns about the conduct of the committee, and finally decided to withdraw from the inquiry, citing lack of sensitivity.

“Refusing to give information on such a high-profile case undermines public trust in the hallowed institution. The only way for the Supreme Court to show that justice was done in the case is to come out with its details in a fully transparent way.”

“I am not insisting on information which is exempt. We are merely asking basic questions. The Supreme Court could have blackened portions which they thought violated privacy concerns but a blanket denial of how it went about resolving the complaint surely cannot be justified on the grounds of not wanting to invade anyone’s privacy,” Bhardwaj said.

Justice Chandrahud’s letter “not on record”

The Supreme Court also refused a third RTI request Bharadwaj filed, one concerning the Indian Express’s report last May of Justice D.Y. Chandrachud having written to the Justice Bobde committee requesting that it not decide the matter ex parte, in the absence of the complainant’s cooperation. The RTI reply regarding a copy of the letter by Justice Chandrachud.

“Going by media reports, I had also asked for a copy of Justice D.Y Chandrachud’s letter to the committee to look into the complainant’s allegations against Justice Gogoi but I was also refused information on that RTI,” said Bhardwaj.

Bhardwaj got a reply from the SC that the letter was not on record, and it could not share any information regarding it. “That the letter is not on record is very off. Obviously, he would have written a letter to the judges in his capacity as a sitting judge,” Bhardwaj said.

The Indian Express had reported that Justice Chandrachud had urged the in-house committee probing the complaint against the CJI to not proceed with the inquiry ex-parte as it could damage the court’s reputation.

Justice Chandrachud’s letter was handed over on May 2, the Indian Express reported.

The same story also claimed that he, along with Justice Rohinton Nariman, met with the in-house inquiry committee on May 3

The Supreme Court issued a press release on May 5, 2019 in the name of its secretary general which took note of the Indian Express story but denied only the claim that two judges had met the Bobde panel on May 3:

“It is most unfortunate that a leading newspaper has chosen to state that Justice R.F. Nariman and Justice D.Y. Chandrachud together met Justice S.A. Bobde on Friday evening i.e on 3rd May 2019. This is wholly incorrect. The in-house committee which is deliberating on the issue concerning [the] Hon’ble Chief Justice of India deliberates on its own without any input from any other Hon’ble judge of this Court.”

However, the Supreme Court’s press release last year did not contest the claim that Justice Chandrachud had written a letter to the three judges.

So if it did not deny Justice Chandrachud had written a letter, it is not clear why the additional registrar now says the court has no record of it.