In Prashant Bhushan's Contempt Case, an Issue of Procedural Fairness Comes to the Fore

Prashant Bhushan has filed a fresh application seeking his right to lead evidence under the Contempt of Courts Act, 1971. 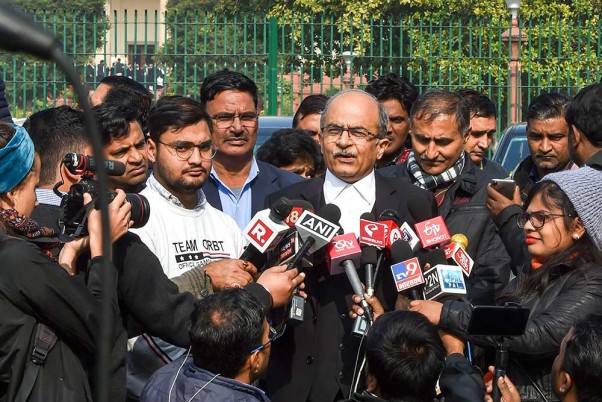 With the Supreme Court reserving its order in the suo motu contempt case against Prashant Bhushan on Wednesday after a detailed hearing, one would have thought nothing much remained in the case, except for the order.

But Bhushan’s fresh application filed in the Supreme Court on Thursday points to a procedural lacuna in the case, which was not discussed adequately during Wednesday’s hearing. Therefore, it requires the bench’s indulgence in order to ensure procedural as well as substantive justice.

In his fresh application, Bhushan first draws a distinction between his first and second tweet.

The first tweet regarding the Chief Justice of India S. A. Bobde on a bike was posted on June 29, and was the subject of Mehak Maheshwari’s petition, which got converted into the suo motu contempt case. 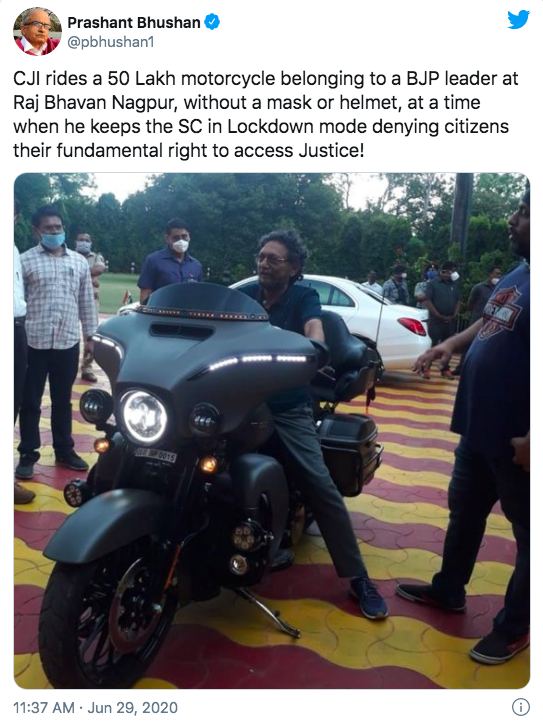 Bhushan’s second tweet, regarding ‘destruction of democracy’ which was dated June 27, was mysteriously published in the Times of India on the morning of July 22, based on which the Supreme Court-issued notice to Bhushan. Bhushan claims that the second tweet constitutes a separate cause of action and that the court having taken cognisance of the second tweet is required to initiate it as a separate proceeding. Bhushan’s senior counsel, Dushyant Dave made this point orally during the hearing on Wednesday.

In his application filed on Thursday, Bhushan makes the point that the proceedings regarding the second tweet are required to be placed before the CJI who is the master of the roster for allocation of benches.

Bhushan, to support his contention, has cited the Supreme Court’s judgment in Vijay Kurle. In this case, after taking cognisance and issuing notice to Kurle and others in a pending contempt matter against advocate Mathews J. Nedumpara, another bench of the court placed the matter before the CJI for allocation of the bench.

In Paragraph 39 of Vijay Kurle, the court held:

“If an article, letter or any writing or even something visual circulating in electronic, print or social media or in any other forum is brought to the notice of any Judge of this Court which prima facie shows that the allegation is contemptuous or scandalises the court then that Judge can definitely issue notice and thereafter place it before Hon’ble the Chief Justice for listing it before an appropriate Bench.”

Maheshwari’s petition was placed before Justice N.V. Ramana, as the CJI, as master of the roster, could not have dealt with it administratively, because it concerned a tweet about him. As second in seniority, Justice Ramana assigned the case to a Justice Arun Mishra-led bench.

Similarly, the second tweet too must have been placed before Justice Ramana, for bench assignment, as it referred to the role of the last four CJIs, including the present.

Secondly, Bhushan has complained about having been denied a copy of Maheshwari’s petition on the basis of which the notice was issued to him. This was in violation of Rule 6(2) of Rules to Regulate Proceedings for Contempt of the Supreme Court, 1975 framed under Article 145 of the constitution which provides:

“When action is instituted on petition, a copy of the petition along with the annexure and affidavits shall be served upon the person charged”. (emphasis supplied by Bhushan)

According to Bhushan, the word “action” here includes the conversion of Maheshwari’s petition to suo motu petition when it came to the first tweet. The words “shall be”, according to him, vests an undiluteable right in him. This right vests in him even under suo motu proceedings under Article 129, because Rules have been framed under Article 145.

Bhushan, therefore, contends now that if his preliminary reply submitted earlier explaining why the notice was not sustainable is not acceptable to the court, then he would invoke his right to lead evidence under Section 17(5) of the Contempt of Courts Act, 1971.

Relying on case law, Bhushan also contends that contempt proceedings are quasi-criminal in nature. Standard proof applicable is, therefore, that of proof beyond reasonable doubt, he has underlined.

The two setbacks so far

Wednesday’s proceedings in the Supreme Court  must be viewed against the backdrop of two legal setbacks which Bhushan has already suffered.

First, the bench of Justices Arun Mishra, B.R. Gavai and Krishna Murari, dismissed his writ petition (W.P.[c] 792 of 2020) seeking recall of the contempt notice issued to him by the Secretary General of the Supreme Court. The bench dismissed the petition without any reasoning, and therefore, its action is least convincing.

Second, it has now emerged that the Supreme Court’s registry’s rejection of the impleadment application filed by 16 civil society activists in the case on Tuesday may perhaps be flawed. The application filed on behalf of civil society activist, Aruna Roy and 15 others with varying backgrounds in their respective fields of work was rejected by the court’s registry, although they claimed violation of their rights under Article 19(1)(a) of the constitution, insofar as it causes a chilling effect on the exercise of the right to free expression.

The court’s registry, to support its rejection of the impleadment application, relied on the observations of the Supreme Court in C.S.Karnan, as follows:

“5. Since contempt proceedings are a matter strictly between the Court and the alleged contemnor, anyone who enters appearance and disrupts the proceedings of this case in future, should understand that he/she can be proceeded against, in consonance with law.  All that we need to say is, that no one should appear in this matter, without due consent and authorization”.

The registry, after citing the above paragraph, said as follows:

“In view of the observations of this Hon’ble Court as quoted hereinabove, there appears to be no reasonable cause to receive the instant application for registration.  I accordingly lodge the same under the provisions of Order XV Rule 5 of Supreme Court Rules, 2013.”

“The Registrar may refuse to receive a petition on the ground that it discloses no reasonable cause or is frivolous or contains scandalous matter but the petitioner may within fifteen days of the making of such order, appeal by way of motion, from such refusal to the Court.”

The passage from C.S. Karnan, which the registry relied on, clearly says it applies only for that case. And then the second line also says “this matter,” meaning the ruling is relevant only for that matter. Therefore, this can hardly be construed as a practice direction, let alone a binding law.

As the extracted Order XV Rule 5 states, the applicants have an option to appeal against the registry’s refusal to receive the application. But given that judgment has been reserved in the case, the 16 civil society activists have been effectively deprived of the remedy provided under the rules.  If the remedy has to be effective, the bench ought not to have reserved its order on Wednesday, but waited for 15 days to lapse from Tuesday.

They were the vice-chairperson of the Hindustan Times, Shobhna Bhartiya, the executive managing editor of Times of India, the late Dilip Padgaonkar, the editor-in-chief of Indian Express, Shekhar Gupta, the editor of Outlook, the late Vinod Mehta, the resident editor of Punjab Kesri, Ashwani Chopra and columnist and Rajya Sabha member, the late Kuldip Nayar.

The editors’ intervention resulted in the court’s modifying its order by allowing media coverage of the proceedings.

The six editors clarified that they did not wish to defend the article published in Wah India or contest the contempt petition.  Ultimately, the editor-in-chief of Wah India, Madhu Trehan tendered an unconditional and unqualified apology and expressed deep regret for the article found contemptuous by the court.

The factual matrix of the Wah India case is of course different from that of the current case in the Supreme Court involving Prashant Bhushan.

But the Delhi high court in Wah India case had no difficulty in accepting the impleadment application of the six editors  in the contempt proceedings, and in conceding their plea.

Similarly, the plea of the 16 civil society activists that the proceedings against Prashant Bhushan have a chilling effect on their right to exercise freedom of expression could not have been dismissed by the registry by an incorrect reading of the Supreme Court’s ruling in C.S. Karnan.